For a while I've been trying to come up with a good way to track casualties in Black Powder. I don't want to use dice or counters because I want something that won't detract from the look of the game, which is important. What I ended up doing was making bases the same size as my infantry bases, but with 4 figures on them. Between one and four of the figures was fleeing or wounded. This way I had bases to represent one, two, three, or four casualties. You can see some of them in my previous post on 10mm Confederate Infantry Casualty Bases.

There are a few problems with this system that make it impractical. First, it is inconvenient to have to switch out bases in a game as units take casualties and rally to remove them. Second, it isn't that easy to tell at a glance how many casualties a unit has, not to mention how easy it is to miss the base and forget to move it with the unit. Finally, it requires creating a huge number of bases, since theoretically for each unit I make I'd need three wound bases (since the standard stamina of a unit in Black Powder is 3).

I finally came up with another solution that I think will work much better. Initially I thought it would be nice to have round wound bases with a dial in them that can be rotated to show a different number of wounds. Unfortunately, I couldn't find dial bases anywhere that were thin enough to not look ridiculous next to my units on their thin metal bases.

What I did was take some magnetic sheet that I already had, which I use to make movement trays for the units, and cut them out to the same size as an individual infantry base. In my case this is 3/4" by 3/4". In Microsoft Paint I created an image of a green square that same size, and added numbers in white on each side facing out. I copied this image many times, then printed it out, cut out the squares, and super glued them to the magnetic side of my cut out magnetic sheet squares.

Then with some small bolt cutters, I cut a small notch out of one side of a bunch of my square metal bases. I did this by cutting two straight lines the right distance in from the edge, then using a small pliers to bend the tab back and forth until it broke off. After this I had to use the pliers to flatten out the base again, because it got very bent when cutting it. I probably should have come up with a better way to re-flatten them, since some ended up still a little bent. After that, I also took a metal file to them to file off the rough edges and get the notch to the right size so that when put on top of my magnetic square with the number, the numbers would just show through the notch.

After that, I just had to take all the figures off my previous casualty bases and put them on the new ones with the notches, and re-flock them all. Here you can see a couple of the figure bases next to the magnetic sheets with the numbers. 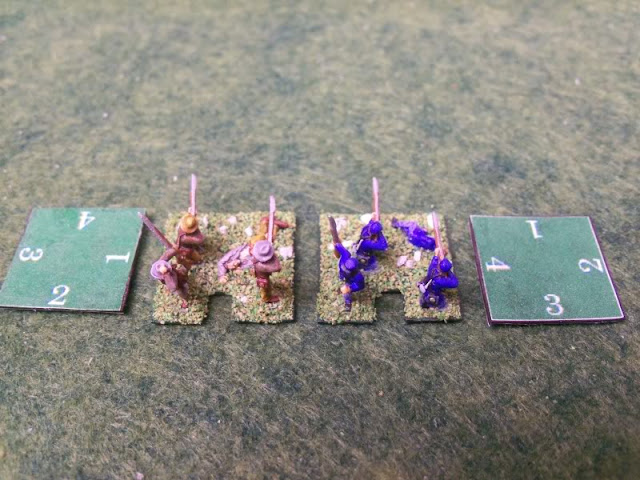 And here they are put together. Now instead of having to switch out bases, all you need to do to change the number of casualties is rotate the magnetic square on the bottom to the right number. It's easy to spot the number even from a distance, but is small enough to not be very obtrusive. So these should end up being much more practical to game with, without hurting the appearance of the game much. 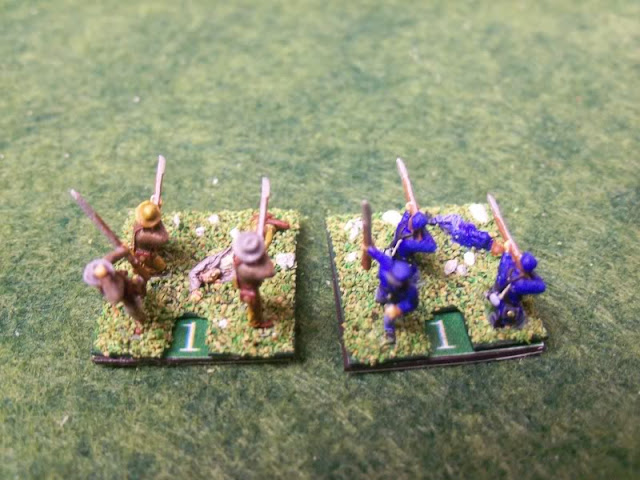 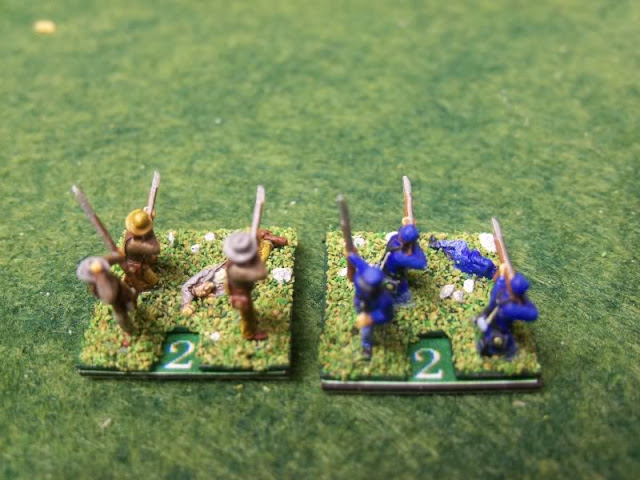 And here is a couple of shots of all the casualty bases I created, enough for two full brigades for each side. Now I need to get another game of Black Powder in so I can try them out! 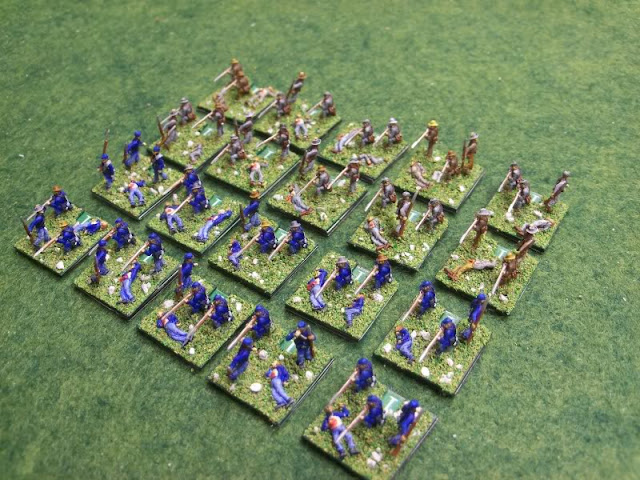 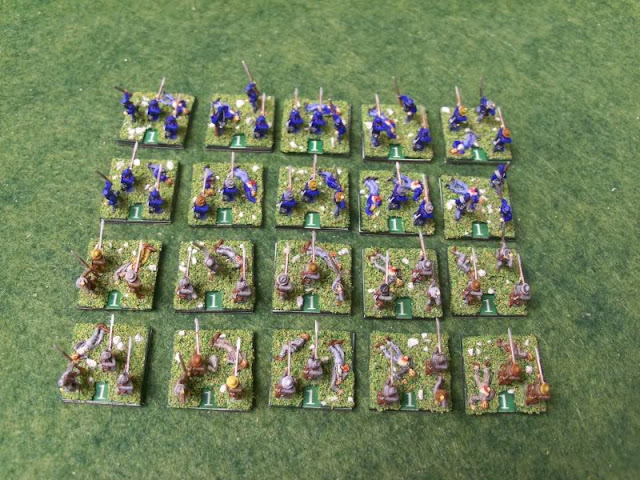