Some members of my usual gaming group recently played in a three-way game of Warhammer Fantasy using the Clash of Scouts scenario I had devised. The game ended up being a lot of fun, and the multi-side rules worked out pretty well, though there were a few oddities having to do with the effects of spells that last a certain amount of time or that remain in play, such as Drain Magic. The changes do seem to make for a very different game where you have to play ahead a lot more, so it takes some getting used to, but it turned out fun.

The Dwarf player got first deployment choice, and the Warriors of Chaos player second. They chose long board edges. The High Elf player was left with one of the short board edges, and to add insult to injury, he didn't have a single unit that was allowed to deploy at the start of the game.

The one unit of Dwarfs with their general took up position with the buildings on one flank, and their gyrocopter to their other. Two fast-moving units of cavalry moved ahead in a pincer movement around both sides of the Dwarfs, Marauder Horsemen to their right and High Elf Reavers to their left. 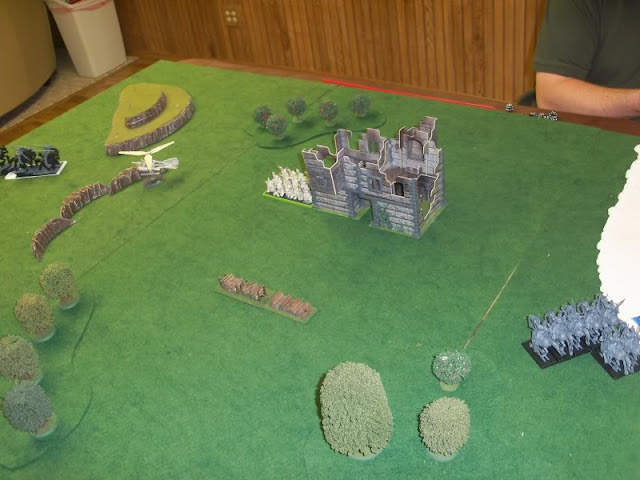 The Dwarfs had wisely sent several small units of Miners to spread out, and they now converged on the developing battlefield from all directions. A unit of Dwarf Thunderers also arrived. At the same time, two large and imposing units of High Elf spearmen arrived along the river bank, as did an entire army of chaos, including a unit of Warriors, a unit of Knights led by their general, and two large units of Marauders. The Marauder Horsemen and High Elf Reavers continued their attempts to get around into the rear of the Dwarf General's unit. 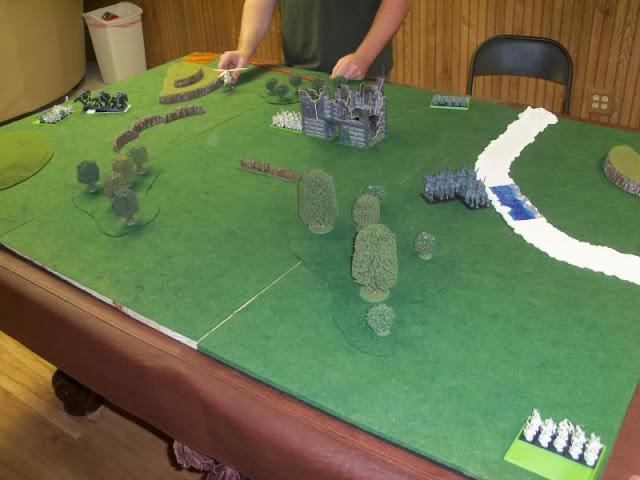 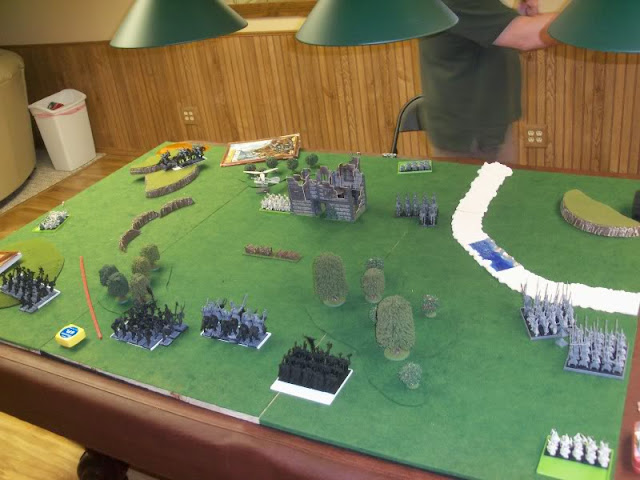 The Dwarfs mostly held their positions, and another unit of Thunderers arrived on the opposite side of the stream. The High Elf Reavers on the Dwarf's left flank attempted to charge the Thunderers in front of them, but the vicious closing fire from the Dwarf firearms panicked them and a subsequent volley all but wiped them out. The unit of Marauder Horsemen on the Dwarf right flank turned around to face the Miners led by a hero who had appeared behind them. The rest of the Chaos army, including a newly arrived unit of Khorne Knights, advanced in a wide arc. The two High Elf Spearman units held their positions and waited as reinforcements arrived in the form of two Bolt Throwers, a Chariot, and a level 2 Mage. 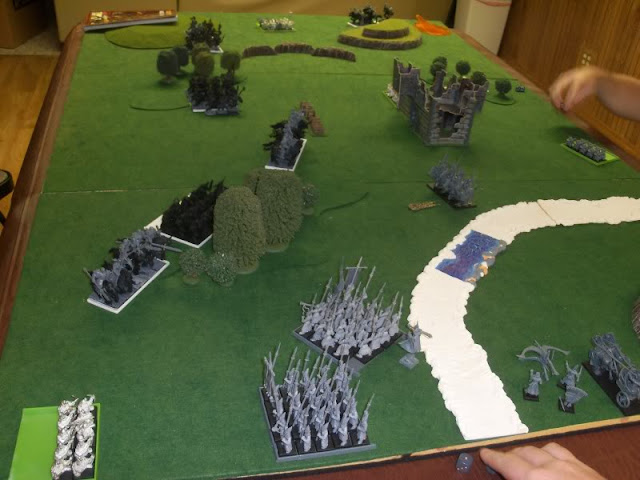 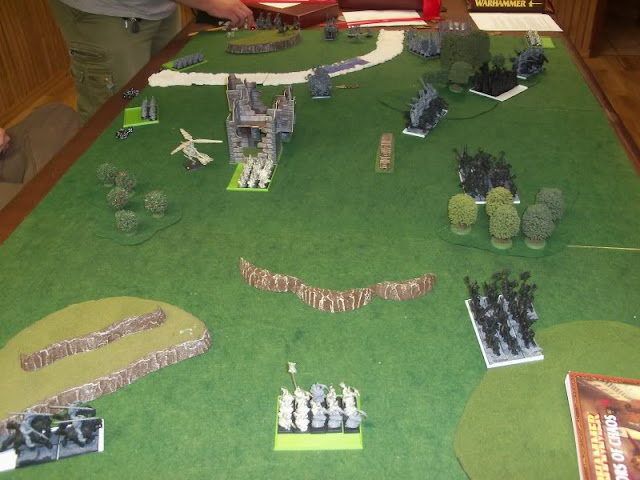 The Dwarfs again mostly held their positions, as they were dangerously spread out, though the Gyrocopter positioned itself to pepper an advancing unit of Marauders with lead. While the others cautiously held their positions, the impatient Warriors of Chaos sprung at their enemies. The Khorne Knights charged the flank of and Elf Spearman unit, but killed very few of the Elves. In the center, Marauders and Knights advanced on the Dwarf general, and the Chaos Sorcerer unleashed a horrifying curse on his bodyguards that caused them to slaughter each other. On the Chaos left flank, Marauder Horsemen and infantry managed to surround a unit of Miners led by a hero and charge them from both sides, but the stalwart Dwarfs fought back heroically and the combat was a stalemate. 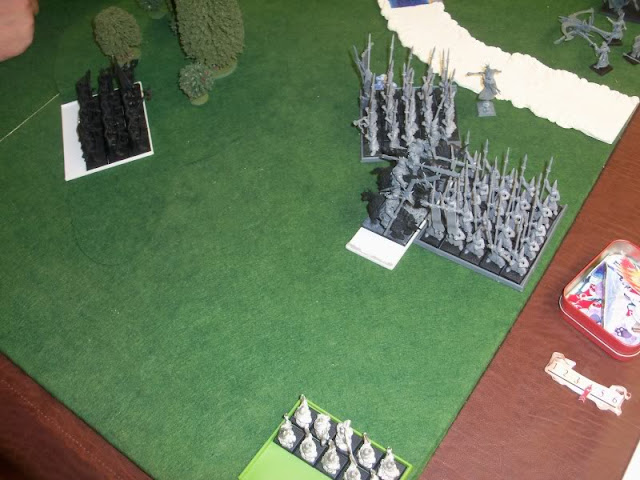 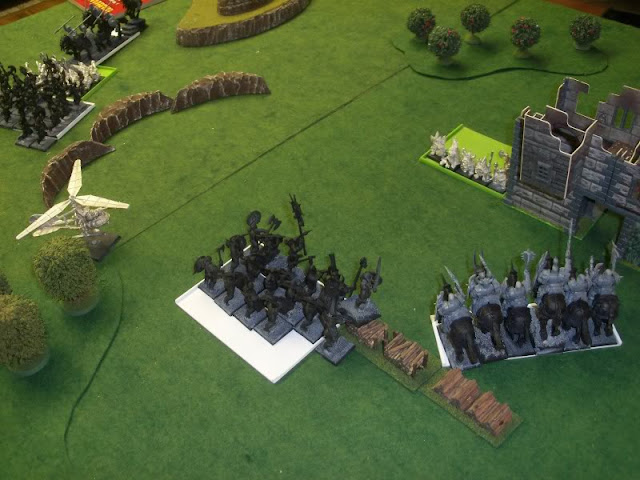 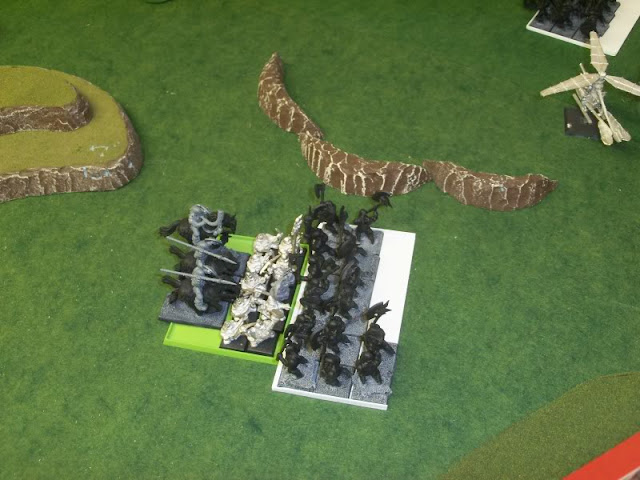 In the center, the Marauders attempted to charge the Dwarf General and his few remaining bodyguard, but with their numbers depleted so greatly by foul sorcery, they chose to flee and the Marauders could not reach them. This set up a perfect shot from the Gyrocopter, whose gun scythed down an entire rank of the Marauders. The High Elves turned their attentions to the small unit of Thunderers that had been cautiously advancing toward them on the Dwarf left across the stream. The High Elves fired both of the Repeater Bolt Throwers at them as well as turning their chariot to face them, in a display of force seemingly disproportionate to the threat. The Chaos Warriors unit charged the front of the other unit of High Elf Spearmen and also didn't do much damage. At the same time, the Chaos Knights next to them lost all but one of their number, who wisely fled from the forest of Elf spear tips. On the other side of the battle, the Dwarf Miners finished off the Marauder Horsemen to their rear and fought ferociously against the Marauders to their front. Though they were down two just four miners and the hero, they had managed another draw. 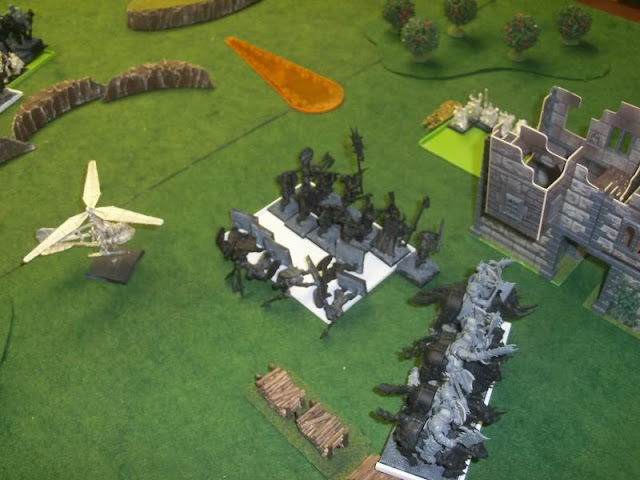 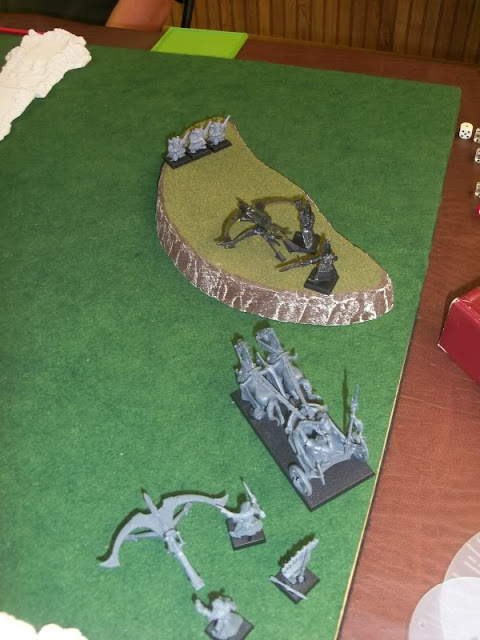 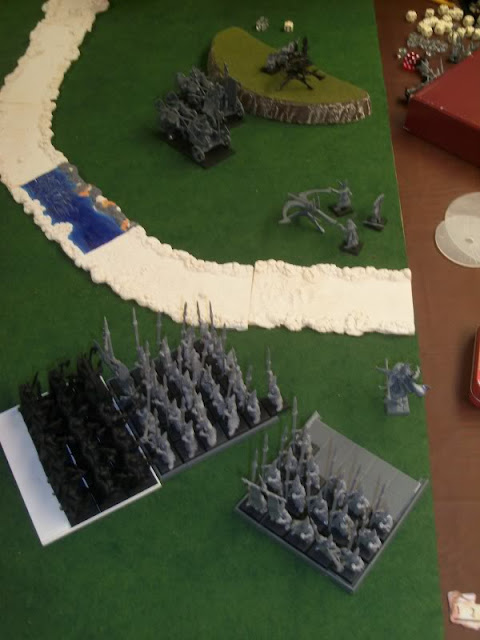 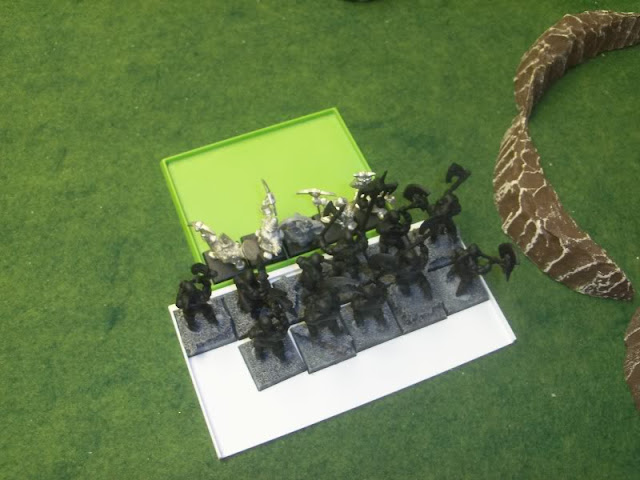 In the continuing combat, the Marauders cut down the remaining Miners with their brutally large great weapons, and only the lone Dwarf hero remained. On the Dwarf left across the stream, the three remaining Thunderers, thirsting to avenge their fallen comrades, charged the nearest High Elf Bolt Thrower. They killed one of the Elves, and the other fled, which panicked the nearby Chariot, which attempted to flee across the stream and in their careless haste wrecked their chariot on the rocky banks. 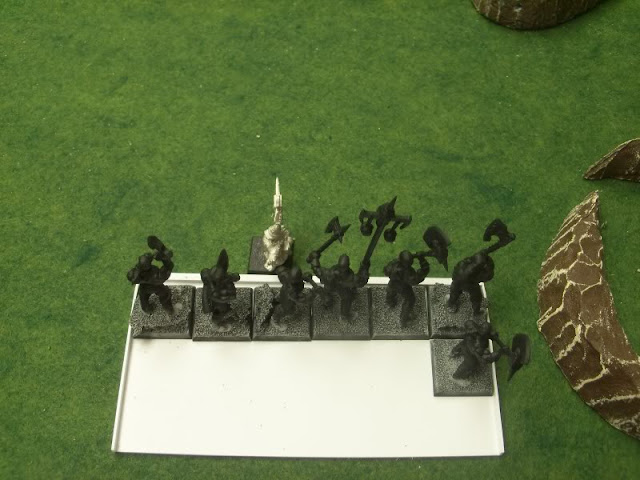 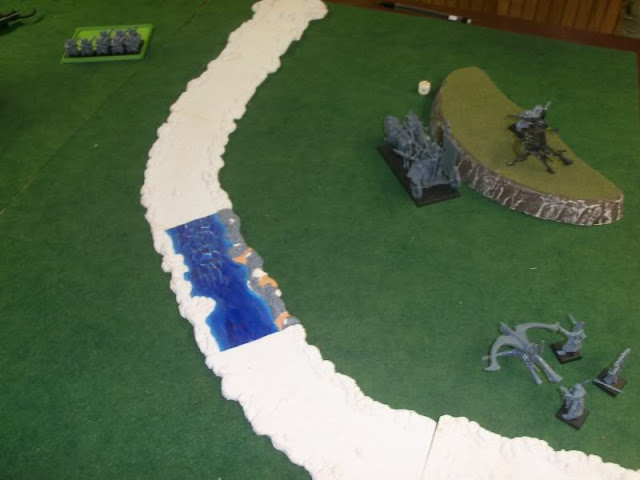 That turned out to be the final turn of the game. The Dwarfs barely held on for a victory, with one table section contested by the single hero in combat with the Marauders, and another by the two remaining Thunderers. But their tactic of having small units spread out all over the battlefield had paid off. Most of the Chaos army was broken or depleted, and the High Elves just didn't have much of a foothold on the battlefield. So the High Elves and Warriors of Chaos were forced to pull back and leave the field to the Dwarf scouts who, having driven off the enemy scouts, were free to search for the fabled treasure unmolested.
Posted by Craig Welter at 8:00 AM