Byron Manfred and his wight king companion each carry two pieces of the Gaunt Summoner's shattered amulet. Together, they are half-way toward completing their quest and learning the Gaunt Summoner's true name, thereby gaining power over him. As they traverse the silver tower, searching for their next trial, they find themselves in a part of the tower where the air seems a little clearer, and the light a little brighter. Strangely, as they traverse this part of the tower, their surroundings only seem to become more sublime and heavenly with each passing day.

Here they meet a towering human who appears to be a priest of Sigmar, though clearly not a native of Sigmar's lands. The priest has a loyal but very strange looking animal companion with him. Byron keeps his questions to himself, but is immediately suspicious that this strange follower of Sigmar is willing to even converse with a necromancer. However, Byron reasons, the silver tower has undoubtedly made for some extraordinary alliances in the past, and perhaps this warpriest was willing to accept such company in order to search for a way out. And, after all, Byron has no way of knowing how long he has been imprisoned in this accursed tower, or what might have transpired outside of it in his absence.

They agree to explore together for a time for mutual protection. They soon discover shifting corridors which seem bereft of monsters. Cresting a flight of obsidian steps studded with star-like diamonds, the champions find themselves before a yawning portal of heavenly light. Golden statues of strangely armored knights flank the portal, and around their feet lay the blackened corpses of acolytes and beastmen by the score. The warpriest expresses his hope that this portal will lead him to the realm of heavens, which causes Byron to fear the priest might be delusional. Byron knows that whatever lay beyond the portal is surely of the Gaunt Summoner's devising, yet they all sense that their destinies lie ahead. They step through the portal and find themselves in a small chamber with a single exit. 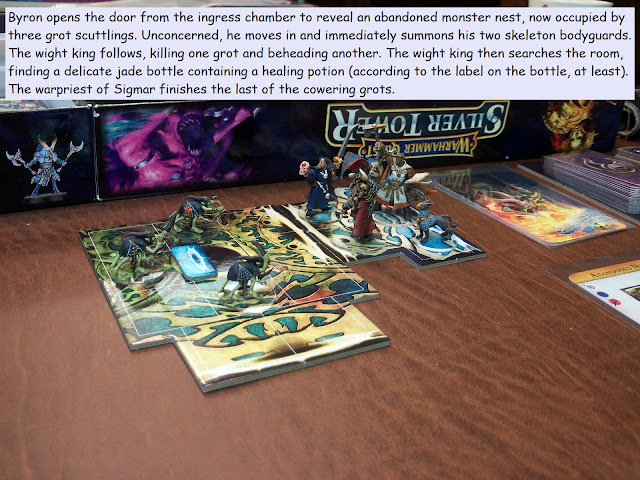 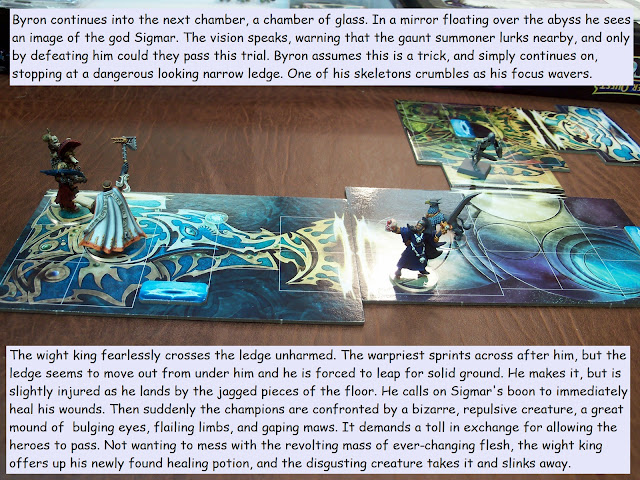 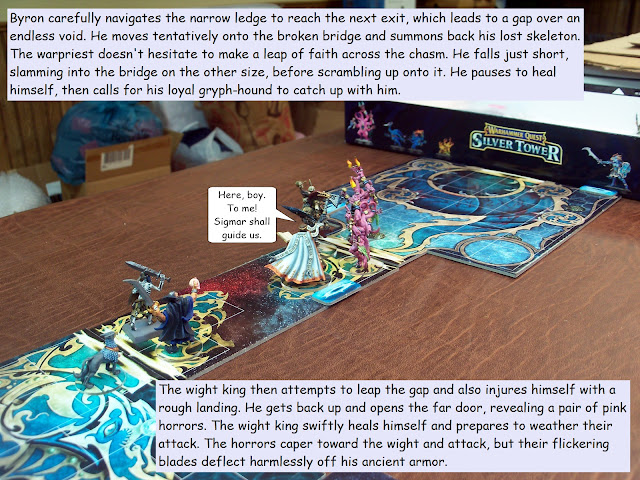 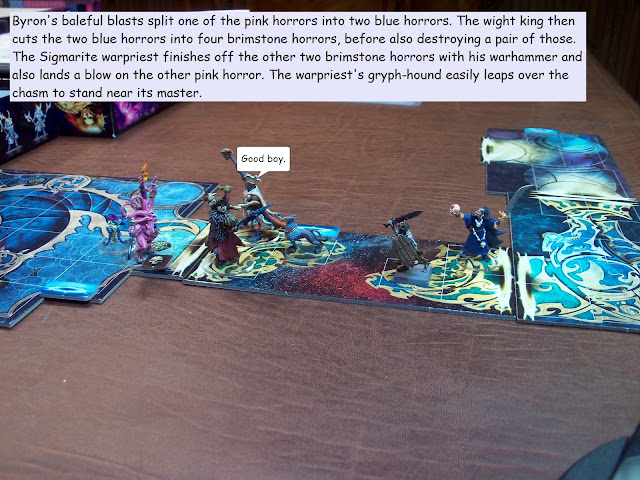 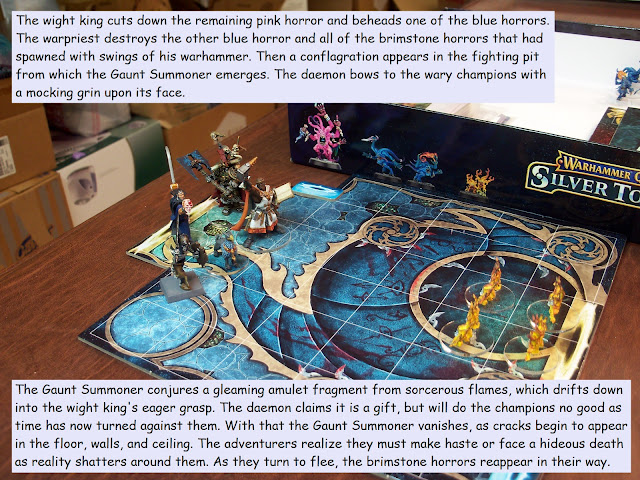 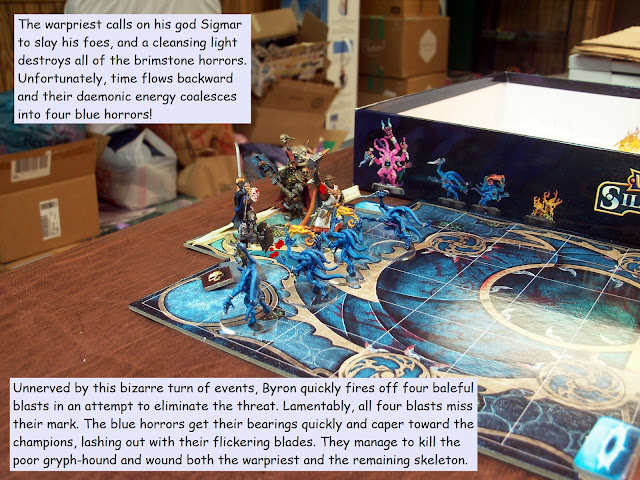 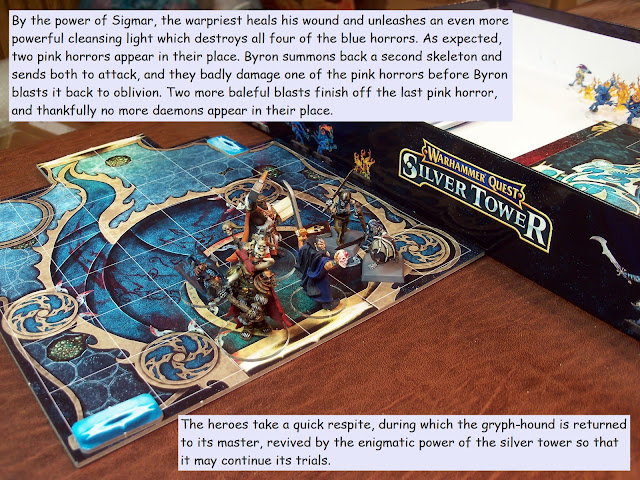 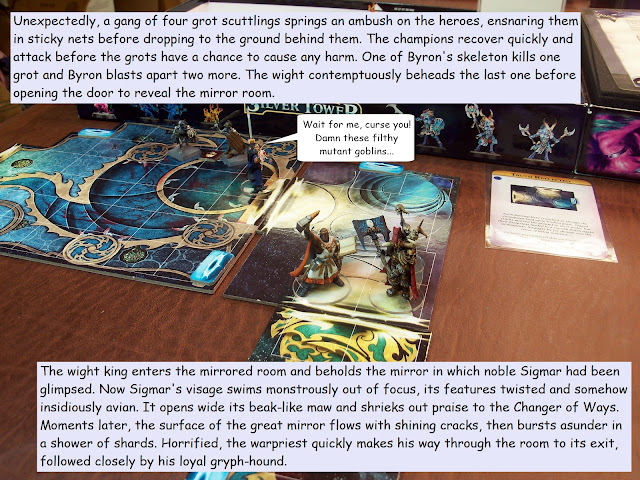 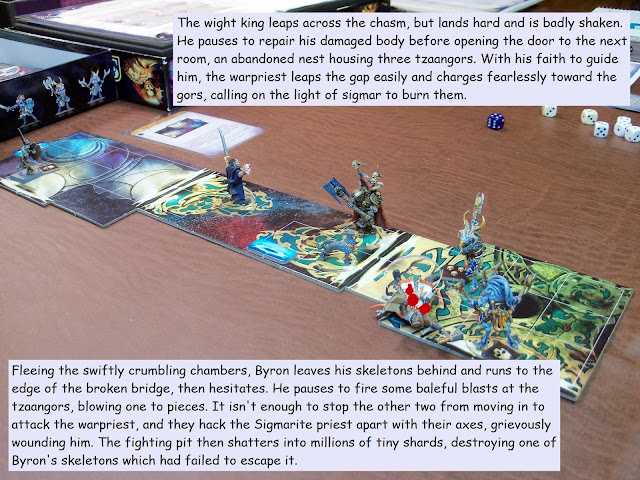 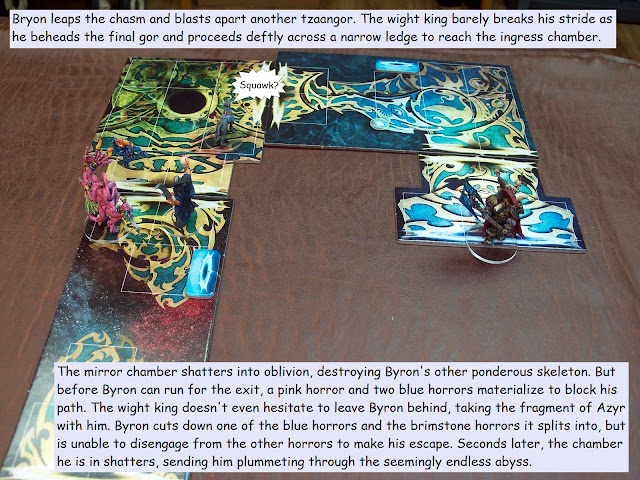 The wight king can hear the shattering chambers and Byron's screams behind him as he walks out of the ingress chamber to find himself in a completely different part of the silver tower. He quickly turns to look back, but through the doorway there is only nothingness. The wight king has no way of knowing if Byron still lives, or more importantly what has become of the amulet fragments he was carrying. The ancient wight king pauses, standing as still as a statue, as he ponders how best to proceed.
Posted by Craig Welter at 8:00 AM