After already suffering the complete destruction of one of the Beastman armies, the forces of evil were a little reluctant to be aggressive. The Beastman Lord, having witnessed the nearby destruction of one of his armies, led his 1st Army back towards the safety of their camp, and away from the rampaging Bretonnian 2nd Army. Meanwhile, the Beastman 3rd Army, having plundered Soude, moved South towards Chateaux D'if but did not reach it.

The Lord of the Vampire Counts army, the shadowy figure known only as The Master, left the 1st Army and joined his 3rd Army to confer with his generals. The 1st Army then moved West towards St. Mer-Eglise, hoping to draw the attention of the nearby Bretonnian 2nd Army. 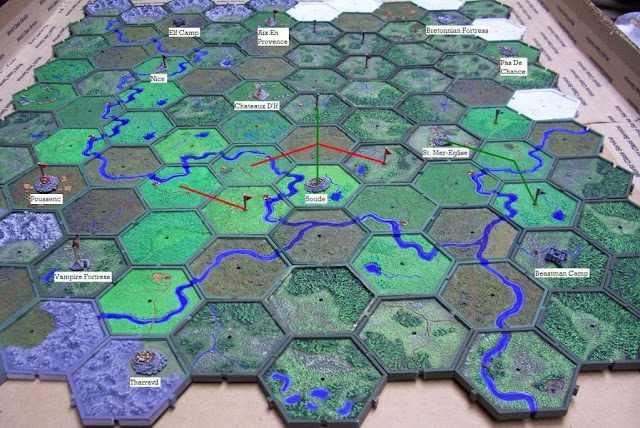 The side of good once again acted decisively. The High Elf 2nd Army advanced from Nice, up the river bank towards the Vampire Counts 2nd Army, occupying Poussenc. The High Elf 1st and 3rd Armies both moved Northwards. The 3rd Army occupied the village of Chateaux D'If, setting up another link in their support and supply chain. At the same time, the High Elf 1st Army, led by Prince Finduleas Tethelion atop his mighty Dragon, attacked the Beastman 3rd Army to clear them away from the outskirts of the village while the 3rd Army moved to occupy it.

The Bretonnian 3rd Army moved far to the North to support Prince Tethelion's advance. The Bretonnian 1st only repositioned themselves slightly, not wanting to commit to battle just yet. But the Bretonnian 2nd Army charged right past the village of St. Mer-Eglise to attack the approaching Vampire Counts 1st Army. 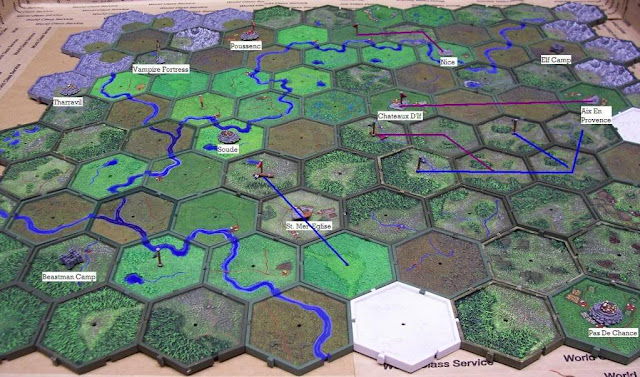 The Beastman 3rd Army, far ahead of any friendly forces, was no match for the High Elf Lord on a dragon and his loyal bodyguard, supported by nearby friendly armies. The Beastman 3rd Army was completely massacred, and any survivors scattered. It wasn't looking good for the invaders, but the Vampire Counts 1st Army, positioned in the open between Soude and St. Mer-Eglise, managed a solid victory against the attacking Bretonnian 2nd Army. The surviving Bretonnians fled to the South. 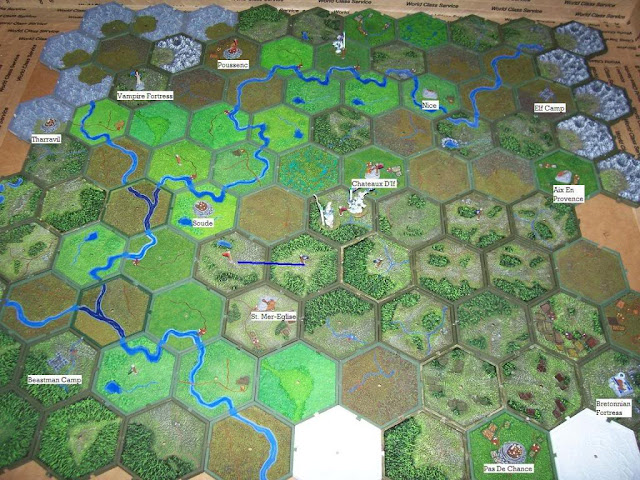