The Setup
This battle was the grand finale of a planned 3-part mini-campaign between my Tyranids of Hive Fleet Maturin, and some Orks who have taken over an entire continent on an Imperial world. You can read the battle reports for the first two games by clicking on the following links: Part 1 Part 2

This final battle in the campaign would represent the assault against the coastal defenses of Fortress Antorktica. We played it as a Planetstrike game, using the mission where there is one objective in the center of the table, and the attacker had to control it at the end of the game. This seemed like a good way to represent an attempt to punch a hole through the Ork coastal defenses.
We played with 4000 points per side, and two players on each side. Obviously the Tyranids were the attacker. Because the Orks lost the first two games of the campaign, they would be forced to re-roll all successful reserve rolls for the entire game due to their reinforcements being intercepted by infiltrating Tyranids. This would prove to be crucial.

As part of the mission, the Ork army was required to split in half, with one half of the army deployed at the start, and the other in reserve. With two players each having 2000 points of Orks, we just split their army along those lines. So one player deployed all of his Orks at the start. Below you can see the initial positions of the Ork defenders. The two-story Bastion in the center of the table was the objective. 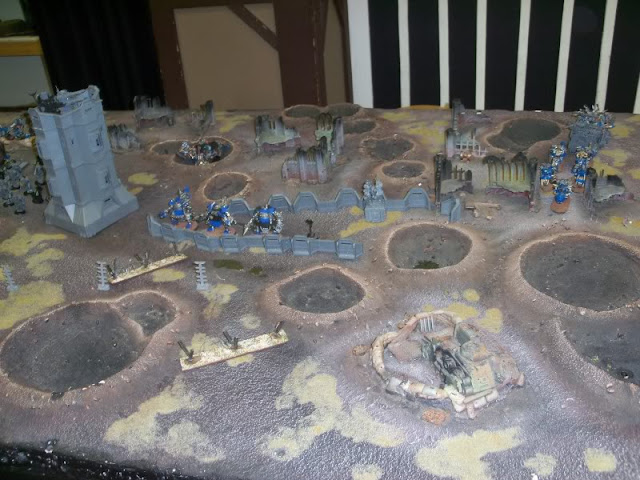 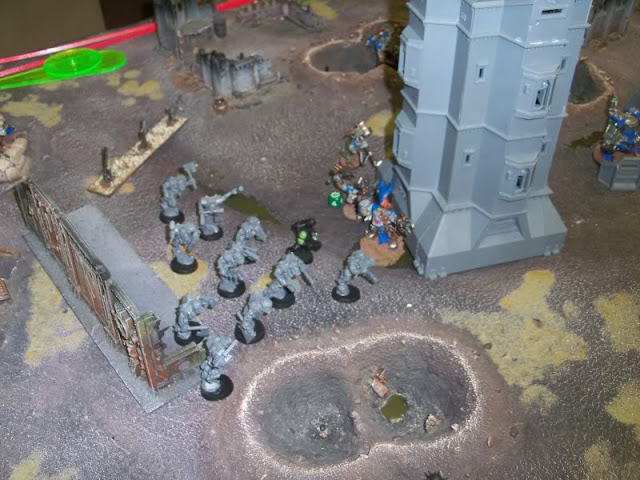 The Story
The Tyranids of Hive Fleet Maturin are conducting a full scale invasion of an Imperial world designated 18-D93. Having completely secured and cleared the land mass they made planetfall on, they are now ready to move on to other continents. First on the list is Fortress Antorktica. The entire continent has been fortified by the Orks who had previously captured it from the Imperial forces. Now the Tyranids would have to break through the defenses on the coast in order to reach the population centers of the Ork-held continent.

To support the landing, the Tyranids have already sent infiltrating forces to take out the Ork artillery and Ork reinforcements that are positioned to support the area they intend to attack. The Tyranids are now sending a massive force against the weak point in the Ork coastal defensive line, which is isolated and unsupported.

Hearing reports of the Tyranid infiltrators, the Orks aren't caught completely unaware. At the last minute they are able to deploy a force field right across the front of the Tyranids path to their objective. This would disrupt the Tyranid advance as they struggled to capture the massive Bastion that commands this part of the Ork defenses.

The Tyranids managed to implements some clever stratagems of their own, however. By attacking in darkness before dawn, they would limit the effectiveness of the Ork firepower as they approached the objective. They also managed to convince (mostly through the judicious use of brain slugs) the huge unit of Ork boyz with their warboss, who had been garrisoning the Bastion, to instead trade places with the Lootas over on the Ork right. This left the Bastion much more vulnerable to assault, and also put the huge Ork mob much closer to the advancing Tyranids.

As the Tyranids crept forward unnoticed in the darkness, their appearance was eventually announced by their bombardment of the Ork defenses. Little damage was done, but the attack did kill several Nobz and Stormboyz, and pinned the Nob unit containing the second Warboss, who huddled for cover next to the Bastion. There were now few defenders around the Bastion to stop the massive Tryanid onslaught.

Tyranid Turn 1
With incredible precision, nearly the entire Tyranid army sprung forward at the exact moment in a wall of alien menace. The right half of the Tyranid line was entirely composed of an unbroken wall of Genestealers. The left was a mix of Gaunts, Genestealers, and Tyranid Warriors, with a Hive Tyrant near the center. All surged forwards. At the same moment, a Trygon burst through the ground right behind the Nobz and Stormboyz next to the Bastion. 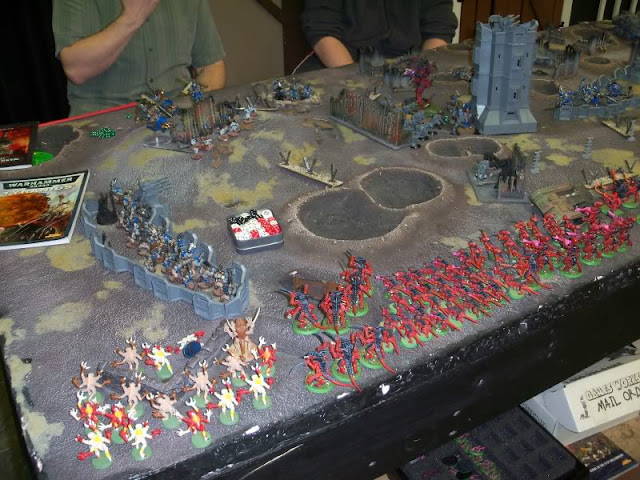 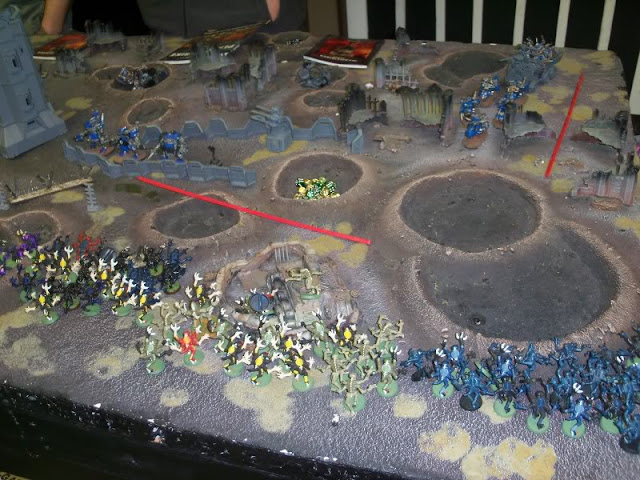 The left of the Tyranid line saw a lot of action. Hormagaunts poured into the nearby ruined building to clear it of Ork Burna Boyz. The Trygon tore apart all but one of the Stormboyz, but was wounded five times in the struggle. On the far left, 20 Genestealers leaped over the barricaded to assault the huge unit of Boyz who had been displaced from the Bastion. The Boyz had numbers and cover on their side, and a brutal melee ensued. By the end the Genestealers had made their way inside the defenses and were clearly gaining the upper hand, but the Ork Boyz refused to break. 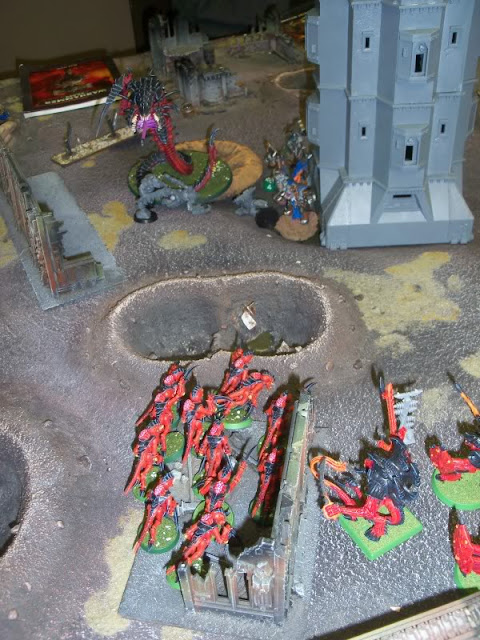 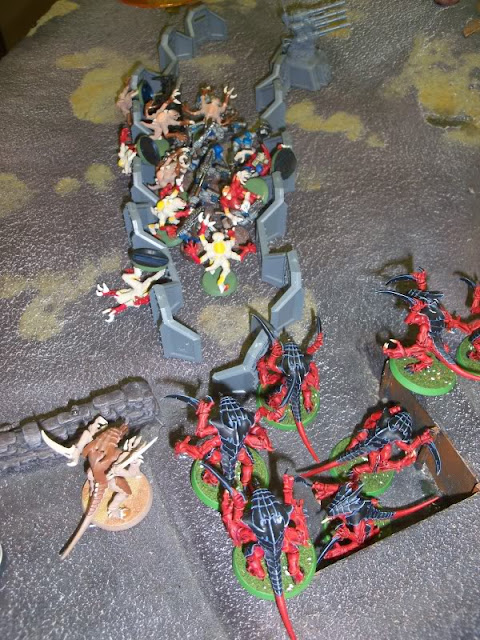 Ork Turn 1
At this point, the Orks sprung their cunnin' plan! Half of their army had hidden in covered trenches on the beach, ready to emerge in the midst of the Tryanid attackers to stage a devastating counter-attack! Unfortunately, without the benefit of a Hive Mind, they were unable to coordinate quite as well as the Tyranids. Instead of all of them emerging at once, only a unit of Stormboyz and 6 mega-armored Nobz with a Warboss emerged. It still proved to be an effective counter punch. Wisely targeting the Tyranid synapse creatures, the Stormboyz killed a Tyranid prime and all but one of the left-most unit of Tyranid Warriors. The Nobz easily wiped out an entire unit of Tyranid Warriors closer to the center. On the plus side for the Tyranids, the Genestealers on the left finished off the remaining Boyz and Warboss who defended the defensive barricades. 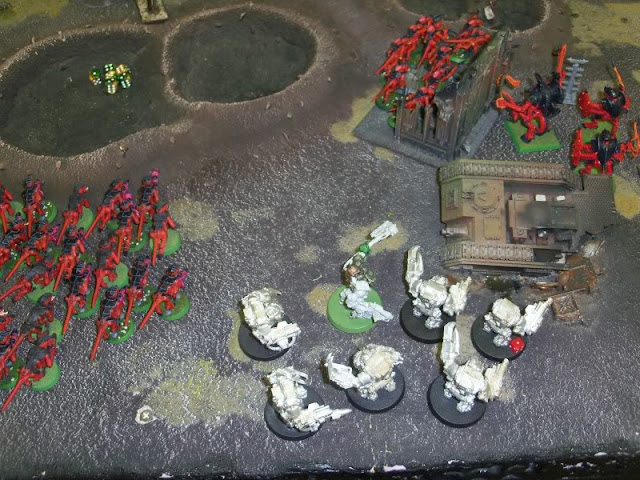 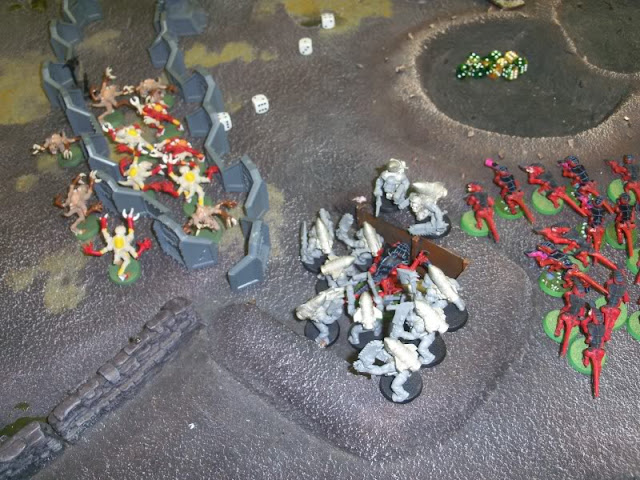 Tyranid Turn 2
Now freed up, the Genestealers on the left came to the aid of the one surviving Tyranid Warrior, and easily wiped out the remaining Stormboyz. In the center, more Tyranid reinforcements turned up right behind the recently-emerged Mega-Armored Nobz, in the form of THREE Carnifexes. Sandwiched between the three charging behemoths, the Nobz stood no chance. The Trygon, badly wounded and on it's last legs (so to speak), charged the Warboss next to the Bastion. The Trygon just managed to kill the Ork Warboss before being finished off by his loyal Nobz. 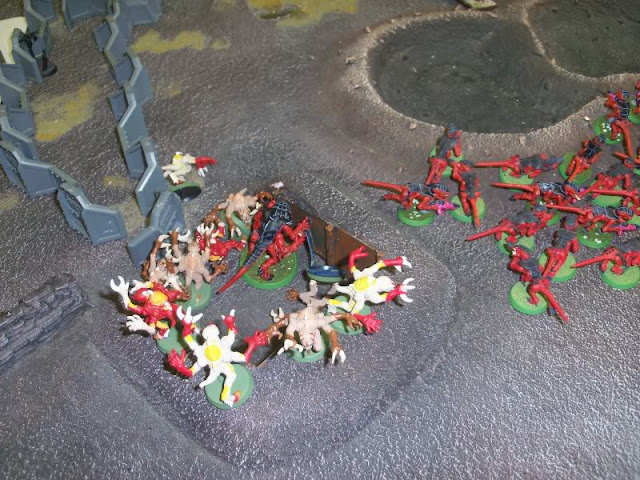 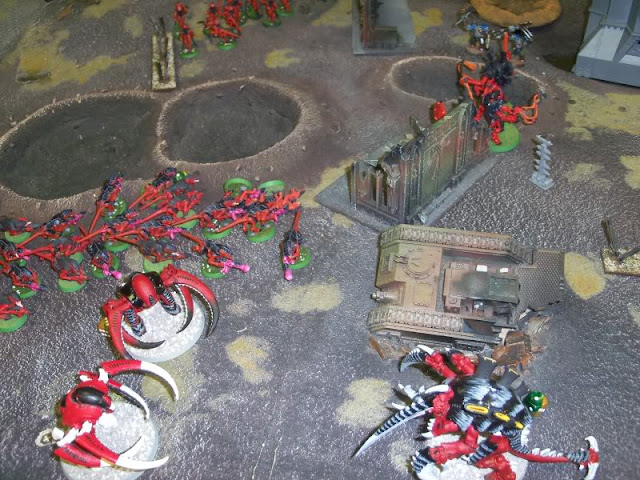 On the Tyranid right, a large unit of Genestealers charged forward to swarm a unit of Ork bikers, easily destroying them all, but leaving themselves dangerously close to a truck full of Ork reinforcements. 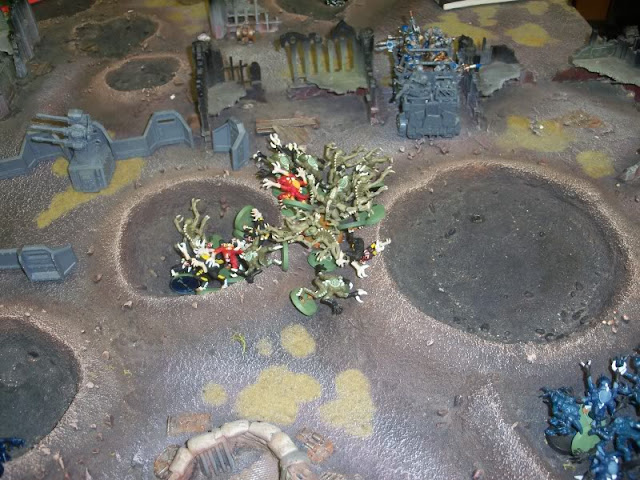 Ork Turn 2
Seeing Hormagaunts bounding towards them, the Grot artillery opened fire, blasting apart all but two of the beasts, though thanks to the influence of the Hive Mind the two survivors kept coming. In the center, another unit of Orks sprung from the sand right behind some Zoanthropes who had just arrived. They charged and hacked the hapless Tyranids to pieces. 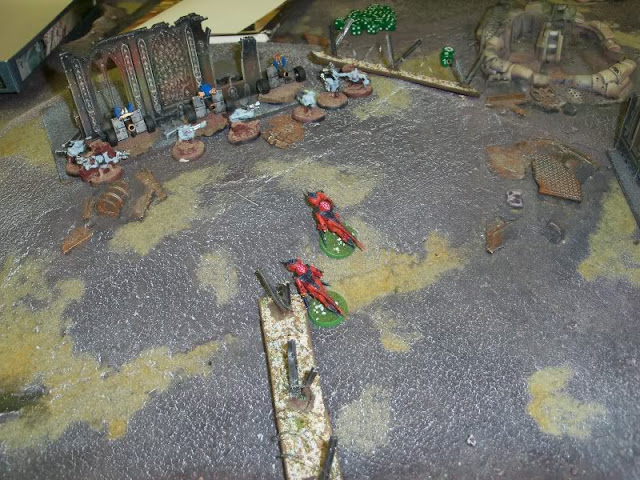 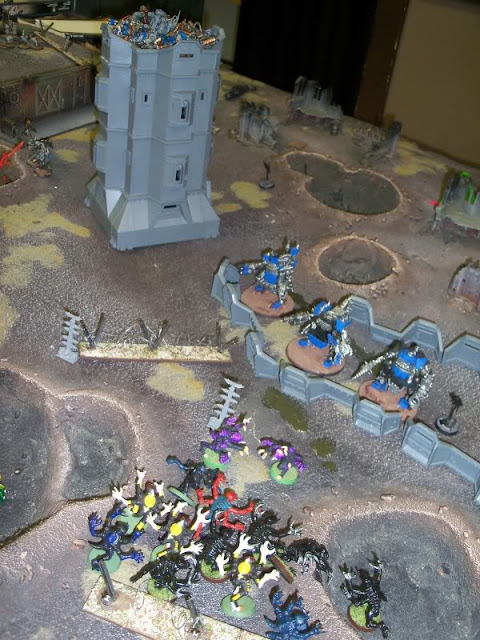 Tyranid Turn 3
The Genestealers who had been shot by the Killa Kans charged forward for revenge. Two of the Kans were destroyed, the explosion of one of them killing more Genestealers than it would have in combat. One Killa Kan survived to continue on the fight as the remaining Genestealers swarmed around it. 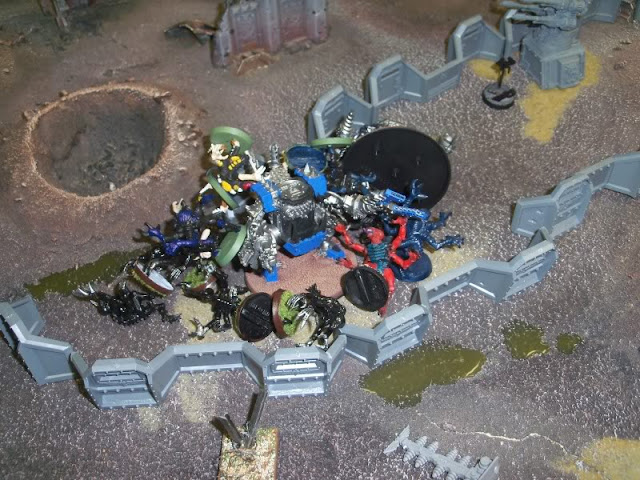 Having cleared most resistance, the Tyranid army continued to advance. The two remaining Hormagaunts avenged their brothers by slaughtering the Grot artillery crew before returning to synapse range of the last Tyranid Warrior. At this point, the Flying Hive Tyrant arrived from reserve, landing right next to the Bastion objective and immediately assaulting, right at the same time the other Hive Tyrant reached the objective. The two Hive Tyrants combined had no trouble destroying the Bastion. All that remained was to clear the few surviving Orks from the rubble. 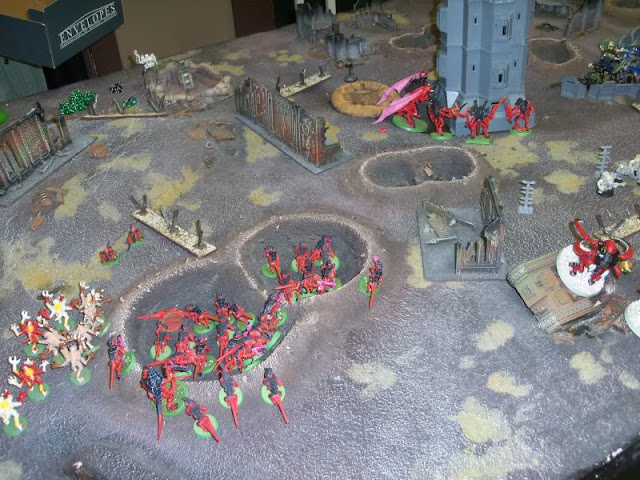 On the Tyranid right, the Genestealers were easily handling the Orks who attacked them, with plenty of Genestealers to spare. 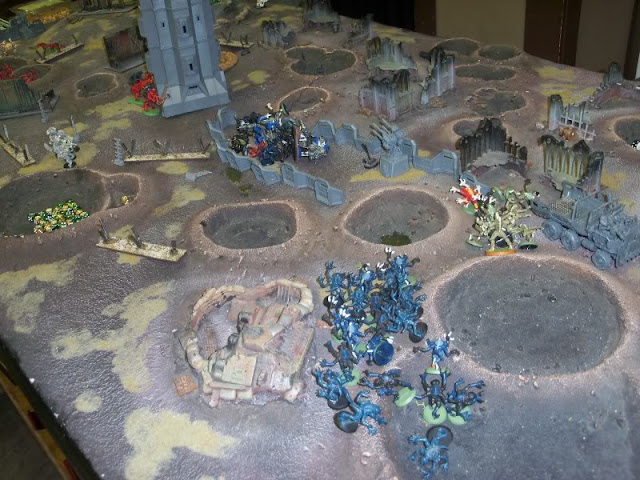 Ork Turn 3
On the Tyranid left, another Ork unit sprung it's trap from behind and took out the final remaining Tyranid Warrior and the huge unit of Termagants. Nothing much happened in the center. A unit of Orks stared powerlessly at the battered bastion, unable to pass through their own force field, while the Lootas had no intention of starting a fight with two Hive Tyrants. 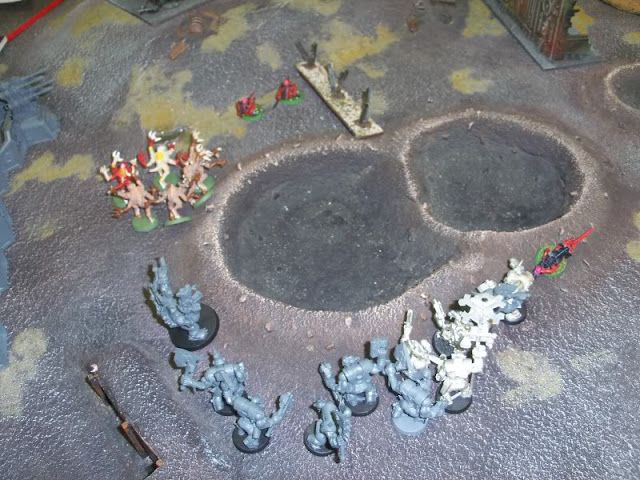 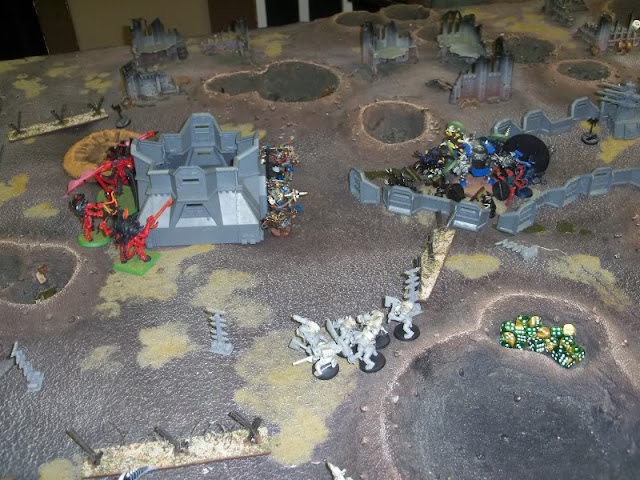 On the Tyranid right, suddenly a horde of Ork reinforcements arrived, some charging the nearest Genestealers, while other Orks shot at another unit of Genestealers. A bloody but inconclusive close combat ensued, but it was clear the Genestealers couldn't hold out indefinitely against such numbers. 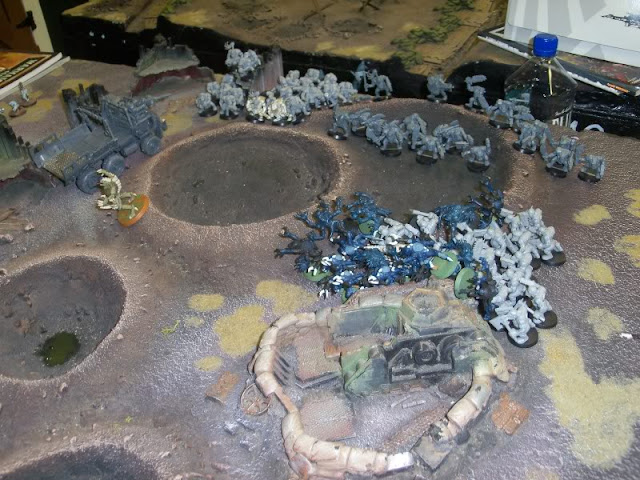 The Result
Sadly, we had to stop the game at this point because we had run out of time. It's too bad, because I would have liked to see if the Orks could make it to the Bastion, which still had two Hive Tyrants defending it, with two Carnifexes within a couple of turns of it as well. But other than that and a couple of Genestealer units, there wasn't much left of the Tyranid army, and the Orks had quite a few reinforcements just arriving. So I think we'll have to consider this one a draw. The Tyranids created a beachhead and gained a foothold by destroying the Bastion and scattering the defenders, but the Orks responded quickly enough to bog down the Tyranid attackers at that point, preventing them from pouring through the gap unopposed.
Posted by Craig Welter at 8:00 AM