I attended Games Day Chicago this past weekend. I had a good time, and it was a decent Games Day. They don't have much in the way of seminars anymore, since they are mostly pointless. But they did have Forgeworld and Black Library seminars, which I did not attend. Aside from that, there was a lot going on. Lots of Golden Daemon, Armies on Parade, and conversion contest entries to look at. Lots of open gaming tables to play on if you want to bring an army. And a lot of event games to play in. Most of those also required you to bring your own force, but some of them provided everything and you could just stop by and play.

There was also the on site Fantasy and 40k conversion contests, where they give you some sprues and you have an hour to convert something cool out of them. They were mostly chaos warrior and daemon sprues, but I did make a pretty cool Chaos Spawn, I think. There was the scenery make and take, where you could build and take home a small Cities of Death building, but it was so crowded all day, with people waiting in line to do it, that I didn't get a chance to get near it.

There were some guests from the design studio, and some guests from Black Library. I got some stuff signed by Gav Thrope, which was cool, and he seems like a nice guy. I enjoy his blog, and Crown of the Blood

, Path of the Warrior

, and Angels of Darkness

are all very good books which I would highly recommend. I wish I had stopped to talk with him a little more about some of the ideas in his books, but I didn't want to hold up the people waiting behind me.


Here's a video I took of one of the event game tables, which included real running water. I hadn't seen that done before. As always, Games Day had some impressive display tables and event game tables.


The giant Chainsword here was at the booth for the Space Marine video game. The game looks fun, though I didn't wait in line to play it, since I don't own a system it is being released on anyway. They also had set ups for playing the Dawn of War game, which I've never played. The giant boltgun was just brought by that guy I think. 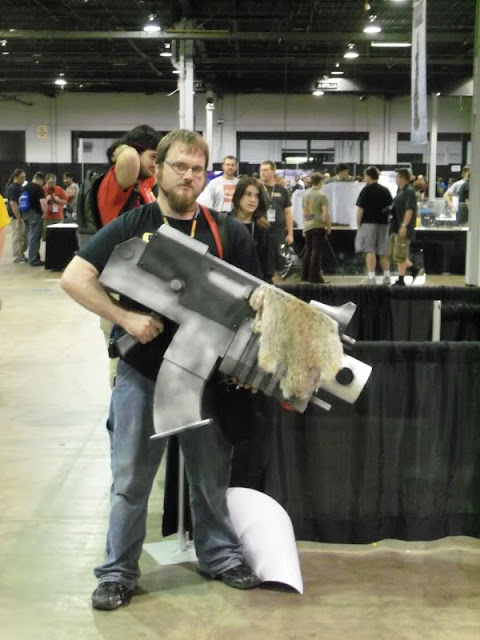 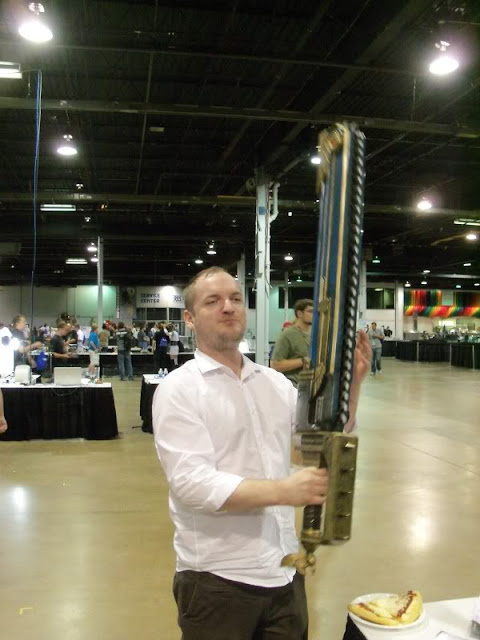 Here's a picture of the one event game I play in, which was a massive super-heavy tank battle pitting many (probably around 30?) Imperial Baneblades againts a similar number of Ork Super Heavy tanks. I didn't try to get a picture of the whole table, but it was huge. The rules were very simlified (each tank getting 4+ shots that hit on 4, and penetrated on 5+, then needing a 6 to do a structure point, 3-5 to lost one shot next turn, and 1-2 to not be able to move next turn). Each tank had 3 structure points, so I took a lot to do any damage. But as the game went on, the organizers made things more deadly but giving aerial bombardments to the side that could scream the loudest, and then eventually giving +1 to all rolls. The objectives were the landing pads, which could be held by being within 6" with no enemy tanks within 6". Anyway, it was a fun game. Mine was the green Baneblade charging forward on the left there. Unfortunately, things turned against the Imperials and we got completely crushed, with all the tanks on our side in my imediate area being destroyed by the end. 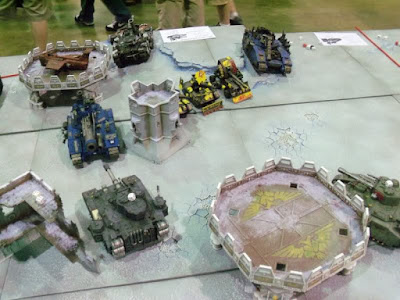 They had some new models there to show off, and I took some pictures of the new Zombie Dragon kit. It looks even more impressive in person. 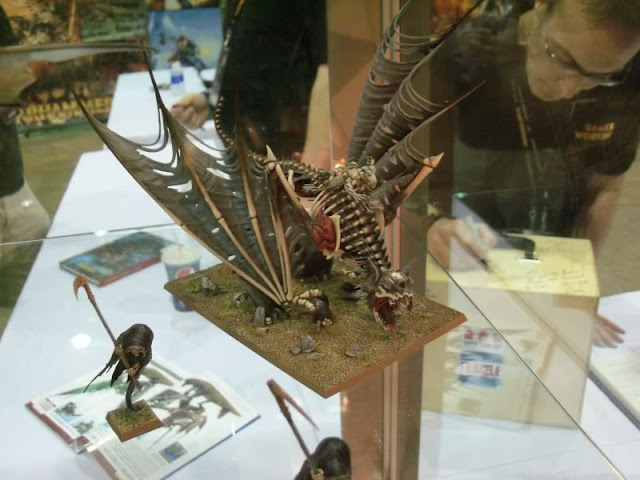 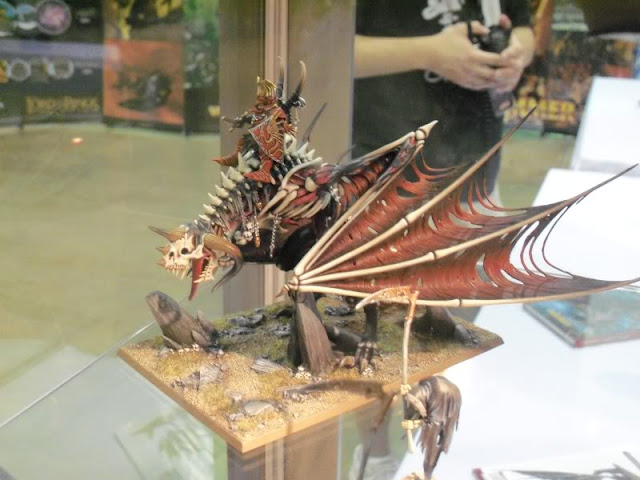 I have a couple of pictures of Golden Daemon entries, but it's very hard to get good pictures of them, since they are setting behind some plexiglass or something which is very scratched up. Between the glare and the reflections and the scratches, it's hard to take a good picture, so I only have a few that turned out well. I really liked that diorama of the TechMarine and Servitors working on the Dreadnaught. 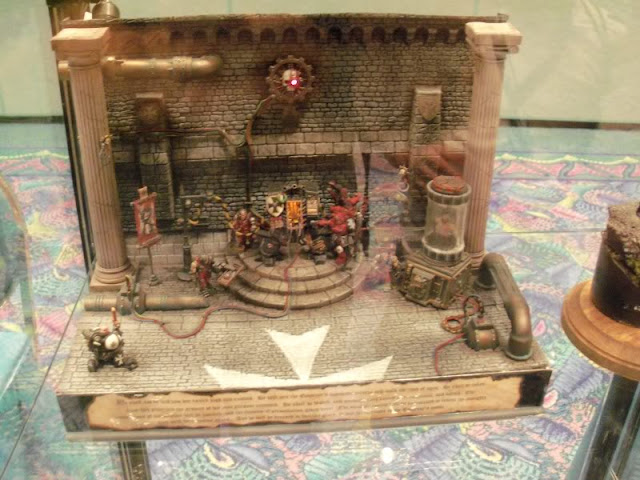 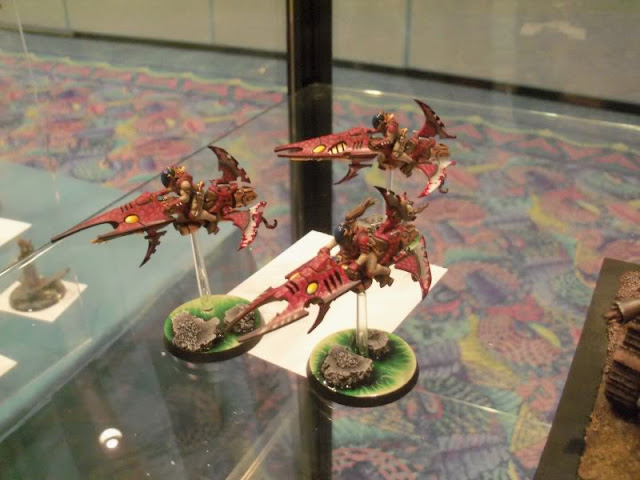 Lifesize Khorne Berzerker. There was actually a gun in there moving around, it wasn't just a statue. He was pretty terrifying. 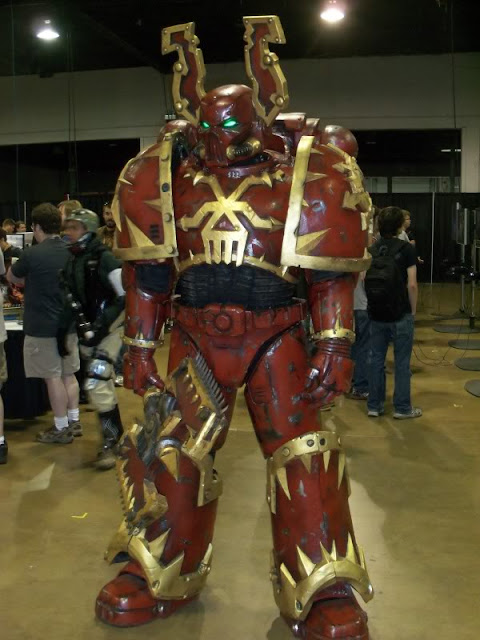 Here's one of the entrires in the monster conversion contest, which had some decent stuff, but nothing amazing. The vehicle conversion contest, on the other hand, had one entry that was without a doubt far above anything else that has ever been converter. That massive Ork ship was really incredible, and hopefully you can get some sense of the size of it from this picture, because it was really enormous. 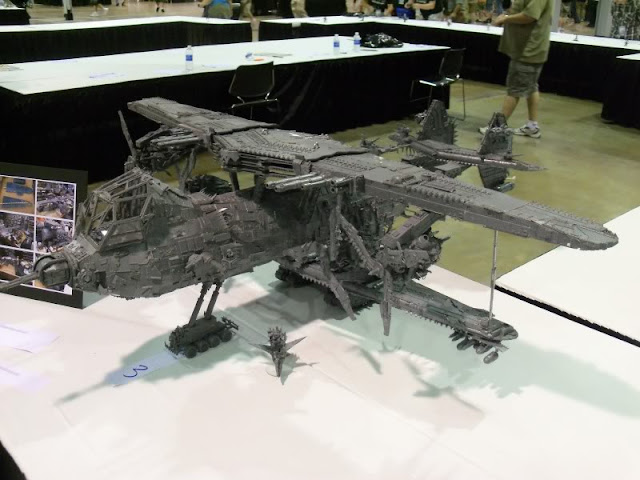 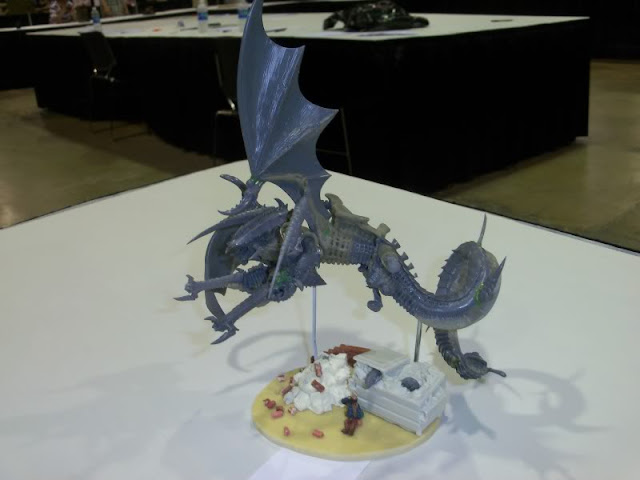 This was an Armies on Parade entry that I really liked. A daemon army with a beach theme, with everything converted to go with the theme. It went together really well with the terrain and backdrop, and I liked how everything in it was unique. 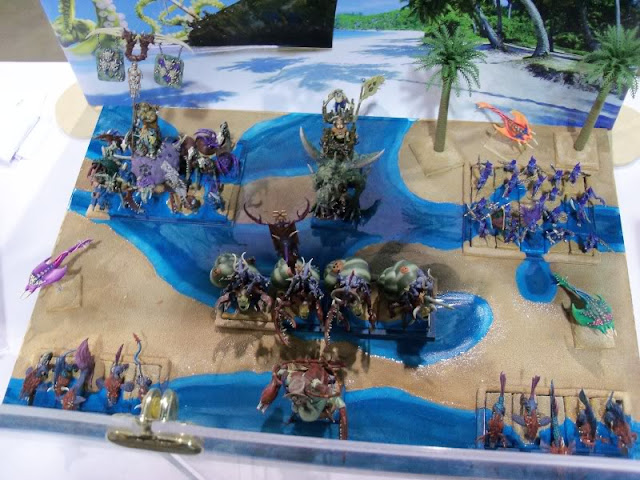 Here are a few of the club boards and display boards they had at Games Day. As usual, there was some pretty impressive stuff. 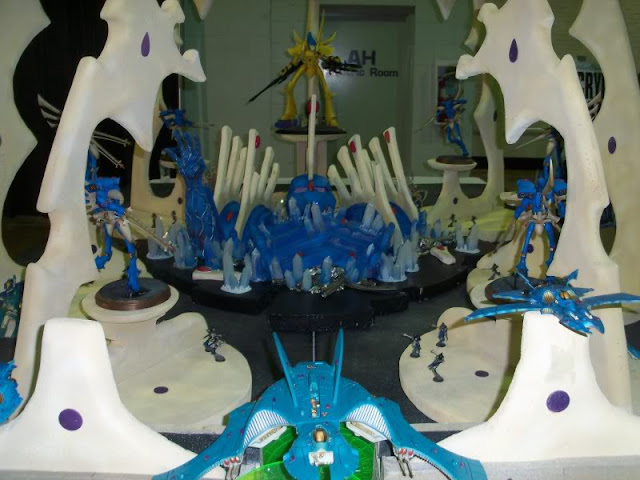 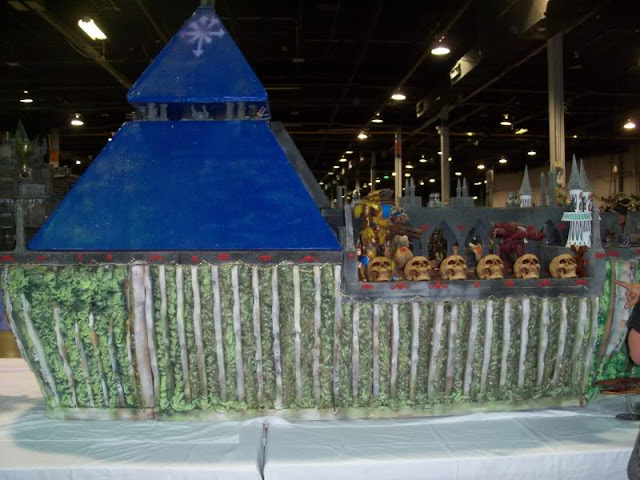 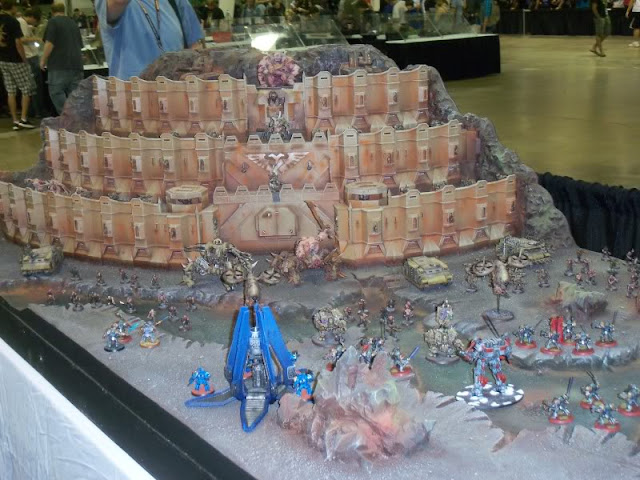 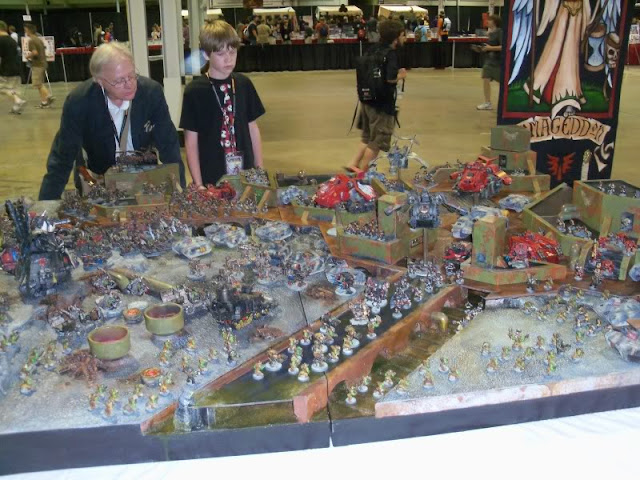 There was a Specialist Games area, where you could see or learn how to play some of the specialist games, like Epic, Blood Bowl, and Space Hulk. This is a picture of the Battlefleet Gothic table in this area, which I thought looked pretty good. I was tempted to try out Epic, which I think looks really cool, but I don't need another game to play. 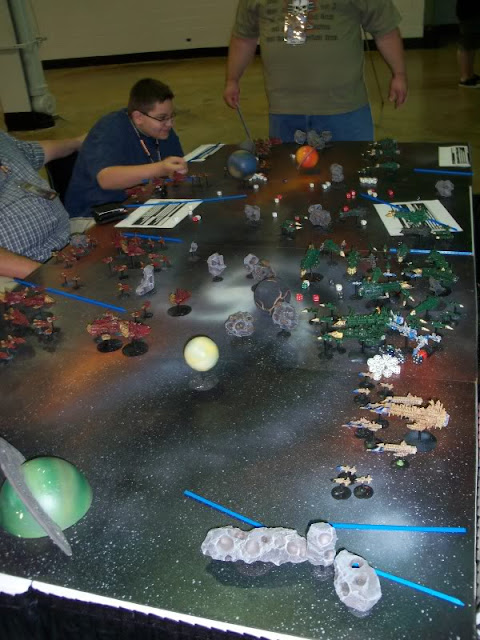 They had a big Empire Cannon that people were lining up for. I'm not sure exactly what they were doing with it, since I didn't want to wait in line, but it looked cool. 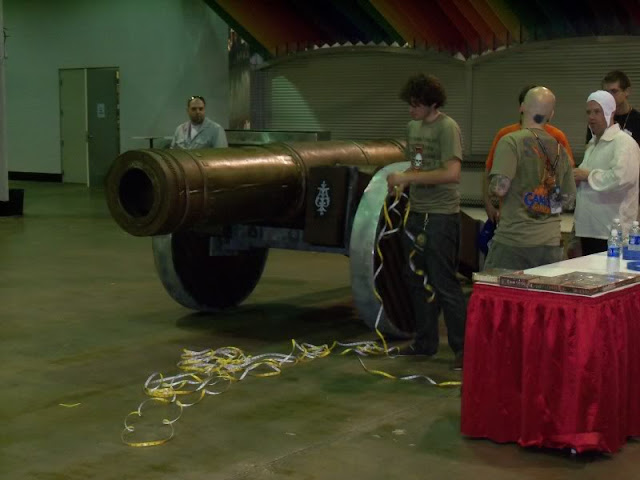 And finally, here are some pictures of a Khorne Chaos Spawn I made in the Fantasy conversion contest. Considering the time limitation, and that all I had to work with was a few random sprues, a pair of clippers, and the absolute worst plastic glue ever invented, I think he turned out pretty well. 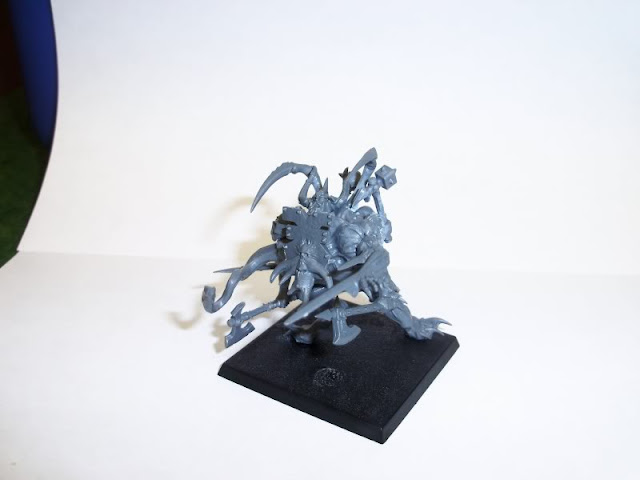 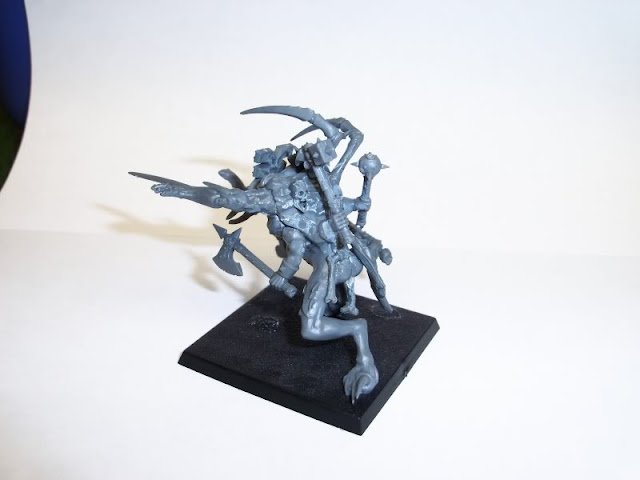 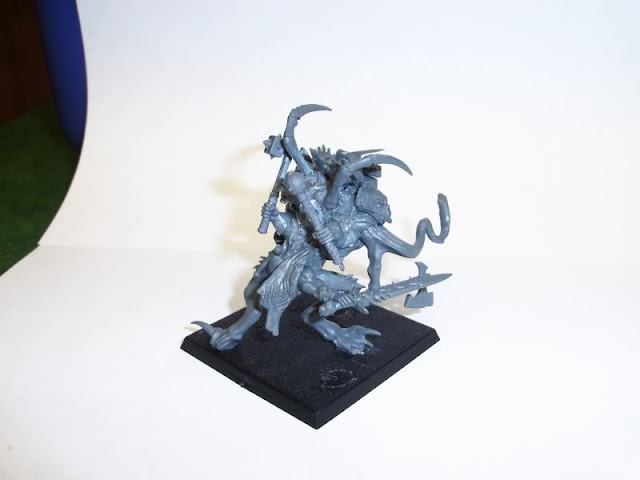 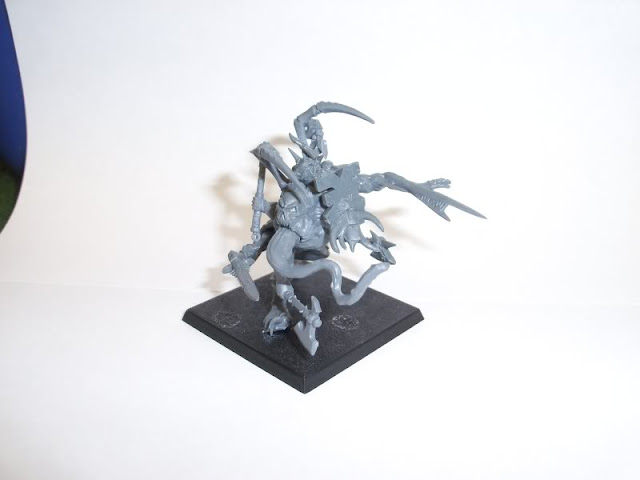