This was my first game of 6th Edition Warhammer 40,000. We played a small 500 point game to try learning the new rules. I played my renegade Imperial Guard, and my opponent played Tau. Since it was such a small game, we played on a 4' by 4' board, and set up some ruined buildings for terrain. The mission gave victory points for destroying units. Deployment zones were 12" away from a diagonal center line. The Tau set up first and had the first turn.

The Story
The story behind my renegade guard is still evolving somewhat. Basically, they are the personal army of a nobleman on a very feudal world with a large number of nobles who are constantly struggling against each other for power. This particular nobleman has run afoul of the Imperial authorities because of his peculiar and heretical interest in alien cultures. He has been interacting and trading with Tau, Eldar, and other races of foul xenos, and he even uses some of them as mercenaries in his army.

Tau authorities have discovered that a few of their race have defected and joined this human's army, and they aren't too pleased about it. They have sent a small force to infiltrate the planet and capture or kill their wayward brethren. They discovered a squad of Tau mercenaries in an infantry platoon that was isolated patrolling some city ruins (for some irrelevant reason). Seeing their chance, they set an ambush for the patrolling Imperial Guardsmen.
The Setup
The Tau ambushing force consisted of a unit of Pathfinders to the left behind the walls of the ruined cathedral, a unit of Firewarriors behind some rocks and accompanied by an Ethereal (no doubt hoping to get close enough to use his pheromones on the defectors), and backed up by a Hammerhead tank way in the back. I'm not sure how they sneaked into the city with that thing. In addition, a unit of Kroot had managed to sneak ahead and hide themselves in the ruined shrine.

The Imperial Guard army was spread wide as it advanced, unsuspecting, through the city. In a small building on their left was the squad Tau defectors. To their right was a full unit of 50 conscripts, marching directly down the middle of the wide street. Further to their right and behind the ruined cathedral walls were the Company command squad, then two units of guardsmen backed up by their Platoon command squad. 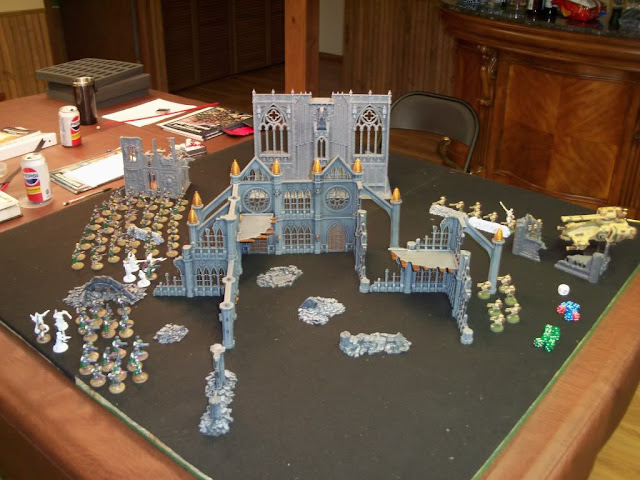 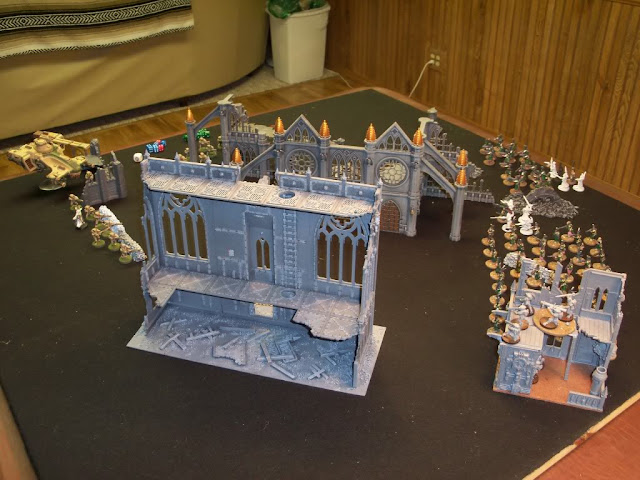 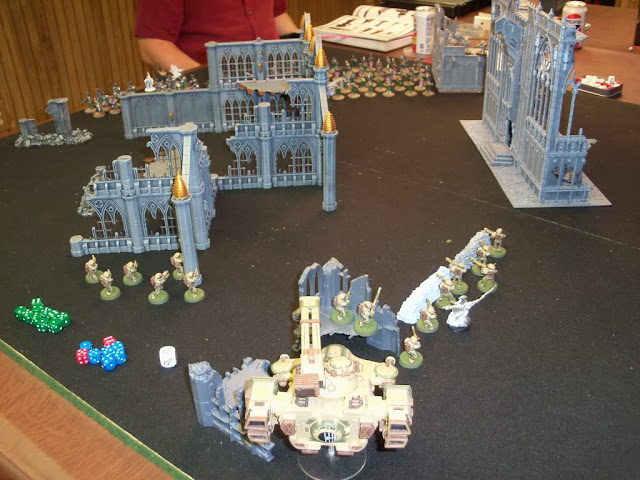 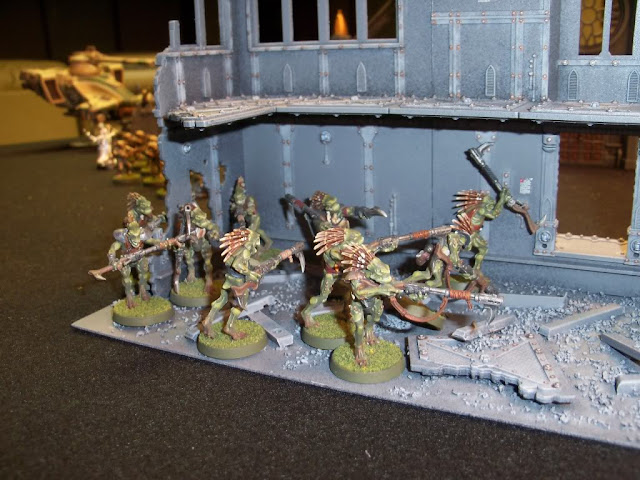 Turn 1
The Hammerhead tank and the Pathfinders advanced a little. The sneaky Kroot in the shrine also moved up, but remained out of sight. Some long range fire from the Firewarriors killed a couple of conscripts, opening the hostilities. 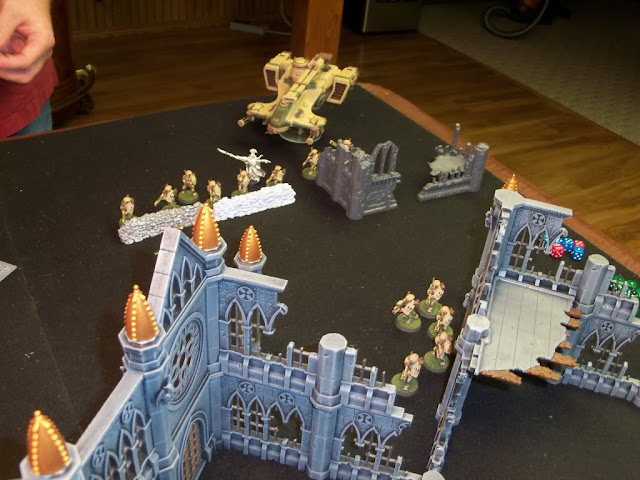 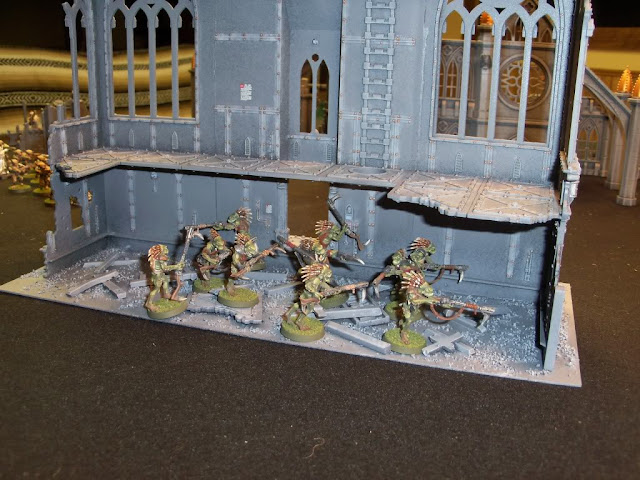 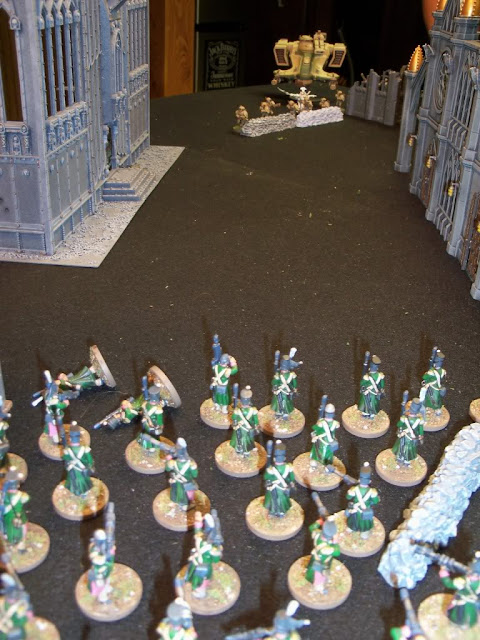 In response, most of the Imperial Guard surged forward. The Company Commander stayed near the conscripts, while the Platoon commander went to the right with the two squads of guardsmen to work their way around the ruined walls of the cathedral. The Tau defectors stayed in their building, perhaps guessing the purpose of the sudden attack. Some of the conscripts were in range of the Firewarriors down the street, and they managed to take down one or two of them with their undisciplined fire. 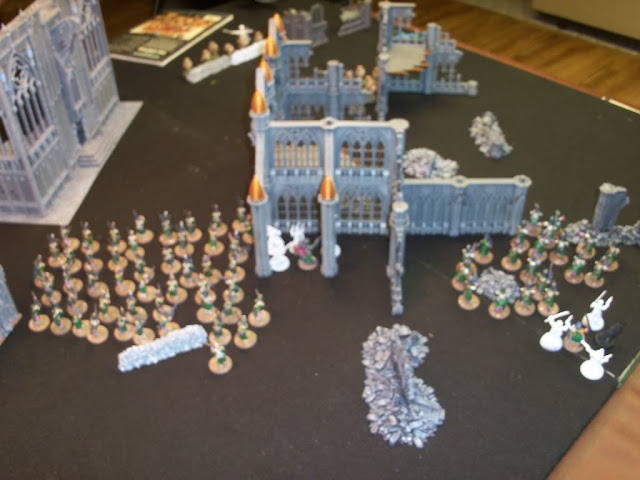 Turn 2
In response, the Hammerhead tank fired it's sub-munitions at the huge mass of conscripts, killing 14 of them outright in the large blast. The rest fled the battlefield in great haste. The Kroot revealed themselves and attempted to charge the Tau defectors in the building, but the Tau were not caught by surprise. The incredibly accurate defensive fire from the Tau prevented the Kroot from reaching them, and they were caught exposed in the alleyway. 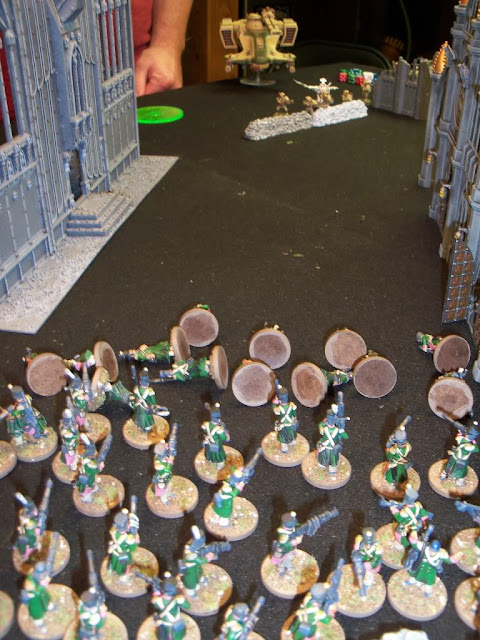 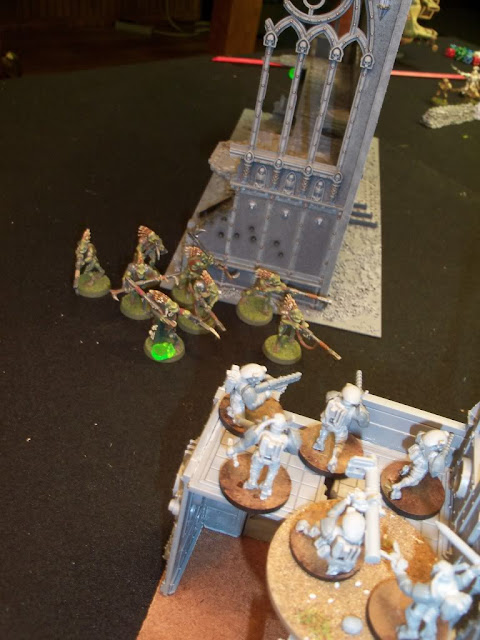 Another volley of fire from the Tau defectors all but eliminated the Kroot. The single survivor wisely fell back. Meanwhile, the rest of the Imperial Guard continued their general advance around and through the ruined cathedral, slowed by the restricted lanes of movement. 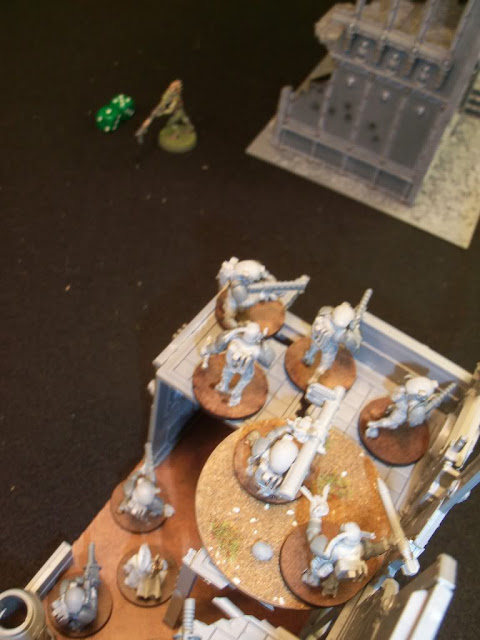 Turn 3
The Tau Pathfinders, Firewarriors, and Hammerhead all lined up perfectly to fire through a gaping hole in the ruined cathedral at the Guardsmen trying to pick their way through the rubble. With the rubble providing a great deal of cover and reducing visibility, casualties were relatively light. 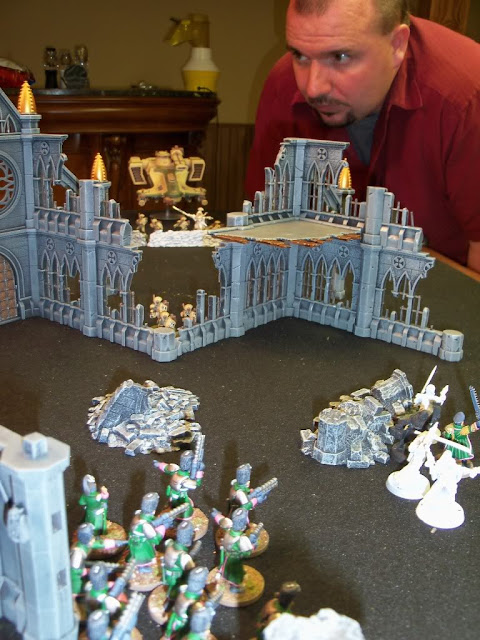 The nearest Guard squad, lead bravely by Ensign Jimmy, assaulted the Pathfinders, but incredibly failed to harm any of them. The defenders killed one of the Guardsmen, and the rest immediately fled, and in their panic they foolishly ran through the cathedral doors into the open street, with Jimmy in the lead. 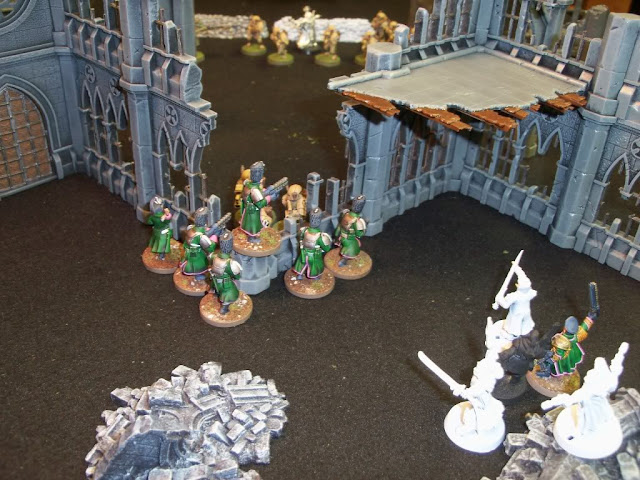 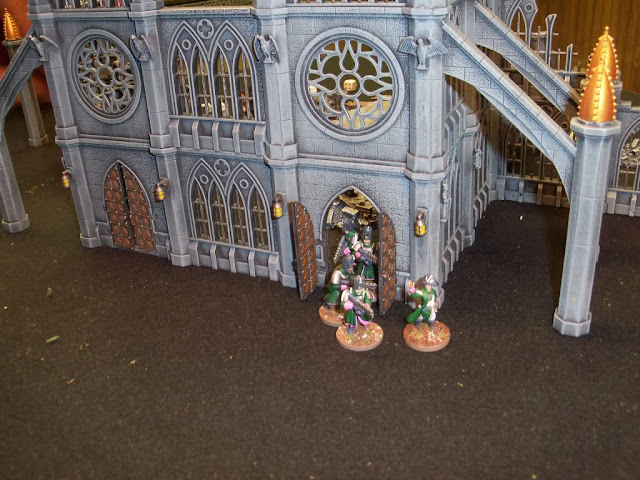 Turn 4
Not wanting to press their luck, the Pathfinders fell back a little to avoid further assaults. The Firewarriors and Ethereal moved closed to the cathedral, and the lone Kroot rallied as he neared his allies. Now the entire Tau force was together, and they poured fire into the Guardsmen in the Cathedral. The Lieutenant and all three of his staff were gunned down, and the one remaining fled. The Captain and one of his staff were killed by a falling pillar when a round from the Hammerhead tank impacted on the other side of a wall. (We weren't really sure how to handle a blast weapon places so that it hits members of a unit it doesn't have line of sight to, but decided they could be hit but would get a cover save). Ensign Jimmy also fell to enemy fire. The leadership of the Guard army was reduced to a couple of young Ensigns. 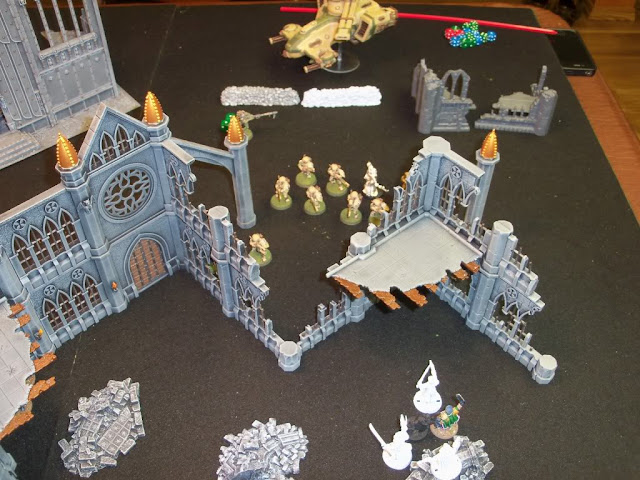 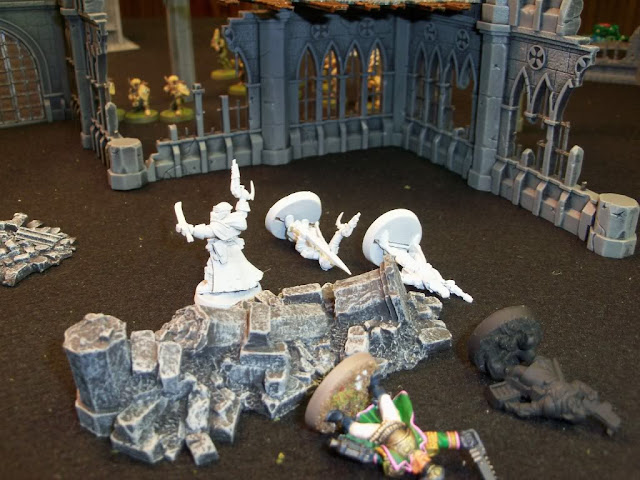 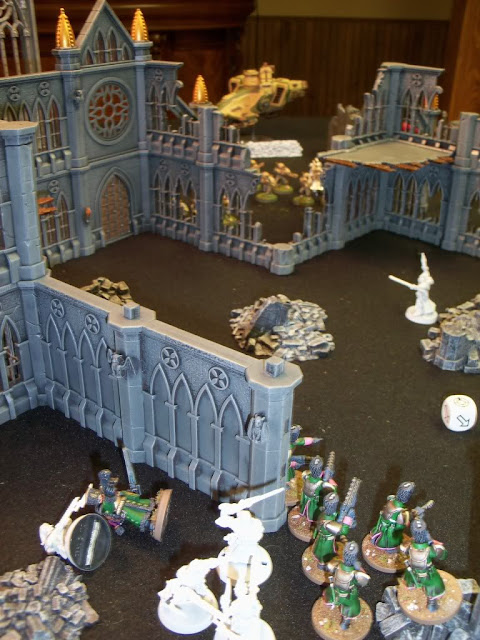 Inspired by the heroic sacrifice of their young officer, Ensign Jimmy's unit rallied. The lone remaining member of the Lieutenant's staff also got back in the fight. Except for the squad of renegade Tau, who were mostly forgotten about in the midst of the life and death struggle in the ruins, the entire Guard army was now in the rubble of the Cathedral, opposite the entire Tau force. 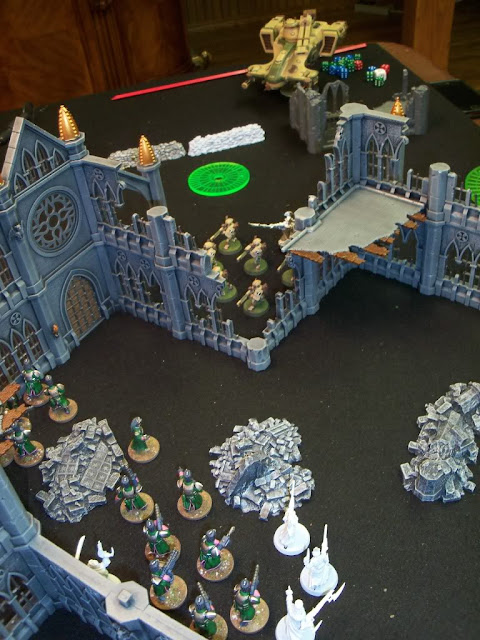 Turn 5
Ensign Timmy, the highest ranking officer remaining in the area, led his men forward. A fierce firefight ensued between the Guardsmen and the Tau, with men and tau ducking for cover and firing through windows and over broken columns. Inspired by the heroic sacrifices of their officers (or perhaps just inspired by the joy of being rid of them), the guardsmen fought like lions. They not only got the better of the Tau in the close range firefight, but completely wiped out the ambushing force, aside from the Hammerhead. 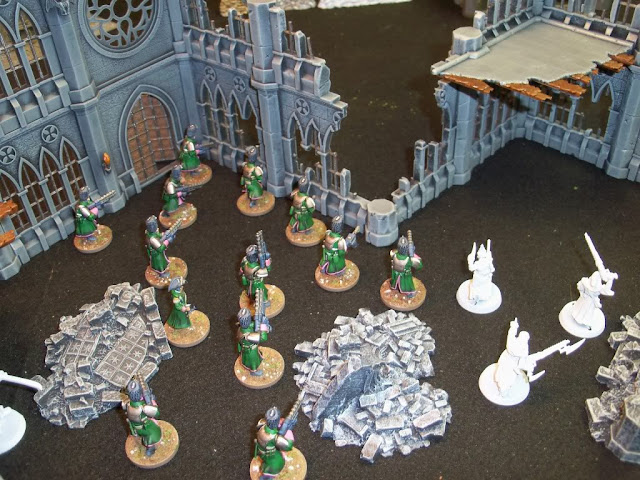 They didn't have much chance of taking out the tank, but with no hope remaining of the Tau recovering their defectors, the battle was over. The Guardsmen had won, though the Tau would certainly be back for another try.