This was only my second game of 6th edition Warhammer 40,000, so we undoubtedly did some things wrong. It was a 1500 point game, me playing Chaos Marines and my opponent playing Space Marines. The goal of the mission was to capture and hold the four objectives, and the deployment was standard long table edges. There wasn't much of a story behind this game. Just Space Marines and Chaos Marines fighting over some random stuff. The objectives were a wounded Space Marine over on the ruined Temple of Skulls, some ammo crates just sitting amongst some rocks, a guy fleeing from a crashed plane, and a piece of the crashed plane.

The Setup
The pictures below show the initial deployments, with Chaos Marines in the foreground, and Space Marines opposite. The Space Marines deployed first and would have the first turn. On the far right of their line, they has some veterans in some rocks, their only unit that side of the river. Just across the river were some scouts, backed up by a tactical squad on the hill behind them. To their left a unit of 6 Terminators (including a cyclone missile launcher), and finally a half unit of marines deployed on the ammo crate objective in the rocks, with 5 assault marines behind them. A unit of scouts also managed to sneak forward to the Temple of Skulls to secure what was left of the wounded Marine there.

Seeing the dispositions of their enemy in advance (probably thanks to some sorcery of their Thousand Sons ally), the Chaos Marines deployed entirely on their own left, where their enemy appeared to be weakest. The Terminators over on the right were a powerful deterrent. 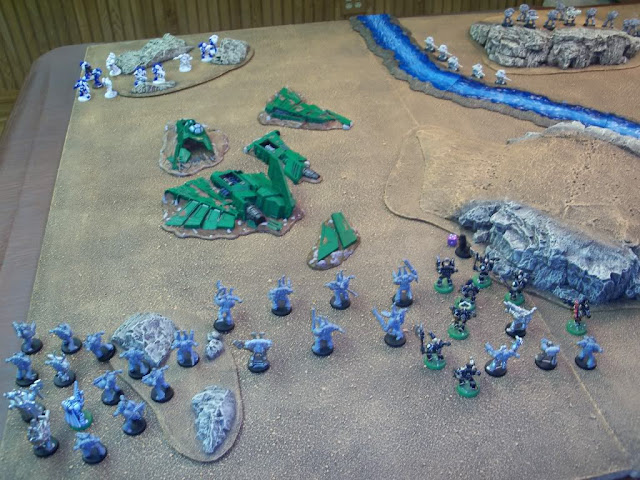 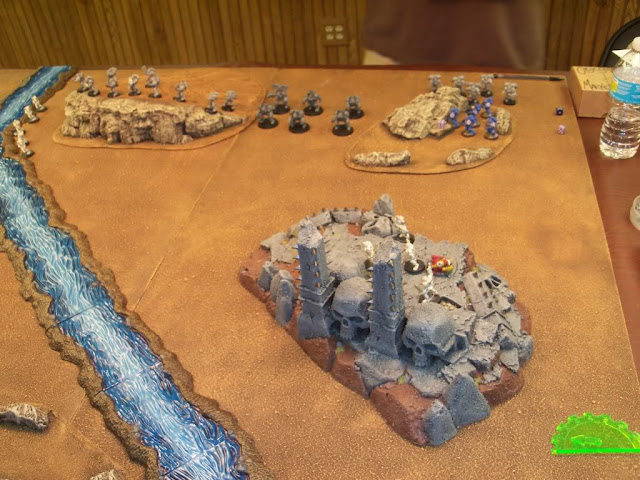 Turn 1
The Ultramarines already held two of the four objectives, so they mainly held their ground, but the Terminators and Assault Marines on their left and the Veterans on their right did advance. On the Chaos Marine side, the unit behind the rocks stayed in position so the rock would block them from the view of the Plasma Cannon across the battlefield from them. They held one objective, the fleeing pilot. The rest of the Chaos Marine left (and only) flank advanced, and they fired some shots at the Veterans, lucky shooting taking down a few of them. 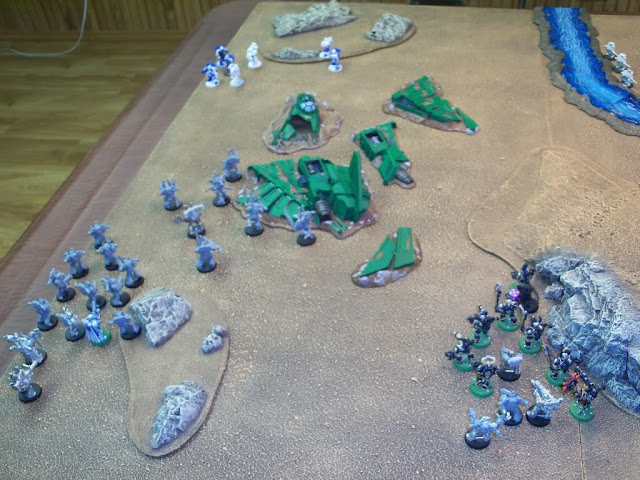 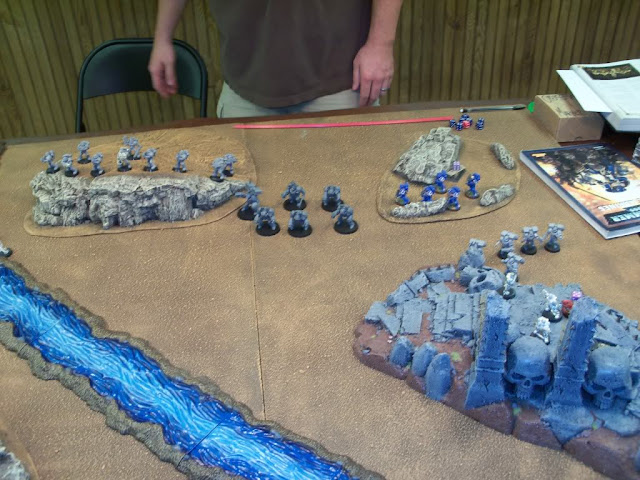 Turn 2
Thinking their left flank was solidly in their control, the Ultramarines focused on their right. The Terminators and Assault Marines moved in that direction. Another unit of Assault Marines arrived by Deep Strike between the river and the large rock that hid a unit of Chaos Marines. Shooting from the Ultramarine Veterans took out half of the Berzerkers advancing toward them. 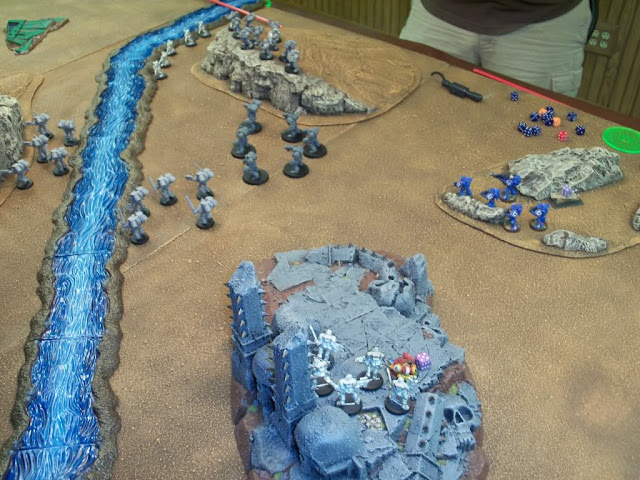 The battle changed abruptly as all of the Chaos Marine reinforcements arrived together in a perfectly coordinated counterstrike. A unit of Thousand Sons in a Rhino arrived on the far right of the Chaos Marine line, disembarked and fired at the Scouts guarding the wounded marine objective, killing two. On the same side of the battlefield, four Chaos Terminators teleported onto the field of battle near the ammo crate objective and fired at the Ultramarine squad guarding it. 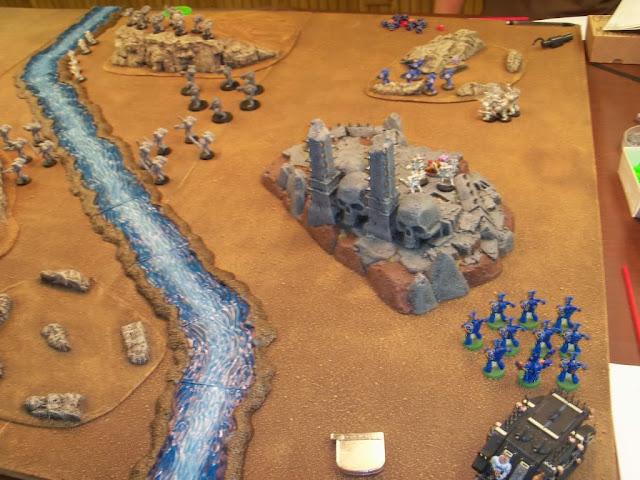 On the other side of the battlefield, a Predator arrived to pour fire on the Scout Snipers across the river, and two Obliterators teleported next to the ship wreckage with perfect accuracy, thanks to a nearby icon. Their plasma cannon fire killed six of the marines in the Tactical squad on the rocky outcropping, and forced the rest to go to ground. Diving for cover did save the plasma cannon gunner in the unit. Shooting from the Chaos Marines on the far left and from the Berzerkers killed three more of the Veterans, leaving only two left in each of the two combat squads. 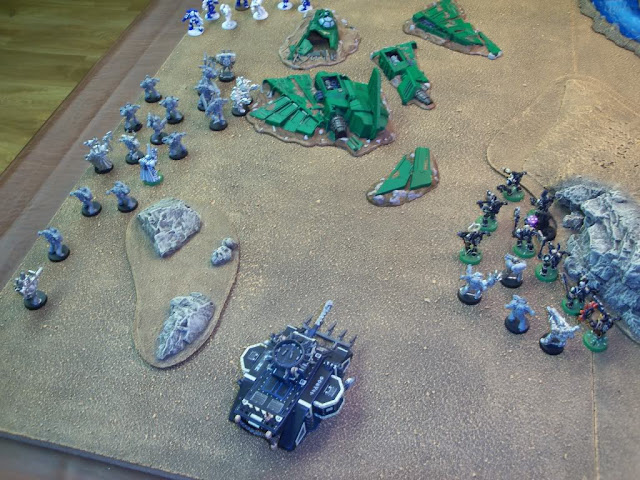 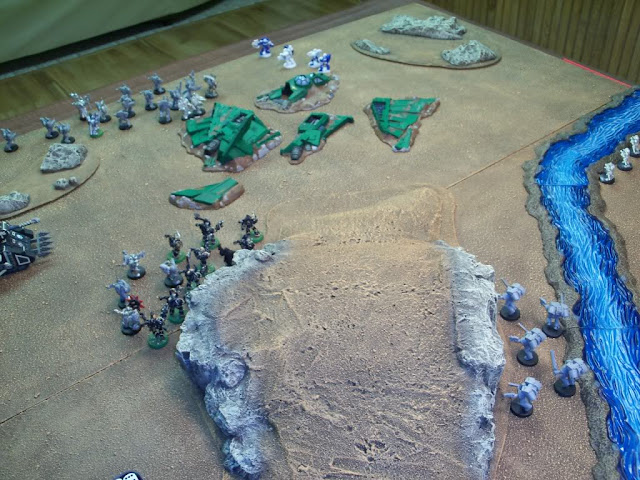 As the battle began to swing completely in their favor, the Chaos forces suffered a surprising reverse. The Berzerkers charged forward toward the closest veteran squad, but the veterans didn't falter in the face of the furious assault. The sergeant calmly took aim with his bolter, loaded with armor piercing ammo, and put down two of the Berzerkers as they charged. The heavy flamer accounted for another, and the sudden reversal caused the one remaining Berzerker, held up by the falling bodies of his comrades, to fail to reach his target. 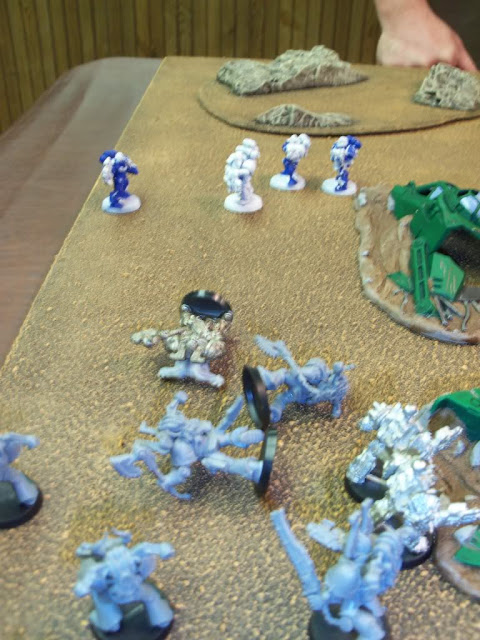 Turn 3
Having stunned the Berzerkers, the two Veterans followed up their success by assaulting the Obliterators, but even with the Sergeant's Power Fist, they failed to cause any wounds before being smashed to pieces by the Obliterators. The other two Veterans wisely fell back to take advantage of the cover of the wreckage, and the scout snipers moved into the river. The Assault marines all moved up onto the large rock, preparing for an assault on the Chaos Marines holding the objective behind it. 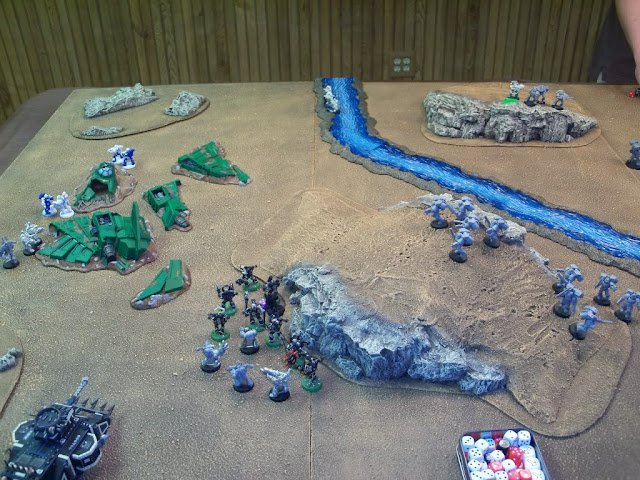 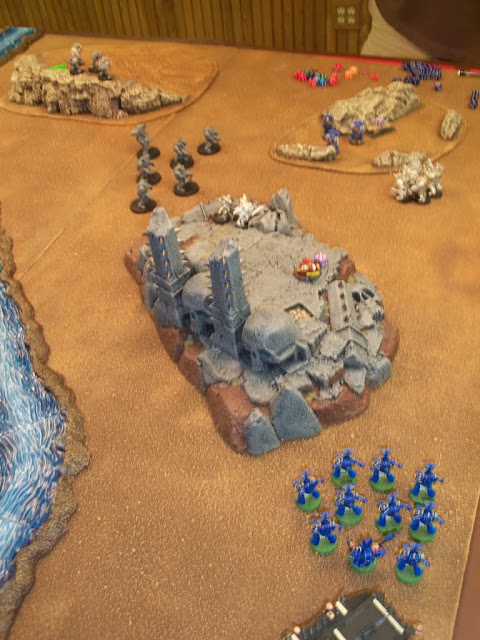 Some long range shooting from the Thousand Sons only managed one casualty on the Tactical Marines taking cover behind the rocks near the ammo crates. The Chaos Marine Terminators, recognizing the real threat, advanced toward the Ultramarine Terminator squad, though they were outnumbered by the loyalists 2 to 1. Their bolter fire succeeded in taking down one of the enemy Terminators, and some impressive long range shots from the Obliterators on the other side of the battle field took down two more, evening the odds. They didn't hesitate to charge the Ultramarine Terminators, even as they tried to flee, managing to kill one of them in the ensuing close combat. 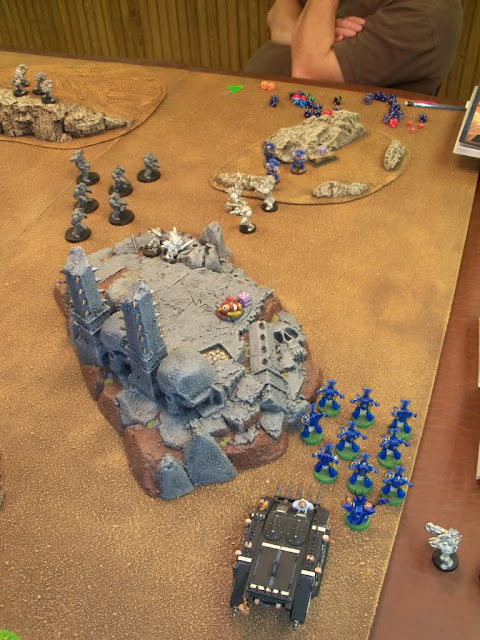 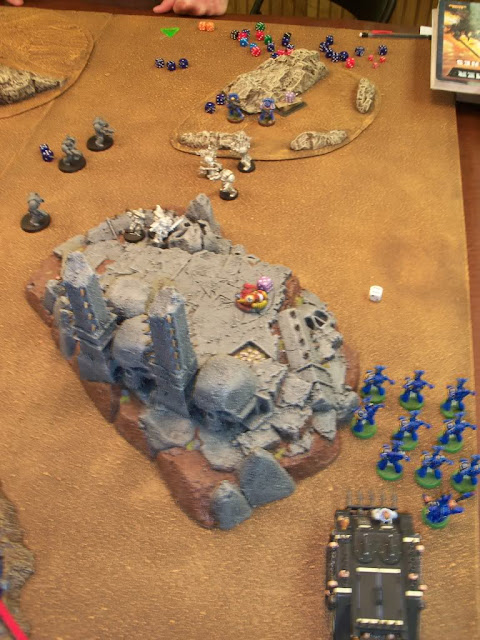 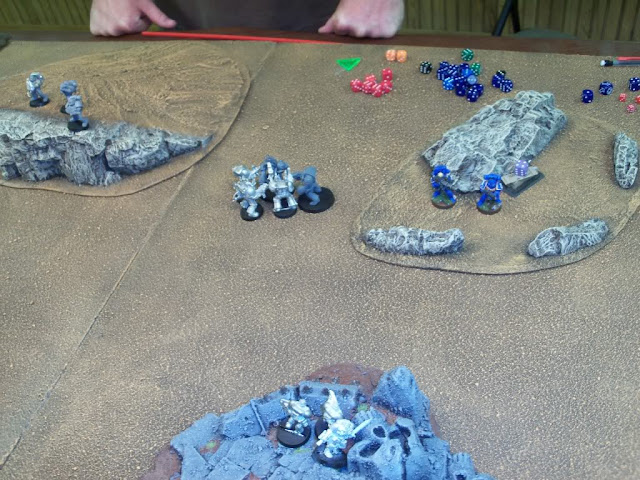 Elsewhere, on the Chaos left, the Chaos Marines behind the hill with the fleeing shuttle pilot moved up onto the hill in an attempt to get the jump on the Assault Marines. The climb up the hill took away too much of their momentum, however, and they did not reach their opponents in time. 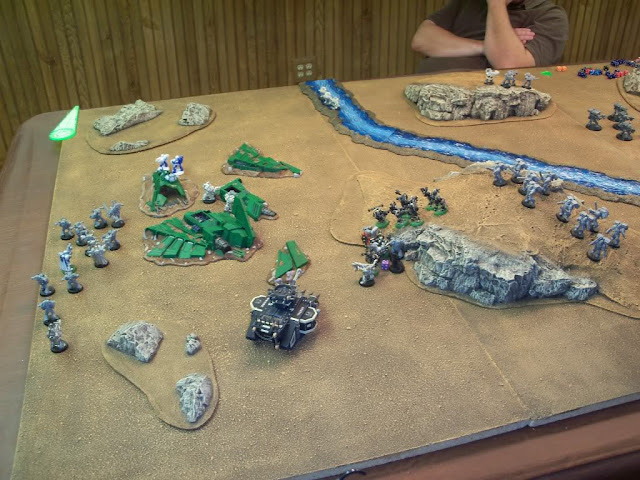 Turn 4
Having enough time to spot the attempted attack, the Assault Marines predictably took the initiative and charged first into the Chaos Space Marines. The sudden and brutal attack on them as they attempted to climb up the deceptively steep hill took the Chaos Marines by surprise. Seeing their unfavorable position, they attempted to fall back, but the Assault Marines did not hesitate to follow up their success and scattered the Chaos Marines to the winds. At the same time, some much needed Ultramarine reinforcements arrived, as a Rhino containing a combat squad led by the Ultramarine Warlord zoomed directly toward the other squad of Chaos Marines. 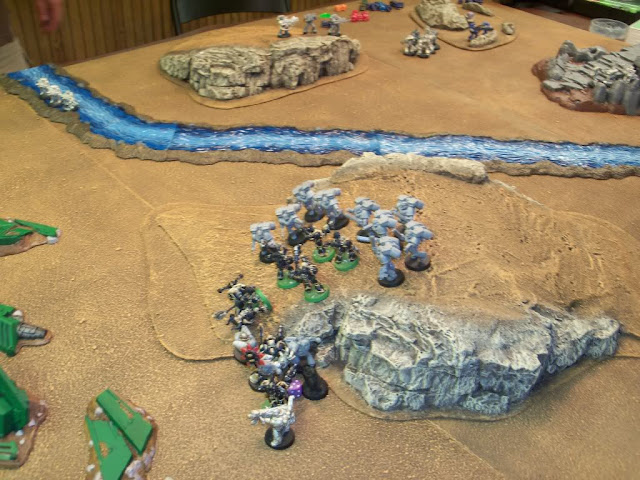 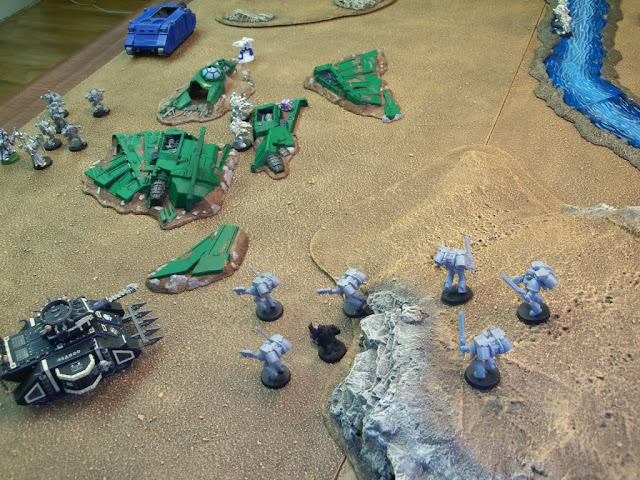 Meanwhile, on the other side of the battlefield, the Terminator close combat claimed one casualty from each side, and the fight continued. 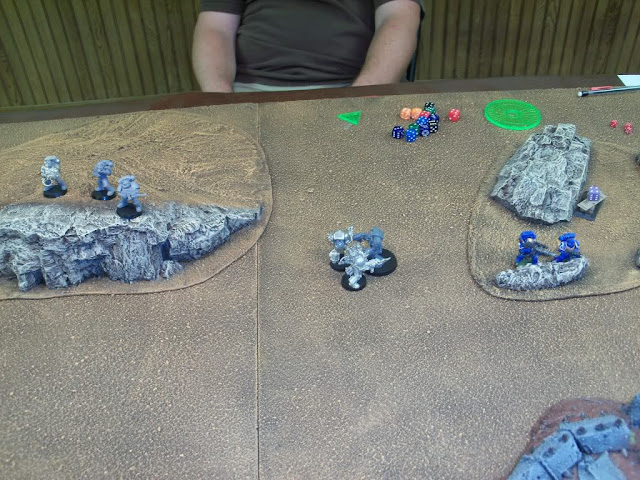 With an Ultramarine Rhino bearing down on him at full speed, the Chaos Marine Lord calmly leveled his plasma pistol and fired directly through the vehicle to it's vulnerable fuel tanks, causing the Rhino to explode dramatically. The former occupants stumbled out of the back of the wreckage, but composed themselves enough to a receive an assault from the Chaos Marines accompanying the Lord. The two Warlords immediately engaged in a challenge, which unfolded very slowly. Behind them, the Obliterators and Predator opened fire on the remaining Assault Marines, killing all but one. 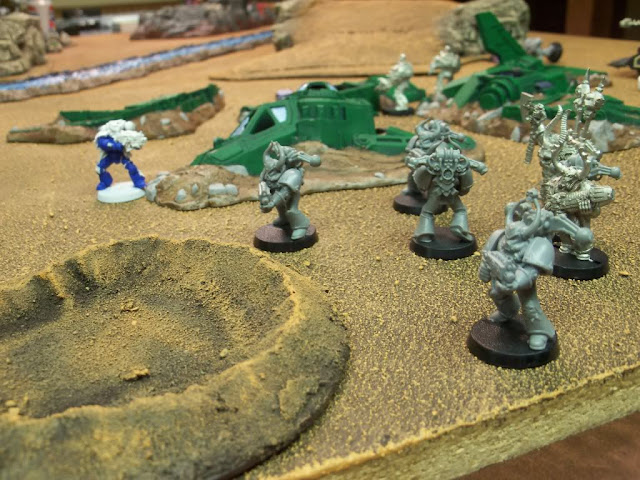 On the other side of the battle, the Chaos Terminators finished off their loyalist counterparts and moved to context the ammo crate objective, now held by a single Ultramarine. The Thousand Sons moved onto the Temple of Skulls, and had no trouble wiping out the Ultramarine Scouts to capture the wounded marine objective. 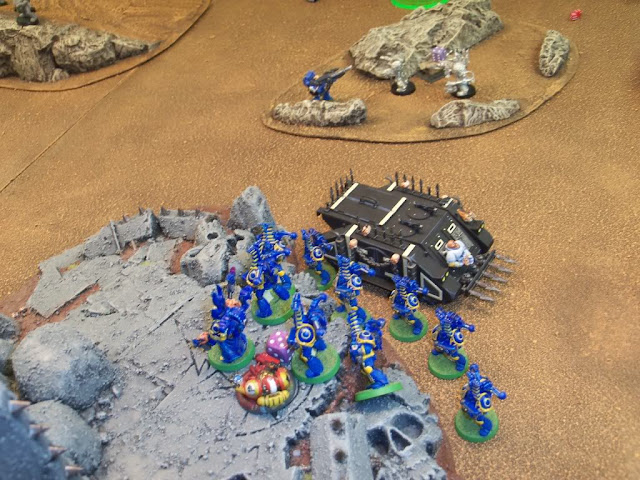 Turn 5
The one remaining Ultramarine veteran and the three scouts, in pure desperation, surged forward toward the objective in the shuttle wreckage, hoping to miraculously wrest it from the Obliterators. Meanwhile, the Chaos Marines had finished off the Space Marines in combat, and stood around watching their Warlord trade blows with his Ultramarine counterpart. It was a remarkably plodding fight, but the Chaos Lord was outclasses against the Ultramarine with his better armor, better invulnerable save, and better weapons. The outcome was inevitable, and eventually the Chaos Lord was defeated. 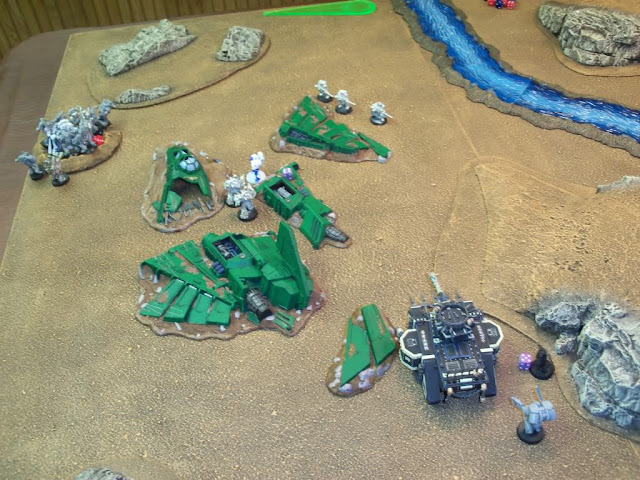 Turn 6
Having finished off the Chaos Lord, the Ultramarine commander then brutalized the totally outclassed Aspiring Champion.The one remaining Assault Marine shot at and assaulted the Predator, to absolutely no effect, while the Predator completely ignored him. The remaining Ultramarine Scouts and Veterans were handled easily by the Obliterators. 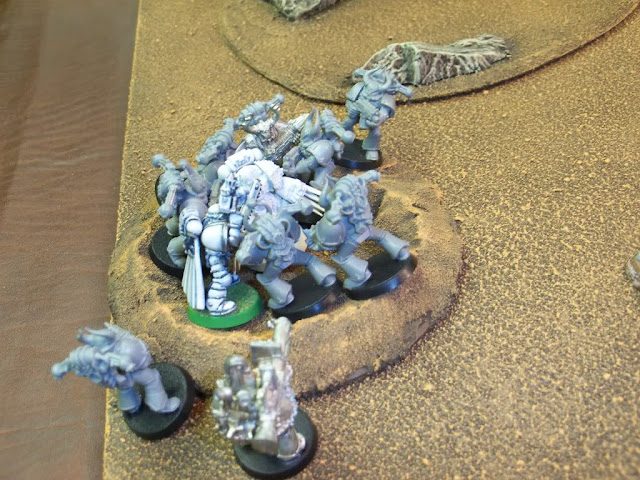 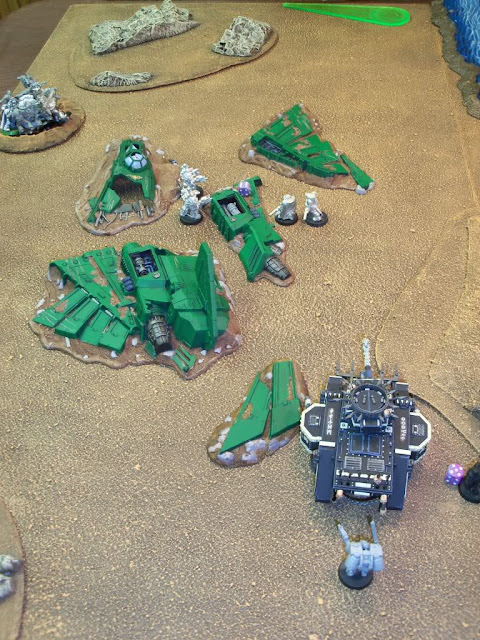 Turn 7
The combat with the Ultramarine Commander increased exponentially in speed and ferocity once he finished with the challenges and set about slaughtering the relatively helpless Chaos Marines. He quickly finished them all off, but by that point there was no army left for him to command. The Thousand Sons unit was unopposed in capturing the wounded Space Marine objective, who they would no doubt be using as part of some arcane ritual on the Temple of Skulls. The two remaining Chaos Terminators guarded the ammo crates, but since they are such elite warriors, they felt far too important to partake in such mundane tasks as capturing objectives or picking up ammo crates. Still, the Chaos Marines had won a solid victory. 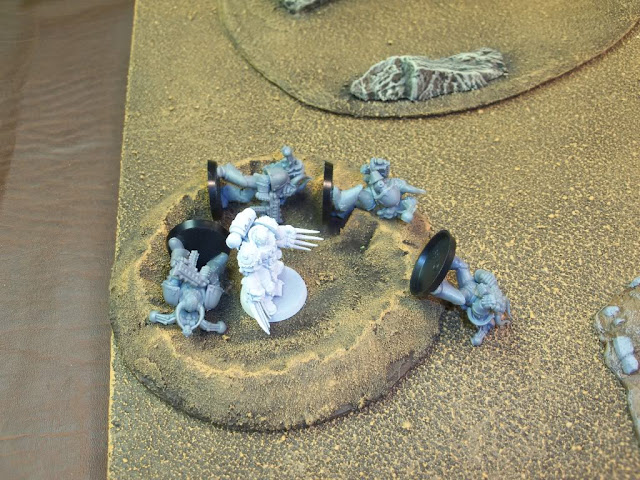 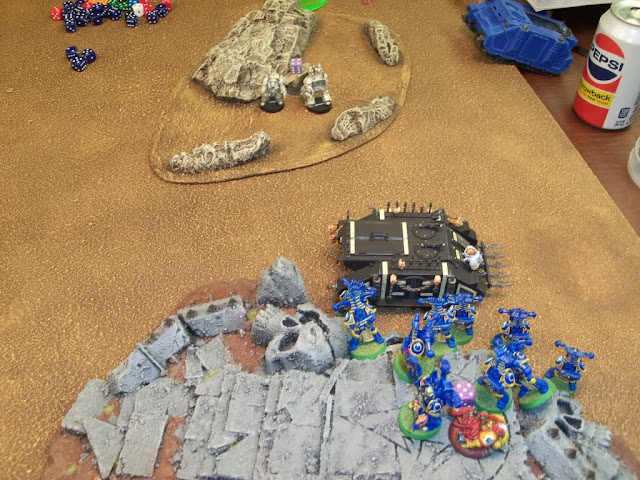