A powerful Goblin Shaman is foretelling of a great Waaagh to come soon, when the Goblins and Orcs will sweep out of the Dark Lands and overthrow the Empire. Although not very powerful at the moment, his cult is growing stronger and unrest is beginning to stir.

So as not to raise suspicions and warn him of his intentions, the Emperor has decreed that the best way to solve the crisis is to assassinate the Shaman. The Warriors have been chosen to venture into the Shaman’s lair below Mount Gunbad, on the far side of the Worlds Edge Mountains, and kill him. 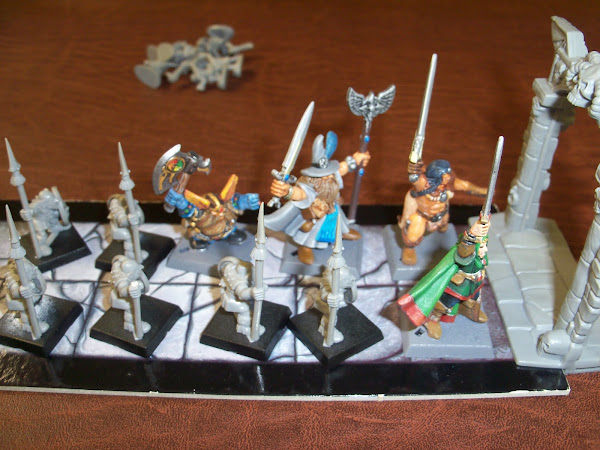 Upon entering the dungeon, the new band of Warriors is immediately by Goblins with spears. This was the first taste of combat for most of the adventurers, and they showed their inexperience. The Barbarian slashed around wildly, only wounding his comrades, and the others failed to harm a single Goblin. In return, the Goblins wounded all the warriors except the Barbarian, who must have appeared to be on their side. 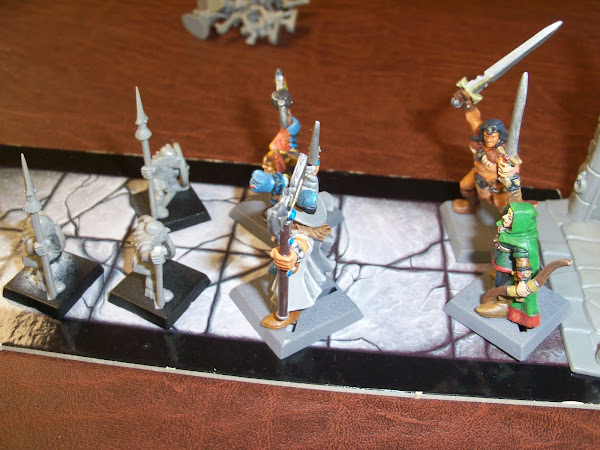 After their initial bumbling, the warriors get it together and all contribute to taking out the Goblins.

The Elf even gets one of the Goblins with his bow. On one of the corpses, the Barbarian find the Stone of Transmutation. Whatever that is. The adventurers continue on, and explore for a while without encountering any more enemies, during which time the Wizard is able to completely heal all of them. 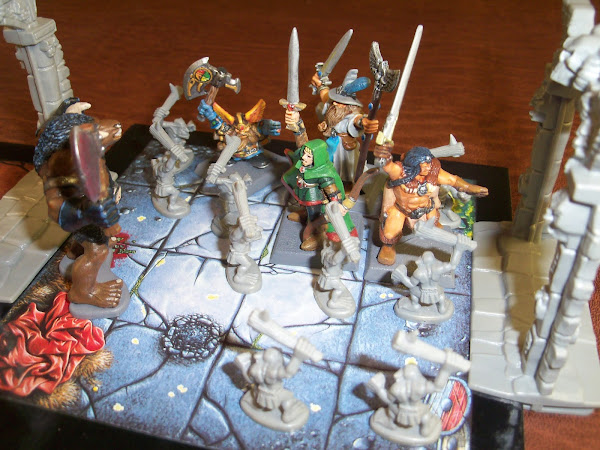 Upon entering the aptly-named Monster's Lair, our heroes are attacked by 12 scorpions, 9 Snotlings, and a Minotaur! The scorpions go after the Dwarf, who kills 8 of them and is wounded by the rest. 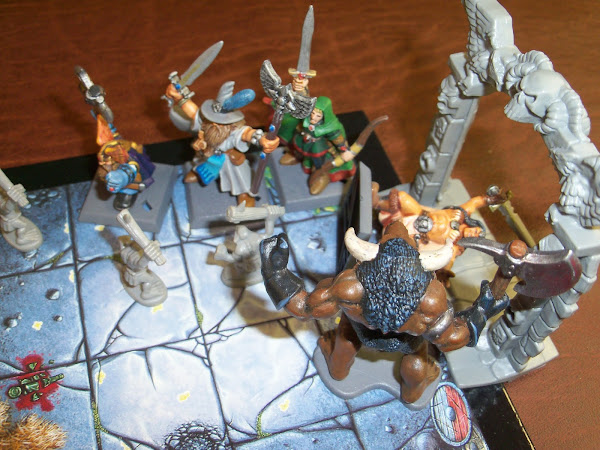 The threat making his gorge rise, the Barbarian went berserk! He and the Dwarf each killed several Snotlings, trying to fight their way to the Minotaur. The Elf, on the other hand, fled to the safety of the corner behind his comrades, but missed the Minotaur with his bow. The Minotaur knocked the Barbarian down to the ground, but the Wizard was able to heal him enough to get him back on his feet. 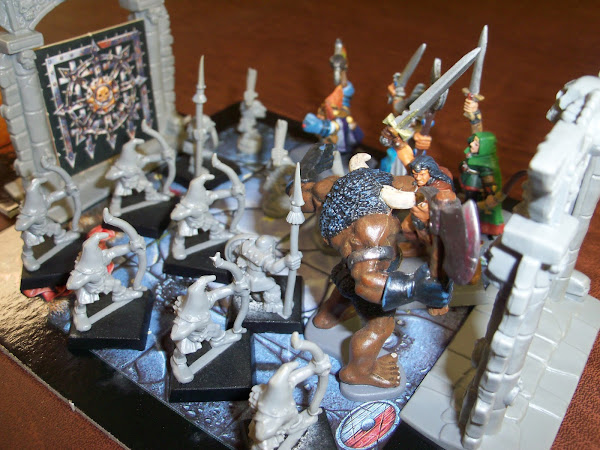 Things were already looking grim, when suddenly a portcullis came down to close off the entrance to the room, and seven Goblins poured into the room! They don't call it the Monster's Lair for nothing. 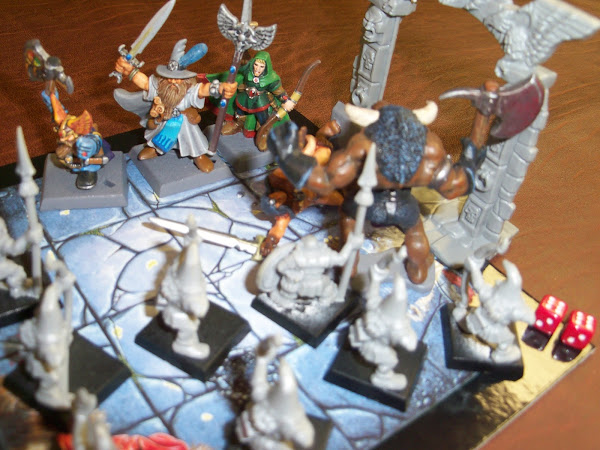 The Barbarian wounded the Minotaur before going down to a Goblin arrow (or perhaps just the threat of retaliation from the Minotaur). The other warriors finished off the snotlings, and luckily the Goblins mostly missed or failed to cause any harm with their half-hearted attacks. The Elf grudgingly gave his magical healing potion to the Barbarian, healing him completely. The were going to need him at full strength to have any hope of getting out of this mess. 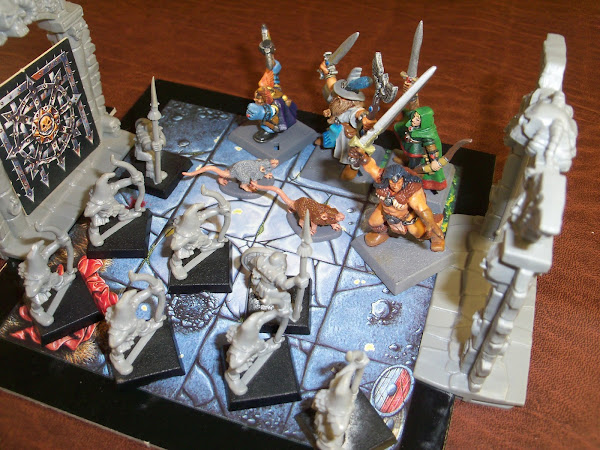 When it rains it pours, and suddenly the dungeon poured 9 giant rats on the warriors! Luckily for them, only three of the rats were on their side of the portcullis. Fully rejuvenated, the Barbarian badly wounds the Minotaur with his sword, before finishing it off with the Stone of Transmutation, turning it into an imposing Minotaur statue. The Dwarf only managed to kill a single Giant Rat, and the other two don't even manage that. Luckily the monsters don't fare much better. At one point it looks like the Elf will be hit by two Goblins, but he deftly dodges both attacks. 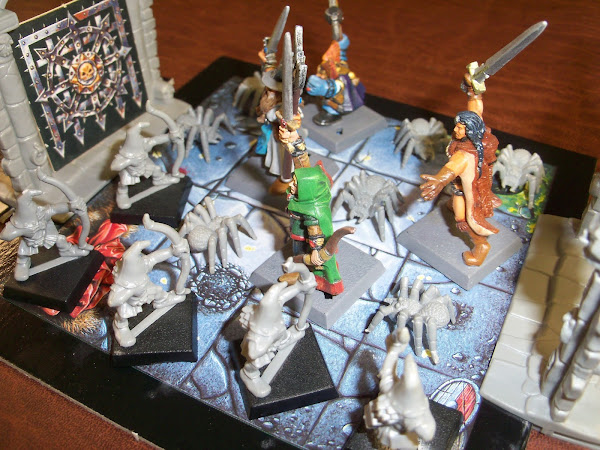 The heroes are down to just 5 Goblins to defeat, when suddenly they are set upon by 7 Giant Spiders (with another 4 awaiting them on the other side of the portcullis, should they ever manage to open it). They make short work of the spiders, with the Barbarian alone slaughtering four of them. 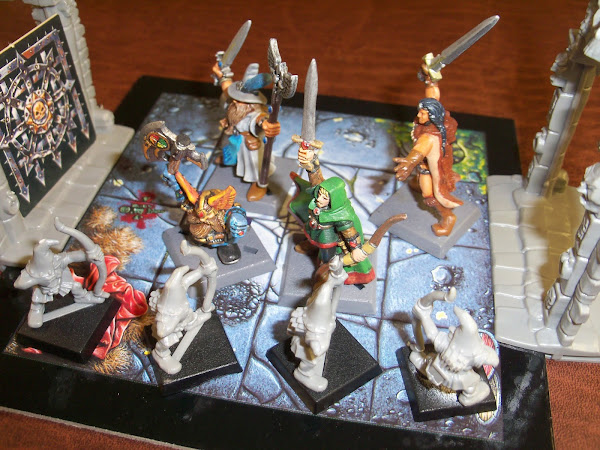 The Elf was badly wounded by a Goblin, then unexpectedly the room was flooded with poison gas, wounding all the warriors, followed by four giant bats! The Wizard, near death, had to use his remaining power store to heal himself, which allowed him to just barely survive the attacks from the giant bats. The warriors finally manage to finish off the remaining monsters, receiving a few more wounds in the process. But finally they had emptied the Monster's Lair of monsters. 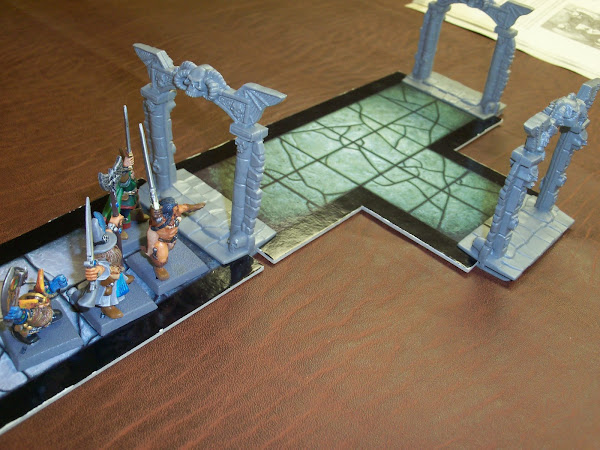 They found plenty of treasure among the monster corpses. The Barbarian took a Sword of Slicing, the Elf a Light of Courage, the Wizard a Potion of Strength, and the Dwarf the Horn of Shielding. Badly wounded as they were, the warriors would have turned back, had their way not been blocked by a portcullis, followed by an entire hallway full of monsters. Since it was, they pressed on.

Coming to a junction, they first explored to the right, finding a Guard Room. Thinking that if it was going to be anything like that Monster's Lair, they should avoid it at all costs, they tried exploring the path straight ahead. It looked to be the kind of place where a Goblin Shaman might hang out, so they entered cautiously. 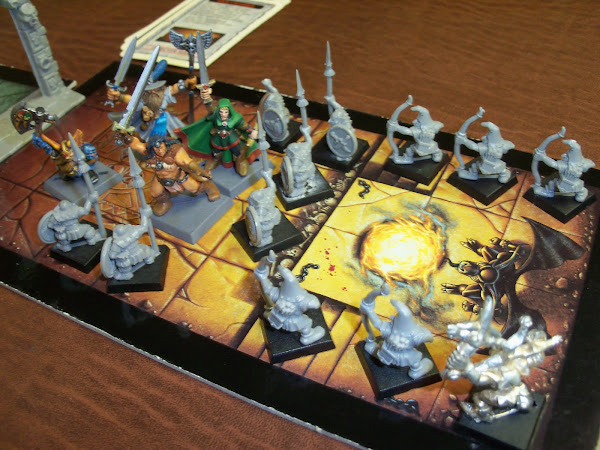 Just as they expected, the Goblin Shaman they were after, and 11 Goblin bodyguards, were in the Idol Chamber. The Elf immediately killed the Shaman with a skillful shot from his bow. The Wizard took out another, but the Barbarian and Dwarf failed to pull their weight. The Goblins, however, were enraged by the death of their leader and fought ferociously, nearly killing the Elf and badly wounding the Dwarf and Wizard. 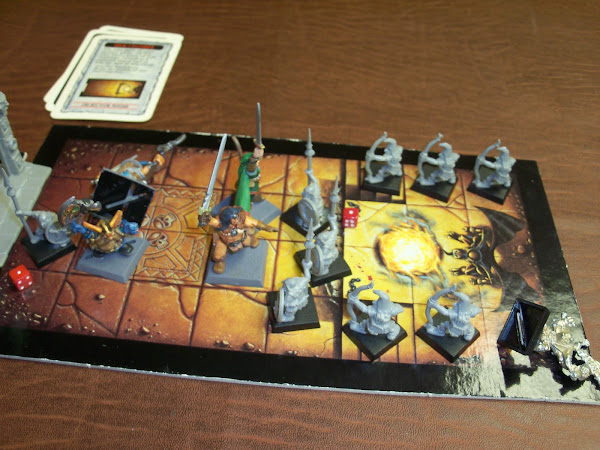 The adventurers continued to utterly fail at hitting the weedy Goblins. Seeing the situation was dire, the Dwarf blew his Horn of Shielding, but it was not enough to save the Elf or Wizard. Both were fatally skewered by Goblin spears. 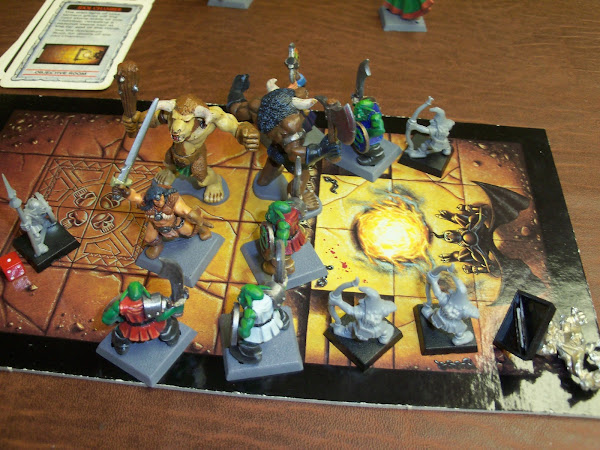 The Barbarian and Dwarf were on their own now, and unexpectedly attacked by six Orcs. The Barbarian and had enough, and went completely berserk, but in his rage managed to miss the Orcs with his clumsy attacks. But one mighty swing from the Dwarf killed two Orcs and a Goblin. Things were looking pretty hopeless, and then two more Minotaurs showed up. 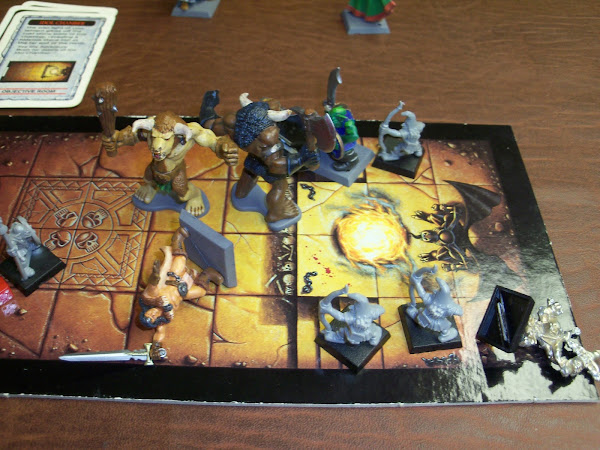 The last two warriors fought bravely, with the Barbarian dragging three of the Orcs down with him, but they really stood no chance. They had succeeded in killing the influential Goblin Shaman and ending the threat of his cult. They undoubtedly had saved many lives by giving their own, though no one would ever know of their noble sacrifice.
Posted by Craig Welter at 6:08 AM