Deep in the ruined cities of the Dwarfs, now occupied by Orcs, Goblins and even worse creatures, many of the once noble temples and shrines have been defiled. In their place are crude altars set up by these evil creatures, dedicated to all manner of foul Gods. Apart from the obvious pleasure of killing the invaders of their ancestral homes, and hopefully recovering some of the long-lost treasures, the Dwarf Kings also pay a rich reward for every evil temple destroyed.

The Warriors have been charged with the task of locating one of these temples that is reputed to lie deep below the ground in the ruins of Karak Azgal. Kargun Skalfson, deposed Lord of Karak Azgal, has allowed the Warriors into the ruins to search for the temple, and has waived his right to a share of any treasure they discover on the way - as long as they bring back evidence of the destruction of the temple.

Secretly, Skalfson does not believe there is a temple, and therefore hopes to persuade the Warriors to venture into the most dangerous regions of Karak Azgal in search of it. If they survive these hazardous, long-unexplored regions, they will surely find a great deal of treasure - and as there is no temple, he will gain his share of the treasure as usual.

A Barbarian, an Elf, a Wizard, and a Dwarf walk into a dungeon. They've been tasked with destroying an evil Idol set up in an evil shrine in the depths of of an ancient Dwarf ruin. 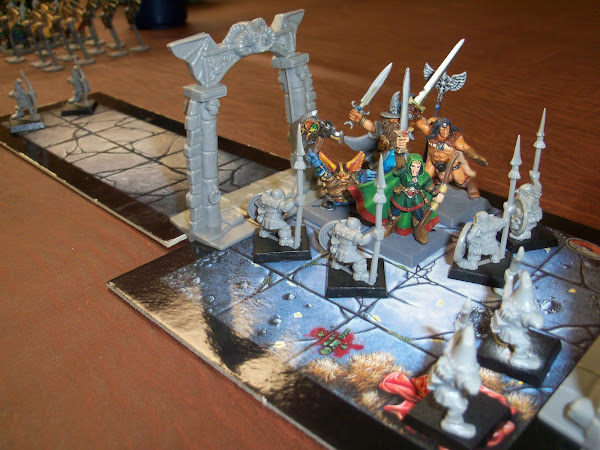 Before long, the warriors encounter a Monster's Lair, and are set upon by four Goblins with spears and another four with bows. They handle this first encounter easily. In the room the Barbarian finds a Fanged Death Helm, which he immediately wears. In addition to looking really cool, the helmet allows him to headbutt his enemies for extra damage. No doubt he was already headbutting as much as possible, but now it would actually have a chance of causing some harm. 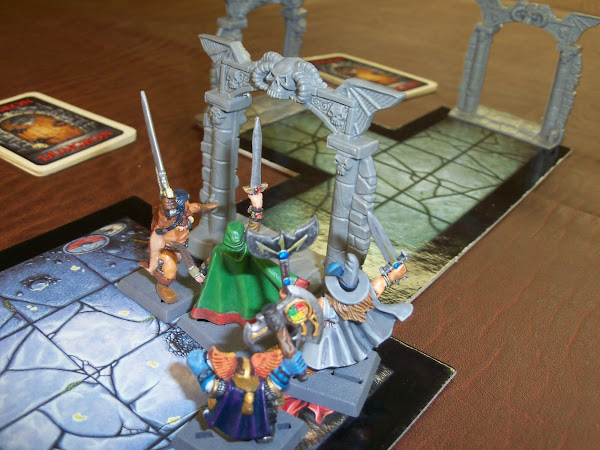 The group then came to a T-junction, and had no way of knowing in which path would lead to the idol they sought. 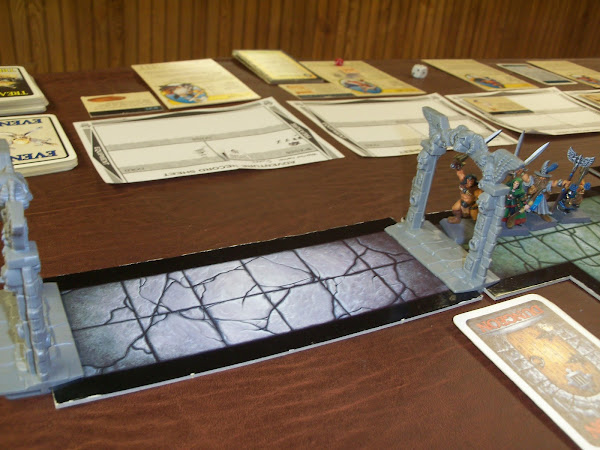 The Barbarian chose to straight path, leading into an innocent looking passageway. 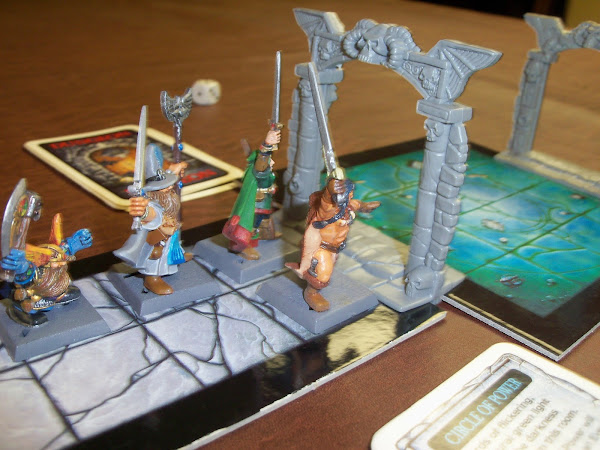 The passageway led the adventurers to a room with an eerie, sinister glow.

Before they could enter strange glowing room, they were unexpectedly ambushed by Giant Rats! The Barbarian and Dwarf were both badly wounded by the rats, though they were dispatched quickly. While avoiding the rats, the Elf found a Fleet of Foot scroll. The party then proceeded into the next room... 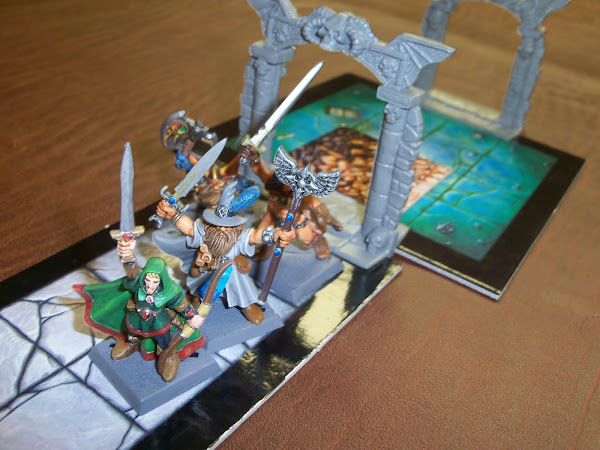 ...and immediately triggered a cave in! In a panic, the Elf read his fleet of foot scroll and ran as far out of the room as he could, the others following behind. The falling rocks completely blocked their way. They would have to hope that their destination could be reached by traversing the other path. 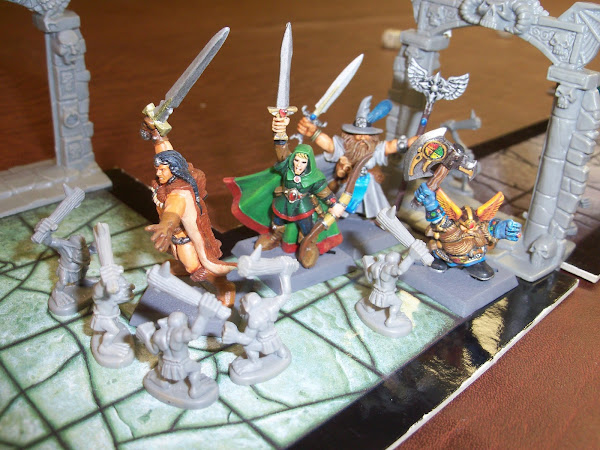 Back where the path split, the heroes were ambushed by a group of seven Snotlings. They posed little threat, in fact the Barbarian was able to cut down four of them with a single stroke. Bizarrely, one of the Snotlings carried the fabled Bow of Tor Alessi, and Elven artifact taken by the Dwarfs upon the fall of the ancient Elf city of Tor Alessi in ages past. Keeping the ancient antagonism alive, the Dwarf kept the bow for himself (and his people), though he admitted to being unable to use such a weapon. 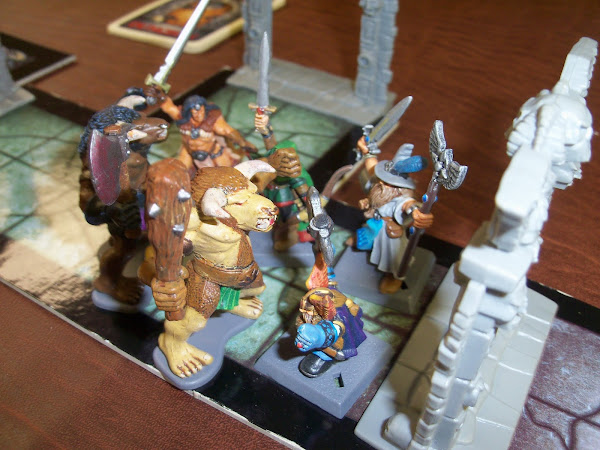 While the group argued over the bow, a pair of Minotaurs were able to sneak up on them. It must have been a loud argument, or particularly stealthy Minotaurs. 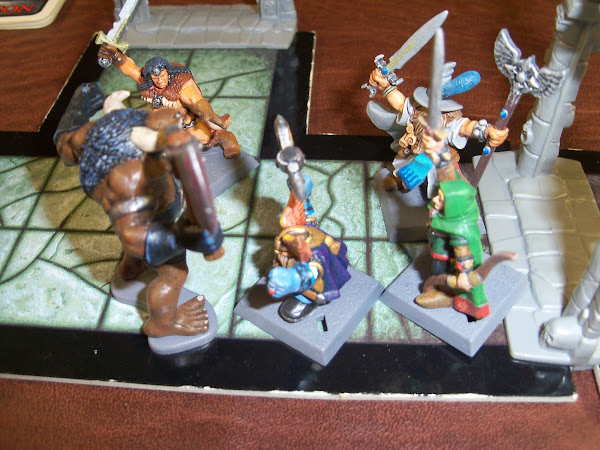 Combined hits from the Elf, Wizard, and Barbarian (including a vicious headbutt) badly wounded one of the Minotaurs, while the Dwarf was putting away his shiny new bow. Seeing it so near death, the Wizard then read out the words of power on his Hand of Death scroll to finish off the beast. Meanwhile, the remaining and unharmed Minotaur brutally attacked the Elf, bringing him near death. Luckily, the Elf was able to drink his healing potion, which magically returned him to full health. He then immediately moved away from the rampaging monster. 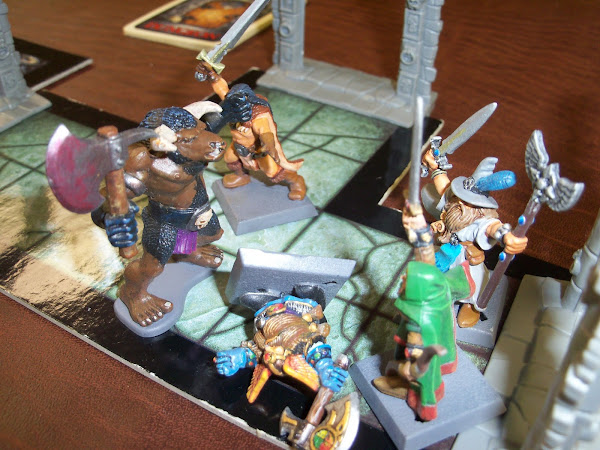 The second Minotaur proved to be a much more skilled foe, and none of the heroes were able to land a blow on it. In turn, the creature pummeled the Dwarf, knocking him nearly unconscious. The Wizard quickly tapped into his remaining power store to cast Lifebringer, magically healing the Dwarf enough to get him back up on his feet. 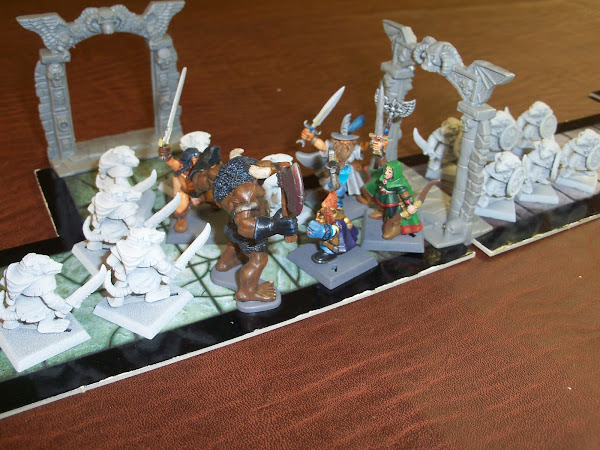 The luck of the adventurers continued to deteriorate, as 12 Skaven leapt out of the shadows to attack the weary warriors. 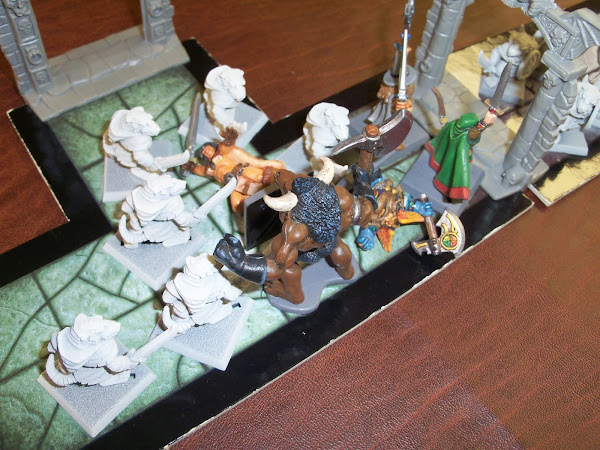 Near exhaustion, the heroes could scarcely manage to defend themselves. The Wizard was able to cut down two of the vile ratmen, while the rest struggled just to survive. The Minotaur and three Skaven just managed to defeat the brave Barbarian, but one lucky Skaven sword thrust was enough to finish off the already badly hurt Dwarf.

The Elf and Wizard knew they had no chance of surviving against such odds. They put out the lantern and took their chances trying to sneak out in the darkness. The Elf, unfortunately, lost his way, and died of his wounds trying to find they way out. The Wizard was luckier, and just barely managed to escape the dungeon with his life.

The Wizard had a brief and uneventful journey to the nearest village, where he met another group of wandering adventurers in need of a Wizard. He joined up with them, determined try his luck once again in the dungeons of the Old World.
Posted by Craig Welter at 7:02 AM