The great Wizards of the Empire have scried out a powerful, brooding power that is growing below the ancient Dwarf hold of Karak Azgal. As yet, they believe the presence to be relatively weak, and therefore probably bound to some material artefact such as a statue while it gathers strength.

Although they do not know its purpose, they suspect that it may be a lesser daemon of the Chaos Powers, trapped in the rocks below the earth in ages past, and freed by the incessant digging of the Goblins and Orcs as they search for the lost treasure of the Dwarfs who once inhabited the city. The truth is that the daemon has escaped the prison of rock that held it for so long, and is now resident in a statue of a great fire dragon in an ancient temple (the firechasm). Soon it will fully awaken, and walk the world once more. The Wizards have employed the Warriors to destroy the daemon and ensure that this never happens. 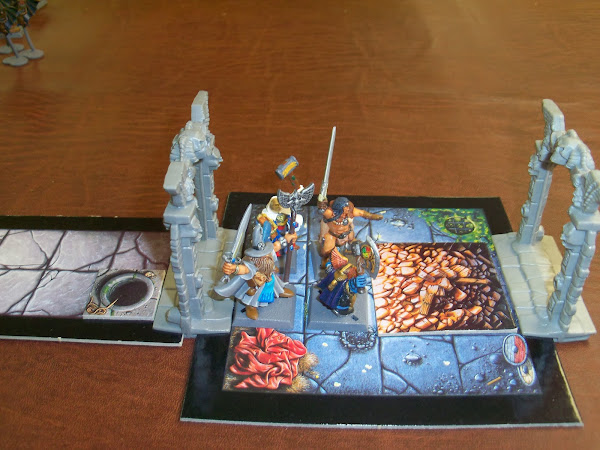 In the very first room of the dungeon, the Wizard manages to fall into a pit. He climbs out with the use of the Dwarf's rope, right before a cave in of the dungeon prevents any further advancement. So the hapless warriors give up and head for a different dungeon, having accomplished absolutely nothing. 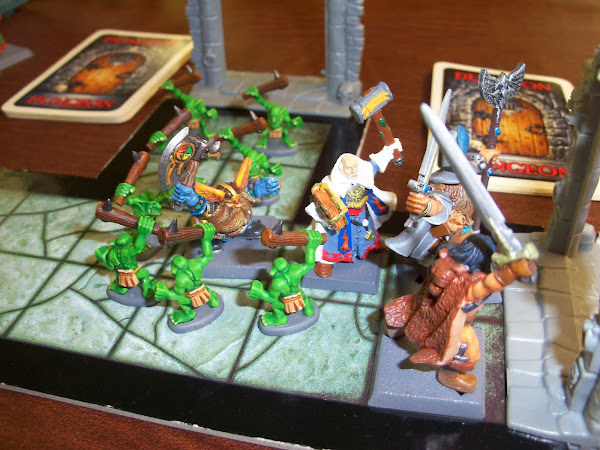 So the warriors set out to find the Firechasm containing the daemon-possessed statue, and immediately their path splits in two directions. Their leader determines to go straight. As they areabout to proceed, the heroes aresuddenly set upon by a group of Snotlings, who gang up on the Dwarf, badly wounding him. 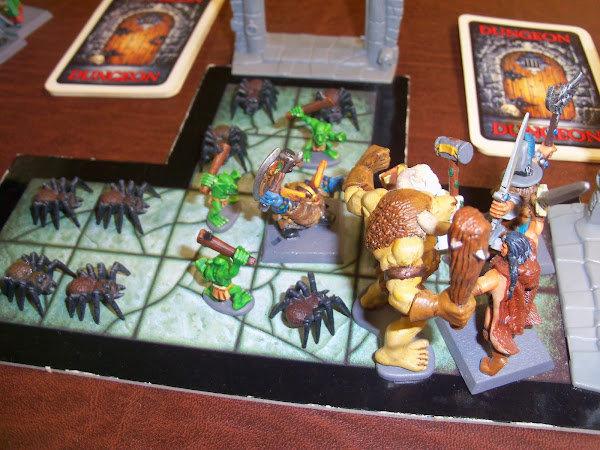 They barely have time to clear out some of the pesky Snotlings before the noise brings a Minotaur and nine Giant Spiders to the fight. Reacting quickly, the Priest casts a blessing on the Dwarf, allowing him an additional attack. Attacks from the Barbarian and Dwarf, combined with the Wizard using his Hand of Death Scroll, finish off the Minotaur before it has a chance to do any damage. However, while focusing on the Minotaur, the Dwarf is again wounded by the Snotlings. In it's first use, the Warrior Priest's Ring of Jade manages to sap two more wounds from the Dwarf, bringing him to the brink of unconsciousness. 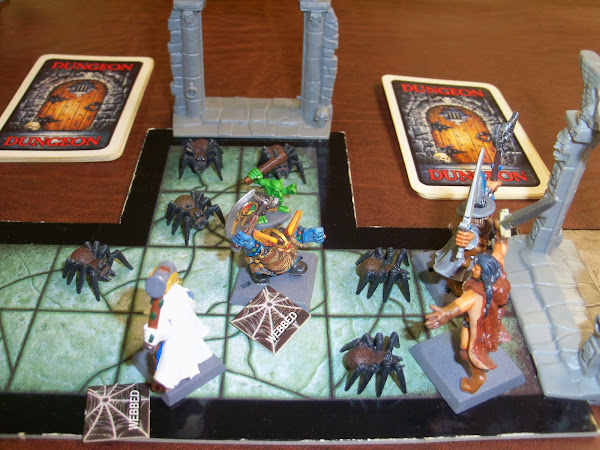 The Barbarian flails around in mindless fury while the others do their best to clear the room of monsters. The Dwarf and Warrior Priest take the lead, but both are webbed by the Giant Spiders. The Barbarian continues to flail about, knocking the poor Wizard around. While attempting the avoid the flailing Barbarian, the Wizard uses his Freeze spell to destroy four of the remaining spiders. The Priest frees himself from the spider webs, only to be webbed up again. 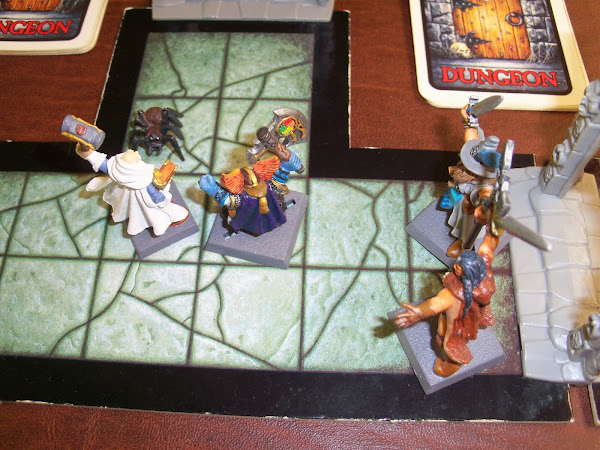 Yes again the Barbarian flails in impotent rage, while the others manage to finish off the remaining Spiders. After the battle the warriors find two magic swords: the Ensorcelled Blade and the Wall of Steel, as well as an Amulet of Power. 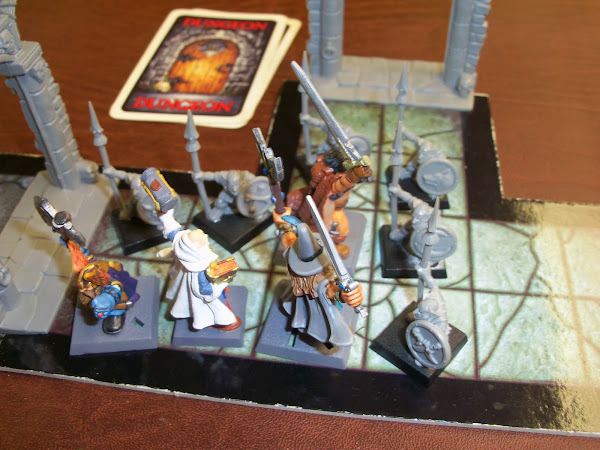 The party continues ahead through a corridor and into yet another junction, where they are unexpectedly attacked by six Goblins. They are obviously caught off guard by the attack. The Barbarian yet again flails about, while the Goblins badly wound the Warrior Priest. Thankfully the Wizard's use of the healing hands spell has kept the warriors in fighting shape. 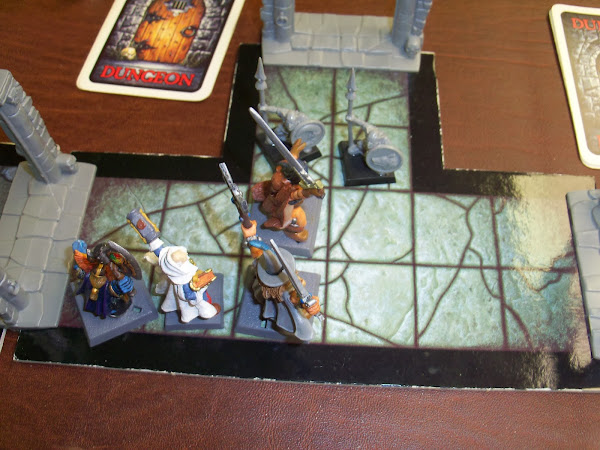 The Barbarian again flails about aimlessly, while the Wizard and Dwarf recover from their surprise and take out their share of the Goblins. 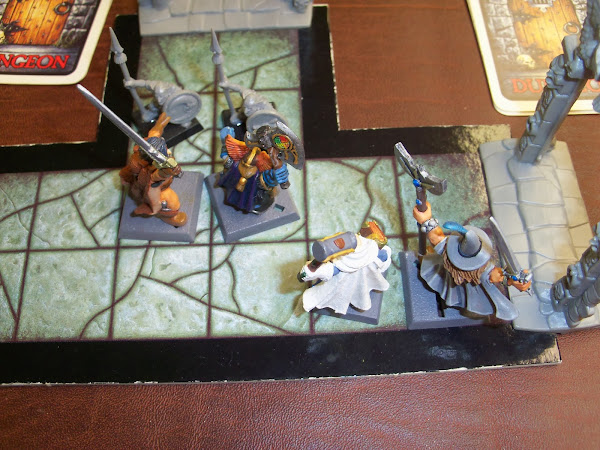 Finally the Barbarian has had enough, and goes completely berzerk on the remaining two Goblins, annihilating them in brutal fashion. On one of the Goblin corpses the Wizard finds a healing potion, with enough for two doses, each capable of completely healing a warrior no matter how badly wounded. Now that they have seen that the Barbarian is capable of actually taking out his aggression on an enemy, the Warrior Priest takes the opportunity to sell his Ensorcelled Blade to the big brute, hoping he can put it to good use. 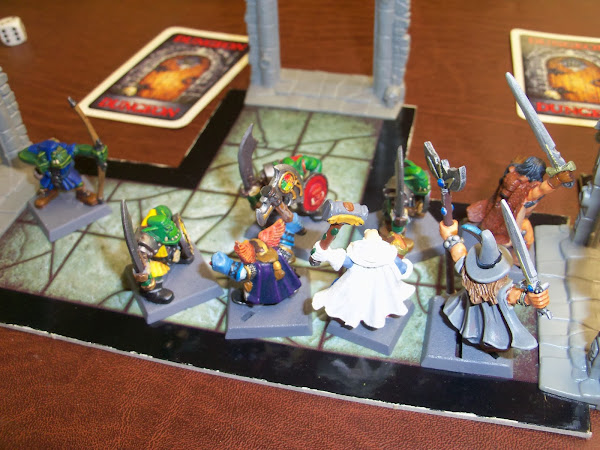 Just a few steps later, the Warriors are attacked by 4 Orcs, one armed with a bow. This time the Barbarian instantly goes berzerk on the unfortunate Orc that decided to go after him. 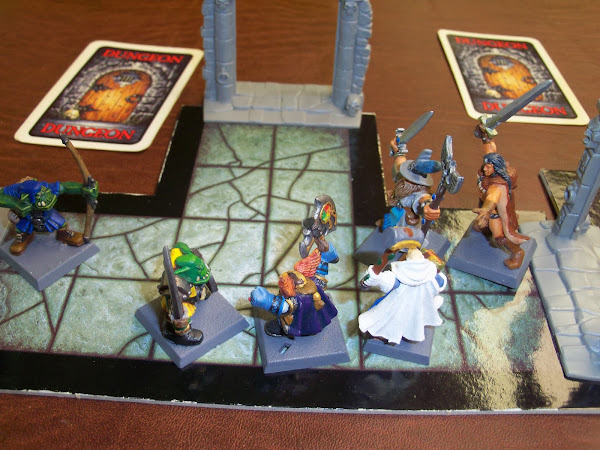 The Wizard steps up to help, but only manages to block off the raging Barbarian from the fight. 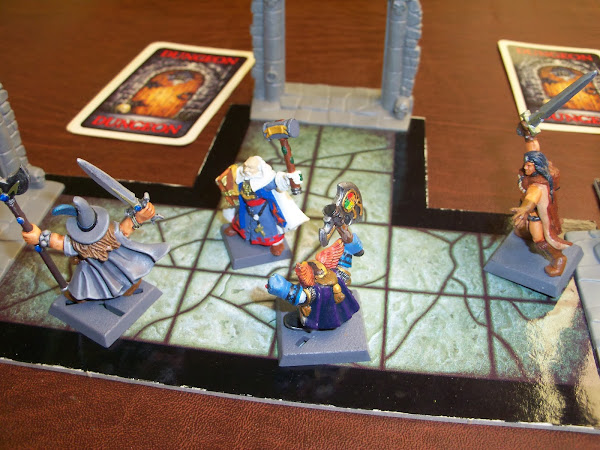 Without the Barbarian's aid, it takes a while to defeat the Orcs. Eventually the task is completed without much harm done to the warriors, and the priest finds a magical Runestone of Death on one of the greenskins. 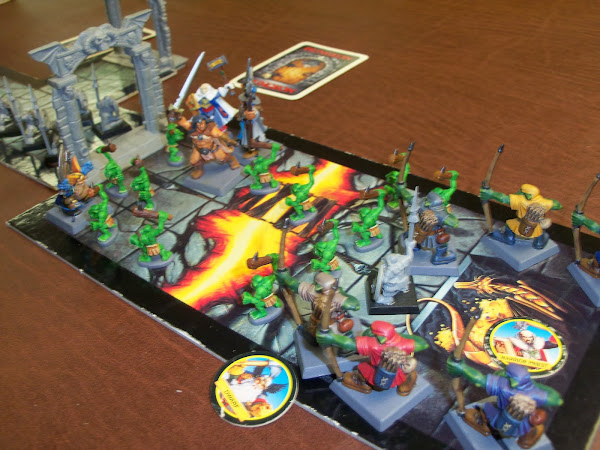 In the very next room, the warriors find the Firechasm. By choosing the correct path (that being straight ahead), the Barbarian has successfully led the party through what has turned out to be the shortest dungeon in the history of the Old World. In the objective room, they are greeted by 12 Snotlings, 6 Goblins with spears, and another 6 Goblins with bows(who are so large they look a lot like Orcs with bows...) 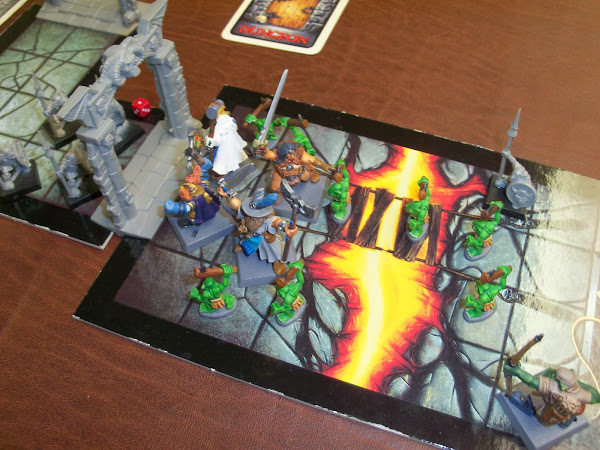 The Warriors set about clearing the monsters from the room. The Wizard casts his Freeze spell to eliminate five of the Goblin archers in the back. The Barbarian goes berzerk and kills many, many little Snotlings. The Wizard taps into his power store to Freeze three more of the Goblins, helping the Dwarf and Warrior Priest clear out the adjoining room. Before long, their foes are vanquished, and the adventurers find a Bow of Loren lying about, which none of them can figure out how to use. 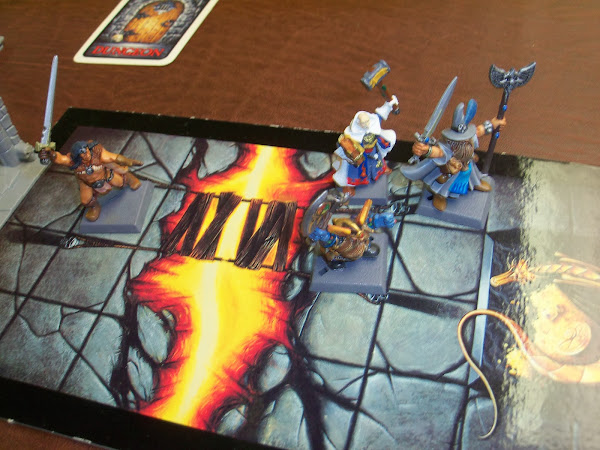 The Wizard crosses the chasm without incident, but fails to destroy the statue with his magic sword. In attempting to follow the Wizard across, the Priest drops his Runestone of Death into the fires below. The Barbarian then crosses the rickety bridge easily and with one mighty swing destroys the statue, banishing the Daemon back to the hellish realm from whence it came.

After an incredibly successful adventure, the party of warriors had a fairly disastrous trip to civilization. On their way to town, the each lost a treasure, and in addition the Dwarf lost the magic sword he hadn't needed to use on the daemon statue, and the Wizard lost the Elf healing potion he had started the adventure with. This meant the Wizard quickly went from having three drinks of potion that could completely cure all wounds, to having zero.

On reaching the village, the Barbarian sold the useless Bow of Loren, splitting the gold equally amongst the warriors. He then lost his Ensorcelled Blade, the last remaining treasure from the entire adventure, in a game of chance. He did, however, manage to acquire a lovely Quarg Horn. The Dwarf was kicked out of town immediately. Obviously The people of this town were prejudiced against Dwarfs. The Warrior Priest did some preaching in the streets, impressing many, and earned himself a loyal companion in the form of a pet dog.

On the upside, the Barbarian bought a shield and throwing axe, improving both his offensive and defensive capabilities. He also bought a mule and cart for the party to use on their future travels, having learned the hard way how much can go wrong just trying to get back to civilization. After this, the party set out on their next adventure.
Posted by Craig Welter at 12:29 PM