Rumours abound of a powerful long-lost Skaven artefact that has been rediscovered in the Worlds Edge Mountains. The artefact is a skull-shaped icon made from raw warpstone, and its mutating powers are said to be beyond imagination. The icon must be destroyed at all costs to stop the Skaven reclaiming it. Unfortunately, the only way to destroy the icon is to hurl it into the cleansing flames of the firechasm.

I did something a little different this time, and put the captions directly on the images for more of a comic book styled report. You can click on the images to see larger versions so the text is easier to read. Let me know what you think of the new format. 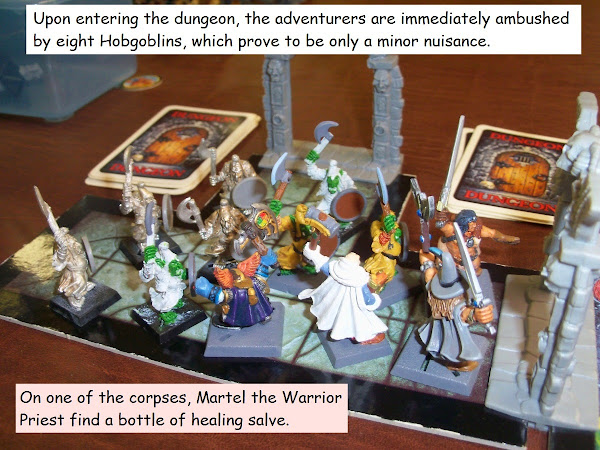 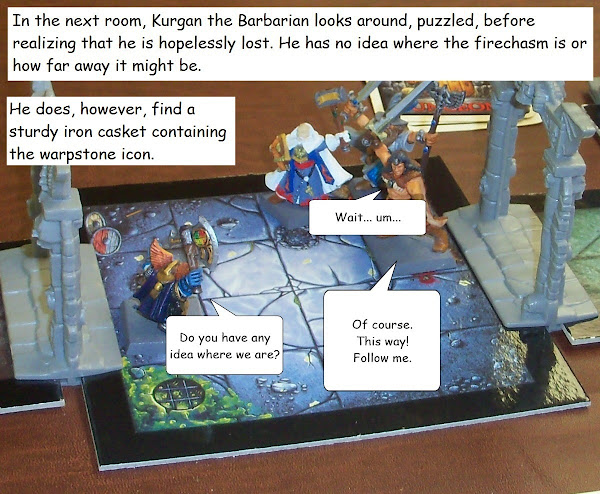 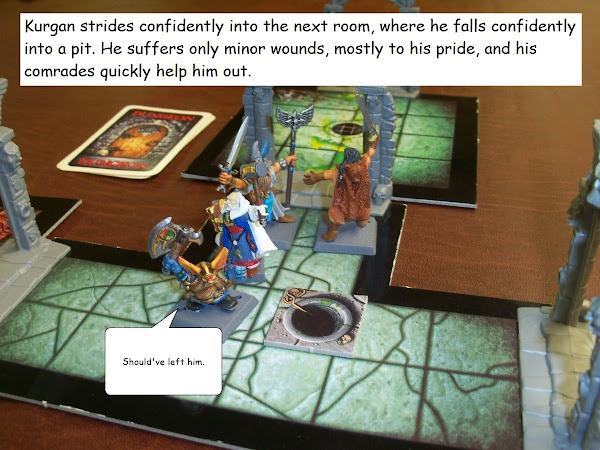 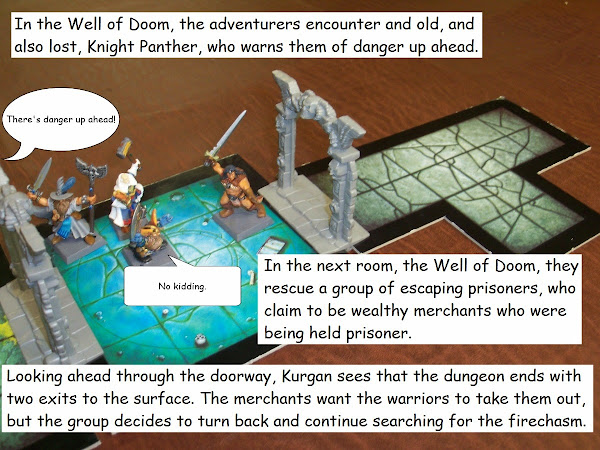 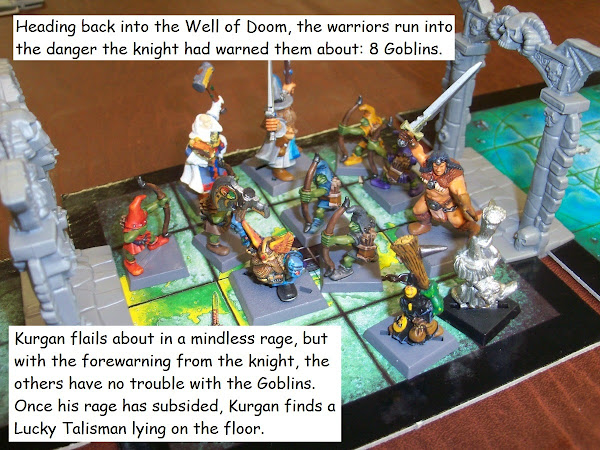 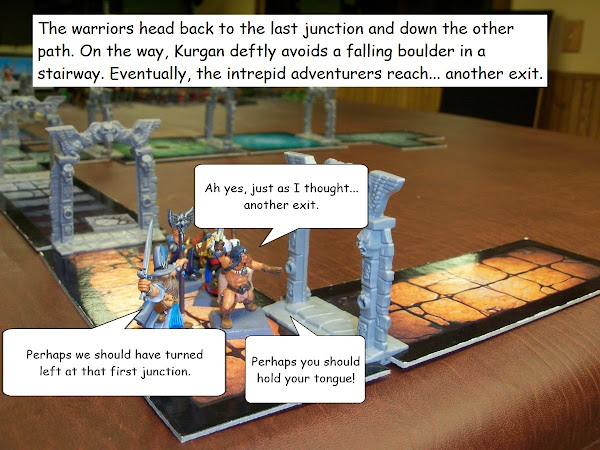 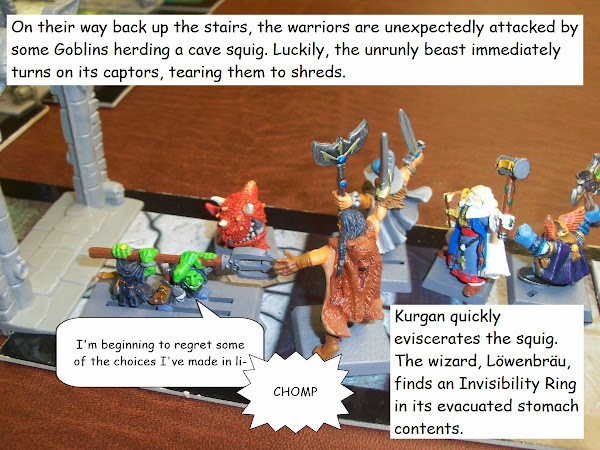 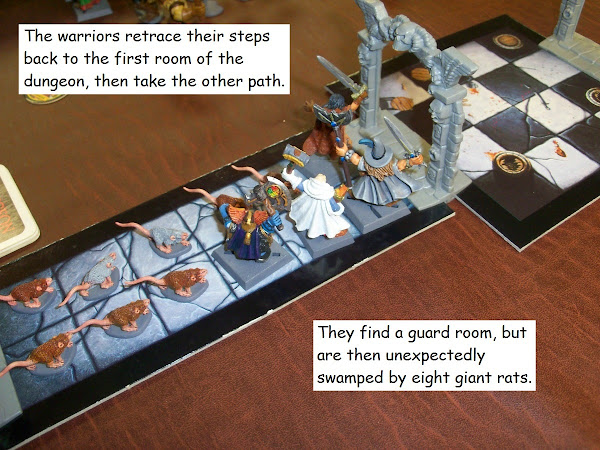 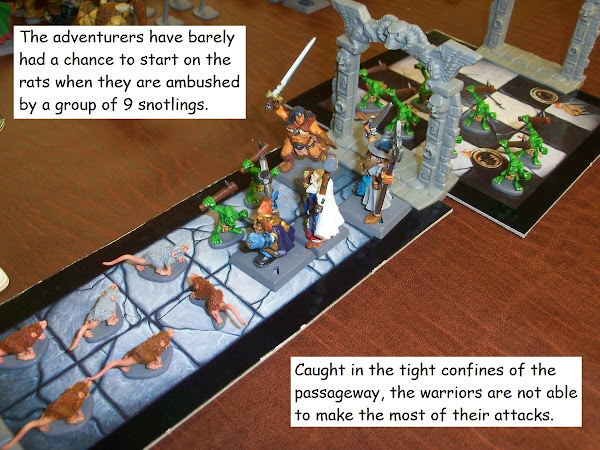 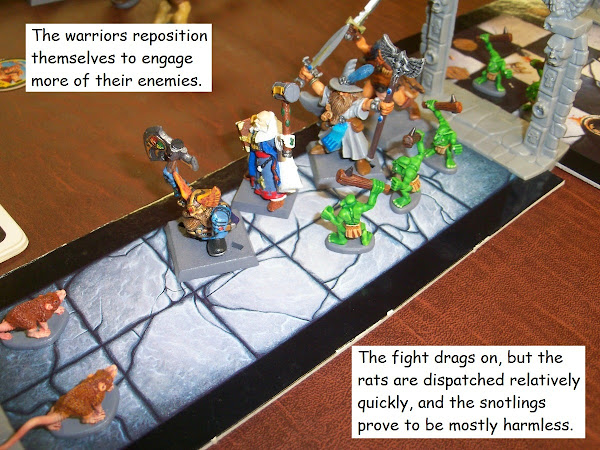 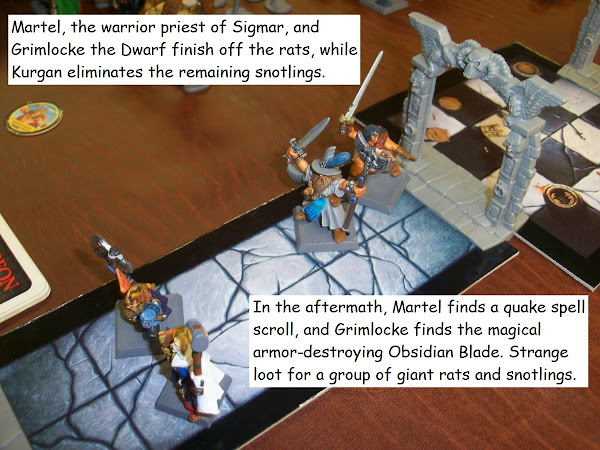 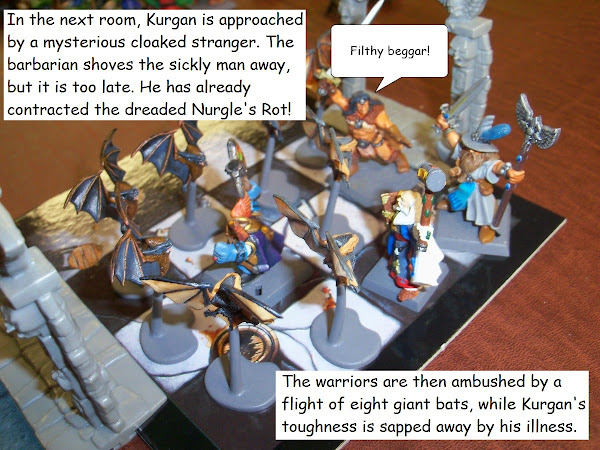 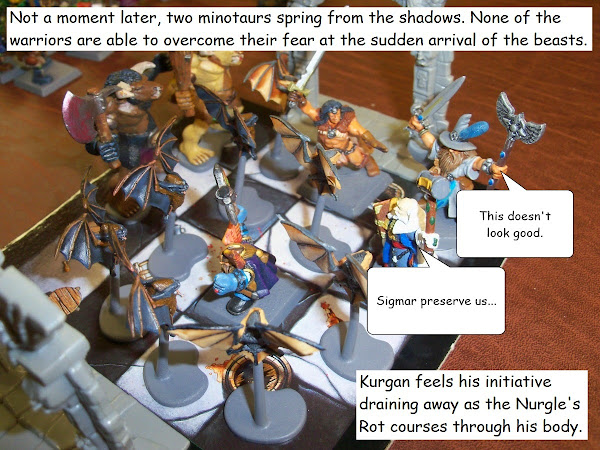 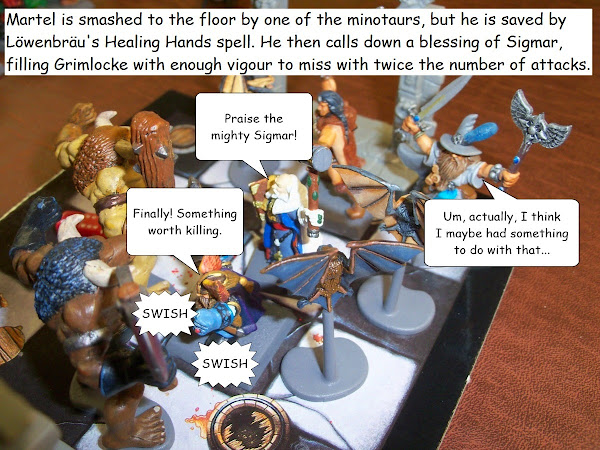 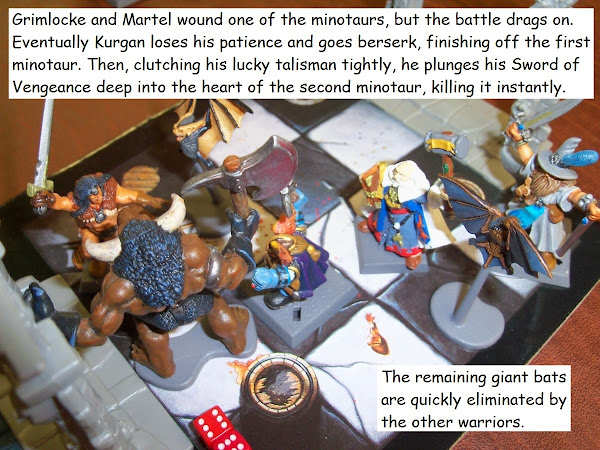 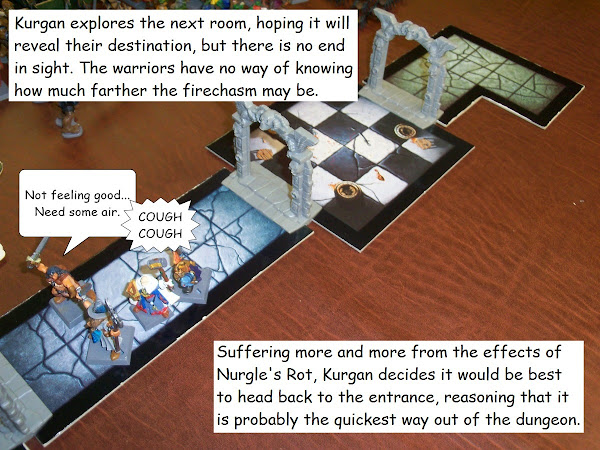 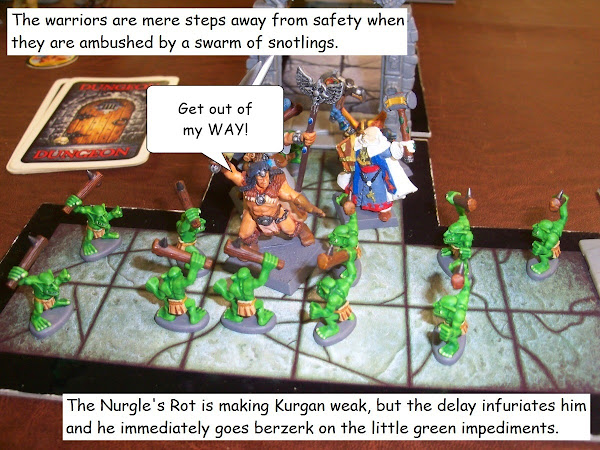 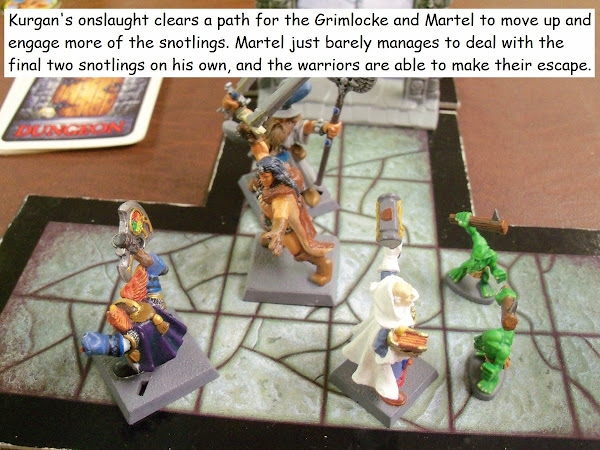 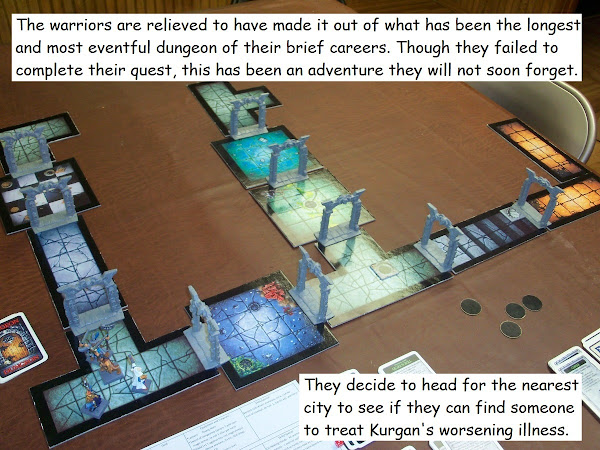 The warriors set out on the six week long journey to find a city, in order to get treatment for the Nurgle's Rot plaguing Kurgan, and to drop off the merchants they rescued from the depths of the dungeon. On their way, each warrior lost a piece of treasure in a brutal storm. Luckily, they mostly just lost the useless treasure they had received from the Lords of Zhufbar as reward for completing their previous quest.

Five weeks into their journey, the adventurers came upon a massive chasm blocking their way. Their only viable option was to ditch their cart and perilously make their way across (including the rescued merchants) on lengths of rope. Perhaps leaving the cart behind was for the best after all, as the very sick barbarian was growing weary of pulling it.

On the final week of their journey, the warriors stumbled upon a witch's cave. This sounds pretty bad, but is ironically about the best thing that can happen to a band of adventurers travelling the Old World. Potions bought from the mysterious witch grant Kurgan and Martel each an additional wound, and give both Grimlocke and Löwenbräu additional toughness for the course of their next quest.

Upon arriving at the city, the rescued merchants rewarded the adventurers with 1000 gold each for their assistance. Kurgan ended up spending 2000 gold treating his Nurgle's Rot, after which he was completely healed. Grimlocke was finally able to visit a Dwarf Guild Master, which he had been looking forward to. Unfortunately he must have come on just the wrong day. His excitement quickly turned to disappointment upon discovering that literally nothing was in stock. He was, however, able to get a healing rune placed on his axe, and also bought himself a nice warhelm. Martel bought some gear, including a mule and cart, and ended up making 1000 gold simply by preaching in the street a few times on his uneventful days. He must be quite a fiery orator, or perhaps the crowds just like his loyal pet dog.

Löwenbräu took the opportunity to receive some advanced training, increasing his battle level. He learned two new spells: Resurrection and Ogre Strength, as well as gaining additional wounds and power store. Before leaving town, he sold some treasure and spent the rest of his money buying a musket, along with enough powder and shot for the next dungeon. Since he is always in back being protected by the other warriors, this should allow him to participate more in the monster killing.

Having prepared as best they could, the warriors were ready to set out for their next adventure. They now had a decision to make. Should they go back to the dungeon they just left and try to complete their quest, or move on and find a new quest? Kurgan decided it wasn't worth going all the way back to that dungeon to complete the destruction of the warpstone icon. After all, that dungeon turned out to be huge, resulted in Kurgan coming down with Nurgle's Rot, and they still had no idea how far they were from finding the firechasm. The warriors would therefore look for a new quest to undertake for their next adventure.
Posted by Craig Welter at 8:00 AM