Below the lost Dwarf stronghold of Karak Vlag, the ancient forge fires still burn. Now occupied by evil creatures, the flames’ magical energies are being used to create chaotic and cursed weapons. The forges must be extinguished before their new masters learn how to manufacture weapons of even more awesome power.

The Dwarf Lord of Zhufbar is host to the descendants of the lords of Karak Vlag, and shares their fears. Although the quenching of the ancient flames seems an act of unthinkable wrong, it is the only option available to prevent the creation of a greater evil.

The exiled lords of Karak Vlag know that only the first item forged in the magical fires - a ring - can extinguish the flames. As the ring is an ancient Dwarf treasure, it must be hurled into the chasm by a Dwarf. If the Dwarf is killed, then the Warriors have, by default, failed.

The Warriors must first defeat the guardians of the firechasm, as only then can the Dwarf hurl the ring into its depths. The ring in question is located on one of the claws of a dragon statue that decorates the firechasm. 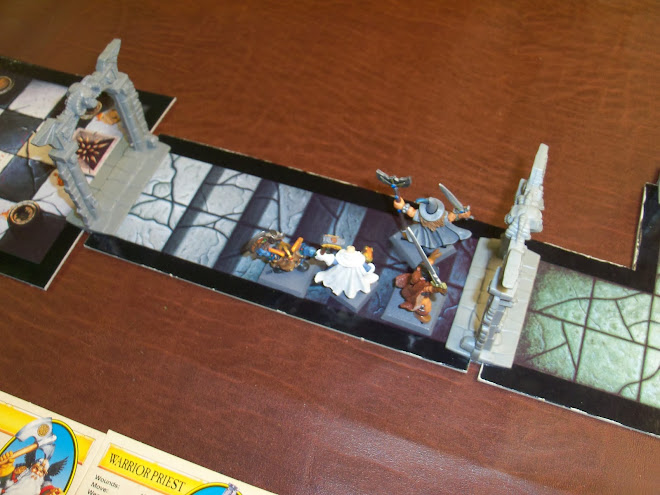 Upon entering the dungeon, Kurgan the Barbarian immediately falls into a pit of spikes, nearly dying. He and Martel, the Warrior Priest, are then both struck by lightning from a pole in the ceiling. Kurgan would have met his end in that pit of spikes if not for the Wizard's magical Healing Hands. After hauling the Barbarian out of the pit, the group continues on their way. 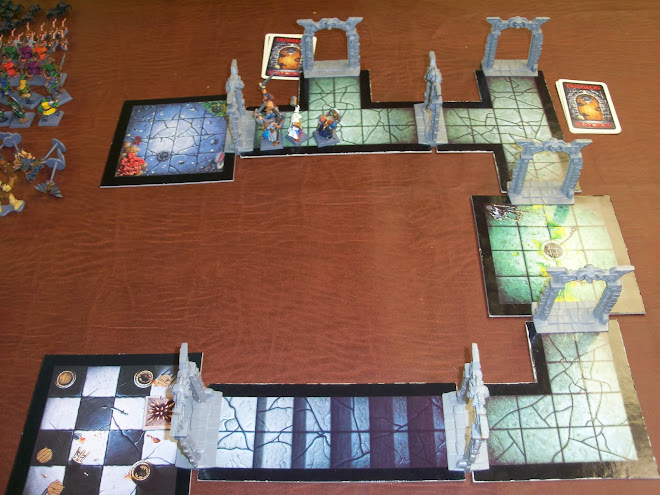 They continue through the dungeon, meeting little resistance along the way. The adventurers easily defeat a group of 12 ghouls and a handful of zombies along the way, which barely slow them down. They eventually reach a point where the dungeon forks into three paths. Exploring the first, they find a dead-end. 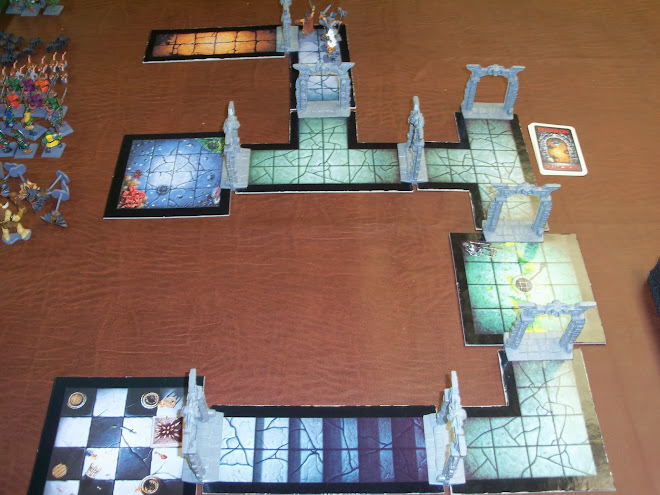 Down the second path are two long hallways, which eventually also lead to a dead-end. 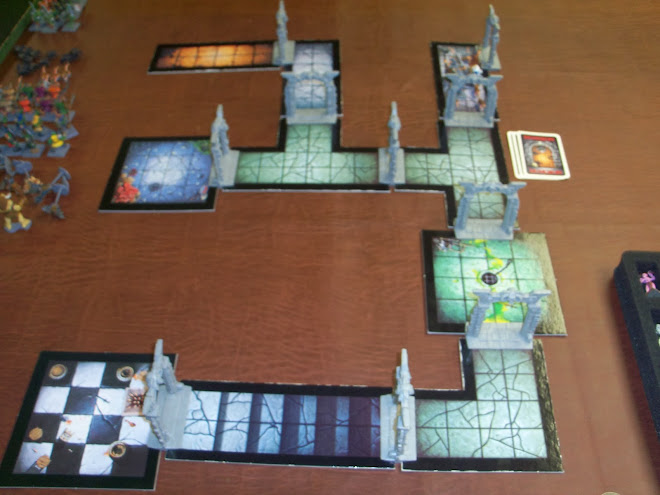 The warriors then proceed down the final path, hoping it will finally lead them to the their goal. At this point the party is attacked by two Minotaurs, and each warrior succumbs to his fear of the monsters. Thinking quickly, the Wizard uses his magic sword from their last adventure, which he didn't end up using to banish the daemon. The powerful magic kills one of the Minotaurs instantly. However, overcome by their fear, the warriors continue to send their attacks wide of the monster again and again, and it takes a long time before they are finally able to bring the hulking beast down. (Minotaurs become even more brutal in the advanced rules, since you need to roll 5+ to avoid being afraid of them, and if fail, you are then -1 to hit, and on top of that there was some really terrible rolling here).

While they fought with the Minotaur, a stranger claiming to have been sent by the Lord of Zhufbar came to tell them of a change in plans. He said the mission to the Firechasm to extinguish the flames needed to be delayed, as it was currently far too dangerous, and he advised them to turn back. Unfortunately, during the fight a portcullis had closed behind the warriors, blocking any potential escape route. They had no choice now but to continue on and take their chances. 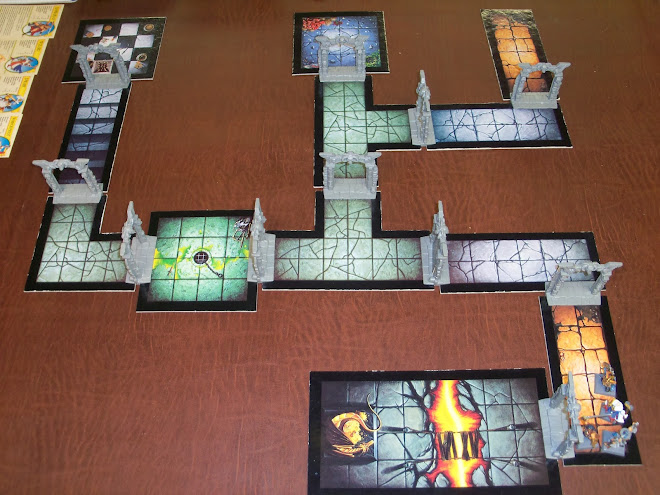 Just down the next corridor, the adventurers discover the chamber containing the firechasm. 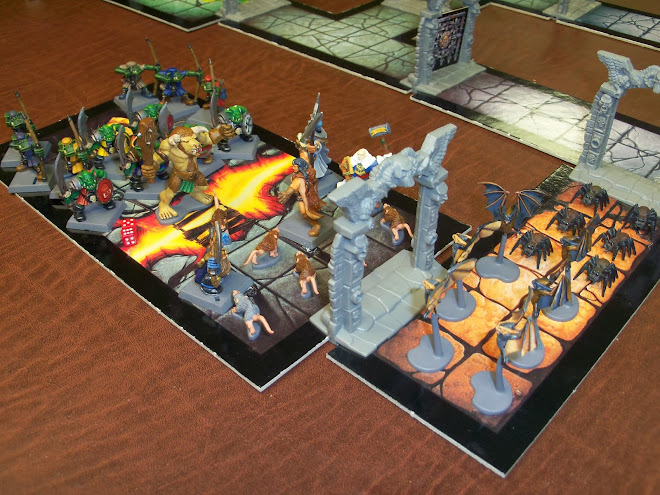 Stepping into the room, the warriors discover that the mysterious stranger had told the truth, and they are quickly surrounded by monsters. This time they manage to master their fear of the minotaur. They first clear out the rats, which can be cause a lot of harm if underestimated. 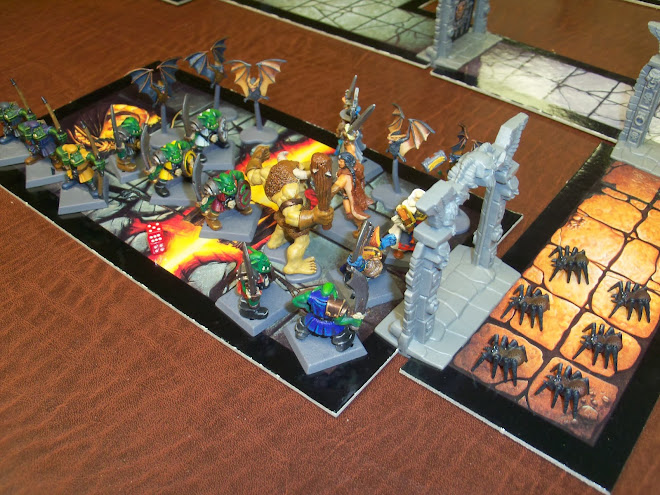 Kurgan the Barbarian throws his spear at the minotaur, and then he and the Dwarf finish it off up close. The Wizard, Löwenbräu, uses his Freeze spell to clear out some of the Orcs from the back of the room. 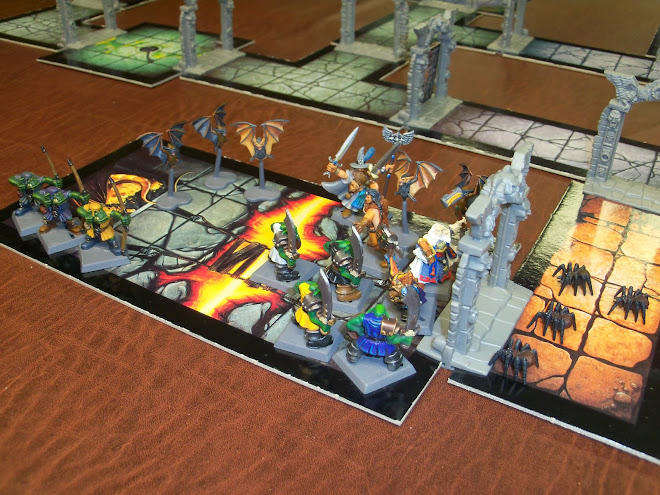 The Warriors continue to fight their way through the Orcs, bats, and giant spiders, kept alive by Löwenbräu's magical healing. The Wizard's position next to the firechasm keeps him well protected from the monsters. 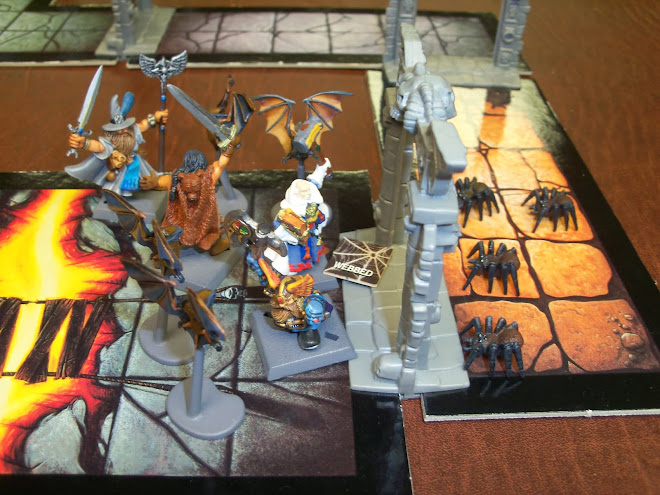 The slashing blades of Kurgan and Grimlocke finish off the closer Orcs, while Löwenbräu's freeze spell eliminates the remaining Orc archers. This leaves only the pesky bats and spiders to deal with. 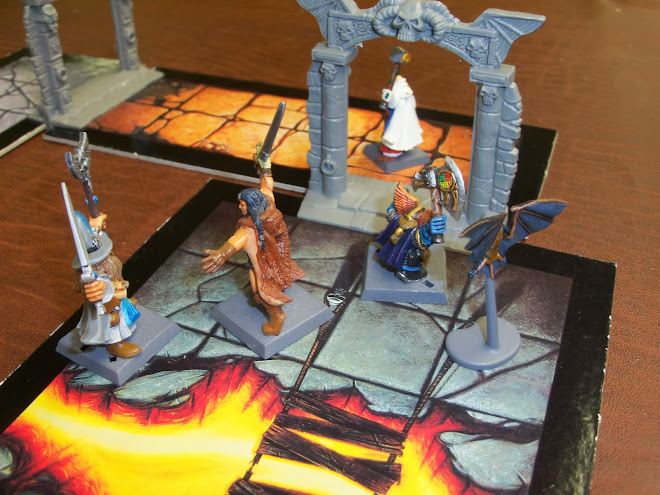 The group is forced to split up a little to finish off the remaining monsters quickly, but it is never wise to linger in one place too long when exploring the dungeons of the Old World, and the battle was beginning to drag on too long. 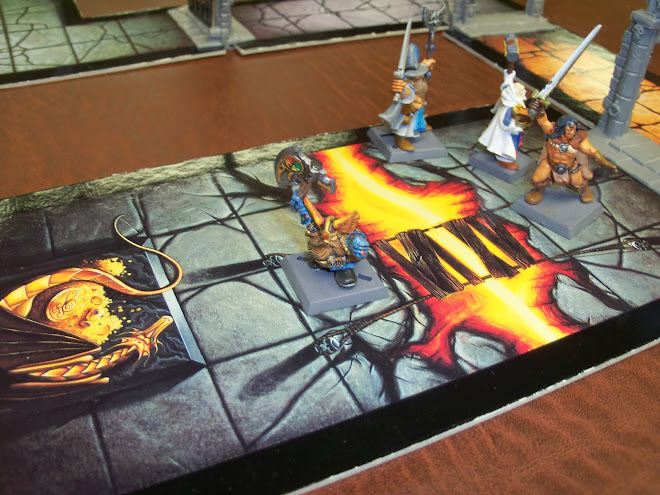 After defeating the monsters, Kurgan finds the mighty Sword of Vengeance lying about the room. With the monsters eliminated, Grimlocke crosses the firechasm to retrieve the ring from the claws of the dragon statue. 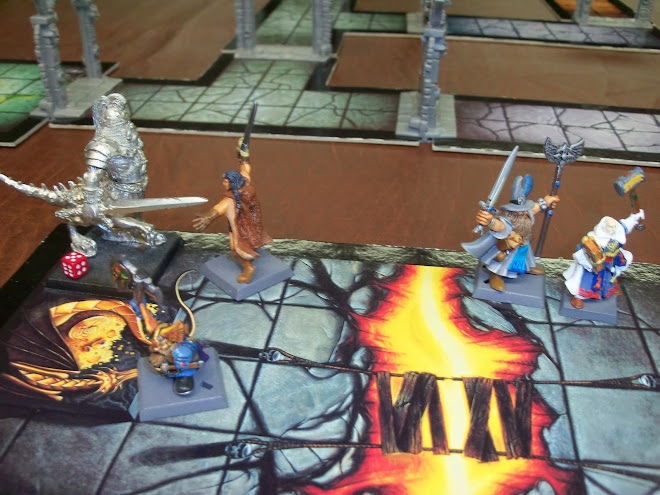 The ring is stuck on the claw of the dragon statue, and Grimlocke makes a racket trying to dislodge it. The noise wakes a centaur which had been sleeping in the corner of the room (or perhaps it drops in from the ceiling?) which proceeds to attack the warriors. Kurgan is the only one of them not afraid of the beast, and he charges across the rickety bridge to engage it in combat. 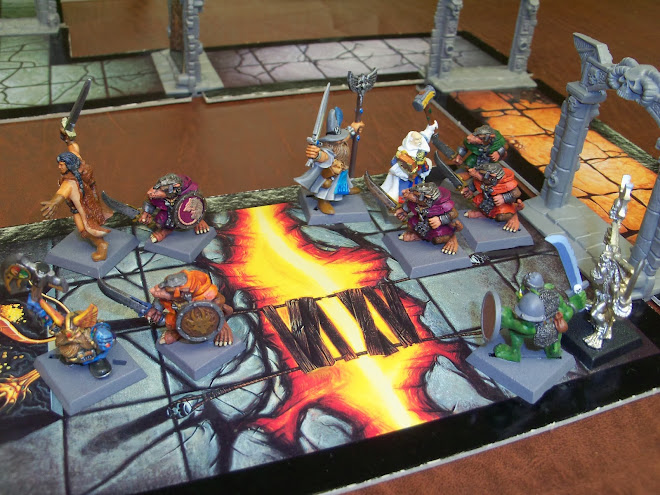 After a brief struggle, Kurgan kills the centaur. However, he has left Martel and Löwenbräu alone on the opposite side of the firechasm. Grimlocke again makes a racket trying to yank the ring off the dragon statue, and suddenly a group of escaped prisoners run in the room begging for help, followed by several Skaven warriors clearly attempting to recapture them. Almost immediately afterward, the winds of magic abandon the Wizard, and a Savage Orc Shaman shows up, accompanied by another Savage Orc as a bodyguard. 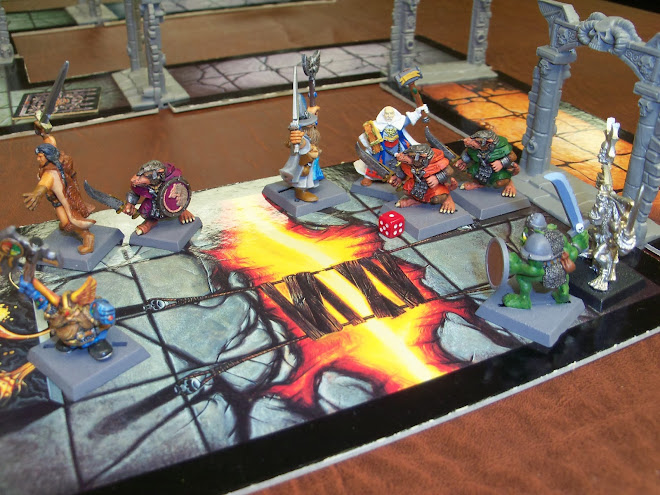 Distracted by the fleeing prisoners, the warriors struggle at first to defeat the Skaven, while the Savage Orc Shaman has free reign with his unpredictable Orc magic. At one point, the Shaman's Fist of Gork spell smashes Martel, the Warrior Priest, into a bloody mess. However, the combination of the magical Healing Hands spell, the blessing of Sigmar, and Martel's Ring of Jade, have him back to full health almost immediately. 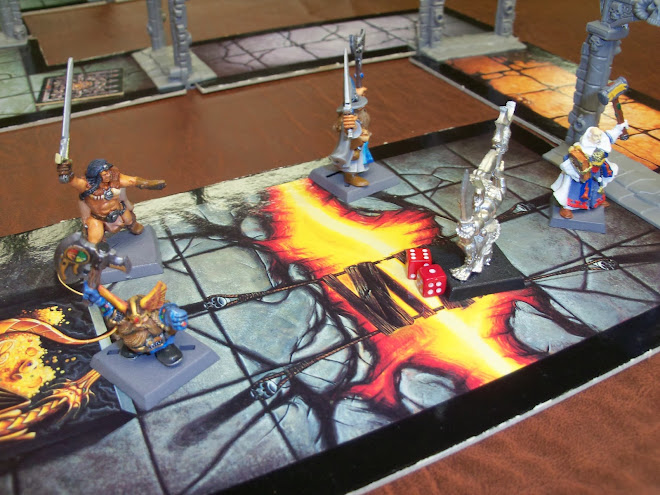 In response, Martel smacks the shaman with his warhammer. In an attempt to get away, the shaman summons the magical Hand of Gork to transport him onto the rickety bridge. 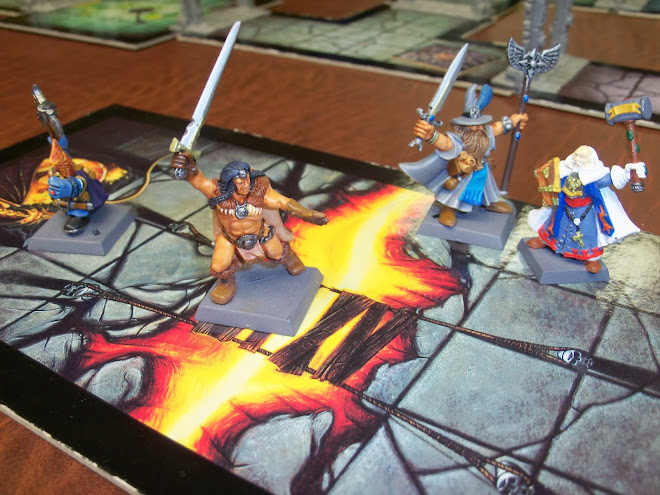 This turns out to be a fatal mistake, as it puts him closer to Kurgan, the Barbarian, who swiftly dispatches the savage Orc shaman in single combat on the swaying bridge. 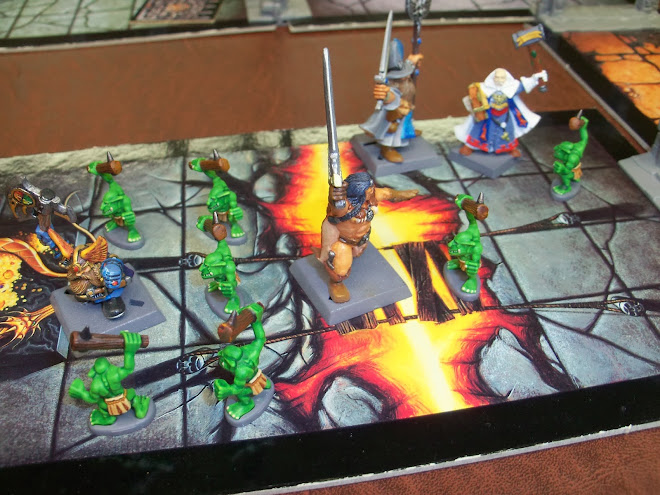 The warriors are ambushed by a group of Snotlings, who mostly focus on the Dwarf who is messing with the statue. The warriors easily deal with the threat. In the aftermath, the adventurers find an ugly, rusty old crown. Unknown to them it is a magical artifact known to greenskins as Bograt's crown. The wizard Löwenbräu is able to recognize its magical properties, which help protect the wearer from harm. (+1 Toughness, and can be worn in addition to a helmet, and by anyone, making it one of the few items that can give the Wizard or Warrior Priest a toughness boost) 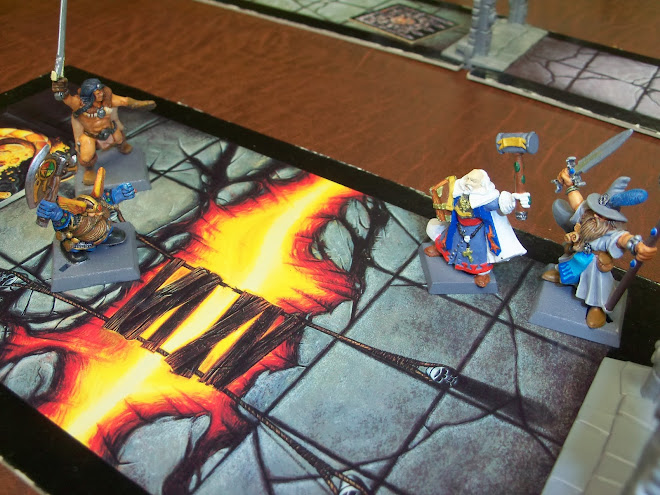 Grimlocke finally manages to remove the ring from the claw of the dragon statue, and toss it into the depths of the firechasm. Flames erupt around the Dwarf as the ring is annihilated by the magical fires deep within the chasm, which then slowly recede and die out.

Upon exiting the dungeon through a hidden tunnel behind the dragon statue, the adventurers meet up with the mysterious stranger who had brought them the message from the Lord of Zhufbar. He commends them on their success, and gives them their rewards, which have been specifically chosen for them from the treasure horde of the Lords of Zhufbar. The (presumably totally illiterate) Barbarian receives a dispel magic scroll. The Dwarf is given a cheap, fake-looking pearl necklace, barely worth the trouble it would take to convince someone to buy it. The Wizard and Priest are given Bretonnian and Elf wines, respectively. (I assume the wizard and priest aren't big drinkers). Perhaps the warriors were not expected to survive, or they had in some way displeased the Lord of Zhufbar, for him to have given them such almost comically inappropriate treasures, and clearly things that no Dwarf treasure horde would ever contain.

After this exchange, the party set off for the nearest city, Kurgan and Grimlocke hoping to find some better armor and equipment. Unfortunately, they immediately happened upon a town stricken by the plague! Grimlocke did manage to buy himself a shield without coming down with anything. Martel picked up some bandages and provisions, but caught the plague, which greatly weakened him (-1 toughness next adventure). After the priest fell ill, the party decided to head out on their next quest, and discovered that both of their mules had been stolen. They hitched their cart up to Kurgan and set out for fortune and glory (and probable death).
Posted by Craig Welter at 8:00 AM