I played out another solo game with the Last Saga beta rules to test out some suggested rules changes. The table setup and scenario were identical to my first Last Saga playtest game, but with the deployment zones swapped between the two sides. This would give me a chance to try out some different rules ideas and see what kind of effect they had. 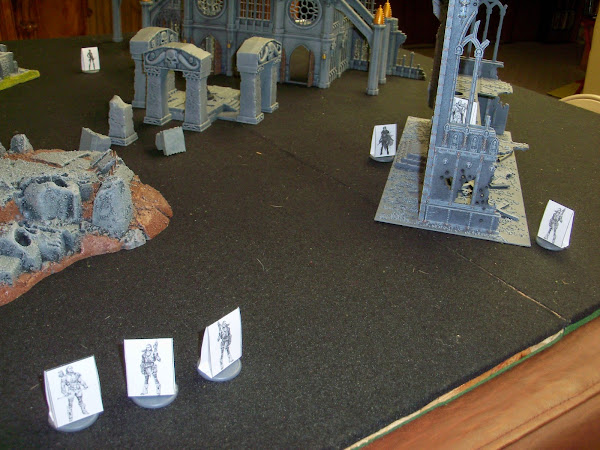 Here is the view from the Raiders of Saanar side of the table. A Contractor and two Corsairs are on the left. There is another Corsair on the right, with a Dog of War deployed in the ruined building with a missile launcher. A Guild Assassin infiltrates ahead of the others, closer to the objective, which is obscured behind a stone column. 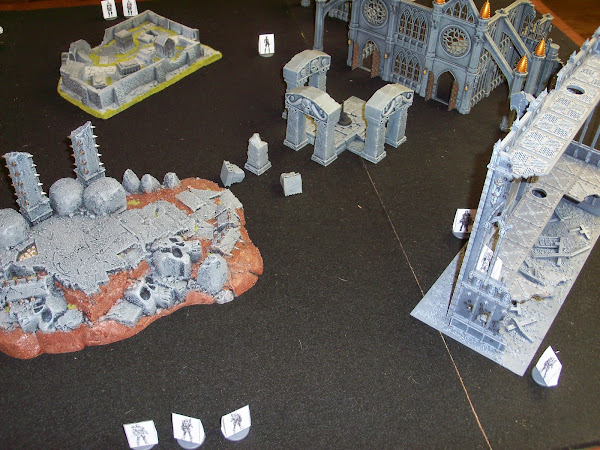 Here most of the table can be seen, with the objective in the very center. 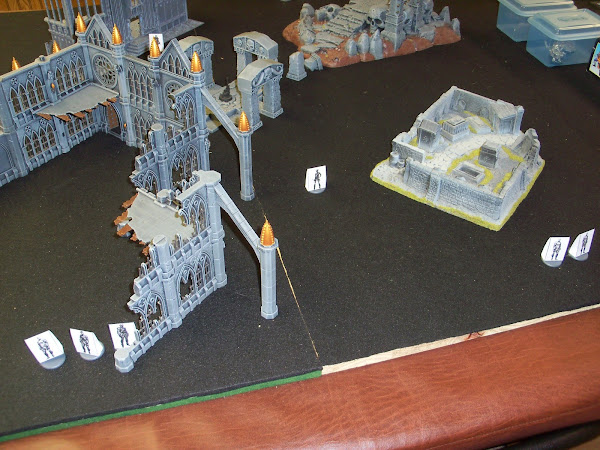 Here is the view from the Council side of the table. To the left is a Tactical Officer, Manticore with Heavy Grenade Launcher, and one Fusilier. To the right behind the graveyard are two Fusiliers. Infiltrating ahead is a Phantom with a Sniper Rifle. 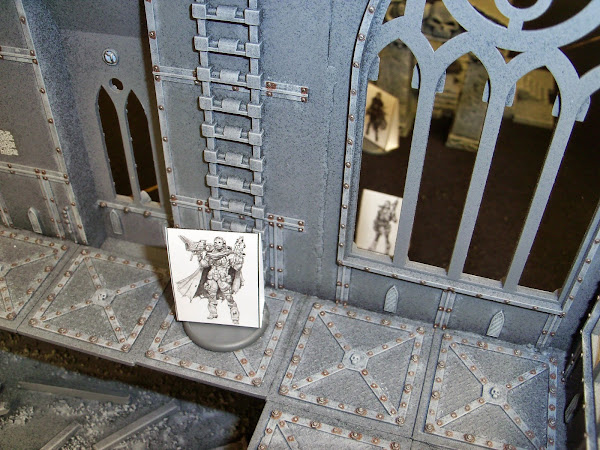 The Raiders had the first turn. Their Dog of War immediately heads for a ladder in the ruined building, intending to get to the very top and give his Missile Launcher the best view of the battlefield. 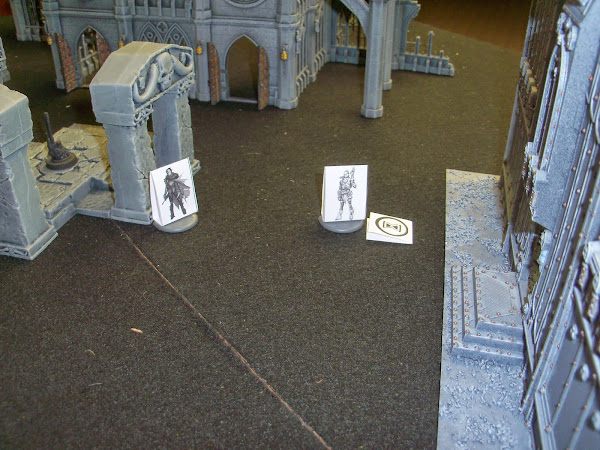 The Guild Assassin moves closer to the objective, taking cover behind a column. The Corsair on the right runs full speed to try to catch up (receiving an Overstrain Marker for performing two actions this turn).

With this game, I experimented with the number of actions per turn, basing it on the number of units in action instead of the points value of the game. I went with one base action per 100 points plus another one for every two units in action. This would mean both sides started with more actions (4 instead of 3) but would lose them as units went out of action. It seemed to work well. 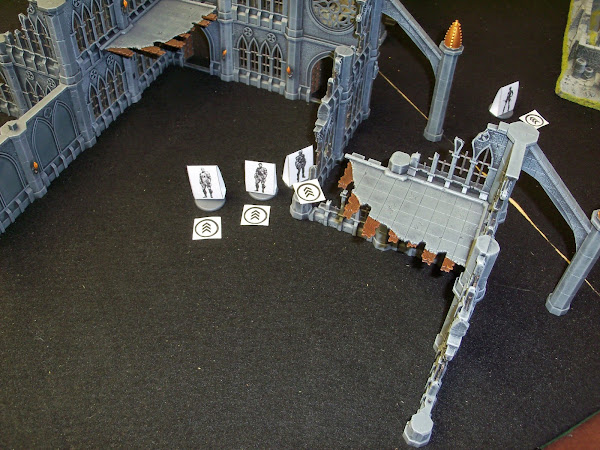 On the Council left, the Tactical Officer, Manticore, and Fusilier run forward through the ruined church toward the objective. The Phantom uses her Suppressive Fire skill to be ready to fire at any enemy to show themselves.

For this game, I reduced the distance of the Race action to 24 cm instead of 30 cm, which seemed too far to me. I also decided I would allow using a Race action in difficult terrain, with the normal half movement penalty, though it never came up. 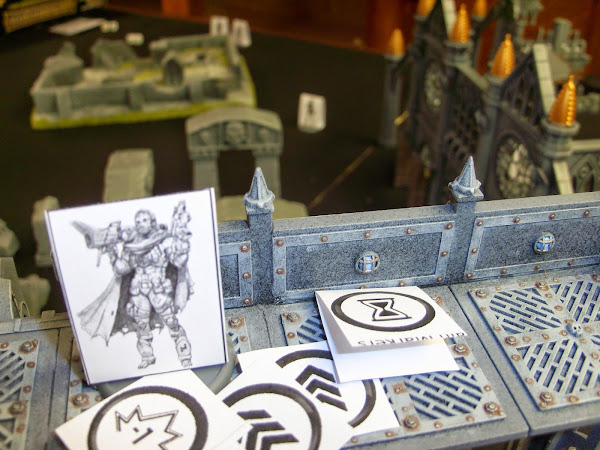 The Saanar Dog of War climbs to the top floor of the ruins (which took two actions, because I considered a ladder as difficult terrain which only allowed half movement rate). He is immediately fired on by the Phantom! Due to the protection of the building he is unharmed, but the unexpected shot does result in a Pressure Marker. 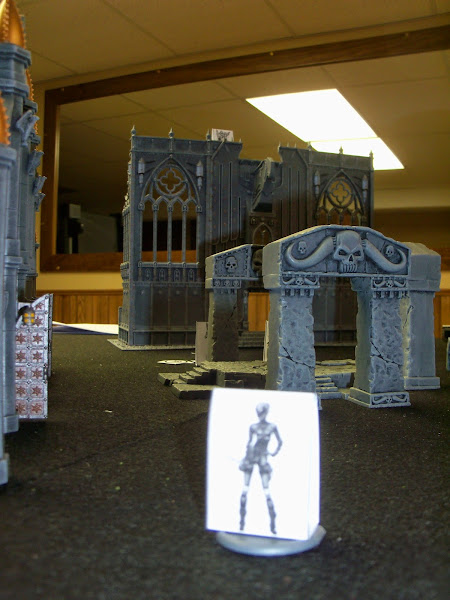 As you can see, it was a pretty difficult shot to make. For this game, I made cover a little better by saying that hard cover that was more than half the height of the model gave a -3 to power rolls made against the unit. I was also using this rule idea for height advantage: "When shooting, if attacker is 10 cm or more above defender, reduce the cover penalty by one. If attacker is 10 cm or more below defender, increase the cover penalty by one." So the penalty here was -4, but even so I just missed causing damage with a roll of 7. Granted a different unit would have more trouble taking out such a difficult target, but I think it makes sense that you should use snipers or grenades on enemies in such a good defensive position. So I liked those changes to the cover rules. 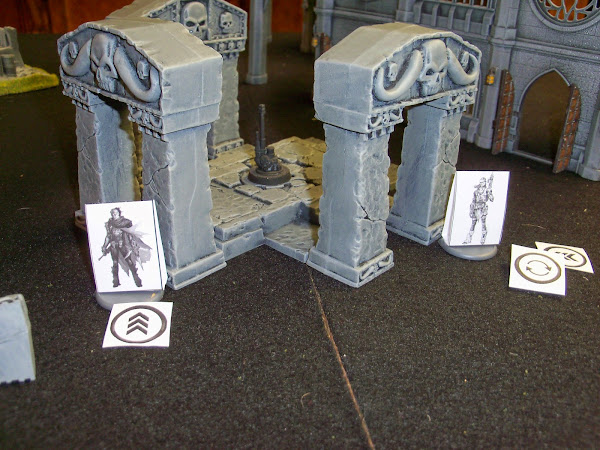 The Corsair on the right moves up even closer to the objective, behind another pillar. Not quite ready to make his move on the objective yet, the Guild Assassin repositions himself behind a different column, keeping his distance from the Corsair. This would eliminate the possibility of both of them being taken out by a single lucky grenade throw. 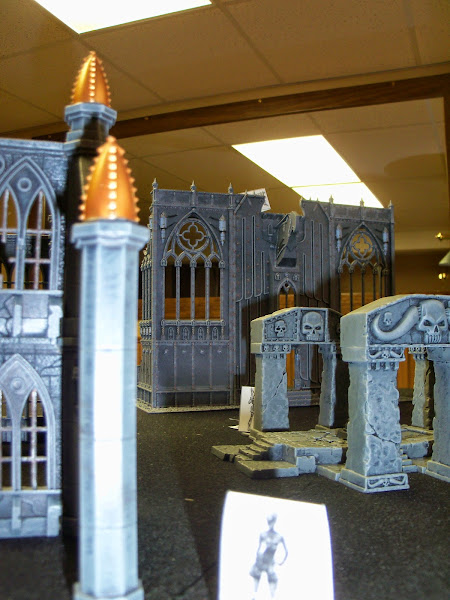 The Phantom with the Sniper Rifle carefully takes aim at the Dog of War, who she just missed with her Suppressive Fire shot. This time her aim is true, and she takes the Dog of War out of action. A lucky break, since he could have done a lot of damage from up there with his missile launcher. 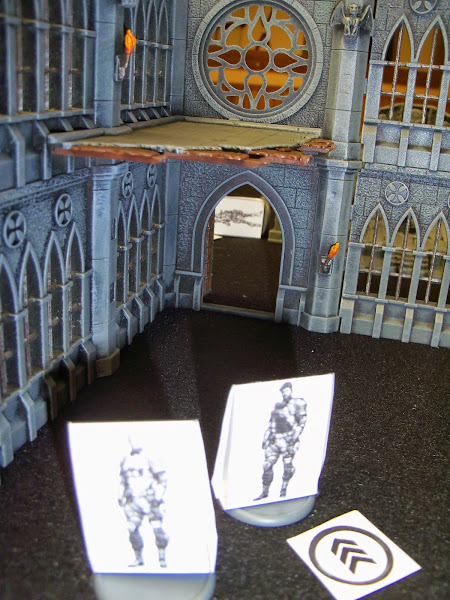 In the ruined church, the Tactical Officer uses his command ability to allow him and the Fusilier to both move up and fire on the nearby Corsair, causing him a light wound followed by a heavy wound. 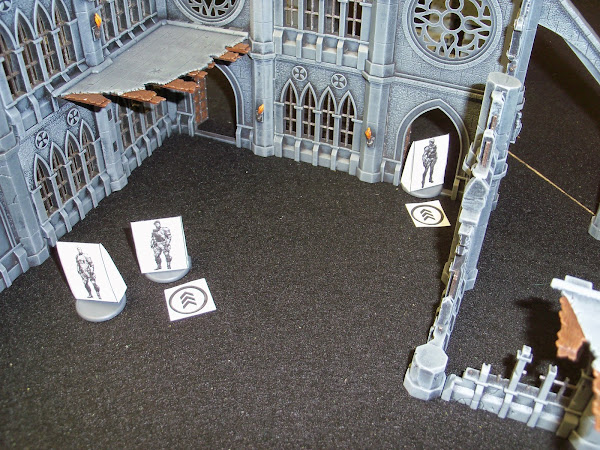 The Manticore with the Heavy Grenade Launcher takes position in a doorway to cover the area around the objective. 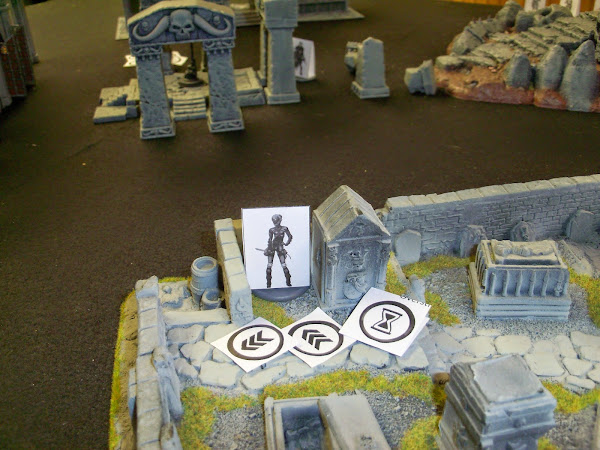 Now that she had opened fire and lost the benefit of her Cloaking System, the Phamtom races to find some cover behind the cemetery walls. 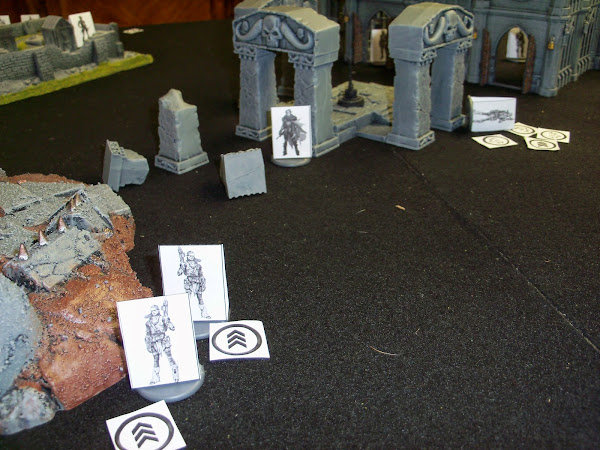 The wounded Corsair tries to Mend his wounds, but they are too severe. The other two Corsairs advance toward the objective. At this point, with one unit out of action, the Saanar were down to three actions per turn due to the rules I was testing for basing actions on number of units. 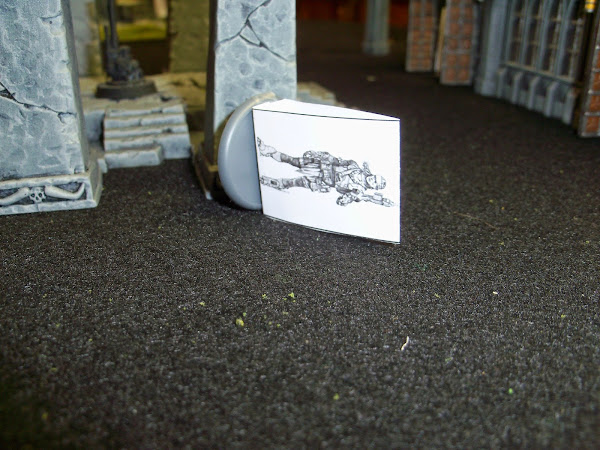 The wounded Corsair succumbs to his wounds, and is out of action. 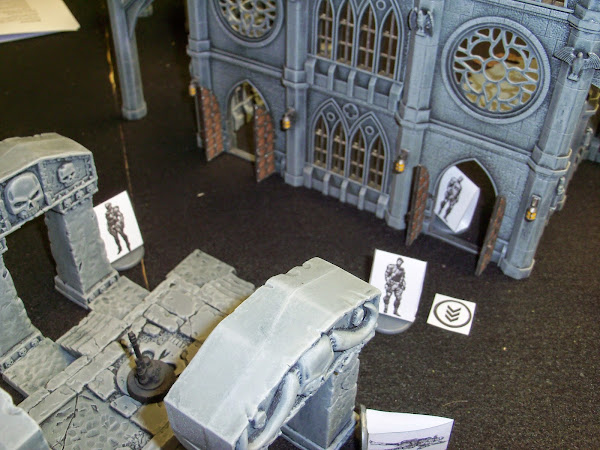 The Tactical Officer, Fusilier, and Manticore all advance cautiously, taking up positions closer to the objective. Things are not looking good for the Raiders of Saanar. 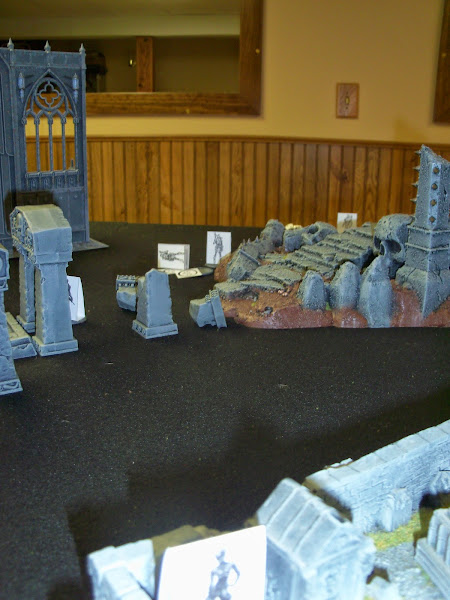 The Phantom fires on the closest Corsair. The shot only causes a minor wound, but will prevent the Corsair from continuing his advance toward the objective. Another setback for the Raiders, and their chances of retrieving the objective are looking worse and worse. 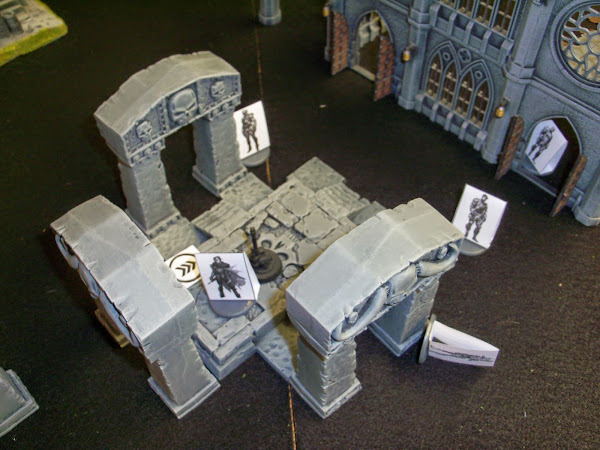 In desperation, the Guild Assassin moves up to grab the objective, even though there are several enemies waiting nearby. 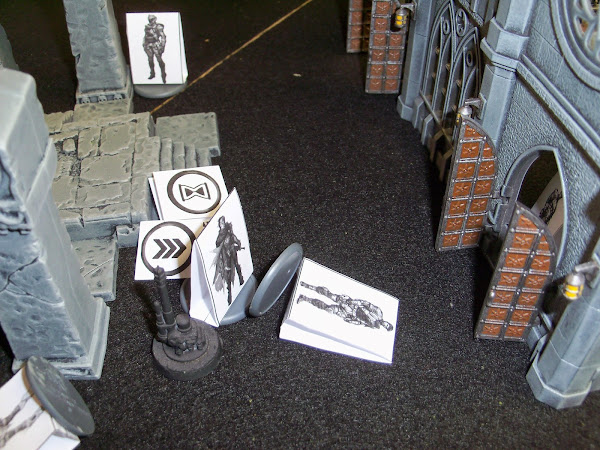 In a stunning move, the Guild Assassin charges at the Tactical Officer, hoping to simply wound the Officer and use him as a human shield to avoid being immediately shot down by the other Council forces. Unfortunately, his killer instincts cannot be held in check. After a perfectly landed shot from the Assassin, the Tactical Officer is dead before he hits the ground. 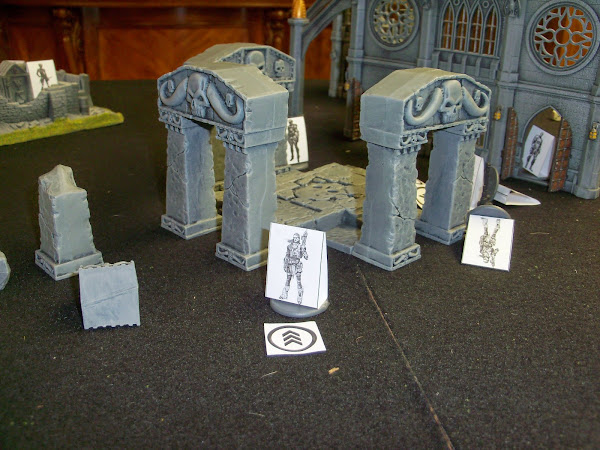 The last Corsair standing Races forward, hoping to arrive in time to help the Guild Assassin extract the objective. 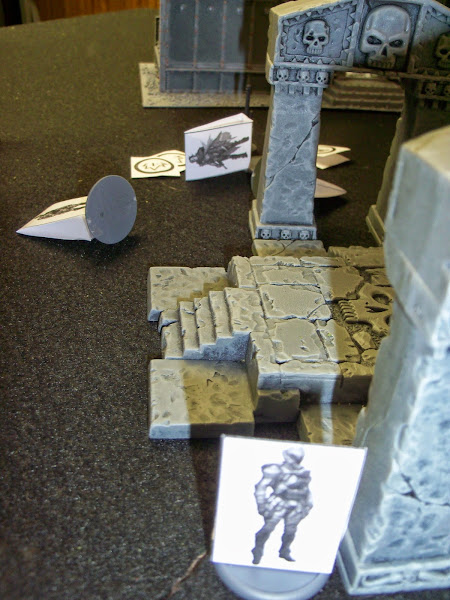 Too close for his Heavy Grenade Launcher, the Manticore pulls out his Heavy Pistol and fires two shots at the Guild Assassin, causing a Light Wound and a Heavy Wound. Because of his Evasive Maneuvers ability, the Guild Assassin is able to move (in this case crawl, I guess) a short distance for each shot taken at him. 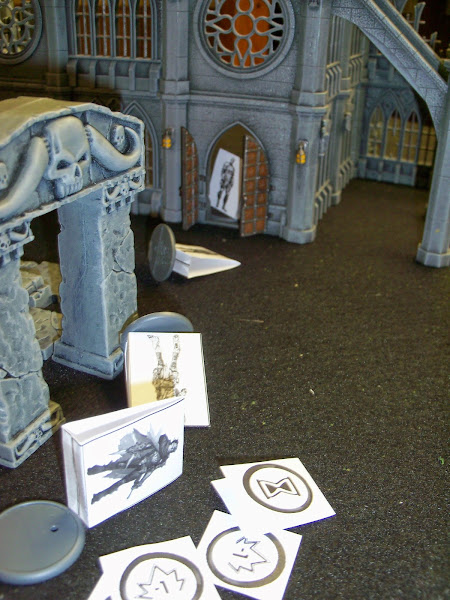 The Fusilier opens fire on the Guild Assassin as well, causing two more sounds. The Assassin crawls over the corpse of the dead Corsair towards his nearest comrade. 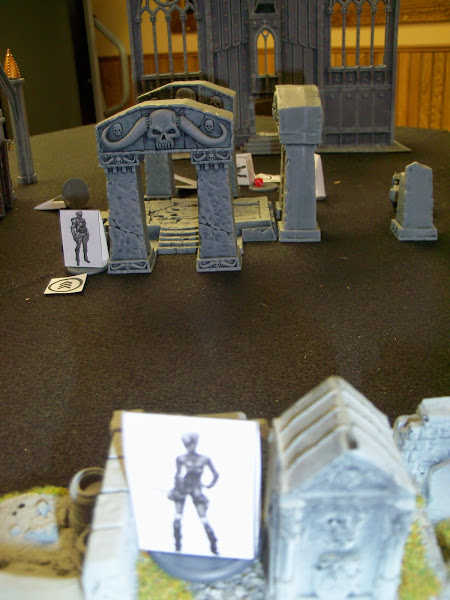 The Phantom also takes a shot at the Assassin as he crawls into view, wounding the poor, hapless Saanar yet again. But it does enable him to crawl just far enough to reach the last Corsair still on his feet, and hand off the objective. What a heroic effort the Assassin made, being wounded five separate times and still dragging himself far enough to make sure the objective could be handed off to his ally. No doubt his sacrifice will be honored and celebrated by his guild (since it will no doubt earn them more business in the future). 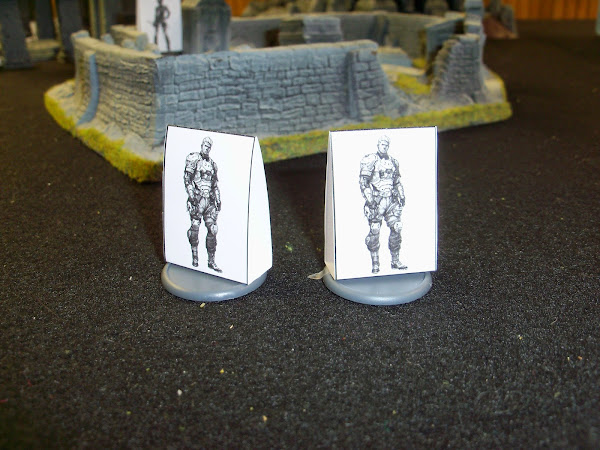 These two Fusiliers stand around wondering what all the commotion is about. They haven't received any orders, so they've just been standing here. 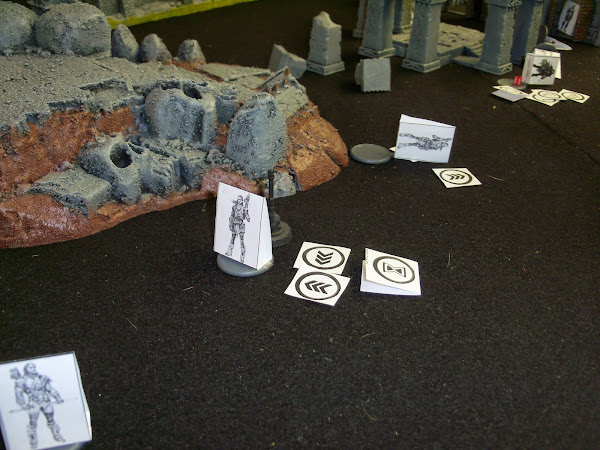 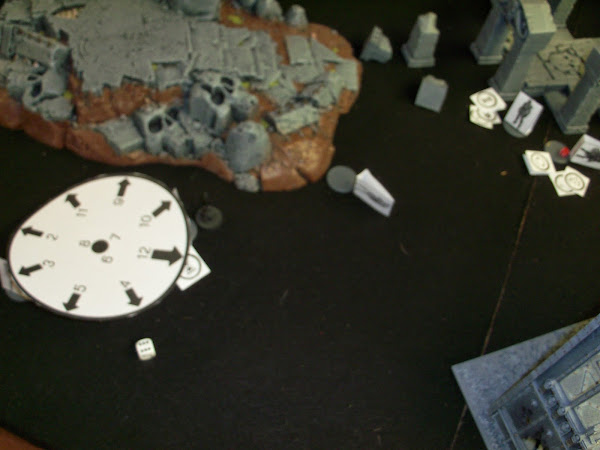 The Manticore Races up and then fires with his Heavy Grenade Launcher. I was using some different rules for grenade scatter than the original Beta rules, but they've already updated the scatter rules to something better, so I won't go into what I did. In any case, the Corsair holding the objective is wounded in the explosion, but the Contractor dives out of the way and remains unharmed. 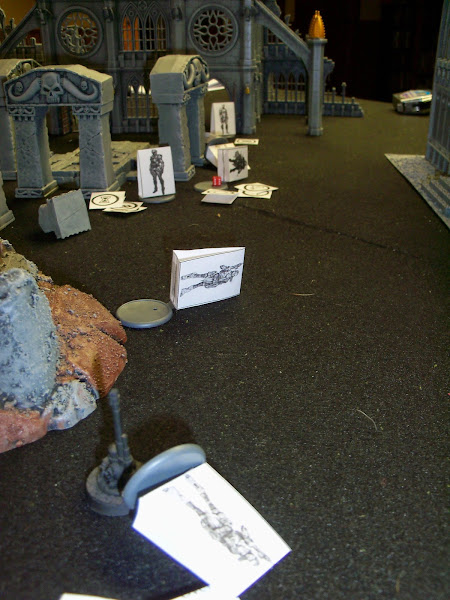 Way off in the distance you can see the Fusilier take careful aim at the Corsair with the objective before delivering a fatal shot. The Raiders of Saanar are down to just a heavily wounded Guild Assassin, lightly wounded Corsair, and the unwounded Contractor. 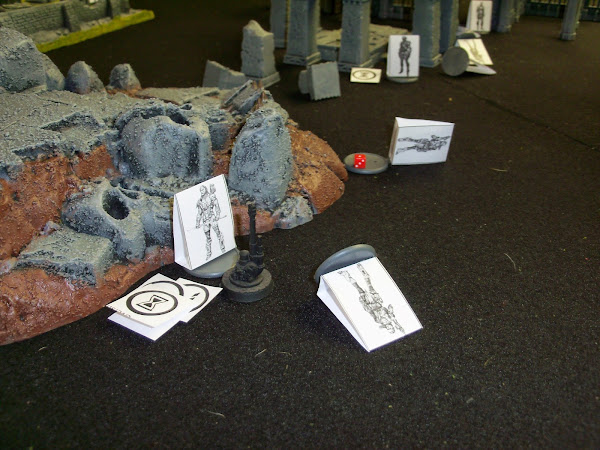 The Contractor grabs the objective, can't quite escape with it yet. So he moves toward the rocks to take cover as best he can. 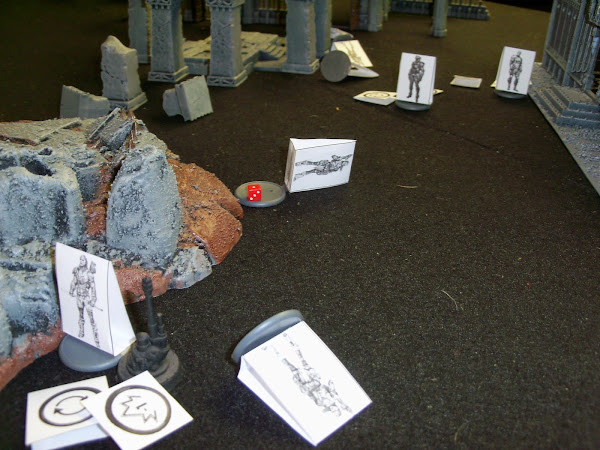 The Manticore and Fusilier manage to get shots off at the Contractor, but the rocks keep him safe from harm. After they take their shots, he is able to sprint to safety carrying the objective, securing victory for the Raiders of Saanar. 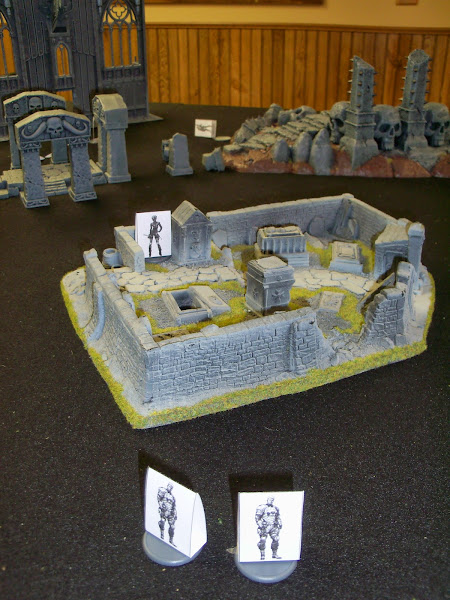 Meanwhile, these poor Fusiliers are left to wonder how things turned out. The Raiders of Saanar suffered significant casualties, with three dead, and two wounded and presumably captured. Only the Contractor got away, but he did so with the objective. The Council force only lost their Tactical Officer, but would have to return without the objective of their mission and admit defeat.
Posted by Craig Welter at 5:12 PM