Last Saga is a skirmish wargame based on 32mm miniatures. Different factions fight against each other in a science-fiction universe. Games portray confrontations between two small groups of units, filled with action and where tactics are key to victory. In a Last Saga game each player uses between 6 and 15 miniatures.

That is the description of the game Last Saga taken from their Kickstarter project page. The rules are in development, and the current "Beta" version can be downloaded from a link on the aforementioned Kickstarter page. The purpose of the Kickstarter project is to raise money to create a range of metal miniatures for use in the game. The initial goal was to raise enough money for two initial faction starter packs, but they have exceeded that goal by quite a bit, and are now offering starter packs for 4 different factions, along with additional add on units for all of them. Only a few models have been sculpted already, but they have some really nice concept artwork for many more of them.

I had a read through the rules, and thought they had some really interesting mechanics behind them. I decided to do a quick solo playtest of the Beta rules to see how they play out. The kickstarter page links to a "Print and Play" list of downloadable files with printable unit cards, standups, tokens, and templates for playing the game. I created two 100 point factions using the units available in the Council and Raiders of Saanar starter packs (though I may not have used the same weapons that come with the starter packs, since I didn't check that). I decided to play the "Probe Lost" scenario, which has an item placed in the center of the table that both sides are trying to retrieve and return to their deployment zone. 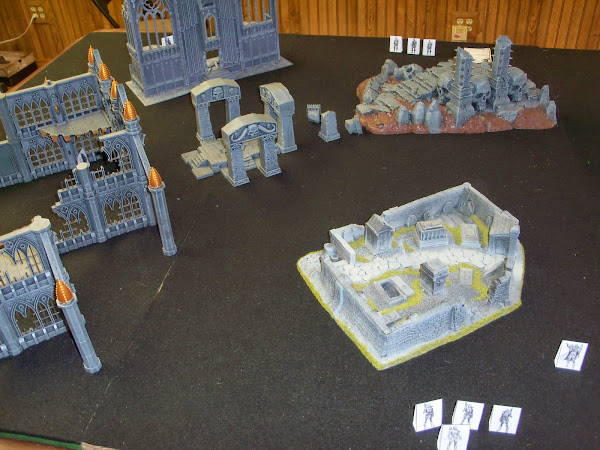 Here you can see the whole table setup. The probe is in the very center of the table, behind a column. On the near side are the Raiders of Saanar, and on the far side are the Council forces. 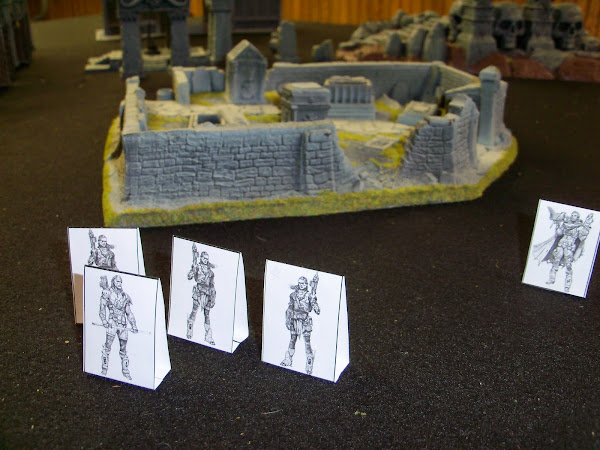 Here we see the three Corsairs, one with a machine gun, along with their Contractor (an officer) leading from behind. Slightly off to the right is the Dog of War with a missile launcher. That accounts for five of the six Saanar. Where could the sixth be? 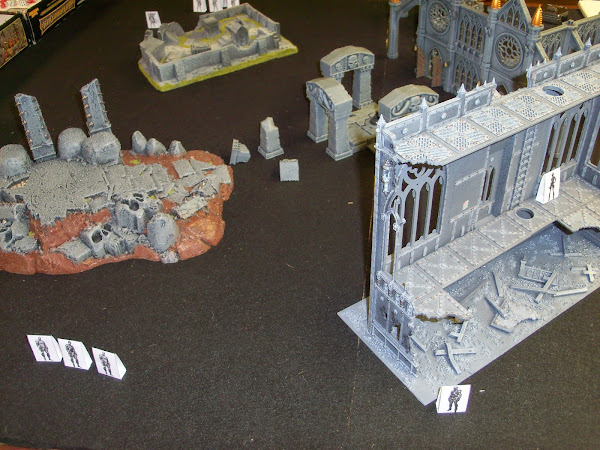 From the other side of the battlefield, we see the Council deployment. On the left is the Tactical Officer and what should be three Fusiliers (I forgot to set one up before I took the picture), one with a machine gun. At the base of the ruined building is a heavily armored Manticore with a machine gun. On the second floor of the building, looking out the window, is a Phantom with a sniper rifle. 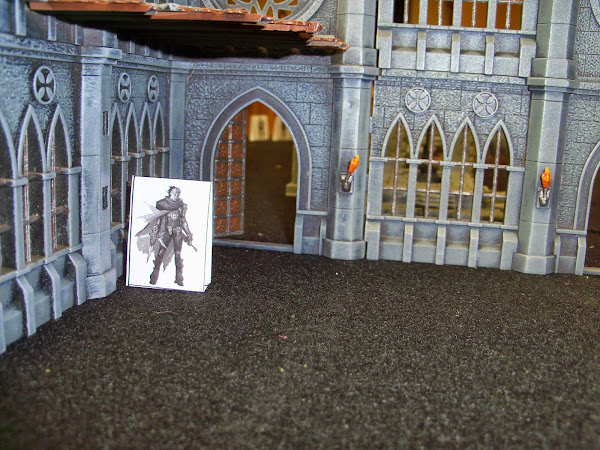 This sneaky Saanar Guild Assassin has infiltrated far ahead of his companions, and close to the probe. 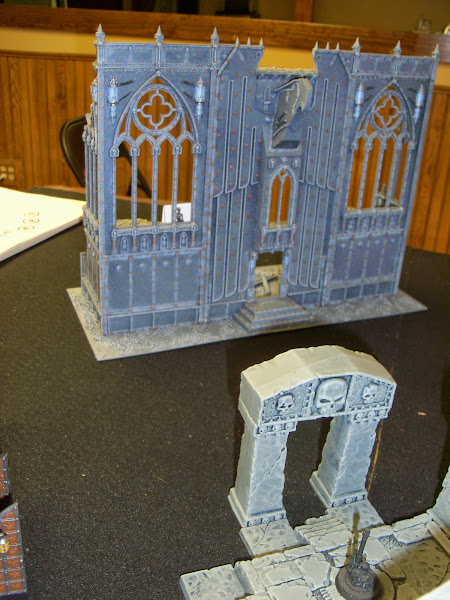 However, the Phantom has it covered pretty well with her sniper rifle. That should deter that sneaky Saanar assassin. 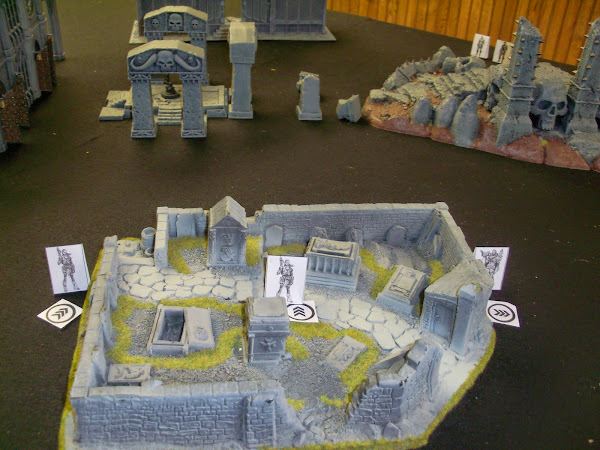 The number of actions a player is allowed in a turn is based on the size of the game. In this case, a small 100 point game only allows three actions per turn, so which models to activate is an important decision. In this case, three Saanar advance in and around the graveyard: the Dog of War to the right, the Corsair with the machine gun through the middle, and another Corsair to the left. 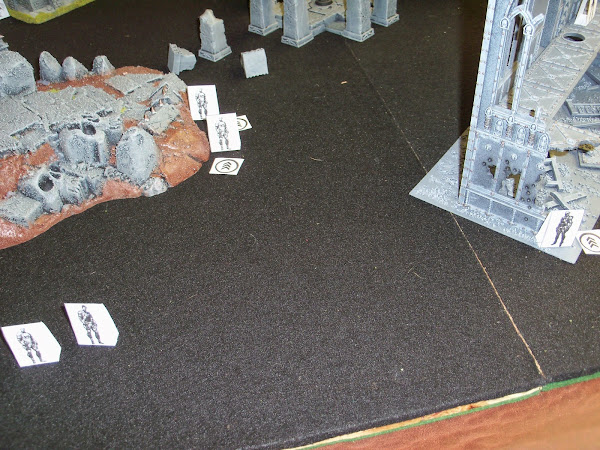 On the Council side, two Fusiliers, one with the machine gun, advance toward the objective, keeping close to the cover of the ruins. To their right, the Manticore attempts to climb up to the second story of the ruined building to get a better view, but fails his agility test. 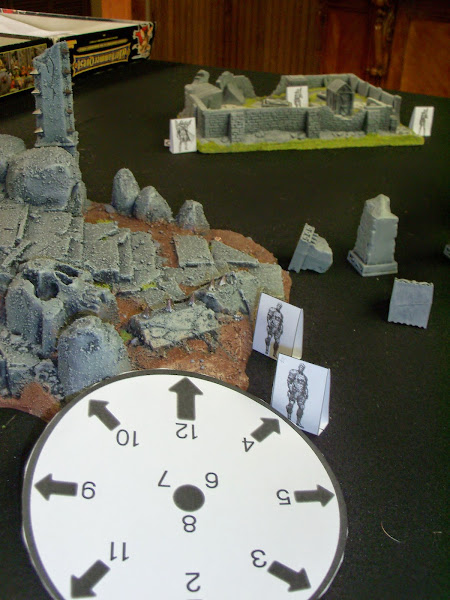 The Dog of War catches sight of the nearest Fusilier and takes a shot with his missile launcher! Luckily for these two, the shot scatters, and the back Fusilier passes his agility test to avoid the explosion. It should be noted that the rules don't currently mention scatter for missile launchers, only for thrown grenades. But I thought it made sense, and it sounds like it will probably be added to the next version of the rules. 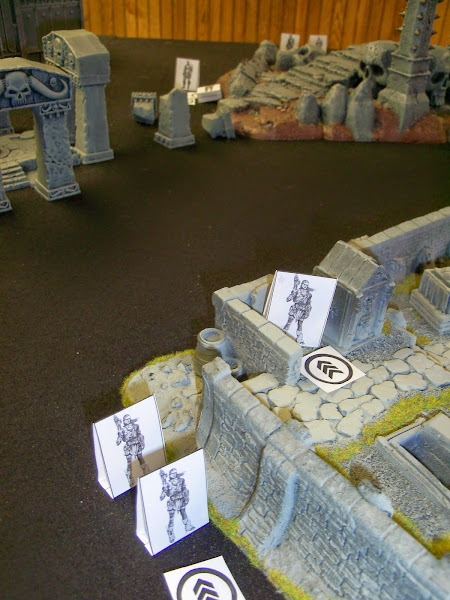 Meanwhile, another Corsair moves up to take position behind his comrade, and the Corsair with the machine gun takes up a nice firing position behind the graveyard wall and opens fire on the nearest Fusilier, causing him a severe wound. 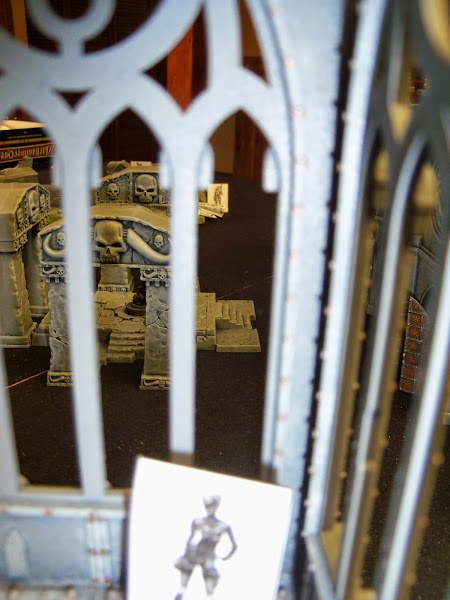 But the Corsairs have exposed themselves, and the Council Phantom drops one of them with a sniper round, though it only causes a minor wound. 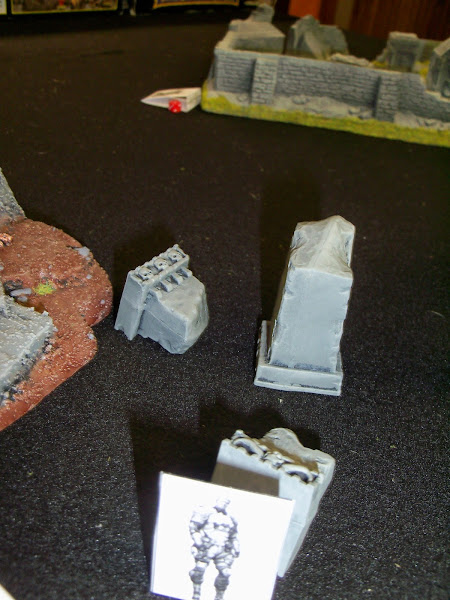 The Fusilier with the machine gun moves up behind some cover (which is essential in this game) and opens fire on the Dog of War, killing him in a hail of lead. 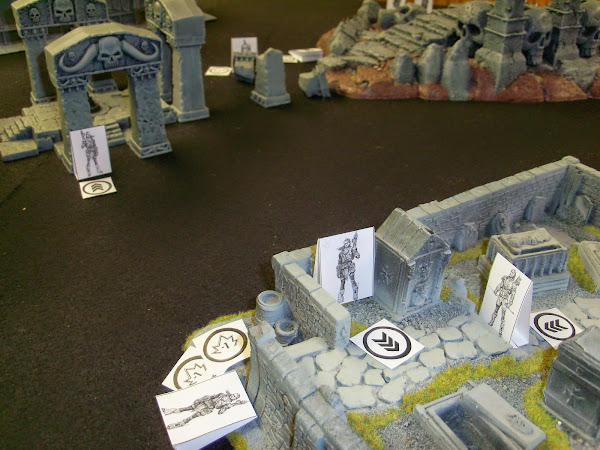 One Saanar is already dead, and another is down wounded. The Contractor moves up into the graveyard, while the Corsair with the machine gun fires at his Fusilier counterpart. However, the cover provided by the broken columns protects the Fusilier, and he only receives a "Pressure Marker", which will reduce his effectiveness next turn. The remaining Corsair on the left takes the opportunity to sprint toward the objective, but behind the safety of a column. 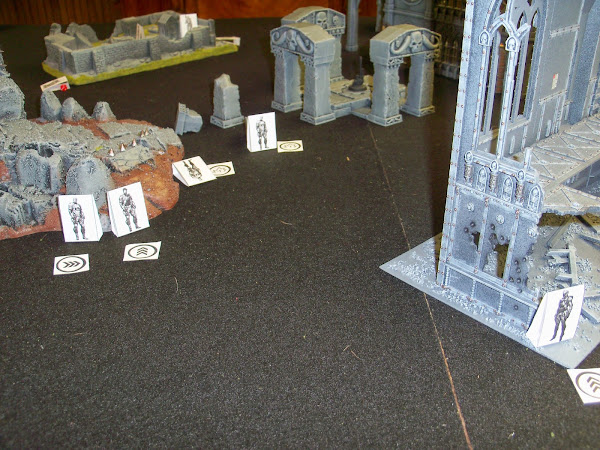 The Manticore again attempts to climb the ruined building, and again fails. The Tactical Officer and remaining Fusilier advance closer to the probe, but make sure to stay out of sight behind the ruins. 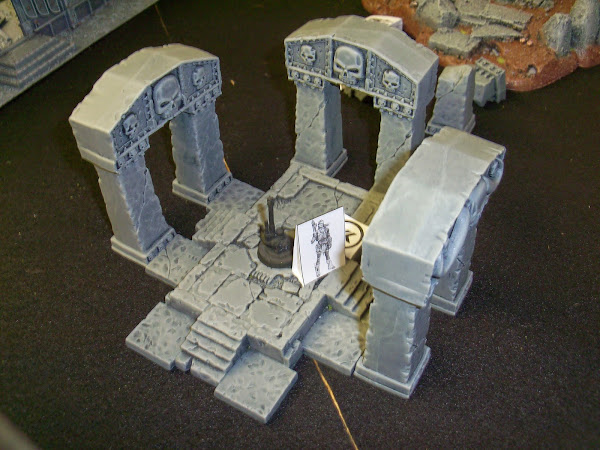 Seizing his opportunity, the forward Corsair moves up and grabs the probe. 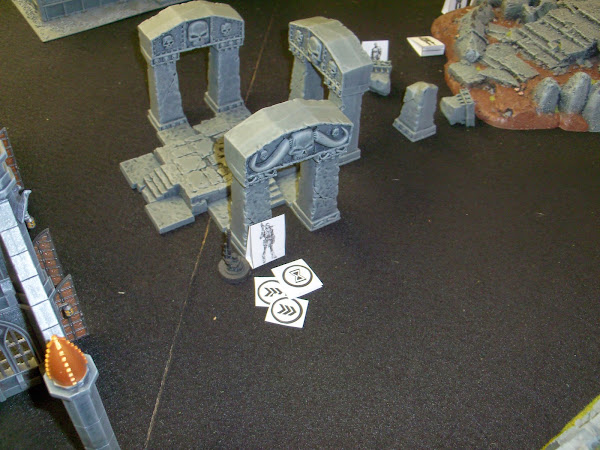 He then quickly returns to the safety of his position behind the stone column. Models in Last Saga can perform two actions in a turn, but they then receive an "Overstrain" marker, and will be limited to a single action next turn. 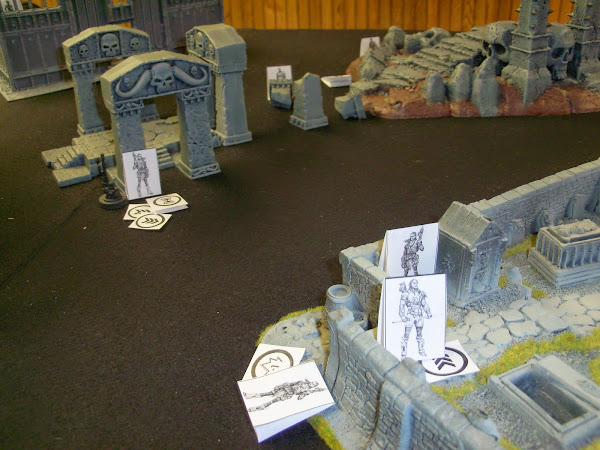 The Contractor moves up again and takes a shot at the Fusilier with the machine gun, but due to the long range and the cover, it proves to be ineffective. 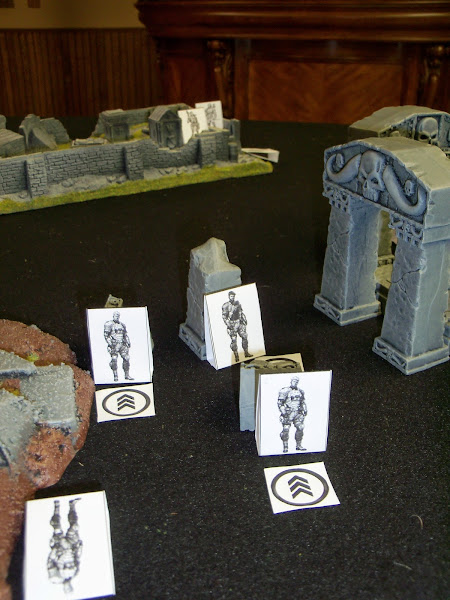 The Fusilier with the machine gun fires and misses, while the Tactical Officer and remaining Fusilier move up and take cover behind the other columns. 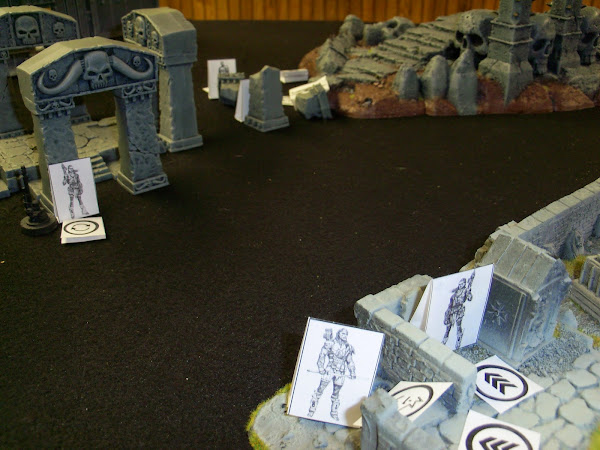 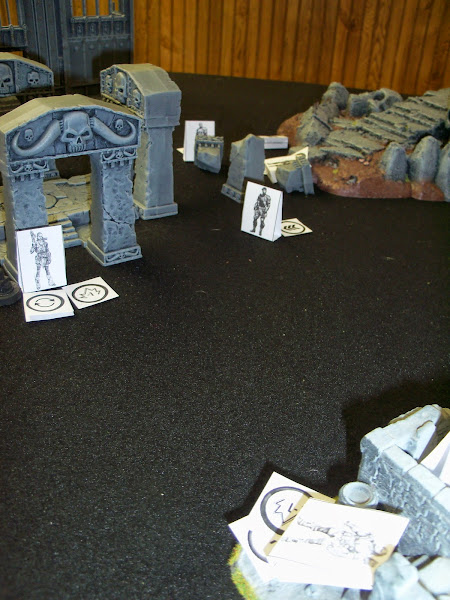 With the situation looking more desperate, the Tactical Officer fires on the Corsair with the probe, only causing him to take a Pressure Counter. To cover his officer, the Fusilier with the machine gun fires on the Saanar Contractor, dropping him with a severe wound. 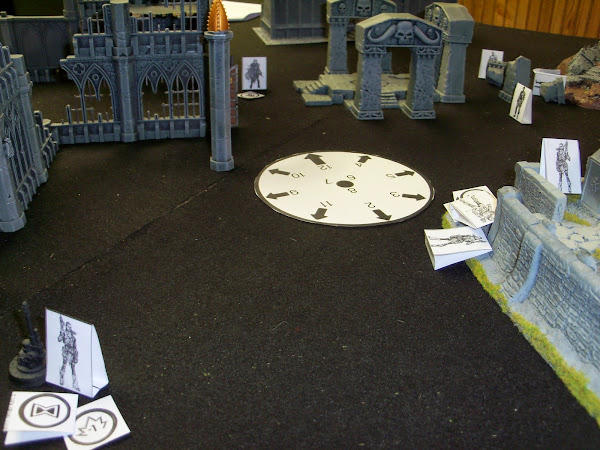 The Corsair with the probe sprints at full speed back towards his deployment zone. The Saanar Guild Assassin finally reveals himself, throwing a smoke grenade to cover the Corsairs escape. His throw is perfectly on target, making it impossible for any of the Council units to get a shot at the Corsair before he escapes with the probe.

A victory for the Raiders of Saanar! This was a fun and exciting game. I have more thoughts on the rules, but I think I'll save those for another post. If you want to read them yourself, or give them a try, you can download them from the link on the Last Saga Kickstarter project page. I think they have a lot of promise, and I'm looking forward to seeing how the rules and miniatures turn out.
Posted by Craig Welter at 2:44 PM