The city of Praag, which lies close to the border of the Chaos Wastes, has been struck with the dreaded Nurgle’s Rot, a disease spread by the foul Power of pestilence and decay. The death toll is mounting, but the physicians in the city are powerless unless they can find a cure. There appears to be only one hope.

In the ancient myths and songs of Kislev, a fountain is described that has waters so pure and so cold that any creature harbouring any evil nature is frozen to death as soon as it touches the waters. The doctors of Praag believe that this may provide a cure for the disease.

The fountain is said to lie in the mountains north of the High Pass. The Warriors must seek it out and return with some of the precious liquid. They are given a special container in which to carry the water.

This is a bit strange, since in their last adventure the Barbarian had contracted Nurgle's Rot, and had just paid 2000 gold to have it cured. So clearly a cure for Nurgle's Rot has already been found. So we'll say that there was only one dose of the cure left in the city the warriors were in (which apparently was Praag). In order to convince they physician to sell it to him, the barbarian had to promise to undertake the perilous journey to obtain more of the primary ingredient for the cure, so that the city could replenish its stock.

Not having much choice, Kurgan agreed to the deal. Martel, the warrior priest, was given the special container in which to carry the precious water back to civilization. He was deemed the purest and least evil of the warriors. With that settled, the party set out on their adventure. 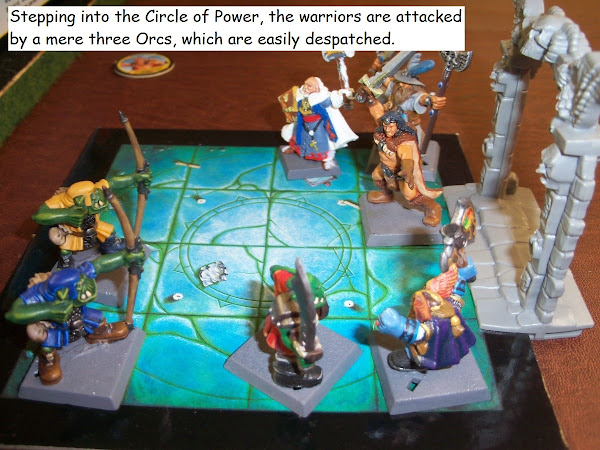 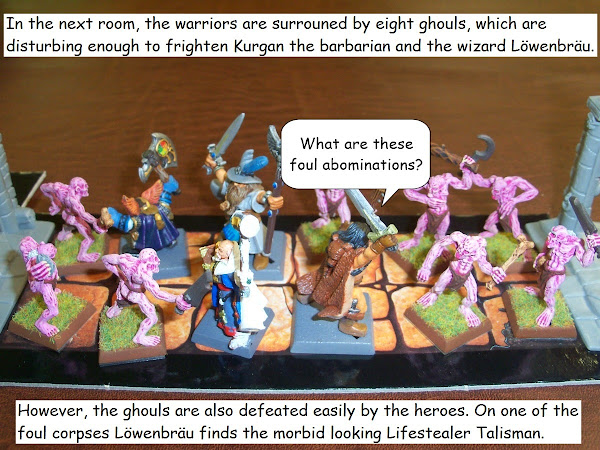 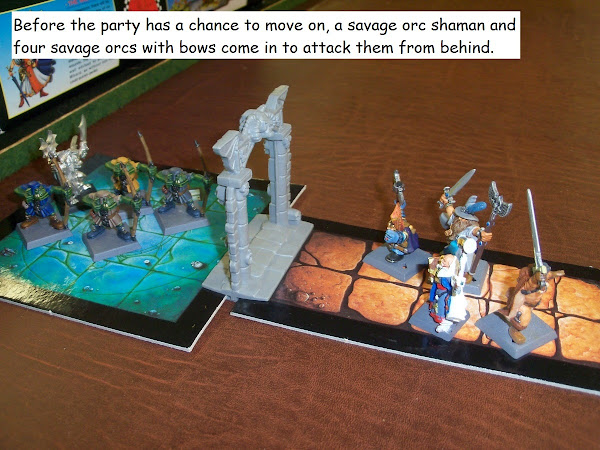 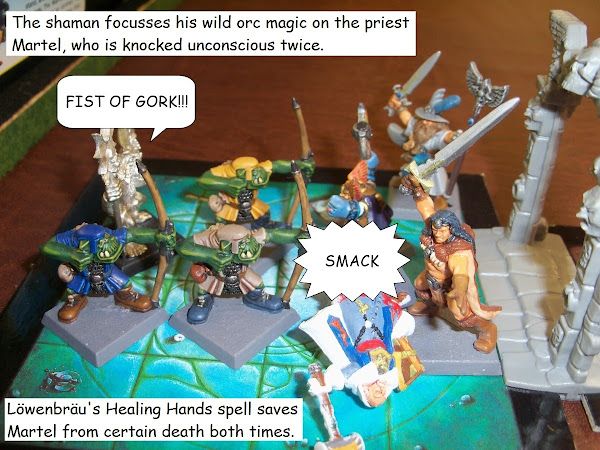 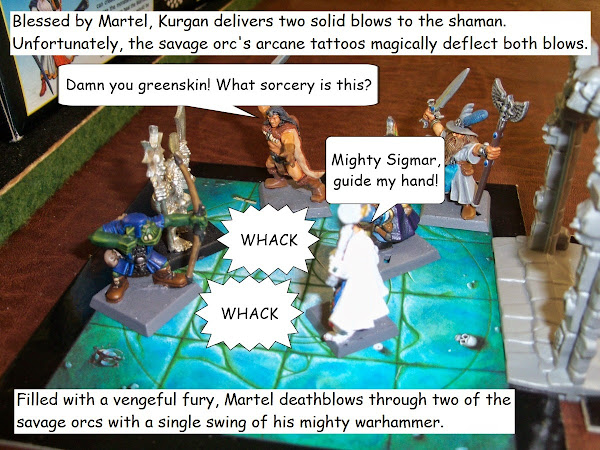 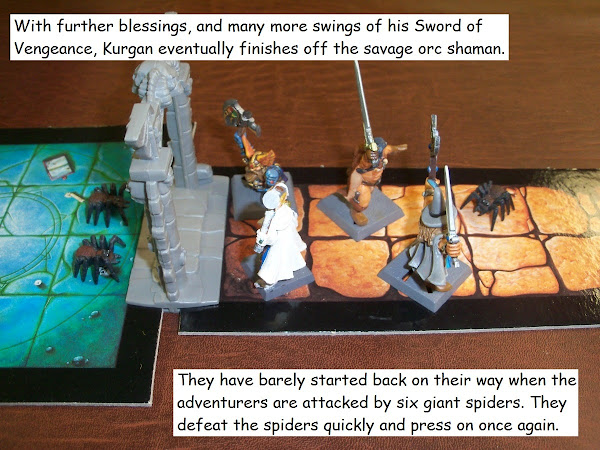 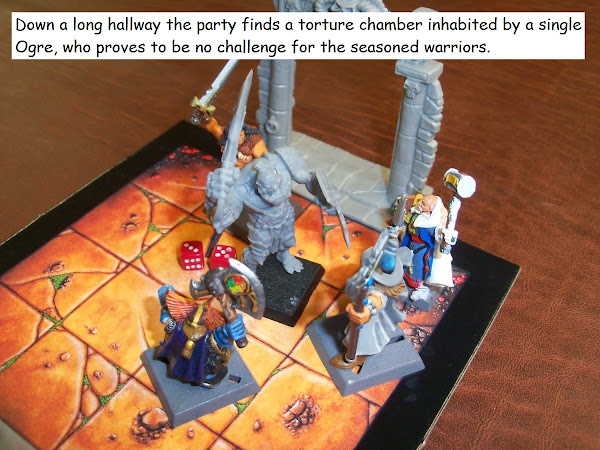 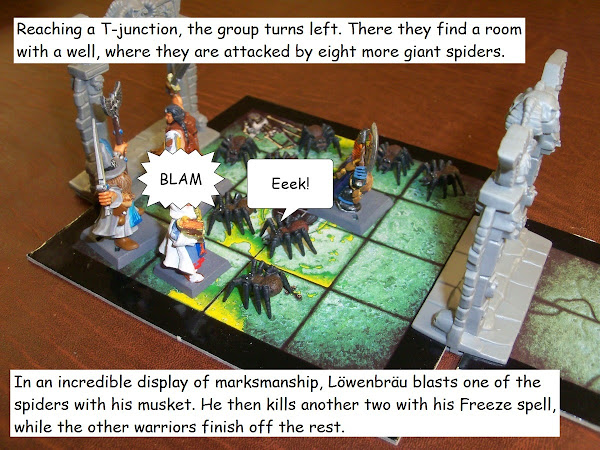 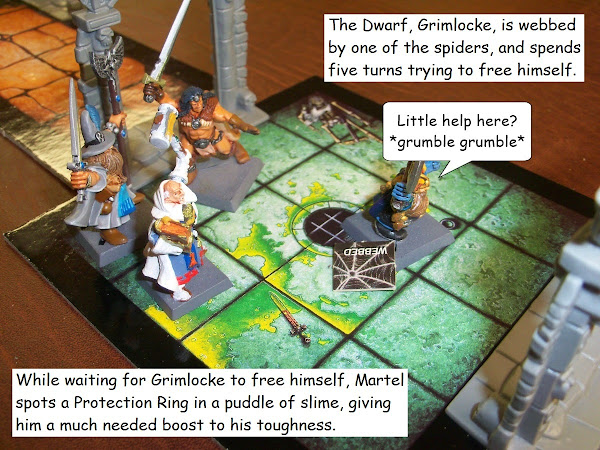 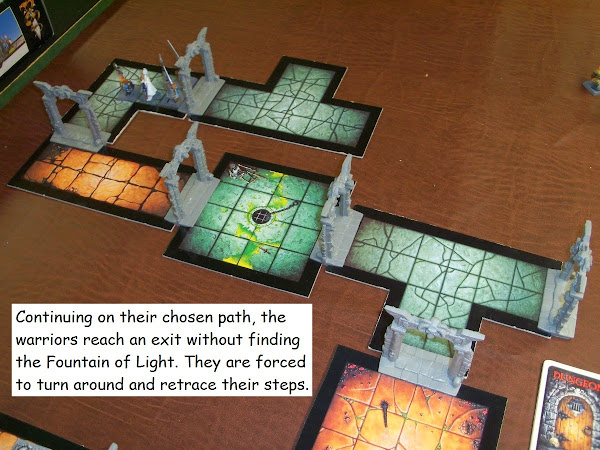 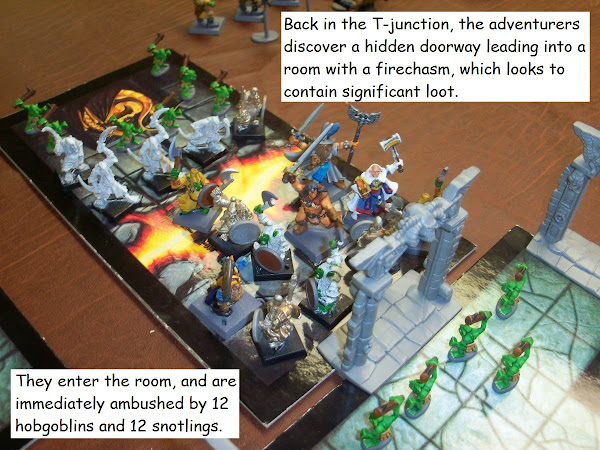 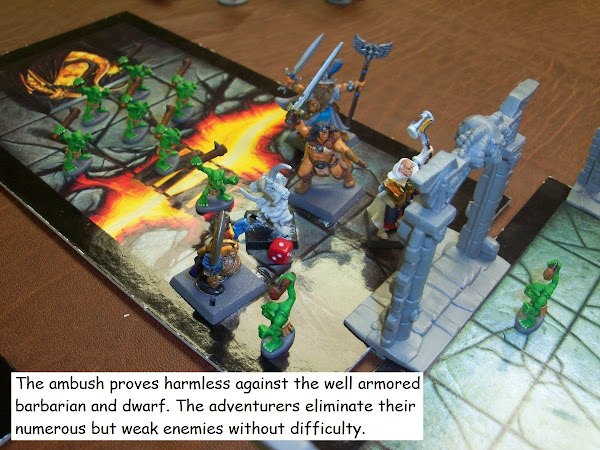 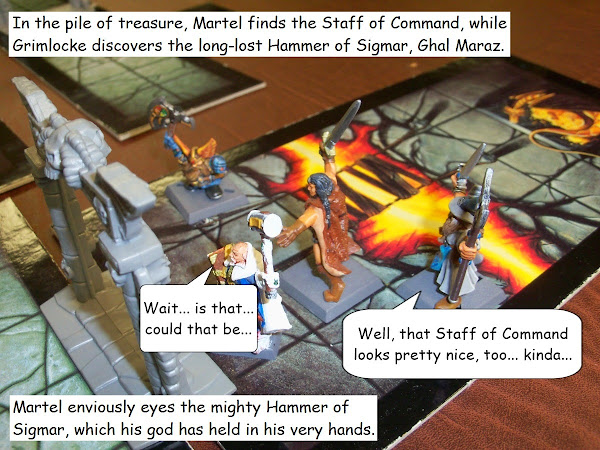 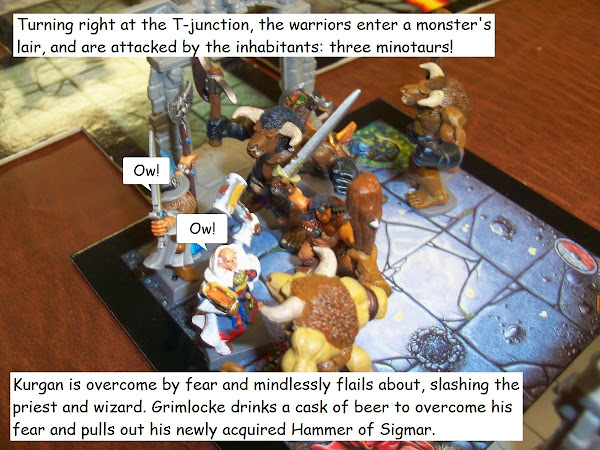 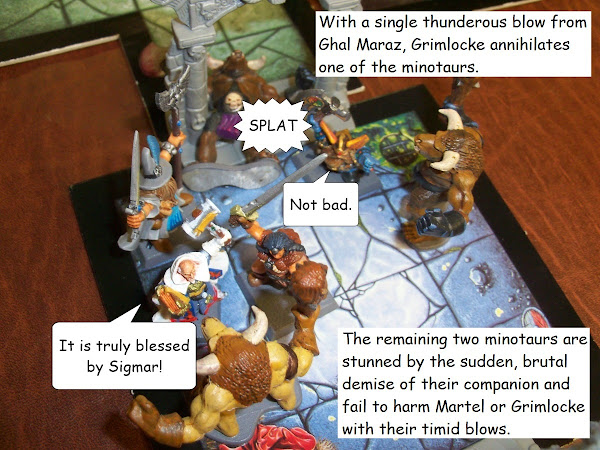 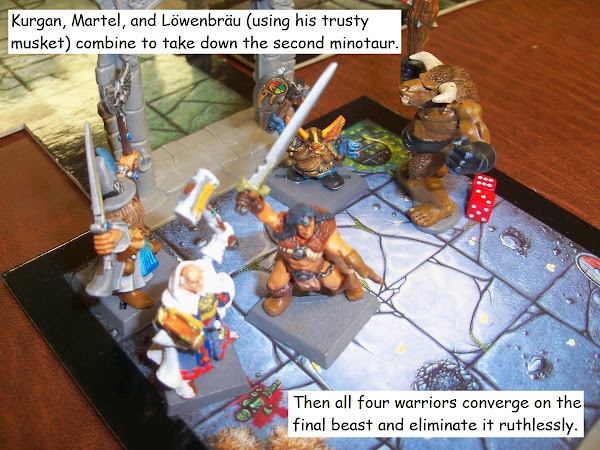 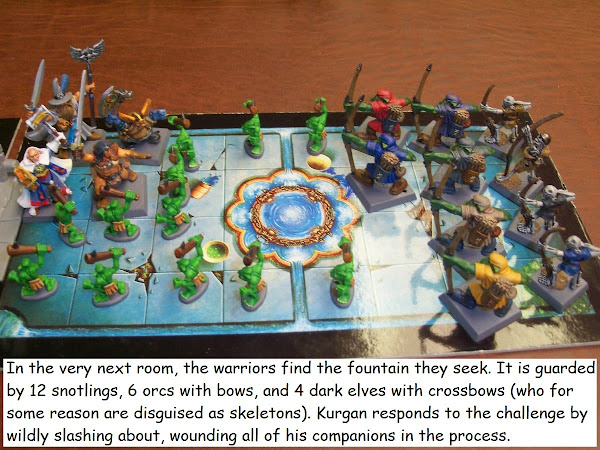 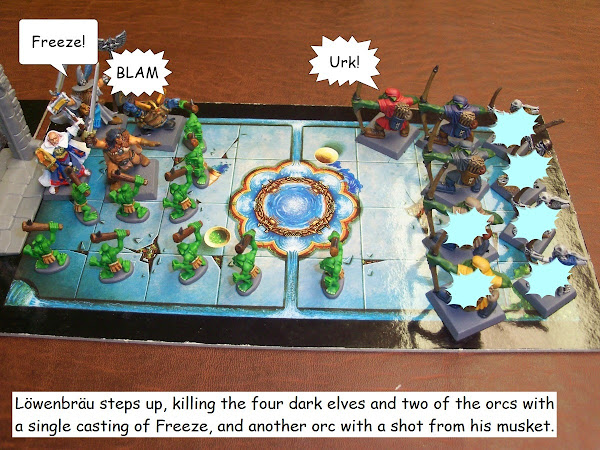 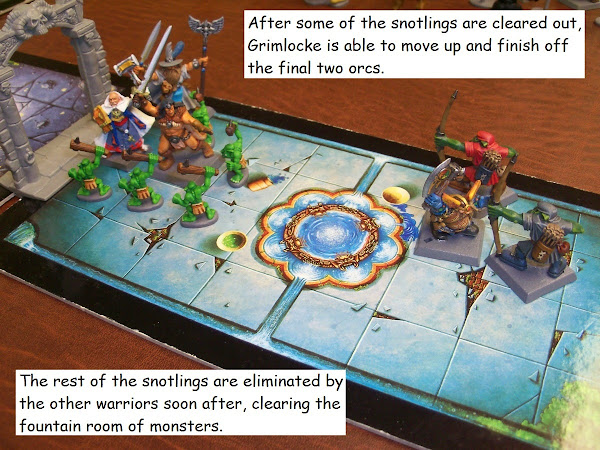 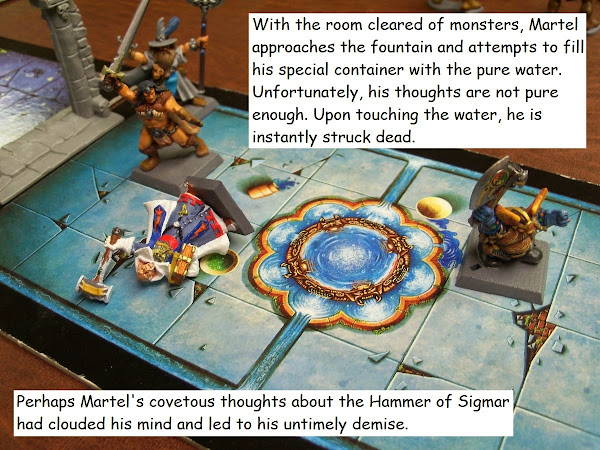 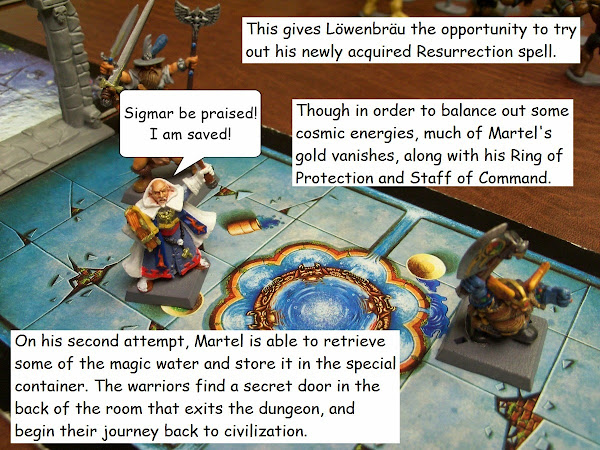 Instead of going all the way back to Praag, the warriors decide to just head for the nearest town, and forward the magic water on through a courier, who is hopefully better at avoiding the hazards of travel than the heroes are. On the very first week of their journey, Martel is thrown into a ravine during a tornado, and breaks his leg. Luckily he had bought a mule and cart, so he could be carried along easily. But then a freak earthquake opened a giant chasm in their path, and Martel had to abandon his mule, cart, and rope to get across it.

When they reached town, Kurgan, Martel, and Grimlocke all spent a week training to improve their skills and earn the right to be called Champions. Kurgan learned the Battle Rage skill, allowing him to have a sudden burst of fury once per adventure. Grimlocke learned to sing the deathsong of his people, which will give him determination to keep fighting when he is near death. Martel added the Banish Fear blessing to his repository. While they were training, Löwenbräu spent some time buying supplies, including powder and shot for his musket, as well as some bandages and rope.

The much more formidable warriors now felt ready to seek out greater dangers on their next adventure.
Posted by Craig Welter at 8:00 AM