I finally managed to get in a game of Age of Sigmar at the local gaming store. We played to 1250 points. I used mostly Deathrattle, though officially it was Grand Alliance Death, since I took a wraith, which can't be taken as allies to Deathrattle. I faced off against Stormcast Eternals, which obviously I know nothing about.The battleplan was Duality of Death from the General's Compendium 2017. There were two objectives on the table between the two armies. Only a leader could capture an objective by moving within 3" of it. As long as that leader stayed within 3", they would hold the objective, and at the end of their turns get a number of victory points equal to the number of turns they had held the objective for (and also heal that number of wounds).

My army was two units of 40 Skeletons each, one unit of 20 Grave Guard, a Necromancer, a Wraith, and a Wight King as my general. I also had a summoning pool of 80 points intended for use summoning a Banshee. The Necromancer and one unit of Skeletons would try to prevent the enemy from holding the objective on my right, while the rest of my army tried to capture and hold the objective on my left. 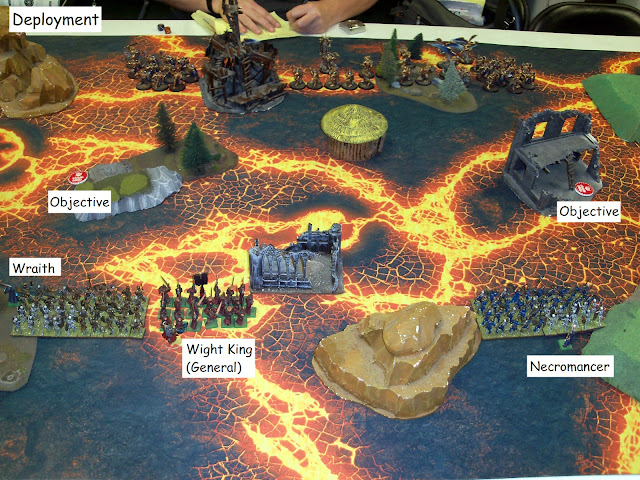 Death win the roll-off and let the Stormcast Eternals take the first turn. 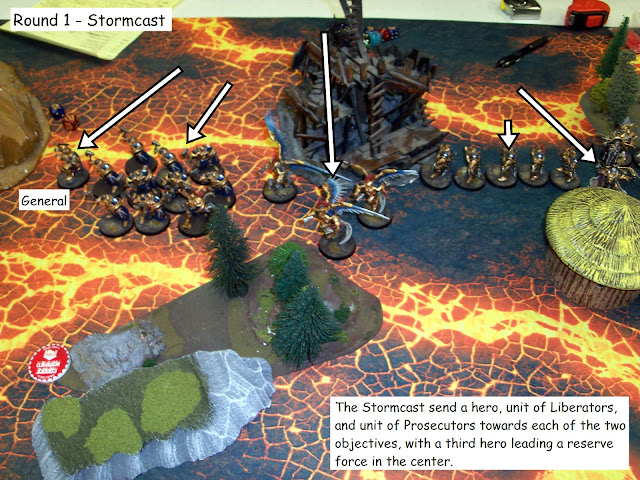 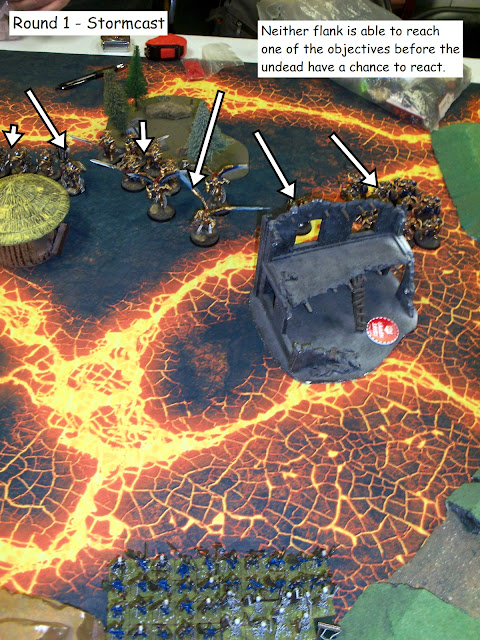 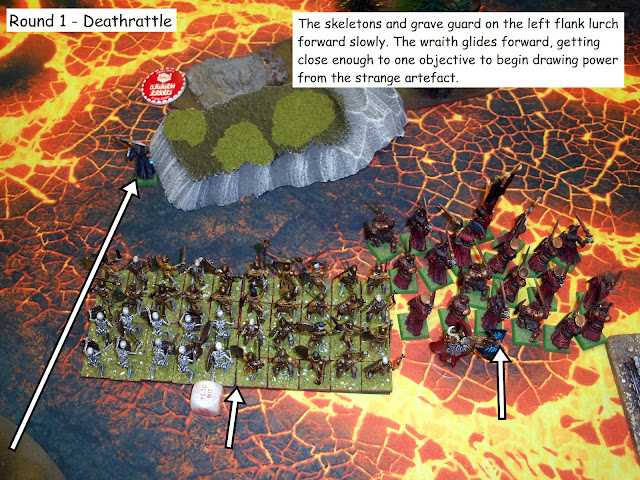 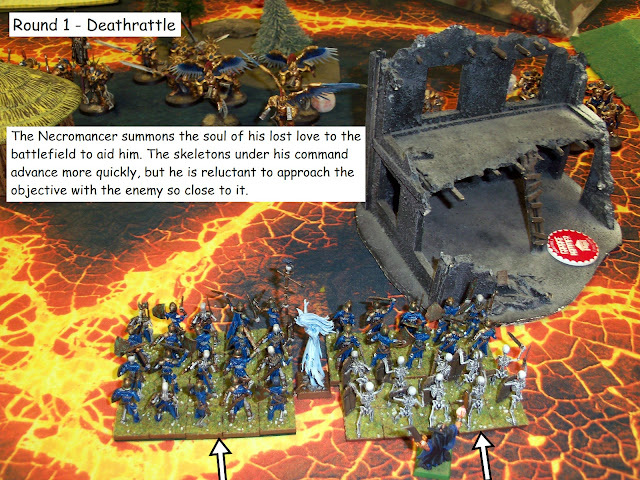 At the end of the first round Death have one victory point, the Stormcast Eternals have zero. 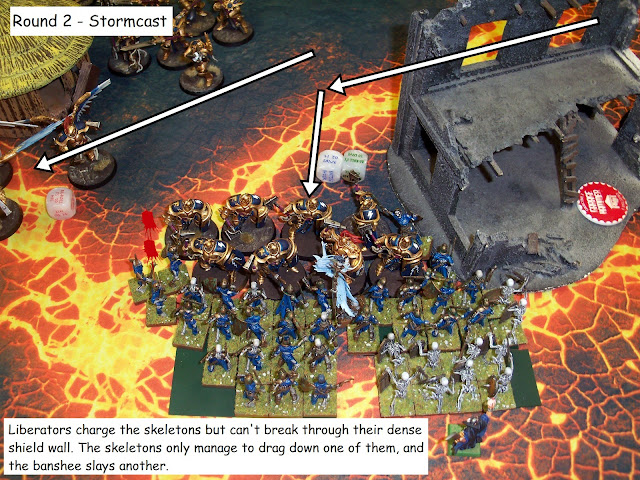 Not pictured: A stormcast hero moves close enough to capture the objective. 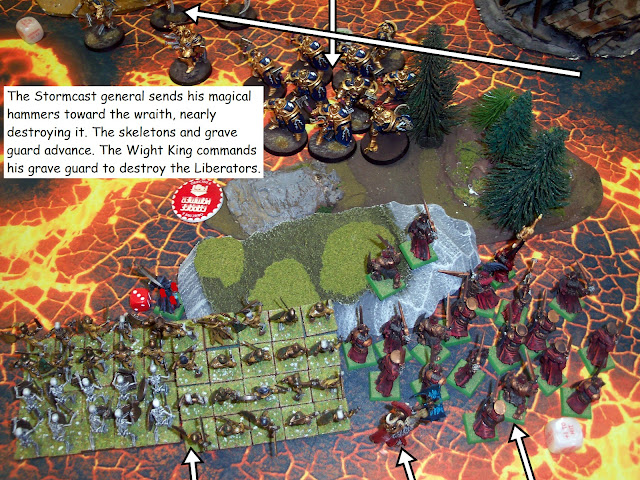 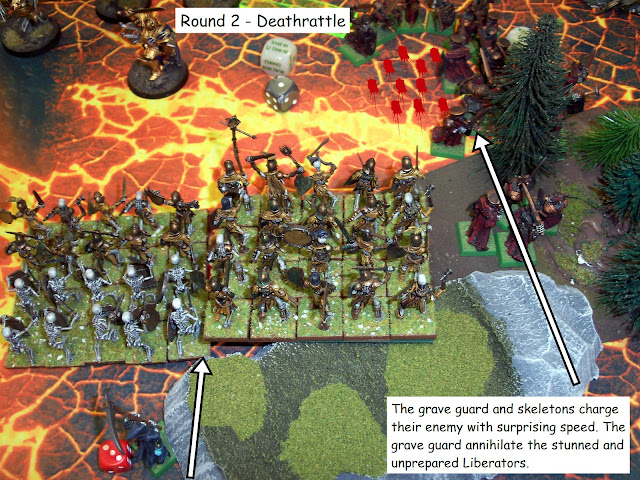 The Wight King used his command ability to give the Grave Guard +1 attack, and they rolled 12 for their charge so they all made it into combat with the Liberators. At the end of round 2 the score is Death: 3, Stormcast: 1. 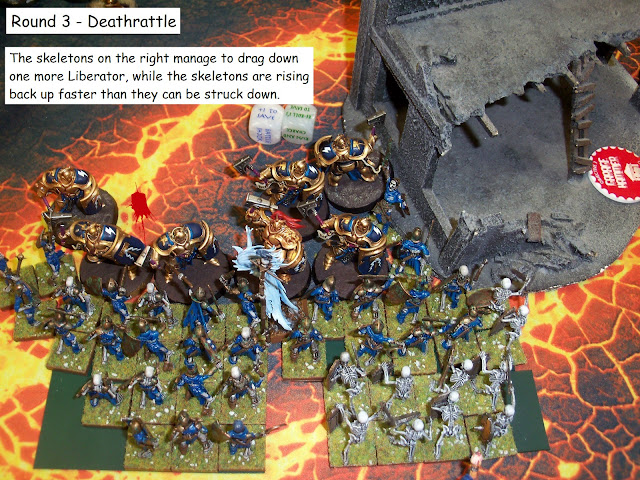 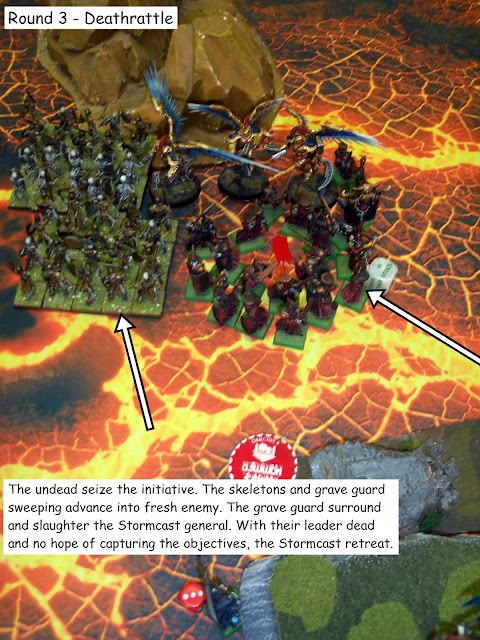 At this point we ran out of time. Death had captured their objective earlier so were ahead on the victory points. They had also destroyed the enemy general and a unit of Liberators while taking no losses of their own. All of their casualties had come back due to the banners their units, which bring back D6 Skeletons and D3 Grave Guard in each Death turn. Also, the Wraith was actually healed back up to full wounds at this point as a result of holding the objective. So, the result was inconclusive, but Death certainly had an advantage at this point. Hopefully, if I am able to play again soon, I will be able to play quicker as I now have a much better grasp on how to play.
Posted by Craig Welter at 10:59 PM