Artemis, Dionysus, Hera, and Hephaestus leave Olympus to hunt a mature (level 2) screaming antelope. They decide at the last minute not to try to go after an older antelope because they don't want to risk failing to return with badly needed resources that will be essential in preparing for the return of The Hand.

The survivors smell the rotting meat of a hulking corpse up ahead and find a dead antelope. Then the rotten stone faces beneath their feet start to give way, but they all manage to escape. As they proceed, Dionysus stumbles upon the site of the settlement's first hunt, which he remembers well. He tells the others about it (all survivors gain +1 survival and +1 understanding), as they nod in understanding. Artemis in particular gains significant insight from the story (gains +1 evasion and Explore ability that gives +2 to investigate rolls).

They reach their usual antelope hunting grounds and find evidence of a mass migration. Nothing remains but uprooted acanthus (antelope moves 3 spaces away on hunt board). As they head off, one stone face in the sea of many catches the Hephaestus's eye. He stops to investigate (+1 courage) and discovers that the face is his own, but older and wiser (+1 survival and +1 understanding). This gives him a profound insight (gains +1 accuracy, Explore ability). The survivors head out in a new direction, but soon a heavy mist envelops the them, obscuring their lantern light. Luckily they end up stumbling through it in the right direction.

However, as they exit the mist, they are shrouded in overwhelming darkness. Artemis finds peace in the darkness, regaining her lost sanity. Dionysus envisions a strange fruit and smashes it, sapping his will to survive (lose all survival). Hera simply lashes out in the darkness, hitting only her fellow survivors. Hephaestus has some startling visions, which result in his believe that he gains strength from his insanity (gained Quixotic disorder, +1 strength and survival when departing if insane). After exiting the darkness, they reach a grazing field where they spend time gathering and eating small leaves, which heal all the pain caused by Hera's lashing out at them in the darkness.

The survivors eventually continue the hunt, and a valley of sharp white stones opens before the them like a toothy maw. As the survivors push and climb through the jagged spires, they find even the shallowest cuts bleed without stopping. Artemis avoids getting cut (spending 1 survival) and Dionysus bandages his cuts, while Hera and Hephaestus are left with severe bleeding (2 bleeding tokens and one damage to body). Leaving the valley, they encounter a strange sight.

A statue twice as tall as any man sits before a great anvil, with a hammer in each of its six hands. Transfixed, the survivors watch the statue beat a red-hot sword that lies across the anvil. Hera attempts to grab the sword from the statue, but is not quick enough. Dionysus is next to try, and with a legendary display of reflexes he is able to grab the Muramasa sword from the anvil. It is a powerful weapon, but so incredibly sharp that it can easily slice pieces off a monster, but the wielder risks harming themselves in the process (it increases chances of a critical hit, but each critical hit puts two bleeding tokens on the survivor).

A carpet of huge, writhing ticks covers the ground ahead of them, but the survivors successfully smash the ticks away and keep going. As they close in on their quarry, Artemis springs a trap, but it is old and weak and barely scratches her leg. Shorty thereafter they find an antelope and approach it. The plan is for Dionysus to do most of the attacking with the Muramasa sword he found on the hunt. Between his natural luck, luck charm, and the properties of the weapon, he believes he can easily cause critical damage to the beast and slice off pieces of it that could be useful resources. There is some risk, however, that if he is too overzealous he might end up killing himself in the process. 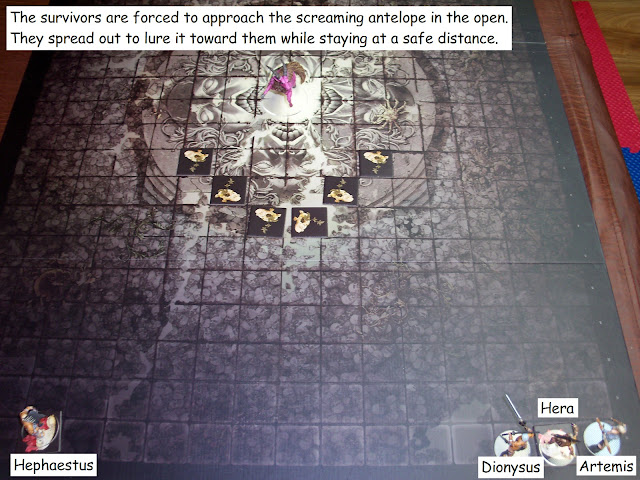 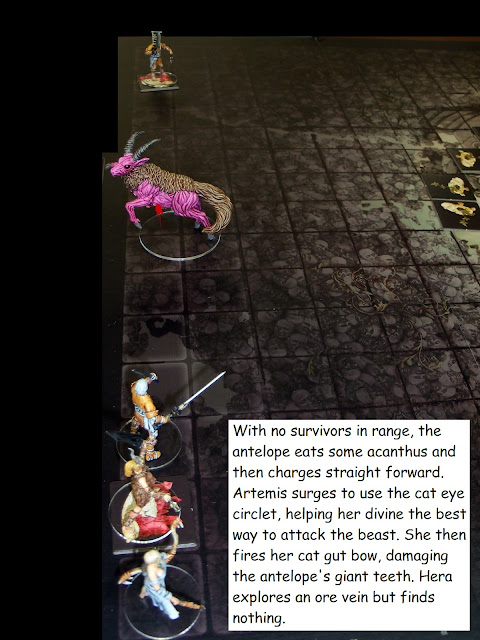 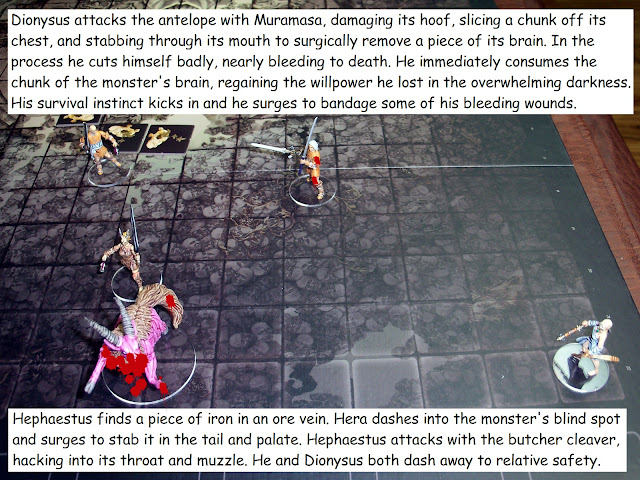 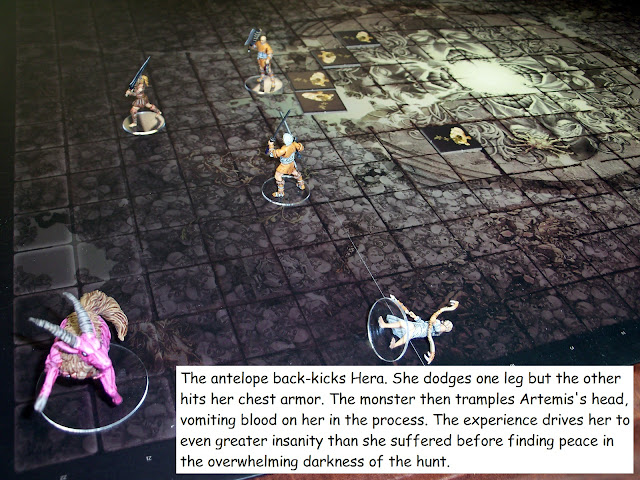 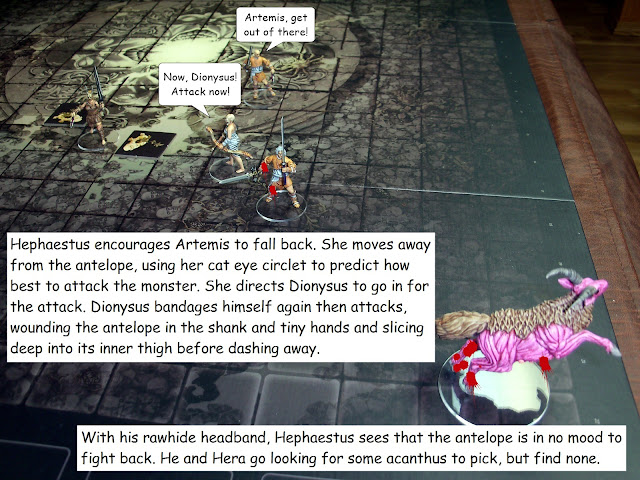 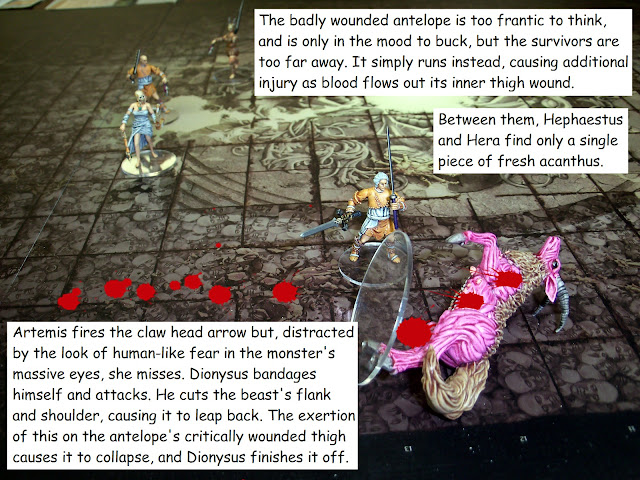 From the years of accumulated experience, Dionysus begins to appreciate the strategic elements of a monster encounter (gains strategist fighting art, which allows placing some terrain before a showdown begins). Through continued use of her bow Artemis becomes stronger (+1 strength from aging) and more accurate (gains bow specialist, which allows re-rolling a miss), while Hera becomes more proficient with a sword (gains sword specialist). Even though Dionysus risked his life wielding the Muramasa in an effort to gain more resources from the encounter, the survivors return to Olympus with just an average haul of supplies. (I believe only two of the criticals Dionysus caused were to locations that gave additional resources, and he consumed one of those right away to regain the survival he had lost in the Overwhelming Darkness event, so I risked him bleeding to death for very little gain!)

Back in Olympus, Hephaestus becomes convinced that a powerful presence is nearby, and that the settlement is haunted. He paints strange patterns all over the settlement with his own blood to ward off evil spirits, but is still possessed by them. (As a result of the Haunted settlement event, Hephaestus gains +2 strength and +1 accuracy but can no longer use weapon specializations or masteries or fighting arts, and he has the Red Fist fighting art that gives everyone a +1 strength token at the start of a showdown, which they can also use as survival! It hurts to lose that one.)

The survivors know that The Hand is due to return soon, and heavily debate the best way to prepare for it. They decide that the best strategy against The Hand will be to simply try to survive as best they can. They start by performing the armor ritual at the shrine, but their faith has wavered and they only gain some insanity. Then they endeavor at leather making to create enough leather to combine with their iron to make two beacon shields. They hope this will be enough to keep at least two of them alive against The Hand. The other two who face him will have to hope that dodging and chance can save them.

Having used almost all of their resources to make the shields, the survivors are unable to innovate. Aphrodite endeavors to scrounge for scrap on the outskirts of the settlement. She finds one broken lantern, and feels a little braver as a result of her time out scavenging in the darkness. (+1 courage). She also spots The Hand approaching Olympus, and hurries back to prepare for the inevitable fight. Apollo, Hera, and Artemis also equip themselves and join Aphrodite to face The Hand near the edge of the settlement.
Posted by Craig Welter at 8:00 AM