Dionysus, Aphrodite, Athena II, and Artemis depart Olympus in search of a mature (level 2) screaming antelope. They want to gain as many resources as possible to replenish their recent losses. They also plan to harvest as much fresh acanthus as they can get their hands on so they can replace all the dried acanthus they expended in the fight against The Hand.

Dionysus wears a full suit of rawhide armor and the forsaker mask and as always carries his precious twilight sword, which he is finally getting good at wielding. Aphrodite also wears full rawhide armor and carries a scrap sword. Athena II wears the screaming armor and carries the counter-weighted axe. Artemis has only a skull helm to protect her, and is armed with a cat gut bow and claw head arrow. She also wears the cat eye circlet, which she can use to direct the survivors' attacks against the most vulnerable locations.

Not far from Olympus, the survivors find a broad plain with half-eaten acanthus plants strewn everywhere. Dionysus recognizes this as a sign that a large herd of antelopes is nearby, so the hunters lurk in the area. Soon they hear a thunderous boom approaching. The terrifying sound is that of a stampeding herd of screaming antelopes. The survivors corner one of the stampeding antelopes and drive it away from the herd. They then lay an ambush in order to attack the monster as it attempts to rejoin the rest of the herd. 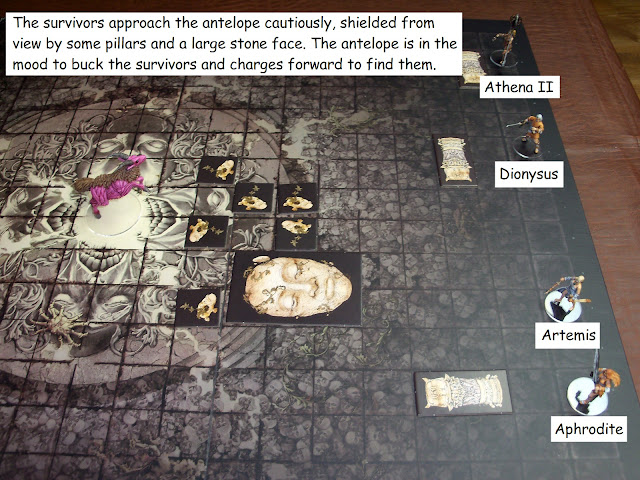 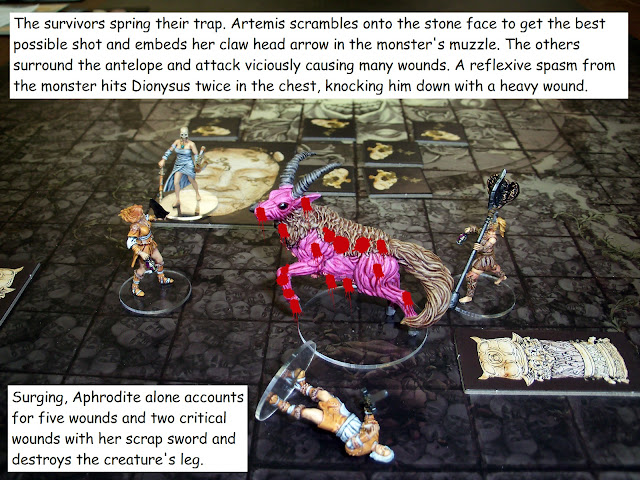 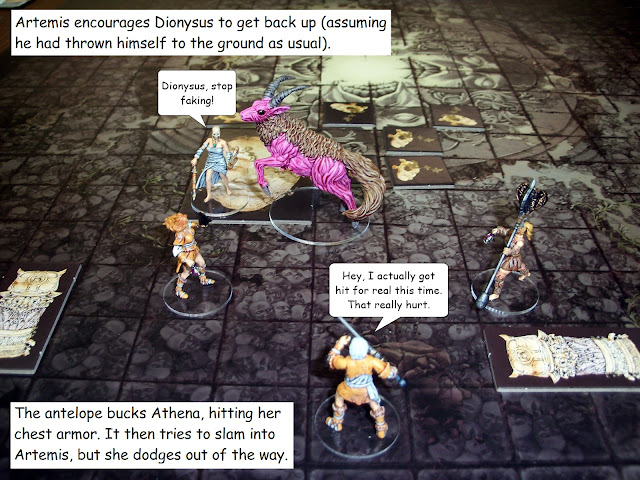 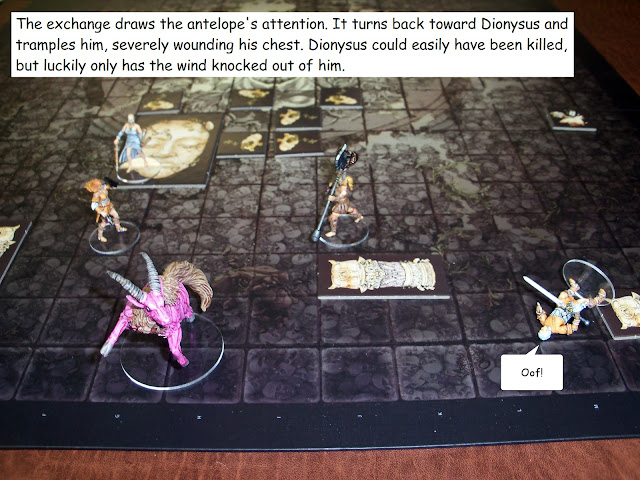 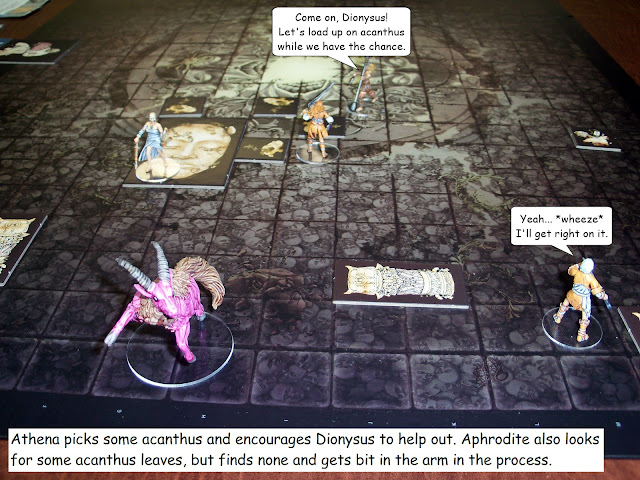 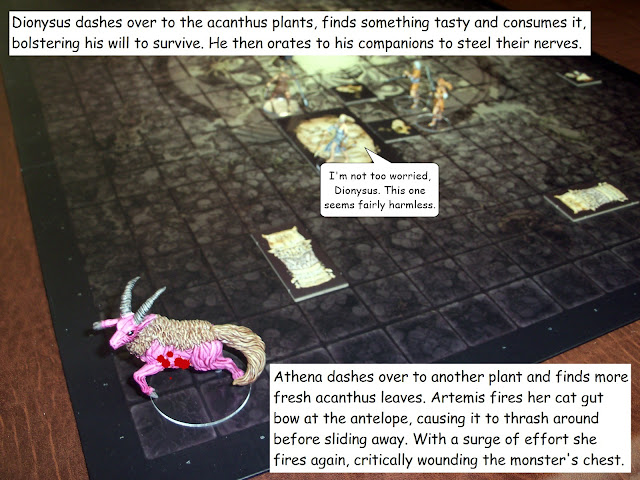 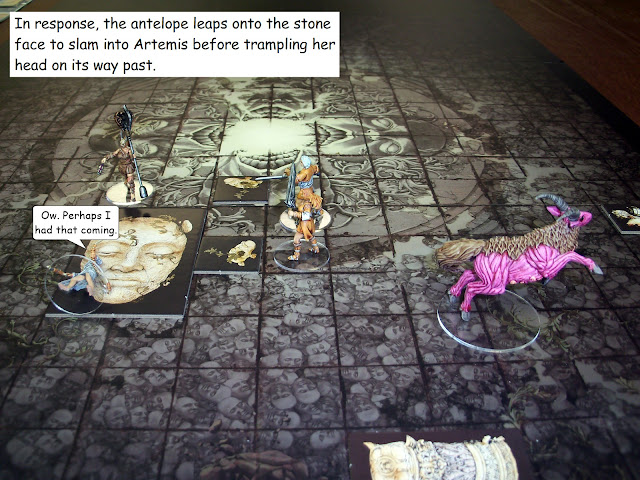 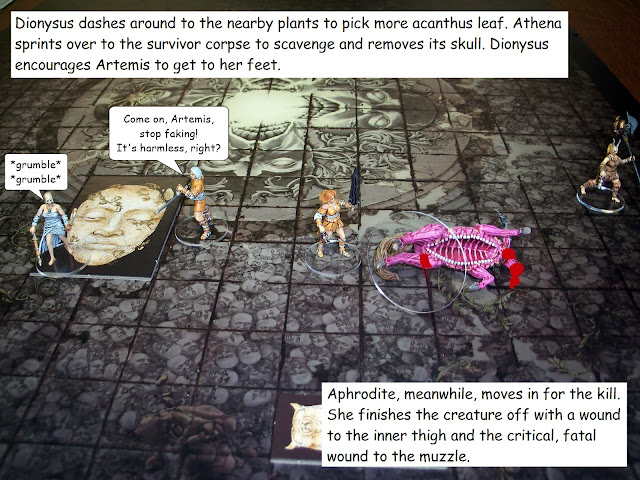 As a result of her hunt experience, Aphrodite becomes ambidextrous, which doesn't seem like it will be of much use to her. The survivors take their large haul of monster parts, some of which were sliced off during the battle, (resources gained from critical hits) along with several handfuls of fresh acanthus and a scavenged survivor skull, and head back to Olympus. As they enter the settlement, it calls out to the returning survivors in a chorus of unknown tongues. Aphrodite begins to speak in an incomprehensible language of endless babble (gains an impairment that prevents her from encouraging, and when she departs all departing survivors gain +1 insanity).

The survivors use an endeavor to innovate scrap smelting, and another to use their new innovation to purify some of their broken lantern scrap into a piece of iron. They use another endeavor to build a blacksmith, though the resources required to build any of the armor there are well beyond them at this point. They do make some dried acanthus with their newly acquired acanthus leaves, having seen just how effective it can be in treating life-threatening injuries. With a final endeavor the departing survivors perform the armor ritual, boosting their resilience (+1 armor to all locations).

The hunt team contemplates going after an even larger, older screaming antelope in an attempt to gain even more resources. It seems the previous showdown went well and a group of hunters on top of their game should be able to defeat a much tougher monster. On the other hand, it was a very short hunt so the survivors reached their quarry fresh and at their best, and even so Dionysus was nearly killed by the antelope. The risk versus potential reward of going after a more difficult quarry weighs heavily on the minds of the survivors.
Posted by Craig Welter at 8:00 AM