A group of survivors heads toward the outskirts of Olympus, where The Hand is perched nonchalantly atop a giant stone face, awaiting them. Icarus, the red savior, boldly leads the way. He wears a full suit of screaming armor and wields the counterweighted axe. The survivors hope that his super-human ability to always hit his opponent with every attack will allow them to defeat this mysterious threat. Apollo and Hades join him, both wearing full suits of rawhide armor. Apollo also wears the cat eye circlet, which he intends to use to predict the monster's behavior and avoid the worst of it, and is armed with a scrap sword. Hades carries a bone axe. The settlement having only enough armor for three, Hera is naked but for the skull of Ares she wears as a helmet. She carries the cat gut bow and a claw head arrow, along with a founding stone. If the situation gets desperate, she is prepared to attempt to finish the monster off or get one or two crucial wounds on it from a distance if necessary.

Not knowing what to expect, the survivors spread out and approach The Hand with great trepidation. 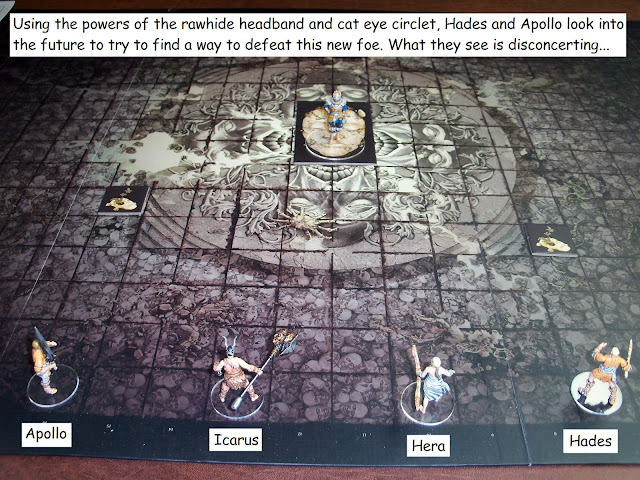 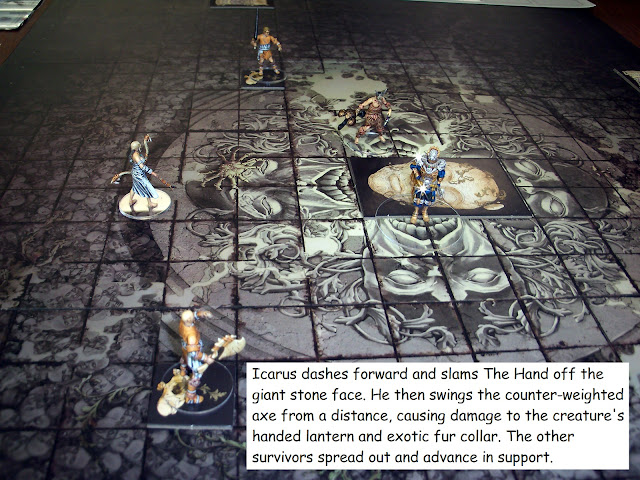 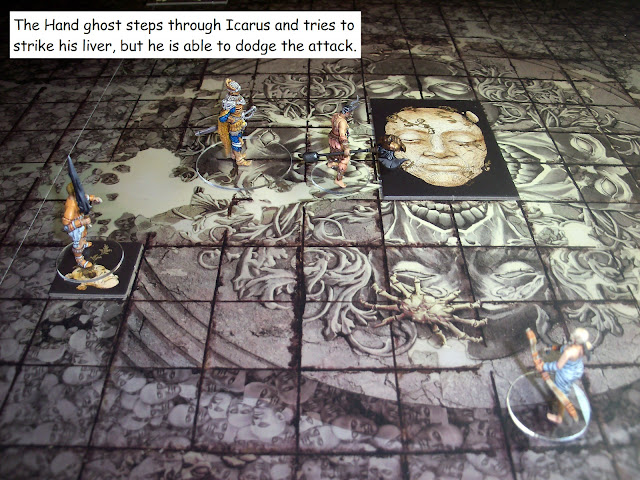 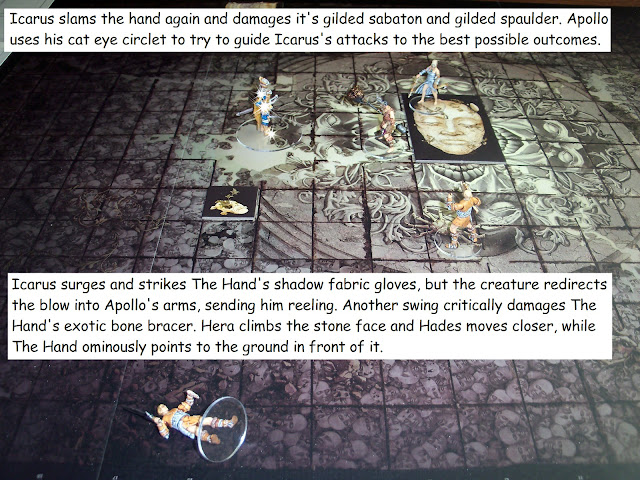 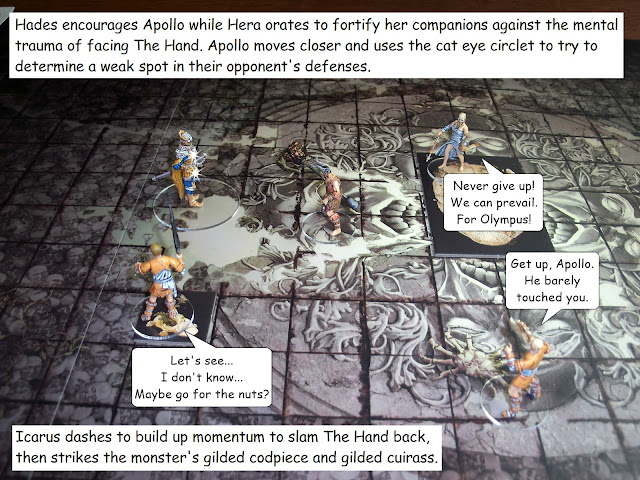 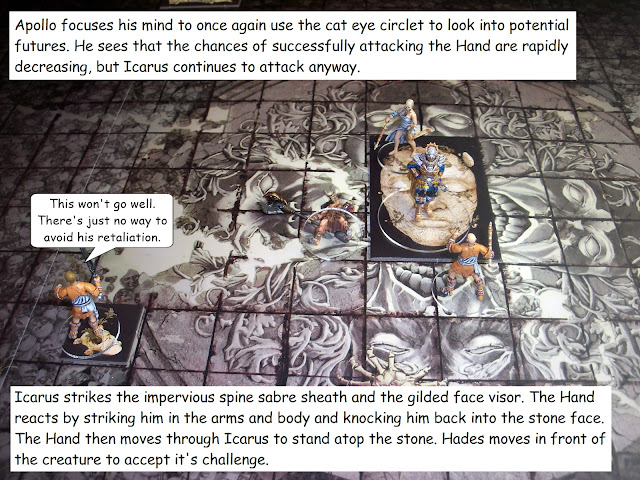 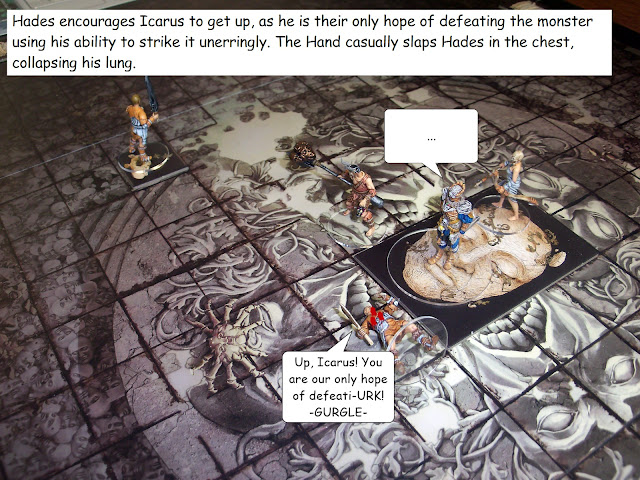 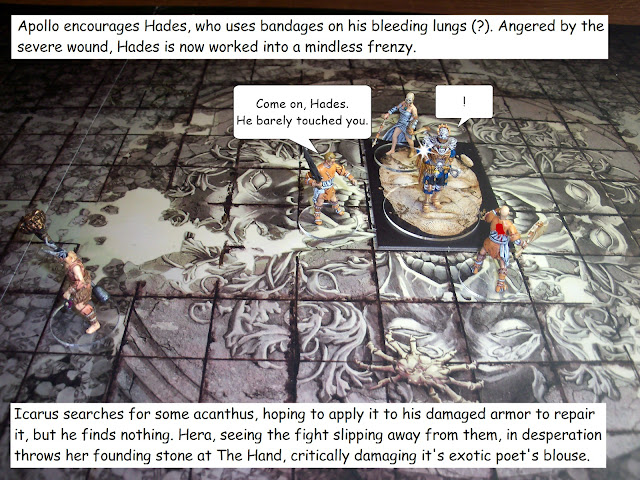 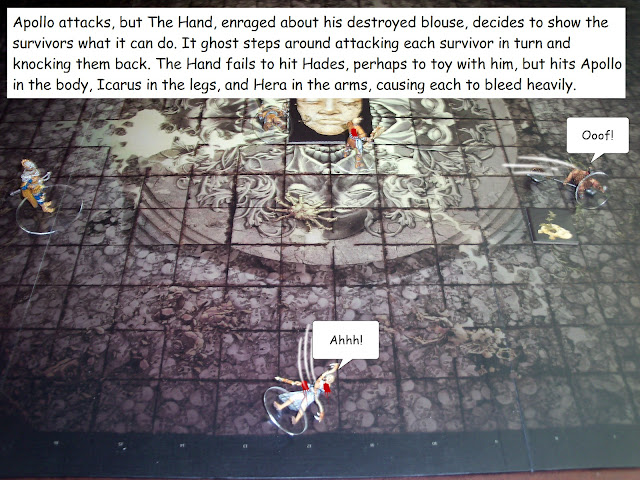 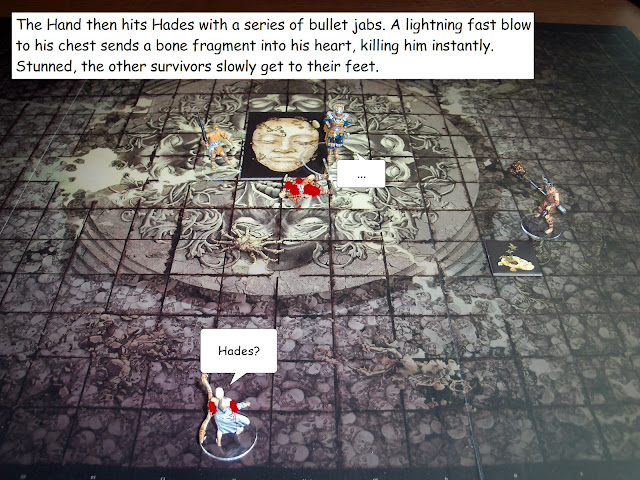 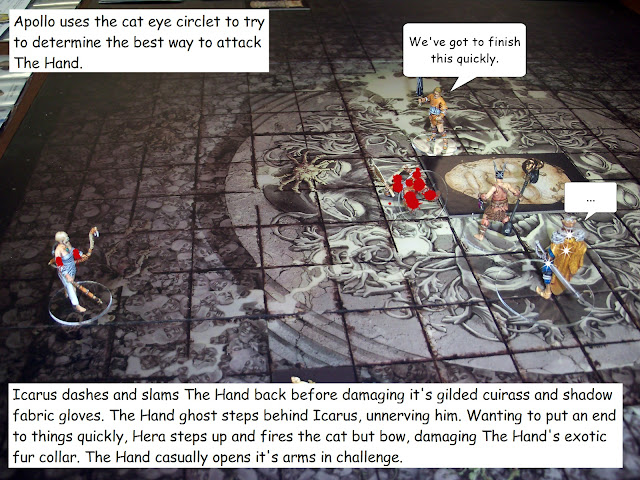 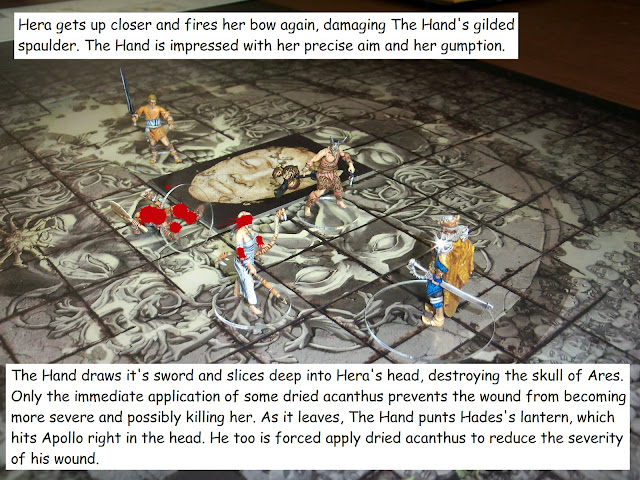 From the experience of having The Hand slice her head open, Hera gains a new fighting art. It allows her, if equipped with a sword, to always begin a showdown with the maximum will to survive. She also grows physically stronger from her accumulated monster fighting experience. From his experience Icarus learns the value of terrain in a fight, and gains the strategist fighting art which will allow him to take advantage of terrain in future showdowns. Icarus, Hera, and Apollo somberly attend to Hades, and find him quite dead. So they extract some love juice from his corpse.

After the showdown, the survivors find that a cloaked woman has entered the settlement. All that can be seen beneath her hood is the sparkle of perfect teeth. She offers to improve the dental health of the survivors if they are brave enough to risk the procedure. Apollo's completely inexperienced child is brave or foolish enough, and gets himself a set of monster tooth dentures (+1 strength) made from screaming antelope teeth.

The survivors of Olympus innovate the concept of face painting, which they imagine can have a variety of positive effects on someone who endeavors to create a good look out of face paint. They also finally build a leather worker location, but don't yet put the effort into transforming the few hides they have left into leather. They decide to stock up a bit more first so they can make a lot of leather in one go. Athena II augurs in an attempt to glean the meaning of existence, but is left will only a slightly increased will to survive (+1 survival).

Aphrodite, Athena II, Dionysus, and Artemis prepare their gear and get ready to depart on another hunt. Because the fight with The Hand cost the settlement most of it's dried acanthus, they decide to hunt another mature screaming antelope. Since antelopes usually graze on acanthus, the survivors hope this will give them the opportunity to harvest more acanthus plants to make more of the life-saving substance. They also need to gain as many resources as possible to make up for those they recently wasted, and to build a fourth suit of armor. After seeing what The Hand could do, they know they will need to work on creating greater protection for their survivors if the settlement is to last much longer.
Posted by Craig Welter at 8:00 AM