The feudal Imperial world of Beresinia is engulfed in war. Rebellious nobles have overthrown the rightful Imperial authorities, and now vie with each other for control of the world. Though the beleaguered Imperium of Man has little manpower to spare, some Imperial forces have arrived to attempt to restore order and reimpose Imperial rule on Beresinia. In one warzone, Count Xuvorov, one of the driving forces and leading conspirators in the rebellion, finds himself engaged with loyalist forces while trying to maintain alliances with other rebellious nobles and even forging relationships with several Xenos forces off-world. One of his army's light infantry regiments, colloquially knows as Kutuzov's Rangers, is currently operating deep behind enemy lines to sow confusion and disorder in the loyalist forces.

Kutuzov's Rangers have been operating in the field so long, sabotaging loyalist installations and ambushing loyalist forces, that they have "gone native". They operate far away from the main body of the Count's forces and have little contact with the rest of the army. Now, Colonel Kutuzov's men have uncovered some critical information about approaching Loyalist reinforcements. The dataslate containing the details of the approaching force must be delivered to Army high command so the best use can be made of this crucial intelligence. Kutuzov has assembled a hand-picked kill team to entrust with this vital mission.

The gung-ho Ensign Jimmy is chosen to lead the team, joined by his equally gung-ho order bellower (comms specialist) Rynsk. Polanski the Pious is chosen for his skills as a scout and brings his flamer. Ivanek is a crack shot (sniper specialist) with his meltagun, and puts his duty to his superiors above all, following every order to the letter. They depart on their mission with three other rangers (tempestus scions) and also five peasant conscripts (infantry squad guardsmen) to sacrifice to distract the enemy as needed.

Little do they know, a heavily armed kill team of Adeptus Astartes of the Salamanders chapter is already on Beresenia assisting the loyalists. The Salamanders have been scouting out the enemy factions, and are now on the trail of Ensign Jimmy's men. In order to get the dataslate of valuable intelligence back to army high command, Jimmy's men will have to fight their way through an active warzone while being hunted by the Adeptus Astartes kill team.

The Salamanders kill team is finally able to pin down the rangers and force an engagement. In order to get their message through, Ensign Jimmy's kill team will have to sweep and clear the area of the enemy. If the do so, they will be able to push forward with their mission. If the space marines are able to clear them from the area, they will need to find another way to get through to their destination, delaying their mission. Whichever kill team cedes this ground to their enemy will find themselves with a much reduced area of the city that they are able to effectively operate in. 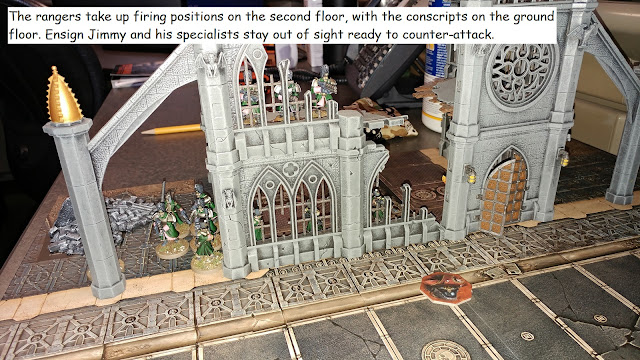 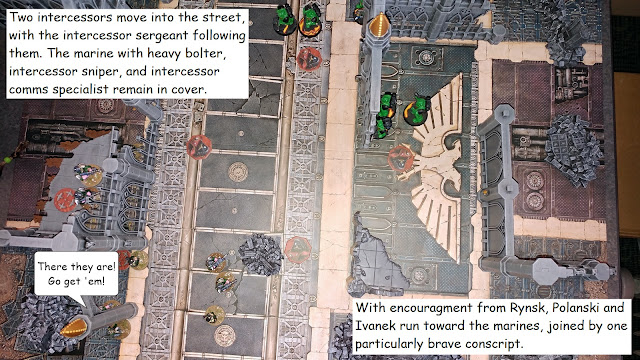 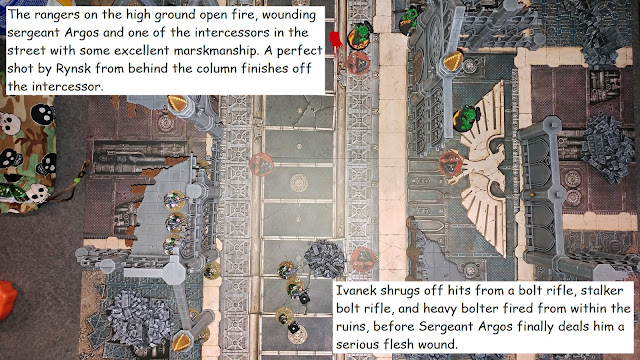 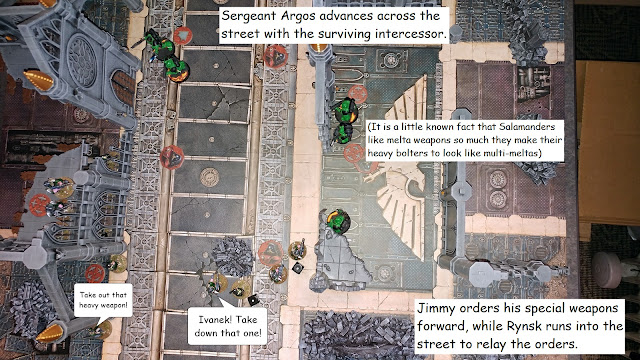 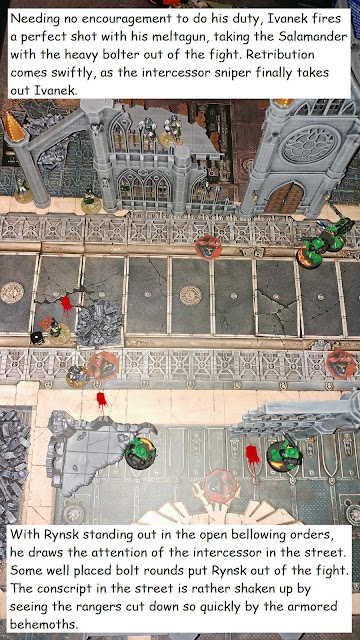 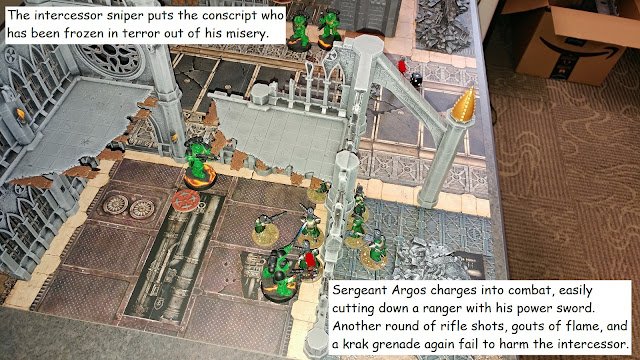 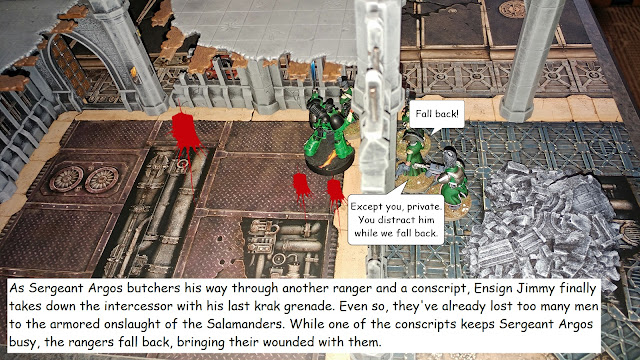 With Kutuzov's Rangers breaking and falling back, the Salamanders are left in control of the cathedral district. This will limit the territory where the rangers are able to operate in relative safety, forcing them to take a much longer path to reach army headquarters. Nevertheless, the rangers have performed well in their first encounter with the Emperor's mighty space marines, taking half of them out of action and wounding their leader. The rangers are able to evacuate their casualties, except for the stunned and wounded conscript who was executed by the intercessor sniper and died instantly. Another of the wounded conscripts is badly injured and will need some time to recover, but the rest of the team, despite their injuries, are soon back in action.
Posted by Craig Welter at 8:00 AM