I was lucky enough to receive some sample models from a brand new range of miniatures. They are 1:200 scale French Napoleonic infantry. This range is being created by a man who on The Miniatures Page goes by the name InkBiz. The figures aren't for sale yet, but he was nice enough to send out some samples to some of the people on TMP who have shown interest in them, including myself.

His goal with this new range seems to be creating correctly proportioned and scaled figures, which I'm sure is very difficult as such a small size. Most 10mm figures I've seen, and all 6mm figures, are really chunky and thick. GHQ are the only 10mm figures I've seen that look to have roughly human proportions, until I got these samples from InkBiz. So I thought seeing the two ranges side-by-side might make for a good comparison.

Here are some pictures of the InkBiz 1:200 French Napoleonic infantryman next to one of my spare 10mm GHQ American Civil War infantry figures. They are actually not all that different in size, though the InkBiz figure is taller because it is on a thicker base. The GHQ figure does have slightly crisper detail, especially in the face. Being a different scale, the GHQ figure is slightly larger in general. I'm not sure the difference in size or detail would be very noticeable when seeing them at a distance on the gaming table. 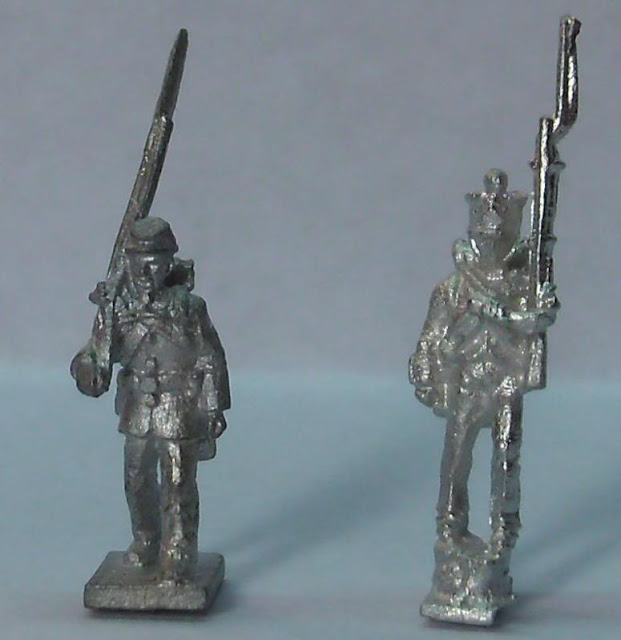 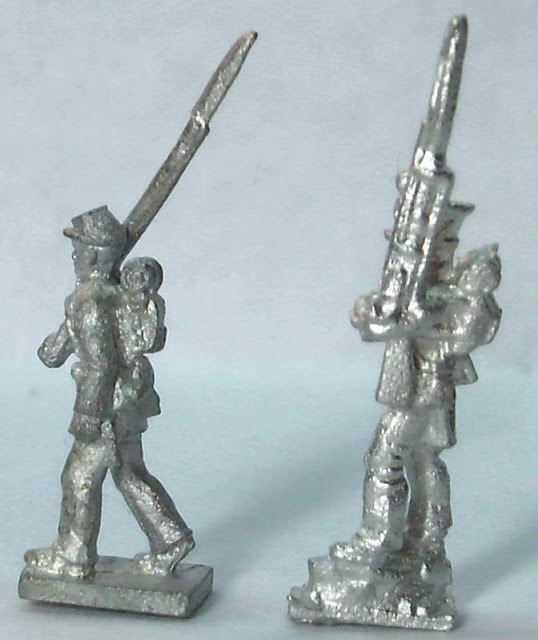 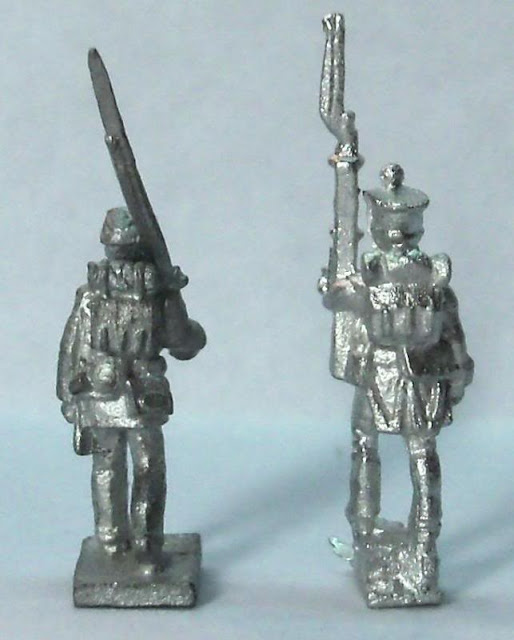 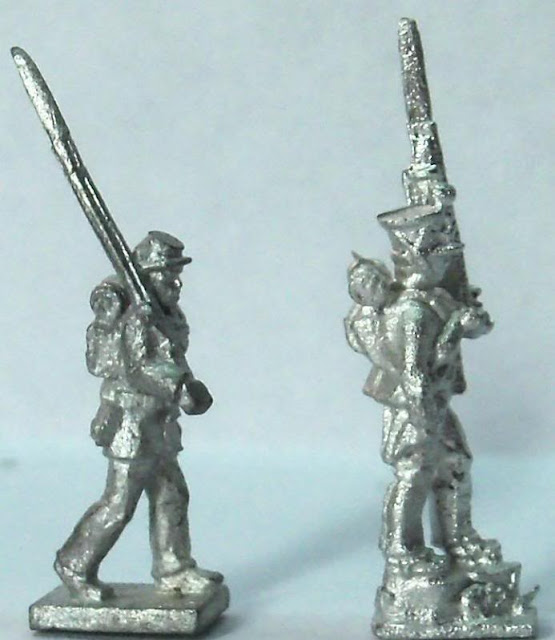 The InkBiz figure has a little weirdness going on with the elbow of the left arm, which looks a little strange. This was probably necessary to make it go around the musket without making the arm way too long, and again probably not noticeable on the table. The musket on the InkBiz figure appears to be the only exception to proper proportions, but I think that was a good decision. The thin rifles on my GHQ Civil War figures get bent all the time. Whenever the rifle is touched at all, it bends. The thicker musket on the InkBiz figure is extremely sturdy and likely won't get bent through any normal handling of the figures. It also allows additional details on the InkBiz figure's musket. So a good compromise between realism and practicality.

InkBiz also sent along a few figures that he'd primed and started to paint. Here's a couple pictures of that GHQ Civil War infantry figure between two of the partially painted InkBiz figures. They are obviously not finished, but at least this gives some idea what the figures look like with some paint on them. I'll post pictures of some finished painted figures as soon as I can finish painting them. 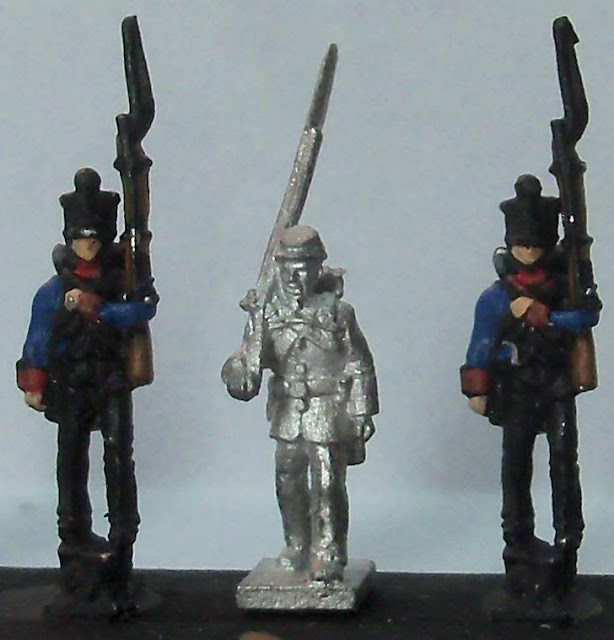 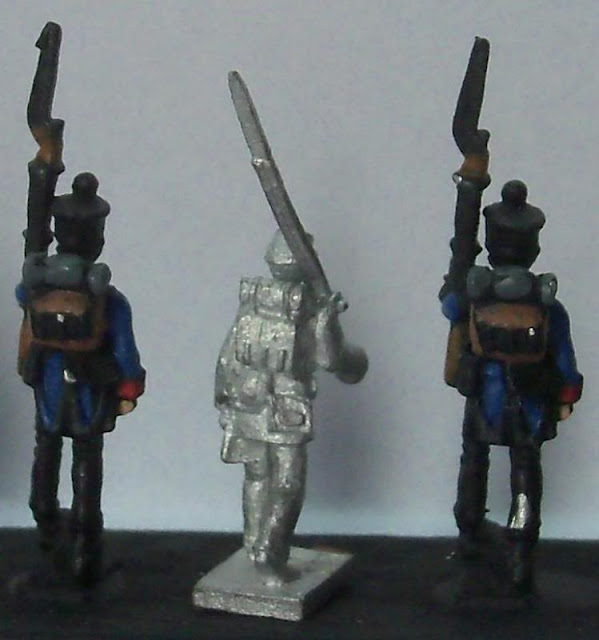 I think these pictures show the real strength of these Inkbiz 1:200 figures, which is the mass effect of seeing them all together on a base. I've put 12 of the figures, in 3 ranks of 4 figures, onto a 3/4" square base. Once they're painted and there are several more such bases, that is going to be a splendid looking unit. The fact they they are reasonably proportioned and that you can fit them so close together is going to make the finished units look great. 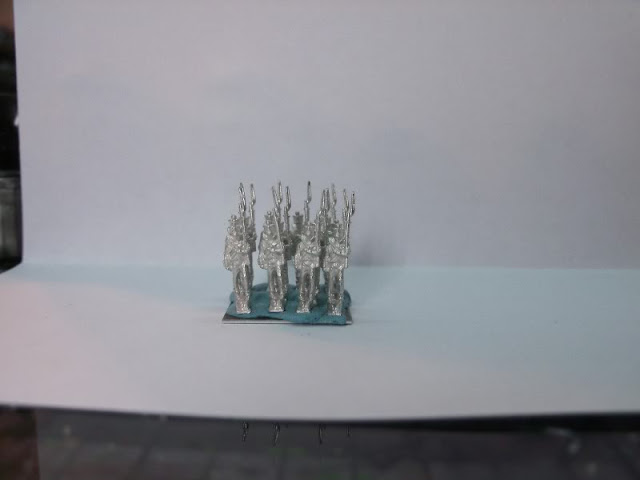 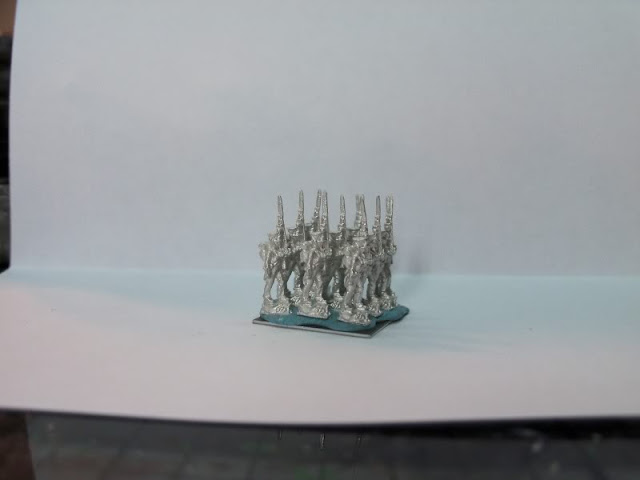 Getting the figures ready for painting was really easy. Whether by brilliant design or happy accident, the mold lines on these ended up in places where they aren't very noticeable. Even if you are really obsessive about cleaning off mold lines, it won't take much effort. There were two pieces of "flash" on each figure, one on the end of the bayonet that could just be twisted off, and one on the top of the blanket roll that I preferred to trim off with the hobby knife. There are some mold lines along the insides of the legs, which you would hardly even see when looking at them from above (though I removed them anyway). There are mold lines on the outside of the legs that you'd want to remove. The rest of the lines are mostly in places where they don't look out of place, like along the barrel of the musket. It's hard to explain, and even harder to try to photograph, but I was pleased with how quickly and easily I cleaned the mold lines and had these ready to paint.

All in all, this is a pretty nice figure. InkBiz plans to expand on the french range. To quote a post of his on the TMP message boards: "The remainder of the French Line are coming out in a few weeks (volts and grens), followed by command, then French Lights, and mounted command. After that artillery and cavalry will follow." No specific date on this so far, or when the figures might be for sale anywhere. He's also working on another range of even smaller 1:500 Napoleonic figures, which equates to about 4mm. Quite ambitious, but hopefully he continues with it.

As for these 1:200 figures, if the range does expand I will be getting some. If GHQ made any Napoleonic figures that weren't in that "Advancing" pose that I don't really like, it might be a decision about which range to use. As it is, as soon as I can buy InkBiz 1:200 figures for an army I want to collect, I will be getting some. I'll be sure to post again once I have some painted figures to show, or if I have any more information about how to purchase the figures.
Posted by Craig Welter at 8:00 AM