The folks at Pendraken Miniatures were nice enough to send me a few samples of some of their 10mm Napoleonic figures. I had mentioned somewhere on The Miniatures Page that I might be interested in getting some of the Pendraken Napoleonic Russian and Wurttemburg figures, but didn't want to buy a lot of them without knowing what they look like, and there are no pictures on their website. So the helpful Pendraken people offered to send me a few samples to get an idea of what they're like. They also threw in some samples of their latest 1809 French figures. So I thought I'd be helpful back, and post some pictures so others can see what they look like.

Before taking the pictures, I cleaned any mold lines and flash from the figures and primed them with white primer. I then applied some Games Workshop Black wash to the figures, so that the details would show up better in the photographs. I think the wash is a little thick for such small scale miniatures, because there are quite a few places where it didn't get in all the recesses. Hopefully it worked well enough to make the details easier to see.

First up are the sample figures from the Moscow Campaign Wurttemburg line. Here you can see one of the regular Infantry figures (I'm assuming this is the "March Attack" pose), and three command figures. In general, I'm assuming there is only one sculpt for each thing, so all the infantry in the same pose will be identical, and all the drummers identical, etc. But I'm not sure. 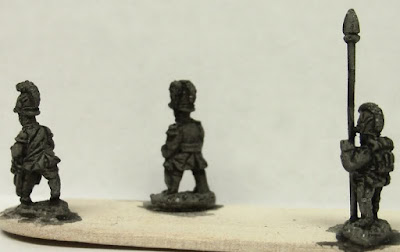 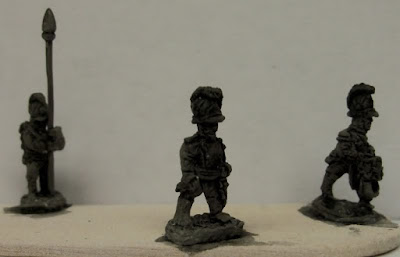 Next are the sample figures from the Moscow Campaign Russian range. First is a standard line infantryman, and again I assume this is the "March Attack" pose. Next is a couple of Cavalry figures. 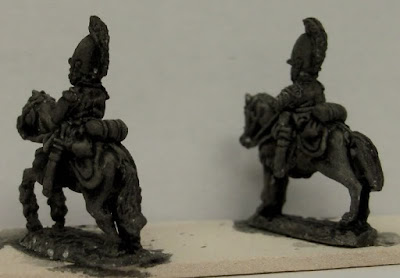 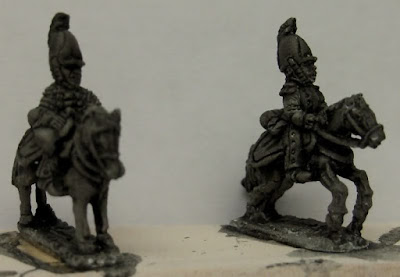 Both of these ranges are okay. They are very sturdy and have well-defined and probably easy to paint details, which is very nice. On the other hand, they are pretty chunky, with the Russian Cavalry in particular having freakishly large heads. That seems pretty normal for many ranges in 10mm or 6mm. I prefer more realistic proportions, but then of course the miniatures will be much more frail.

The thing that I really don't like is the strange pose on the marching infantry. Their legs look like they're way too far apart. They look bow-legged. The other thing I don't like, which just makes no sense at all, is that the Wurttemburg infantry are on really thick bases. They'll look like they're all walking on rock. Of course, I could work around that, except that the Russians are on really thin bases. So I'd either have to put all the Russian infantry on something thick to make up the difference, or it'll look like the Wurttemburgers just tower over the Russians, especially with the combination of their tall helmets and always making sure to stand on a big rock. And with both ranges being for the Moscow campaign, I would think it likely for these to be used together, so I'm not sure why there is such a big difference in their base thicknesses.

However, I'm not aware of any other company that makes 10mm Wurttemburgers, so I suppose I'll have to overlook my minor complaints. But since the Pendraken Russians don't match well with their own Wurttemburgers anyway, maybe I'll shop around and see if I can find other Russians I like better. I doubt that Wurttemburgers are huge sellers, so I won't hold my breath for any new ones being sculpted.

Now, to move on to a more recent range. I don't know when those Moscow Campaign figures were sculpted, but the Pendraken 1809 French range is pretty new. First is two of the figures from the Engineers pack, then an infantryman, and finally a couple of cavalry figures. Really, the pictures on the Pendraken site for this range are WAY better than mine, so you'd be much better off looking there. I just figured I'd include them anyway. 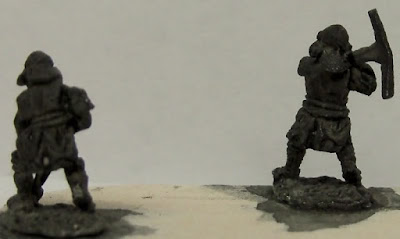 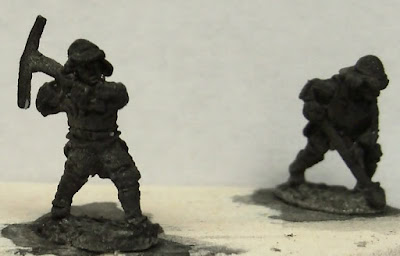 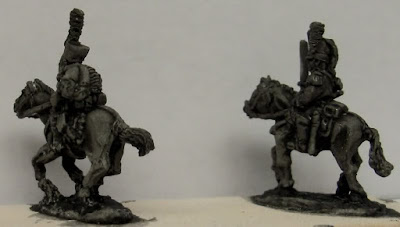 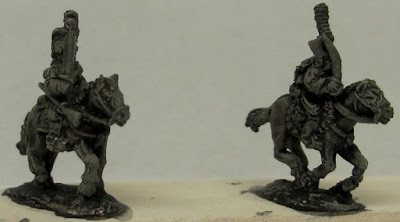 These are really nice. I think the sculpting has improved greatly. The marching infantry pose is much better, and the cavalry have much more dynamic poses. The figures also seem a little less chunky. I think the proportions are better, while still managing to keep a lot of crisp details. Unfortunately I don't need any 1809 French, but if I did I would certainly consider this range.

For those interested in this kind of thing, with a little filing of bases I think I could just fit four of the marching infantry side by side on a 3/4" wide base. I do like to base dense so it looks like an actual line. Still, if I use these figures I might just do 3 wide per 3/4" of base width, or 4 wide per inch. Then I could do the Russians on 4 bases (one per company) that are 1.5" wide each with 6 figures across, and the Wurttemburgers on 6 bases (one per company) that are one inch wide each with 4 figures across. Then it would work out to 6 inches across for both in line, with the same number of figures across as each other.

For anyone interested in Great War gaming, I've also done a post with pictures of some of the Pendraken World War 1 Miniatures.
Posted by Craig Welter at 8:00 AM