The Setup
This was a 1500 point standard Warhammer 40,000 game, pitting Eldar against Chaos Space Marines. It used the standard missions and deployment from the rulebook. The objective of the mission was simply to gain more Kill Points than the enemy. Deployment 12" on to the long table edges. The Eldar deployed first and would have the first turn. 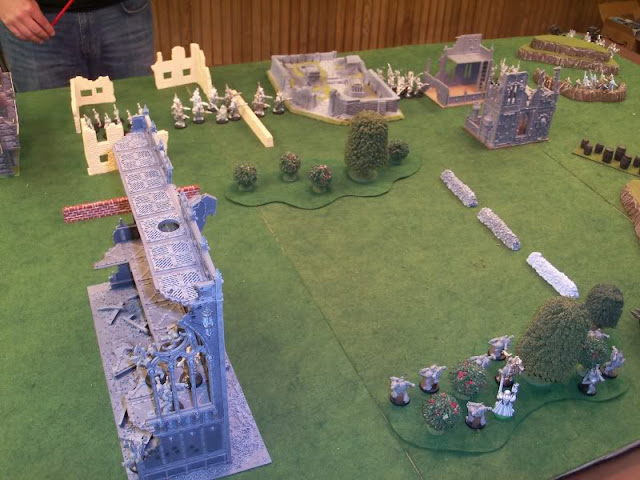 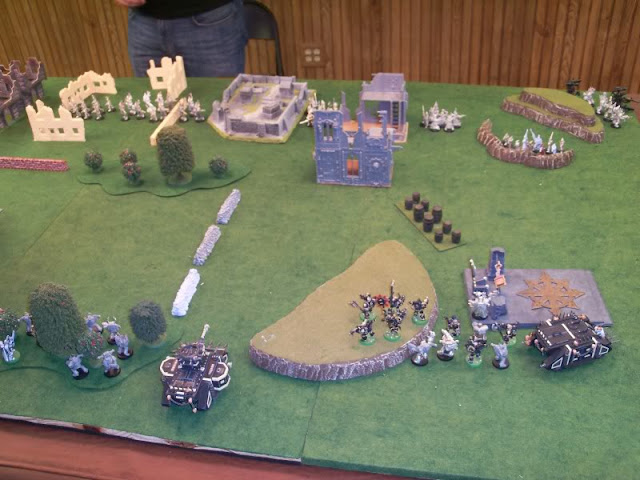 The Story
Renegade Space Marines of the Crusaders chapter are assisting a rebellion on an Imperial world, as they are wont to do. Pursuant to such, they have destroyed and then desecrated an Imperial church, along with some other outbuildings. Having done so, they are now occupying the area whilst a Thousand Sons aspiring sorcerer amongst them prepares an arcane ritual. This ritual, like any good arcane ritual, requires the sacrifice of a beautiful, scantily-clad woman. In truth, it probably just requires any old human sacrifice, but given the choice, why not choose the beautiful, scantily-clad woman?

And so the sorcerer has, and said woman is now chained up awaiting her fate. Unbeknownst to all, an Eldar Farseer has taken an unusual interest in the fair maiden (though to any who've seen her, the interest taken is perfectly understandable). The Farseer has examined the threads of future destiny, and decided that he needs to rescue the sacrificial woman. Perhaps saving her life on this day will result in many Eldar lives being saved in the future (probably the lives of all the Eldar he imagines he'll be fathering with her once he rescues her). At any rate, he doesn't have to explain himself to anyone and, furthermore, if he says the future of the Craftworld depends on saving some hussy, then save her they shall.

Turn 1
The Renegade Marines were pretty focused on their pillaging, so the Eldar managed to sneak up pretty close to them before being noticed. Once spotted, however, they were still out of range with most of their short-ranged weapons, so they all moved forward to close the distance. The sole exception was the rangers, who were in a good position and fired with their sniper rifles, but caused no wounds. There must have been a gust of wind. 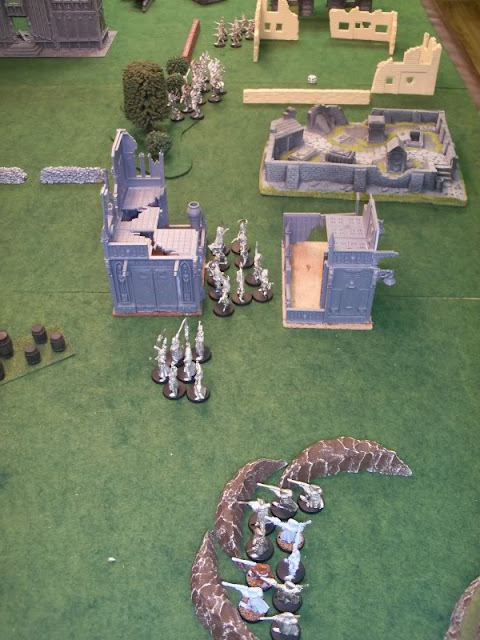 In response, the Berzerkers in the remnants of the church struggled through the rubble towards the now visible Dire Avengers, not realizing the epic struggle they were about to engage in. Most of the rest of the marines held their ground and fired, with the Predator causing a few casualties in the Farseer's bodyguard of Warlocks. The Thousand Sons, in the Rhino on the right flank, drove up to the other side of the Altar to protect it. 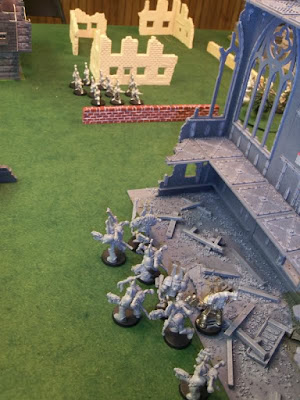 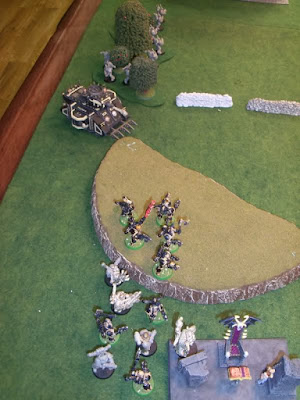 Turn 2
Appearing from out of the warp, a unit of aptly-named Warp Spiders destroyed the Rhino containing the Thousand Sons, forcing them to disembark. They jumped again to add some distance between them and their foes, but return fire from the Thousand Sons and Crusader marines nearby killed several of them. The rangers found their range, and managed to kill a couple of the Crusader marines on the hill by the altar. 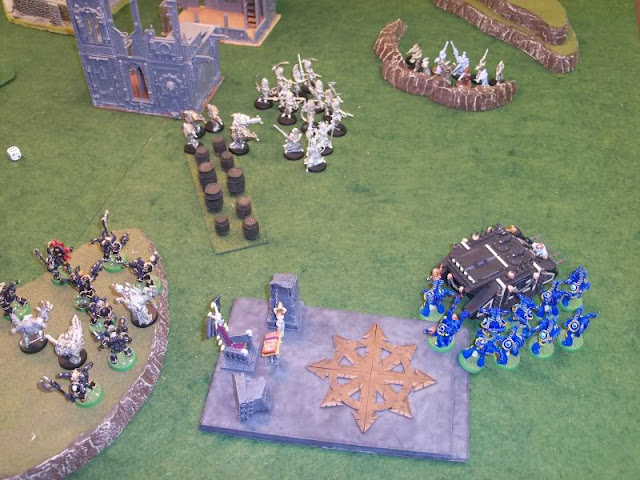 In the middle of the battlefield, the ponderous advance of the Wraithguard was held up when two Obliterators (in this case, renegade Techmarines) teleported in directly in front of them. They opened fire with everything they had, aided by the Marines in the woods behind, but after the barrage most of the wraithbone constructs still stood. 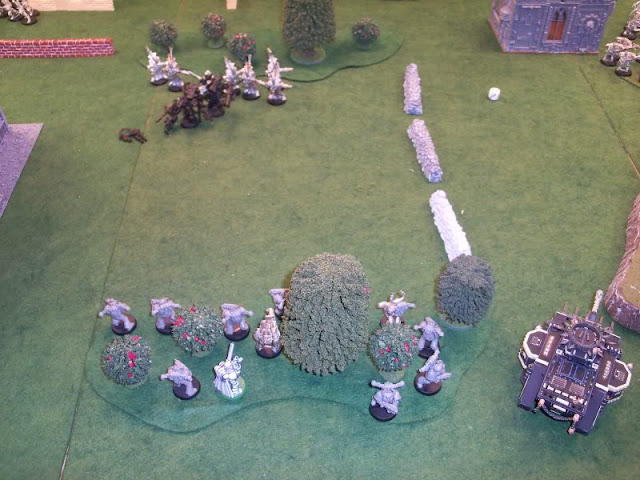 On the Renegade Marine left flank, the Dire Avengers fell back while firing at the Berzerkers, killing two of them. That really annoyed the Berzerkers, and they continued their headlong charge at their foe. 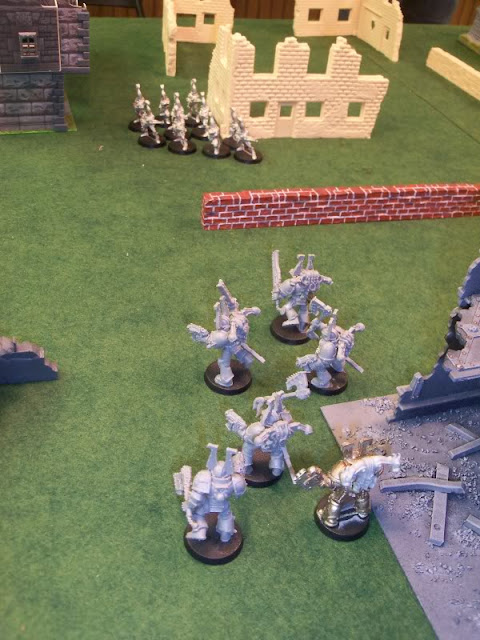 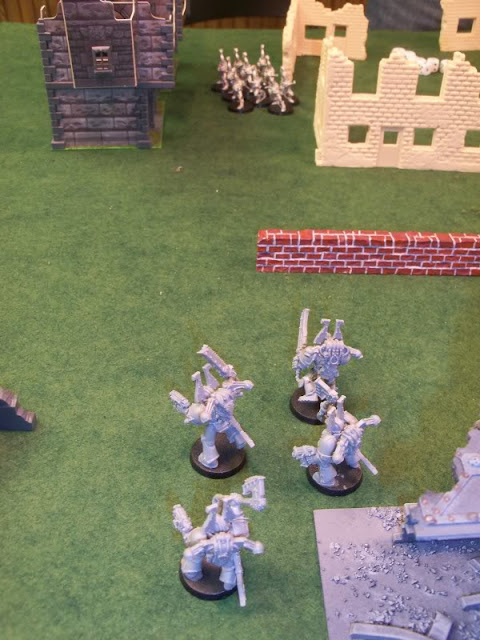 In the center, the Wraithguard all fired on the Renegade Techmarines, but only killed one of them thanks to their powerful force fields. A unit of Swooping Hawks landed, dropping enough grenades to kill a couple of the marines on the hill near the altar. The Swooping Hawks then immediately fled the battlefield upon taking a few casualties from return fire. 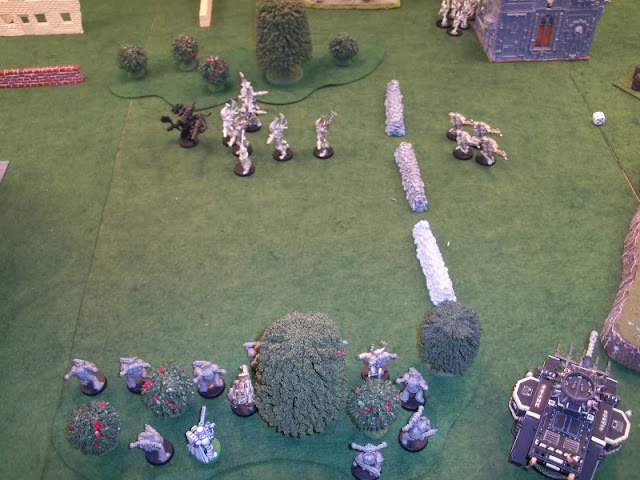 Having failed to eliminate the last Techmarine with warp-tearing energy fired from their Wraithcannons, the Wraightuard charged in to beat him to death with them instead. The Warlock leading them was crushed to death by the Techmarine, but the Wraithguard fought on, only managing to wound their adversary. 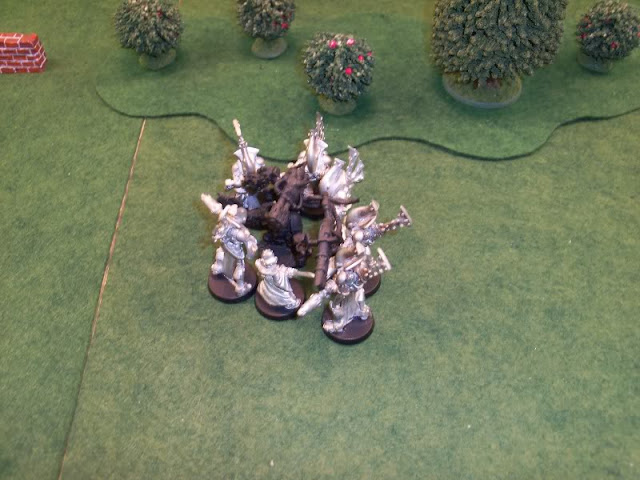 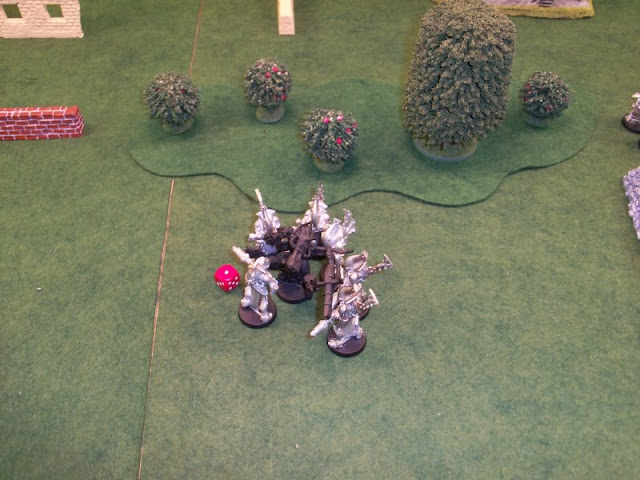 On the right of the Renegade Marine battle line, the Howling Banshees and the Farseer with his Warlock bodyguards sprinted full speed to assault the Thousand Sons marines near the altar. It doesn't take a powerful Farseer to predict how that turned out. However, one tenacious Thousand Son did survive the initial onslaught, and so prolonged his twisted semblance of life for another few seconds. 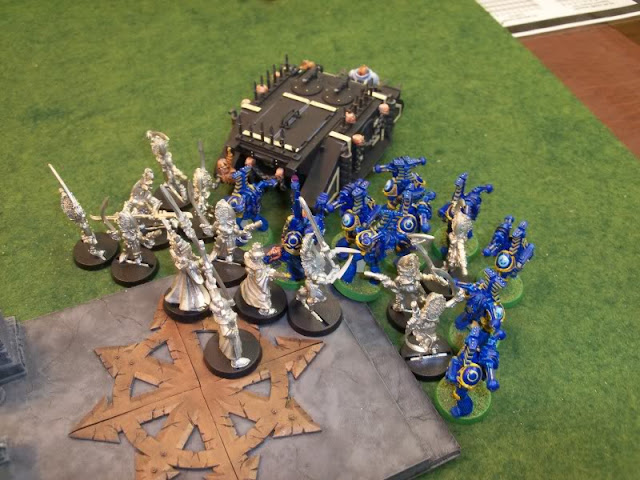 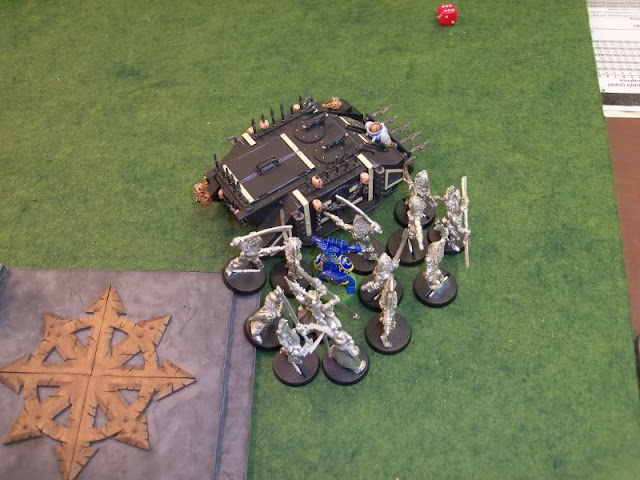 Previously, a unit of four Terminators, one with a Heavy Flamer, teleported down in the rear of the Eldar force to take out the pesky rangers. Unfortunately, they arrived far off target. They had, however, drawn the fire of the Rangers, who only managed to take down one of the Terminators. Undeterred by the loss, they advanced to within Heavy Flamer range and roasted most of the Eldar Rangers in an instant. The four remaining Rangers bravely, though foolishly, held their ground. 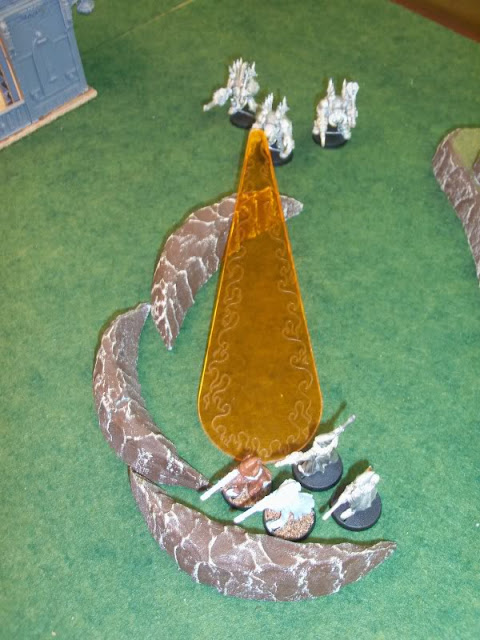 Turn 4
The Howling Banshees, Farseer, and Warlocks easily put an end to the one remaining Thousand Son, and advanced toward the Crusader Marines on the nearby hill. Sprinting at full speed, both Eldar units charged into combat with the Marines before they could get off a volley. Most of the Marines were cut down in a blur of flashing power weapon blades. Only the Lord and an Aspiring Champion survived long enough to kill the two Warlocks, before fleeing for their lives. The Eldar let them go, intent on the bigger threats still remaining. 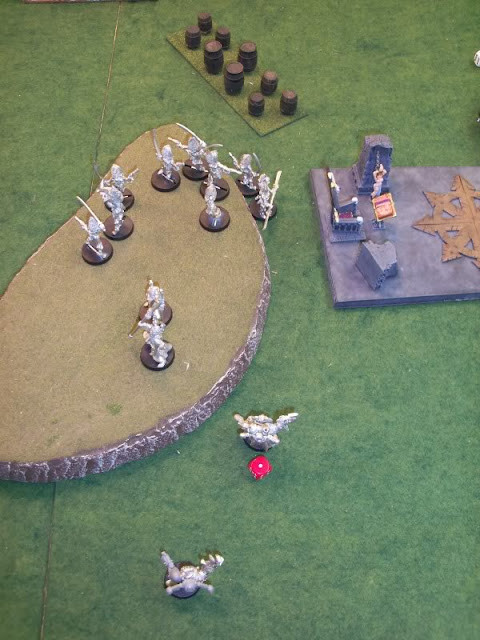 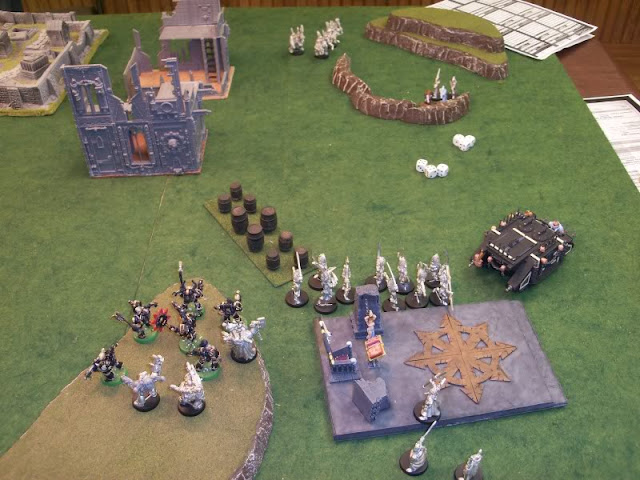 Shuriken catapults blazing (or whatever they do), the Dire Avengers charged into the Khorne Berzerkers. Normally this would seem pretty foolish, but the Berzerkers, finally enraged by the Eldar continuously staying out of assault range, had sprinted so quickly towards their enemy that there was simply no more room for the Dire Avengers to fall back. Knowing that they would soon be caught by the frothing, charging Berzerkers, they elected to reverse direction and charge, hoping the element of surprise would bring them victory. This was not to be. They only killed one of the Berzerkers, while three of them fell. Undeterred, they held their ground and the fight would continue. 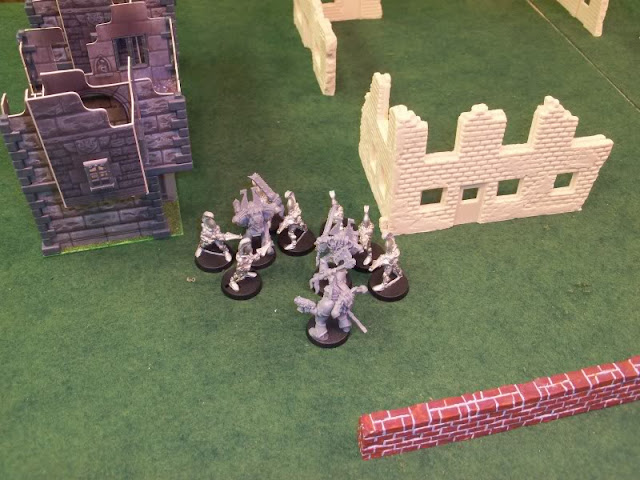 Meanwhile, the six Wraithguard were unaffected by the loss of their Warlock leader. With the determination of soulless constructs, they managed to beat to death the renegade Techmarine. 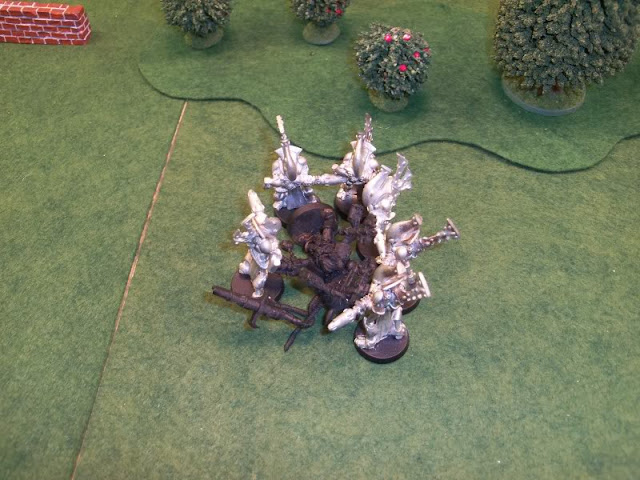 Turn 5
The Howling Banshees ran up to the crest of the hill, but were still too far from the Marines in the woods to assault. The Farseer examine the twisting paths of potential futures, and determined that he didn't want to be shot by the two Heavy Bolters and the Autocannon on the nearby Predator. With the psychic power of his Witchblade, the managed to destroy the tank. The Marines in the woods couldn't see the Farseer, and so again fired at the advancing Wraithguard, cutting down three more of them. Elsewhere, the Berzerkers slaughtered the remaining Dire Avengers, and the Terminators easily finished off the few remaining Rangers. The forces on both sides were severely depleted by this point. However, it is not in the nature of the Crusader marines to hold ground long, and the time had come to withdraw. 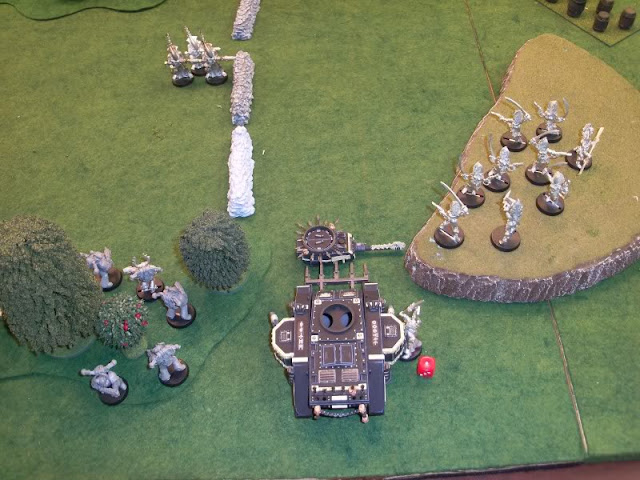 The Result
The Eldar force destroyed a Rhino and a Predator, wiped out a unit of Thousand Sons and the unit of "Obliterators", and broke the Chaos Lord and a unit of marines for a total of 6 kill points. The Renegade Marines wiped out the Dire Avengers, Rangers, Warp Spiders, and the Farseer's retinue, and broke the Swooping Hawks, which gave them only 5 kill points. A victory for the Eldar, as the Renegades were forced to withdraw, leaving the sacrificial maiden in the hands of the Farseer. 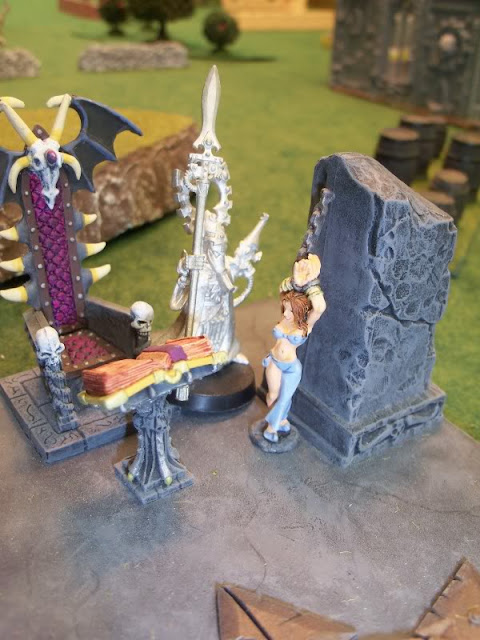