I finished painting up a unit of Wargames Factory skeletons. I gave most of them some old Games Workshop coffin lid shields that I've had sitting around a long time. I also used some left-over weapons from the Mantic skeletons, and bunch of shields from other things. The idea with this unit was to have them look like recently raised skeletons, so they haven't yet been equipped like the rest of the army. So, many of them just grabbed the lid from their own coffin as a shield and picked up whatever weapon they could find. I can use them as extras in a Warhammer game for when I raise more skeletons in any of my other units than I have miniatures for, which is why some have spears and some have swords. Or I can band them all together into a unit of disorganized-looking newly raised skeletons.

Here are some pictures of the completed unit. Click on the pictures to see them full sized. 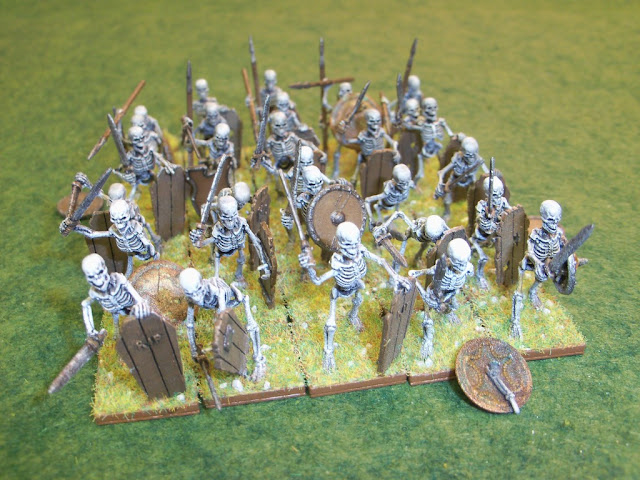 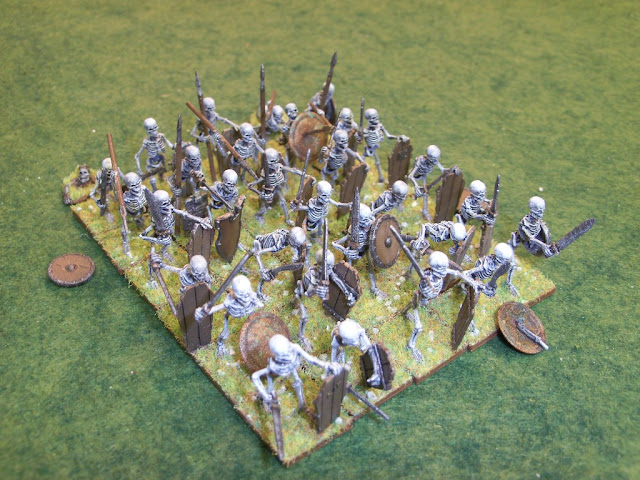 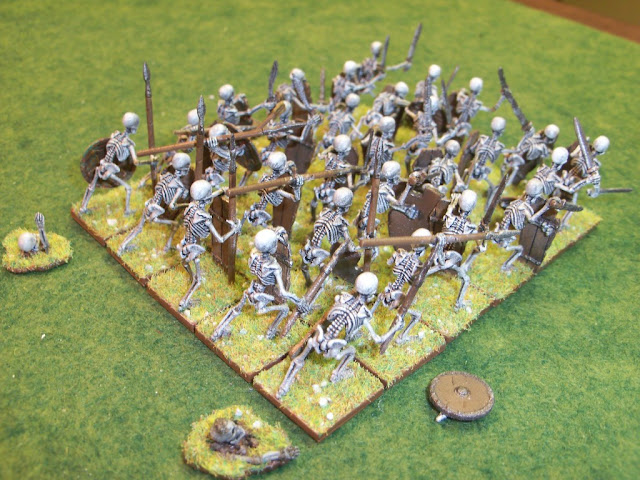 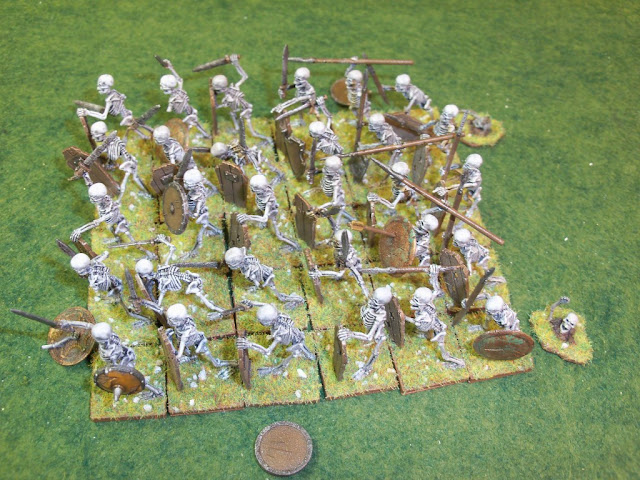 The Wargames Factory skeleton miniatures are nice looking, well proportioned, and very customizable. However, there were some issues I had with them. First of all, as you can probably tell from the pictures, they are very fragile. Just setting them up for the pictures, I broke several of their shield arms off. The arms are extremely thin, and attaching a big heavy shield to them makes them easy to break. That's why I tried to have as many shields as possible touching the ground to give extra support, which worked out well for the coffin lid shields.

Aside from the small, delicate pieces, there were some other downsides. I found some of the arm pieces to have a lot of flash on them, and were difficult to clean because of how fragile they are. When putting them together, I found it hard to attach the arms because there is really no shoulder socket to glue the end of the arm into, so there was no place that had enough surface area for the glue to hold well.

As mentioned, because of how many different pieces there are, you can really customize the pose of the skeletons. However, I thought they could have done better here. While there are a lot of right arms included, the box of 30 skeletons only comes with exactly 30 left arms, so you have no real options for which ones you want to use. So you have to have six of you skeletons pointing, for example. And if you break any of those delicate left arms, you have no spares to replace it with. This could have been an easy problem to fix, since it looks like there is plenty of room on the arm sprue for two or maybe three more arm options.

Another thing that is a downside, especially if you are making ranked up units, is that one third of the bodies (there are three varieties of body) are leaning way forward. Having a few like that in a unit may be okay, and it would be okay if these were for some skirmish game where they didn't need to rank up, but it is pretty annoying to have 1/3 of a unit lean way forward like that. Also limiting the variety is the fact that two of the three leg variety options are very similar to each other.

So, I think if you wanted to spend a lot of time customizing poses, or wanted to assemble a few of these for skirmish gaming, these could be pretty nice. But for putting together big units, while they do look good, these aren't the best option due to the time it takes to assemble them and how fragile they are.