First, some caveats. Obviously playing both sides is not really the same experience as playing against an opponent. Also, I decided not to use any of the "special" terrain rules, and since everything is based consistently I just measured from the bases instead of the models for everything. For simplicity, I didn't use any standards or musicians in my units, and I didn't use any of the Formations. I also needed to decide what to do about the raise spells. I was considering the idea that in order to raise a type of undead, you have to already be using that warscroll in your army, to prevent summoning for example a Zombie Dragon, which would be overpowering in such a small game. In the end, I decided that only models that were part of the army list to begin with, but had been either kept in reserve or removed as casualties, could be summoned. 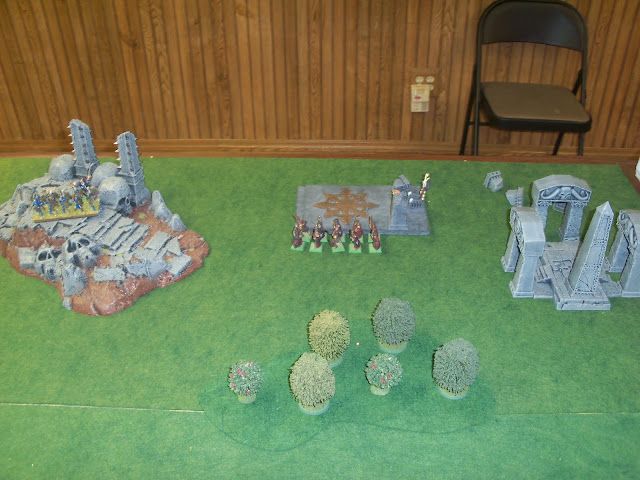 The Vampire Counts deployment. The Necromancer starts in one corner on the ruined skull temple behind 10 skeletons. The Grave Guard start in the center. The other 10 skeletons start in reserve to be summoned later. 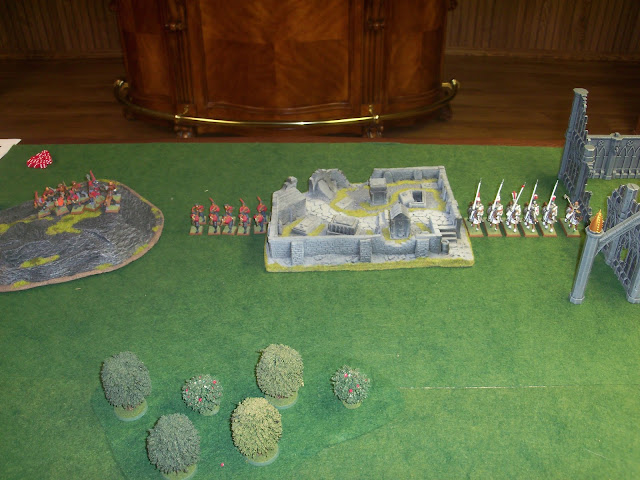 The Militia and Handgunners deploy to cover each other, with the Militia on the hill in the corner. On the left of the Empire line are the Knights and mounted Priest. 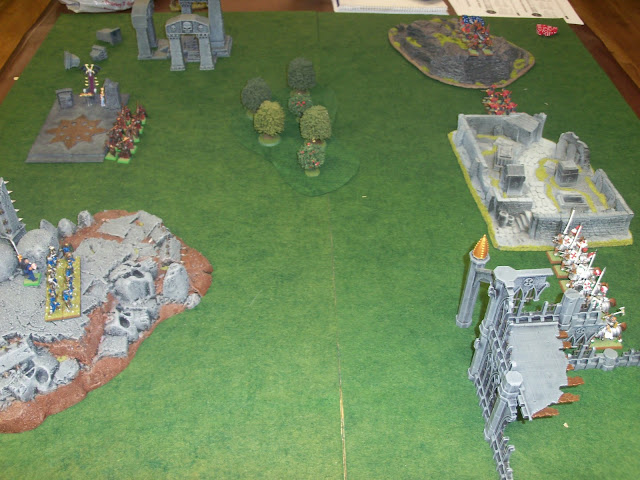 The battlefield after deployment. The Vampire Counts finished first because they held a unit in reserve, and chose to take the first turn. 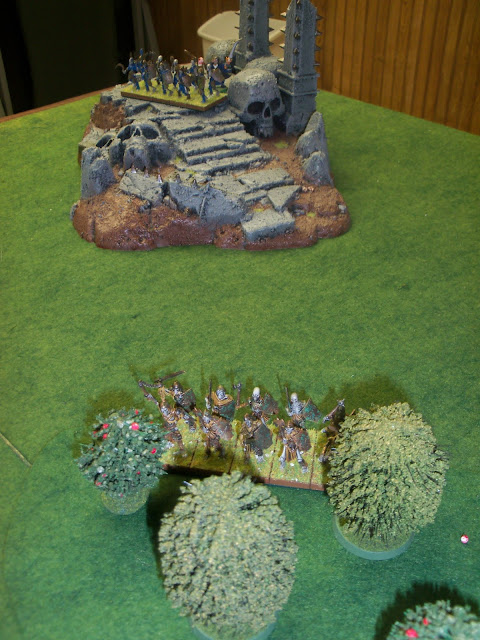 The Necromancer immediately summons his reserve unit of Skeletons into the woods in the center of the table. 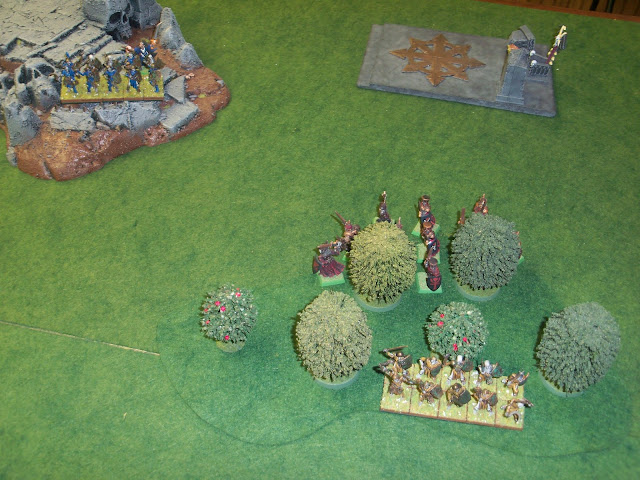 All of the Vampire Counts units run, taking up positions in cover (I missed that the summoned unit should not have been able to move this turn). Some, but not all, of the Grave Guard reach the cover of the woods. 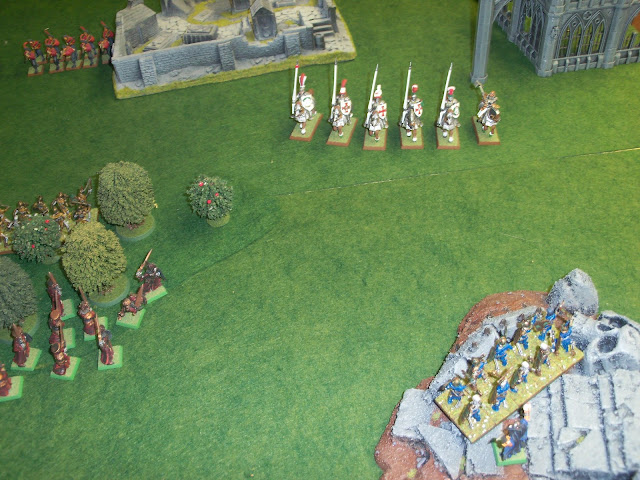 The Knights and Priest run forward to take the fight to the enemy. 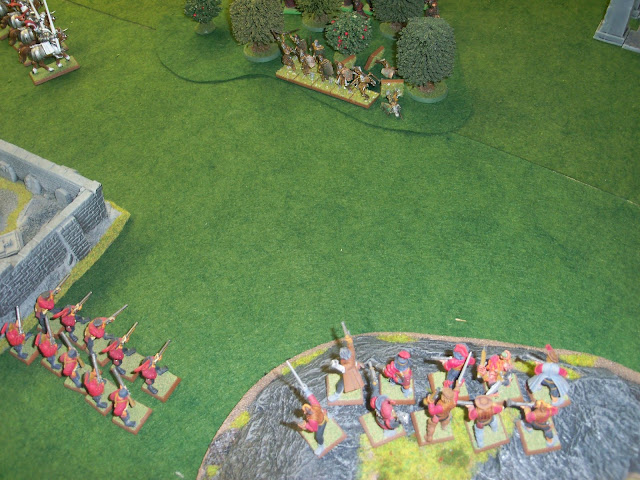 The Militia advance but remain on the hill, while the Handgunners stay still (giving them +1 to hit with their shots). Both units open fire and take down three of the skeletons in the woods. 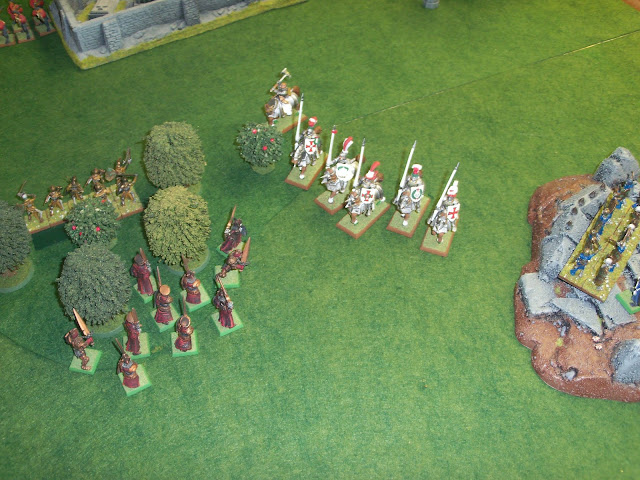 On Turn 2, the Empire win the roll off and choose to go first. In the Command phase, the Priest uses the Shield of Faith prayer (extra 6+ save against wounds) and his Inspiring Presence command ability (no need to take Battleshock tests) on the Knights. The Knights use their "Duty and Honor" ability, allowing them to re-roll hits. All of these apply until the next Empire hero phase (this duration can vary, since there is a roll off to determine the order each army will act in each turn). The Knights then moved forward, preparing to charge the Grave Guard. 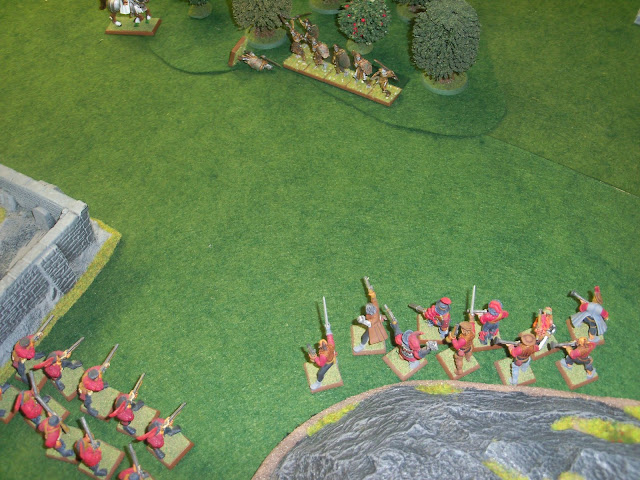 The Militia advance to the foot of the hill. The Handgunners again remain stationary. Both units fire on the skeletons again, but only destroy one of them, thanks to a combination of bad shooting and the armor save bonus of the woods. 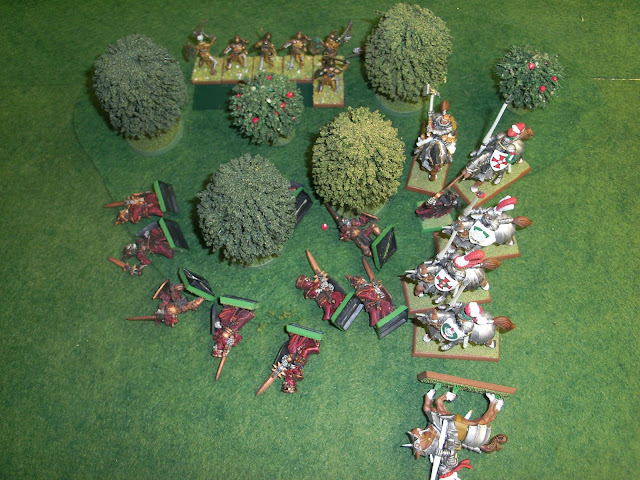 The Knights and Priest charge the Grave Guard. They have re-rolls to hit from the Duty and Honor ability, and they get +1 to wound rolls and Damage on the charge with their lances. They kill 4 of the Grave Guard, and their horses take down another 2. The remaining Grave Guard kill one of the Knights (which have 2 wounds each), before the Warrior Priest kills another Grave Guard. Finally, 2 more Grave Guard are lost to Battleshock, leaving just one remaining. 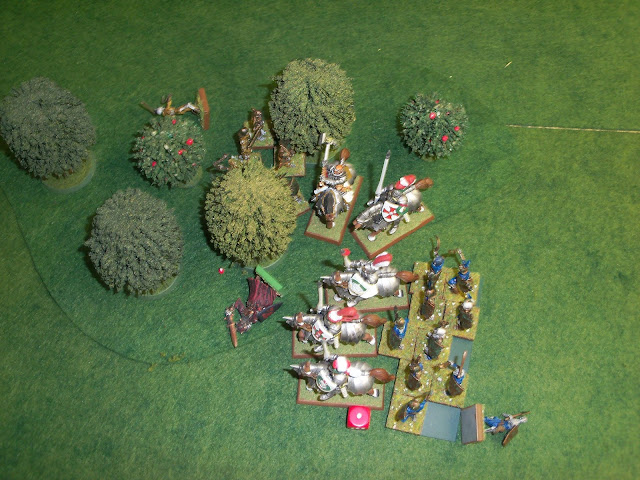 On the Vampire Counts turn, the Necromancer uses Inspiring Presence on the unit of Skeletons in blue, but fails to cast Dance Macabre on them. The Skeletons successfully charge the Knights, but only do a single wound. In turn the Knights do nothing (even with their re-rolls to hit for Duty and Honor), though their horses kill the last Grave Guard and one of the Skeletons. (It seems we are back in the days when horses did way more than in combat than their riders). The unit of Skeletons in yellow, being within 3" of the priest, choose to move up and attack, but can't wound him. The Priest then smashes one of them in return. 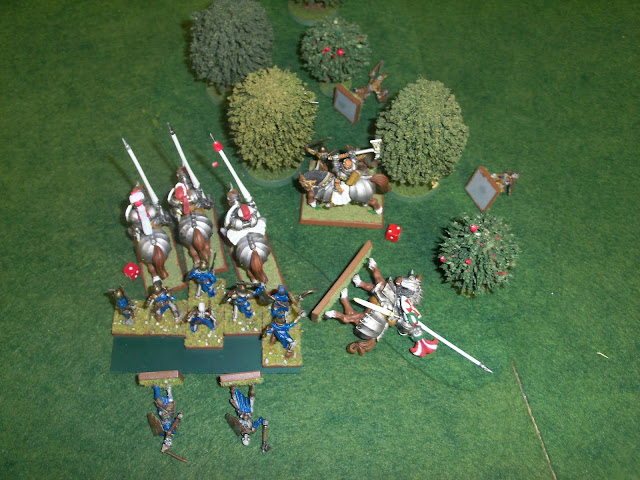 For Turn 3, Vampire Counts win the roll-off and go first. The Necromancer uses Inspiring Presence on the Skeletons in blue (fairly pointless since with their Bravery of 10, they could only suffer Battleshock if they took 5 or more casualties in a turn). The Necromancer then casts a spell that would raise back his unit of 10 Grave Guard (he rolled 10 on the casting roll to raise twice as many). However, the Priest's immense faith in Sigmar prevented the spell from taking effect (rolled 11 to unbind the spell). The combat in the woods continues. The Skeletons in blue finish off a Knight (I kept forgetting about their shields, which are different from how the undead shields work, letting them re-roll 1's on armor save rolls). The horses kill 2 more skeletons. Again the Knights do nothing, even with their Duty and Honor ability still in effect. The yellow-clad Skeletons wounds the Priest twice. In return he uses his Prophet of Sigmar ability to double his attacks, and smashes apart 3 of the skeletons. 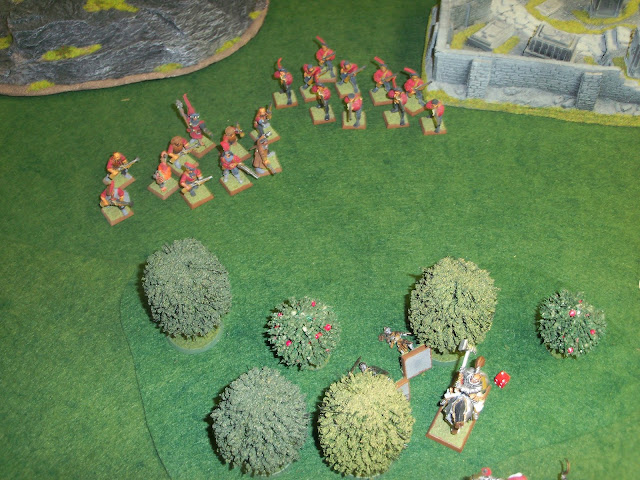 The Handgunners and Militia advance towards the woods and open fire on the Skeletons fighting the Priest, killing them both. 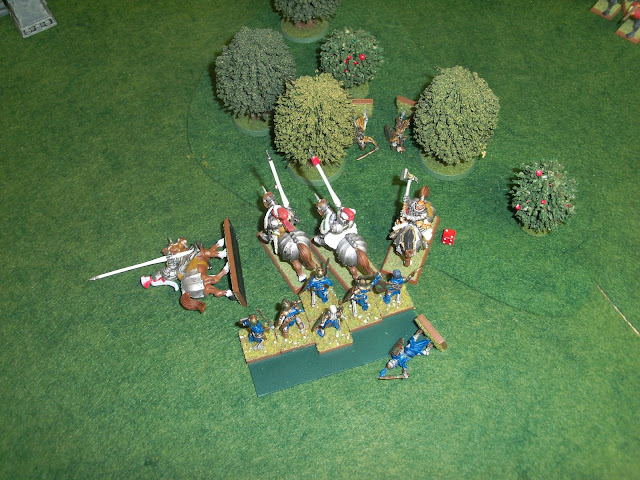 The Priest uses his Soulfire prayer to destroy one of the remaining Skeletons. The attacks from the Knights and Priest do nothing in combat, while the Skeletons manage to finish off the wounded Knight. The Inspiring Presence ability of the Priest means the Knights don't have to roll for Battleshock (Battleshock had very little impact in this game). 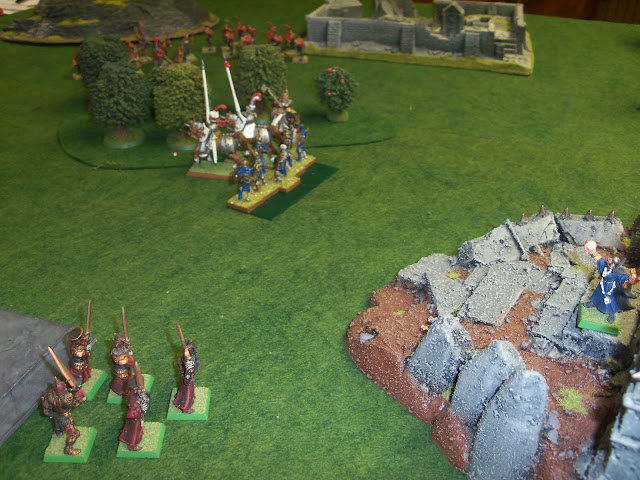 On Turn 4, the Vampire Counts win the roll-off and chose to go first. The Necromancer raises 5 Grave Guard, and this time the Priest fails to unbind the spell. The newly raised Grave Guard attempt to charge the Knights, but fail. 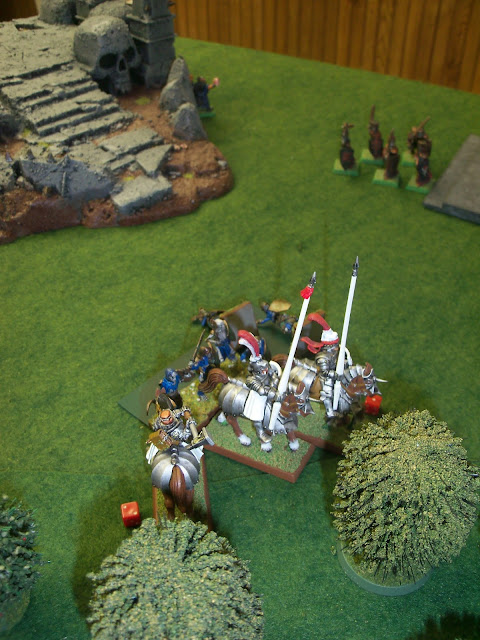 The Necromancer absconds to a less conspicuous location behind the ruined skull temple. In combat, the blue Skeletons wound one Knight, then the Priest and a Knight's horse each skill another of the Skeletons. 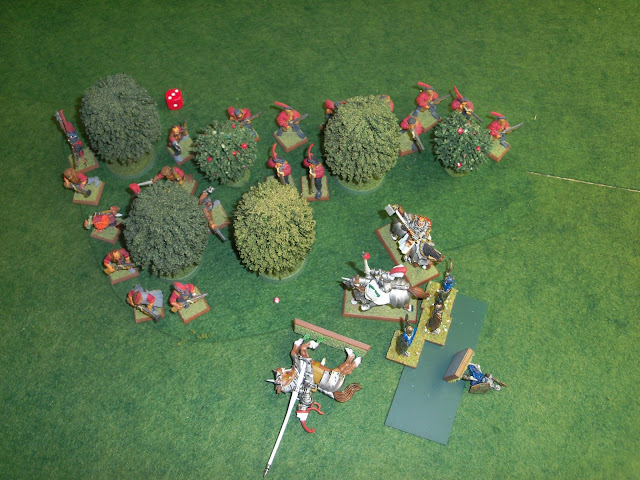 On the Empire turn, the Handgunners and Militia both run up into the cover of the woods. In combat, a horse takes down another Skeleton and the Skeletons finish off the wounded Knight. 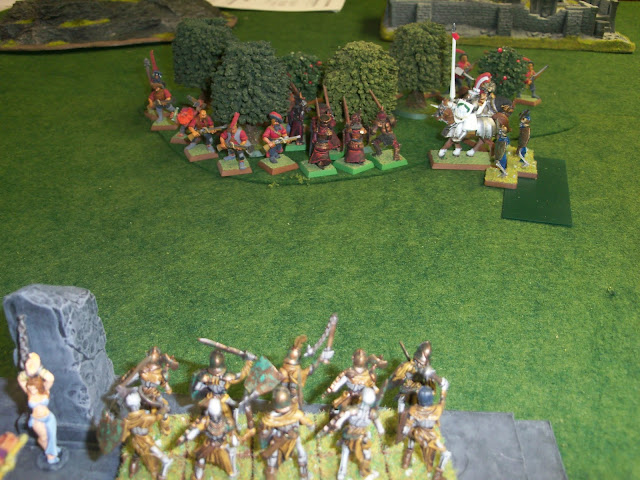 On Turn 5, the Vampire Counts again win the roll-off and choose to go first. The Necromancer successfully summons a unit of 10 skeletons. The Grave Guard move up and charge the Militia in the woods. 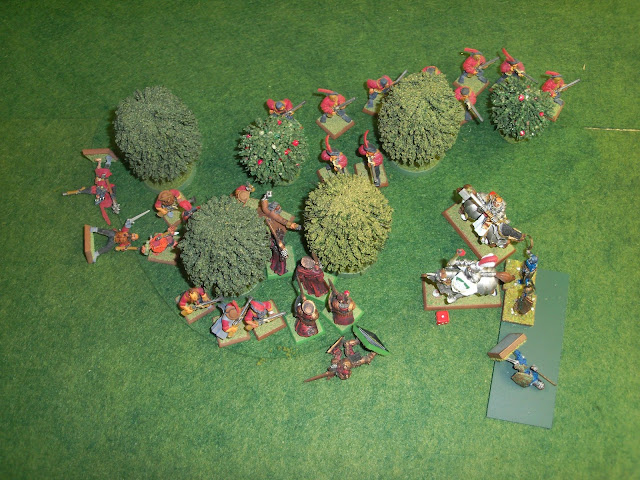 The Grave Guard kill 2 of the Militia (I was expecting them to do better, but the Militia did get +1 armor save for being in the terrain). Because of the intervening trees, the Militia can only get a few models in range of the Grave Guard (I could have gotten one or two more by moving out of the forest, but chose to keep them all in terrain for the +1 armor save). They take down one of the Grave Guard with their attacks. (So, even without special terrain rules, this forest actually ended up having a big effect on movement speed and how many models were able to fight). In the other ongoing combat, one Skeleton is killed, while another Knight is wounded. I chose not to pile into the combat with the Handgunners (which are within 3" of the Grave Guard). 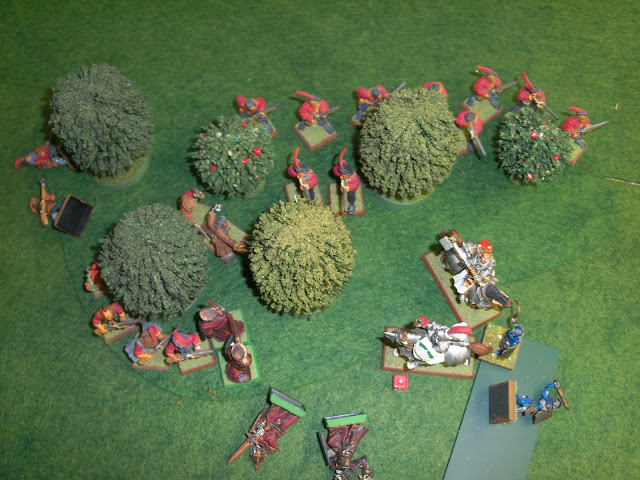 On the Empire turn the Priest uses Inspiring Presence to make the Militia immune to Battleshock, and kills another Skeleton with Soulfire. The Handgunners stay put and fire into the Grave Guard (though only a few can see because of the trees) and kill one of them. The Militia also shoot, but without effect. The Militia kill another Grave Guard in combat, while losing two of their own in return. Everyone else fails to do anything. 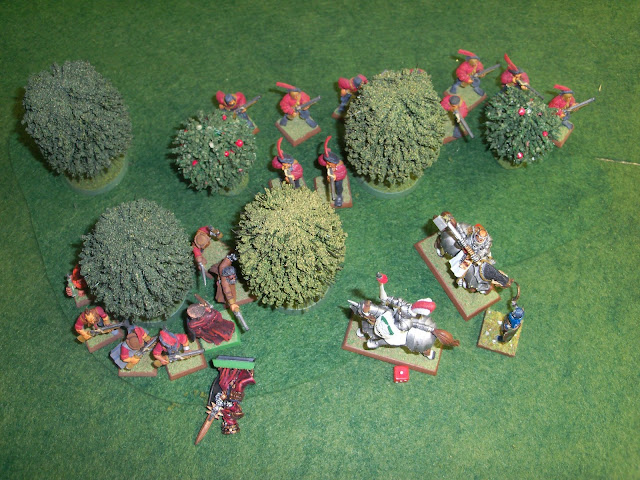 The Empire wins the roll-off on turn 6 and goes first. The Priest uses Inspiring Presence on the Militia, but fails to get off his prayer. The Militia and Handgunners all stay still and fire, most on the Grave Guard and a few on the lone Skeleton in blue, but they fail to cause any casualties. In combat, one Grave Guard is killed by the Militia. Nothing else happens. This is a bit of a problem when the units are small. When rolling only a few dice, and three different consecutive rolls needed to cause a wound (hit, wound, save), it is not uncommon to fail to do anything. In this instance, several turns of no wounds being caused at all making the whole game bog down with nothing happening. 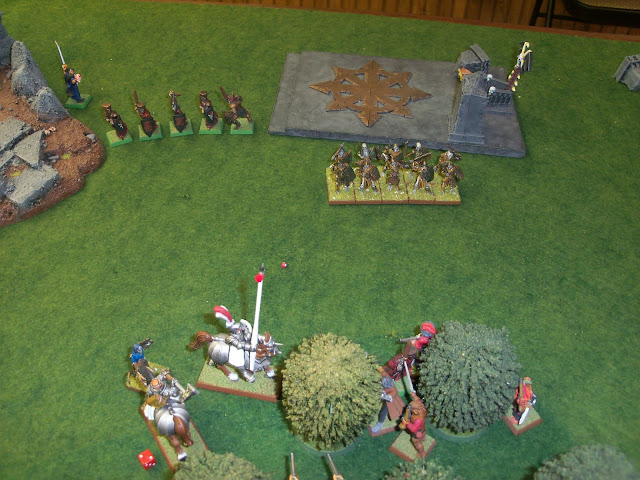 On the Vampire Counts turn, the Necromancer raises another unit of 5 Grave Guard to replace his losses. He also moved up a little to be closer to his newest unit of Skeletons (Skeletons within 18" of a Death Hero get +1 to hit). The newly re-raised Skeletons in yellow move toward the woods. 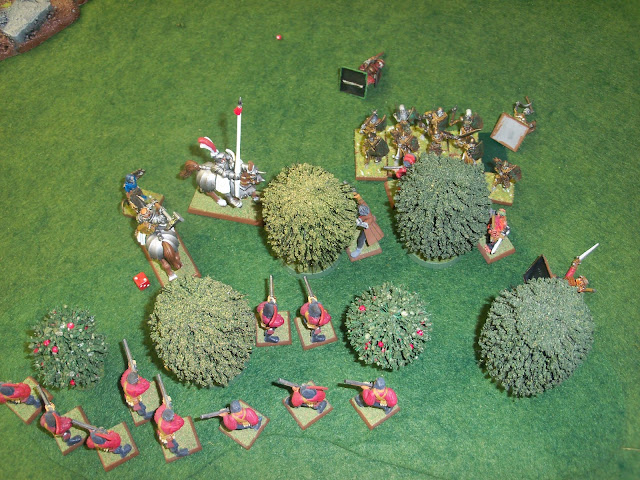 The Skeletons in yellow charge the Militia in the woods and kill one. The Militia in turn kill the last Grave Guard in the unit they are fighting, and one of the new Skeletons. At this point, I decided to stop playing, as nothing really interesting was happening or seemed likely to happen. 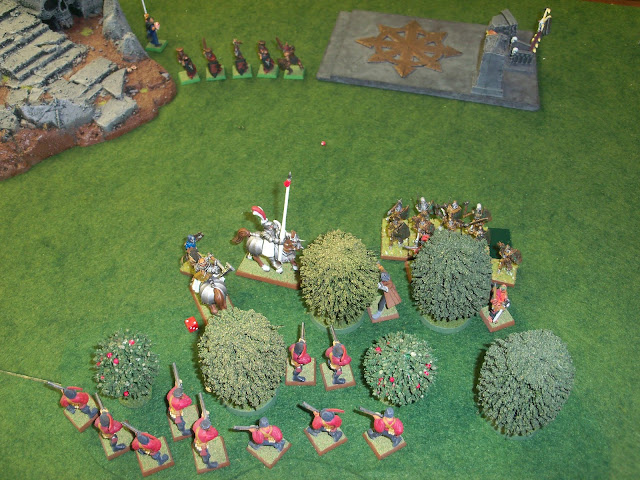 Here is what is left at the end of 6 turns. Everything is bogged down in a combat in the forest.
Posted by Craig Welter at 2:13 PM