I ended up going back to finish up the test game write-up I began in this post. See below for the thrilling conclusion! 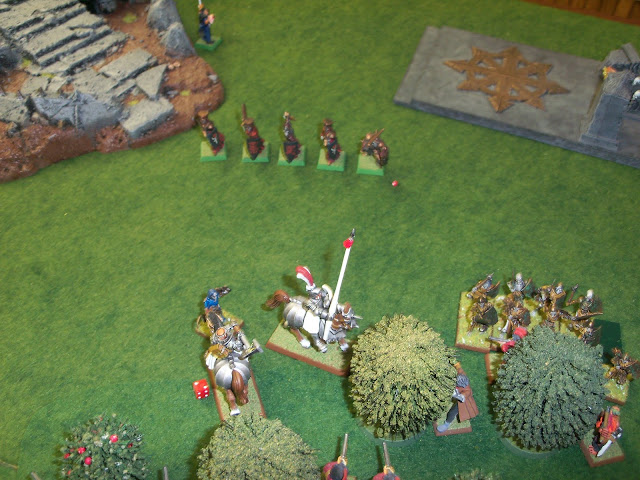 On Turn 7, the Vampire Counts win the roll-off and choose to go first. The Necromancer casts Danse Macabre on the Grave Guard (which would allow them to pile in and fight twice in the combat phase). The Grave Guard move toward the Knight and Warrior Priest, but fail their charge roll. 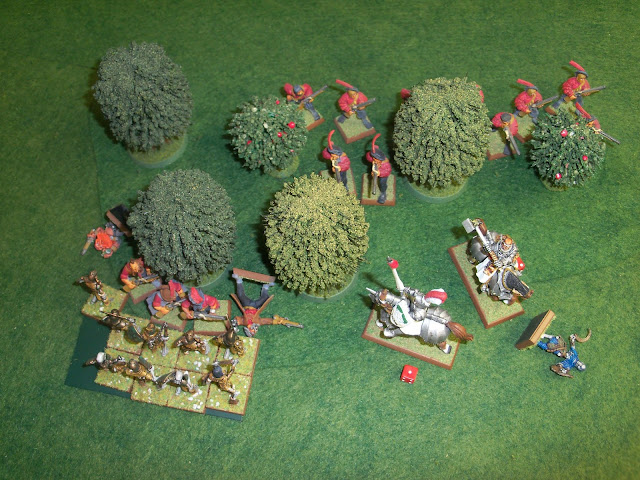 In the combat phase, the Skeletons in yellow kill two more of the Militia. The Priest does nothing again, but the Knight manages to finish off the last Skeleton in blue. The remaining Militia cause no casualties. 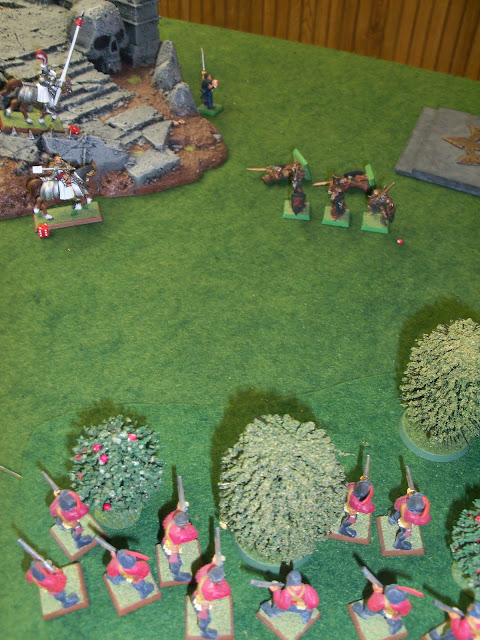 In the Empire half of the turn, the Priest uses Inspiring Presence on the Militia, and casts Shield of Faith on himself. No longer locked in combat, the Priest moves up toward the Grave Guard, next to the skull ruins. The Knight breaks from combat with the Skeletons in yellow and runs up onto the ruins. The Handgunners remain stationary and open fire, taking down two of the Grave Guard. 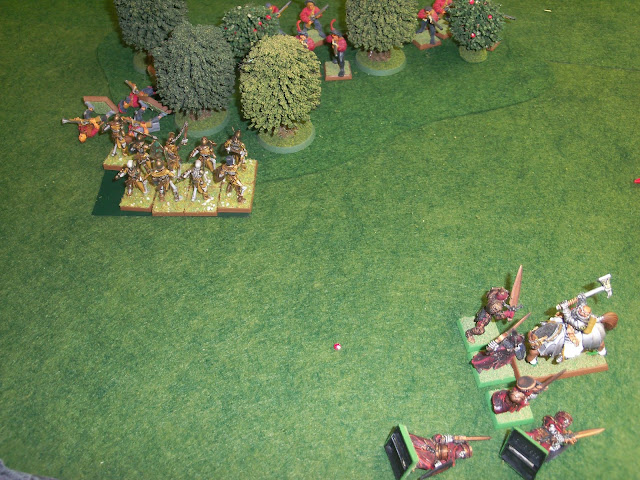 The Priest charges the Grave Guard, but fails to harm any of them. They wound him in return. Meanwhile, the Skeletons finish off the Militia before they have a chance to attack. 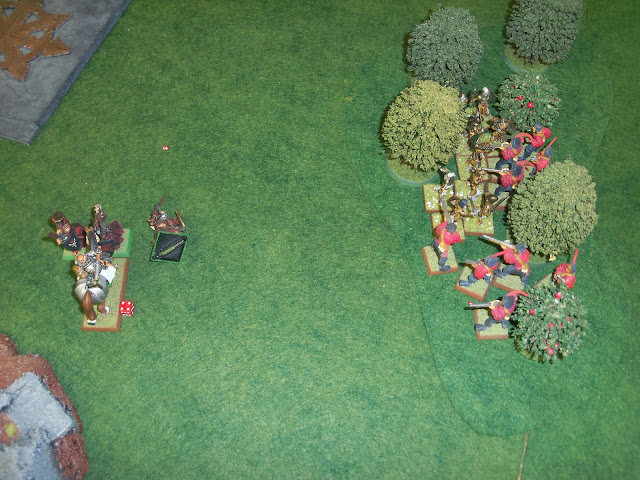 The Vampire Counts go first again in Turn 8. The Necromancer tries to summon more Grave Guard, but the Priest unbinds the spell. The Skeletons move into the woods and charge the Handgunners, but fail to cause any casualties. The Handgunners return the favor. The Priest takes down one of the Grave Guard, and takes another wound in return. 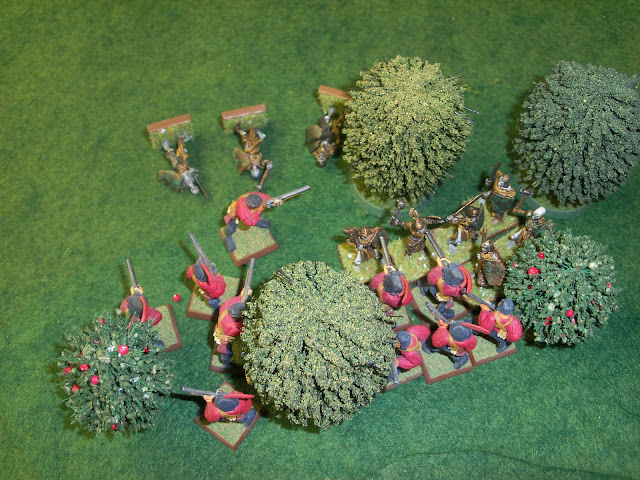 In the Empire turn, the Handgunners open fire at point blank range and send three Skeletons back to their graves. 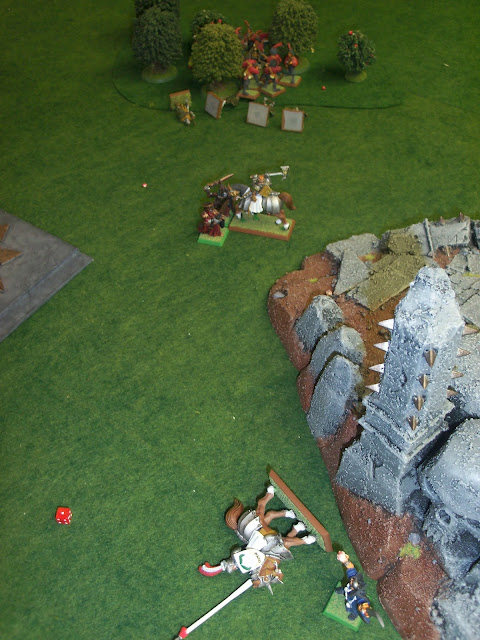 The Priest uses Inspiring Presence on the Handgunners, making them immune to Battleshock (which wasn't a factor at all in this game). He fails his prayer attempt. The Knight charges the Necromancer, and does nothing. The Necromancer nonchalantly kills the Knight. The Priest does nothing to the Grave Guard and they give him another wound. The Skeletons do no wounds on the Handgunners, who manage to drag down one more Skeleton.

In general, normal models don't do much. The knight has one attack, that needs 4+ to hit and 4+ to wound. So he only has a 25% chance of even forcing an armor save, which will negate maybe 1/3 of them. The horse, being twice as deadly as a trained knight (naturally) has 2 attacks, also 4+ to hit and wound. But even with those, this model averages causing 3/4 of a wound, BEFORE armor saves. This was a problem in Warhammer Fantasy also, but in a more large skirmish sized game it is more obvious. To do any real damage, I think you need either 1) a huge unit, 2) some special abilities being applied, like bonuses and re-rolls to hit or wound, or 3) elite units (including bit monsters and characters). Regular guys just won't usually do much, unless you roll really lucky. 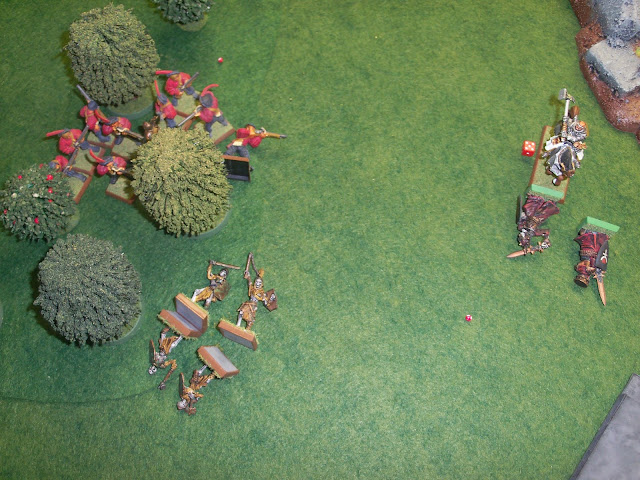 On turn 9, the Empire finally wins a roll off, and chooses to go first. Priest uses Inspiring Presence on the Handgunners, and his Soulfire prayer kills one of the Grave Guard. In the combat phase, his horse takes care of the last Grave Guard. The Handgunners shoot down two of the Skeletons, and destroy another two in combat, leaving one remaining. In the process another Handgunner is killed by the Skeletons. 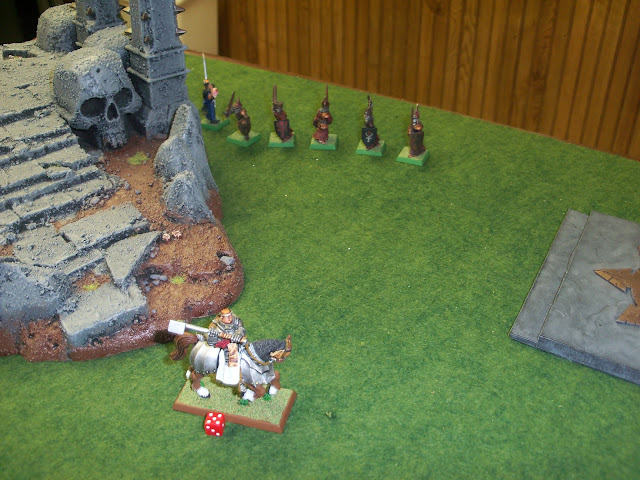 In the Vampire Counts turn, the Necromancer successfully summons another 5 Grave Guard. The one remaining Skeleton and the Handgunners do nothing in combat. 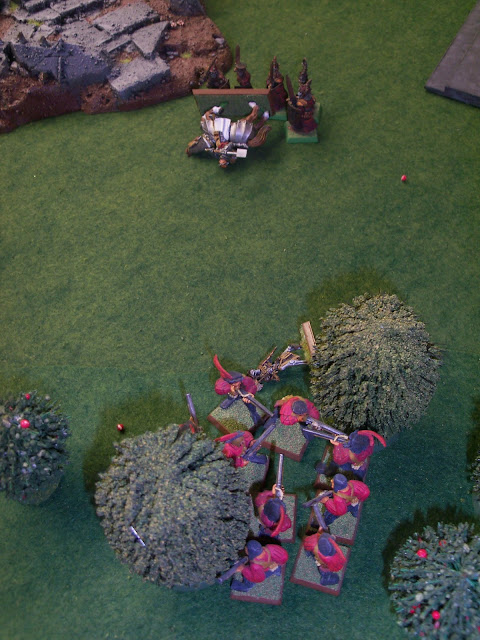 The Vampire Counts go first again on Turn 10. The Necromancer attempts more summoning (why do anything else?) but his attempt is unbound by the Priest. The Grave Guard charge the priest and kill him, while the Handgunners just manage to destroy the last Skeleton. 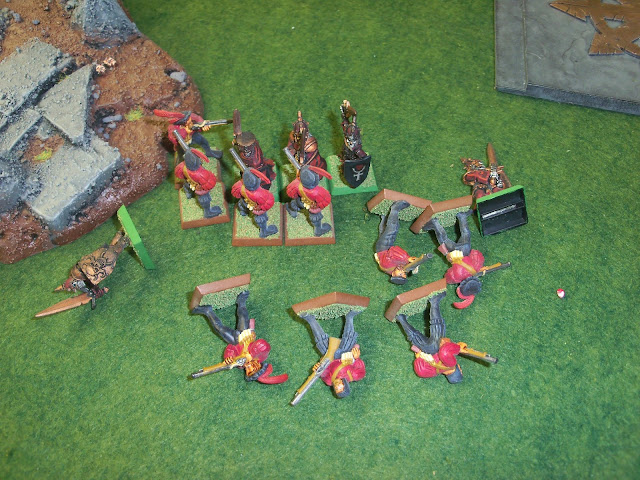 And that was that. I didn't bother playing out the last turn, as the four remaining Handgunners had no hope of killing the Necromancer, and there was nobody left to unbind his summoning spells. The Necromancer lost his entire army, multiple times over, but still managed to stay alive.
Posted by Craig Welter at 1:40 PM