In Kislev, a seer has foretold the coming of another great Orc horde, one to rival that of Azhag the Slaughterer. The prophecy states that in an Orc lair near Mount Gunbad an Orc Warboss has come to power. Unless he is stopped soon, he may gather the tribes and strike at Kislev, eventually laying waste to all the lands east of the Great Ocean. Although there is some doubt about the accuracy of the prophecy a reward is being paid for every Orc Warboss head taken to Kislev, and great treasures are promised to those who bring the head the seer saw in her dreams.

The Warriors have heard rumours of a fight between two Orc factions that has brought about a new Warboss called Gorgut. They have become convinced that he is the one in the prophecy and they immediately set out to find Gorgut and bring back his head!

As a result of their last adventure, the party discovered that orcs and goblins were massing for an invasion of the Old World. In reality, the Chaos Warrior may have lied about what he saw in the magical waters of the fountain of fate in order to conceal a potential invasion from the chaos wastes. In any case, the rumor of an orc invasion has spread throughout the Empire and Kislev, and suddenly many seers are having visions of the imminent orc threat. The adventurers, determined to do their part to protect the Old World from the imagined invasion, head out in search of some orc heads they can bring Kislev for the promised reward money. 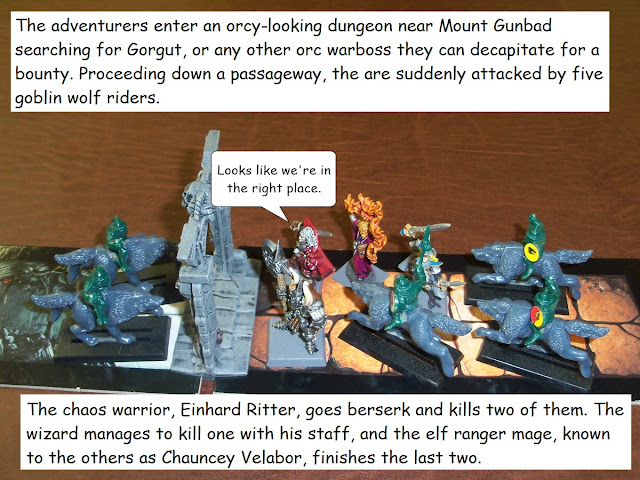 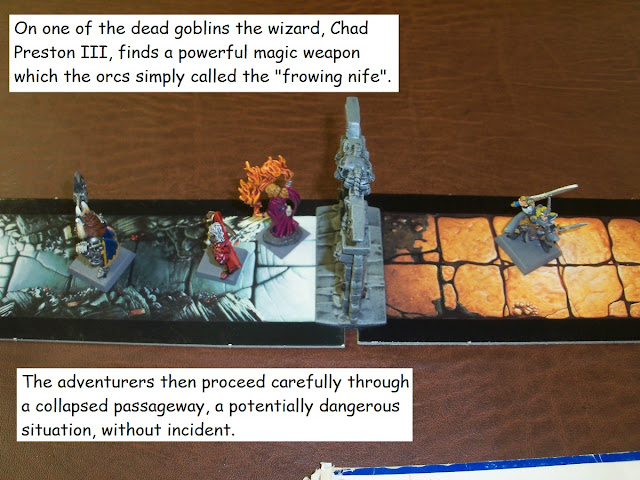 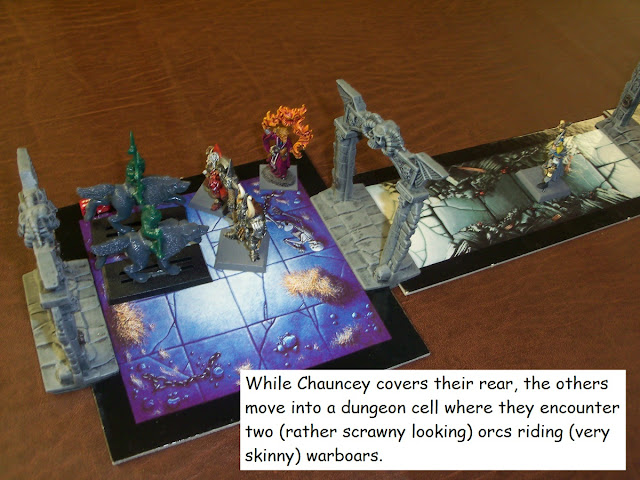 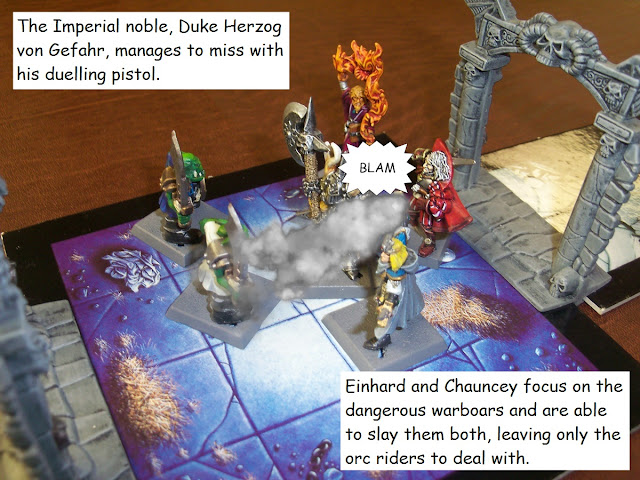 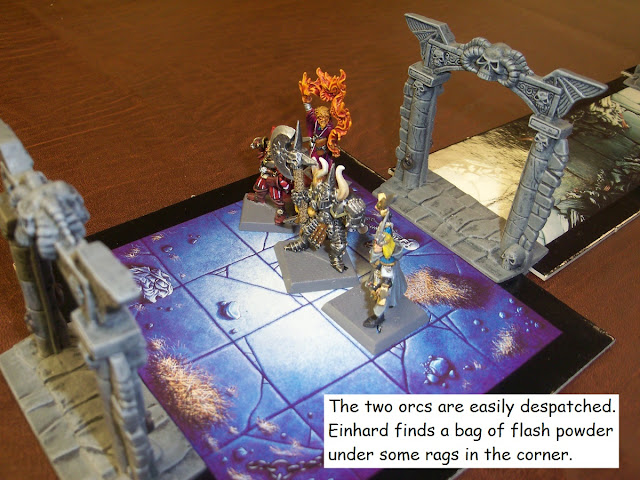 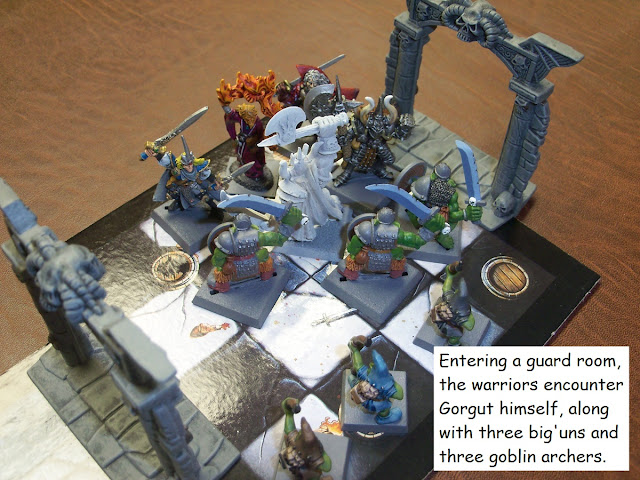 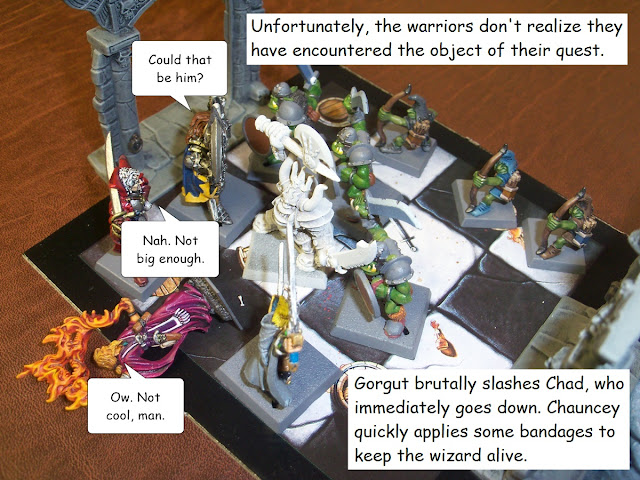 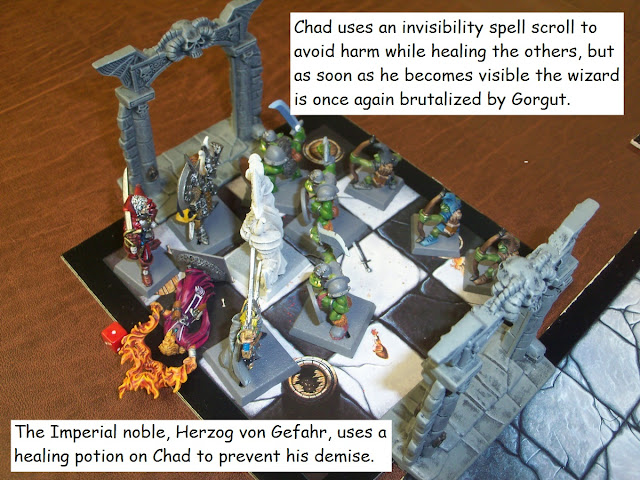 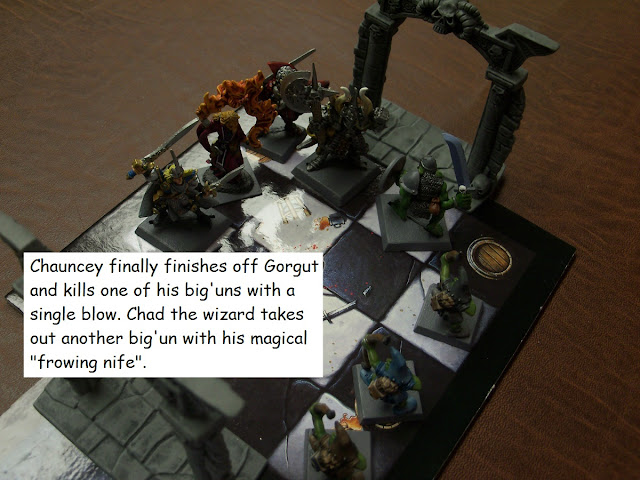 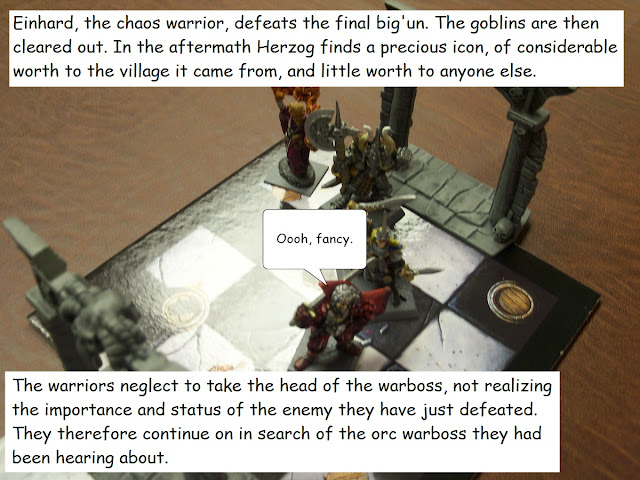 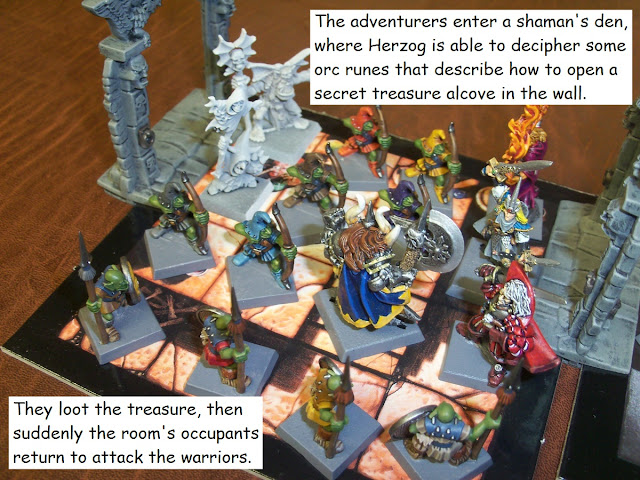 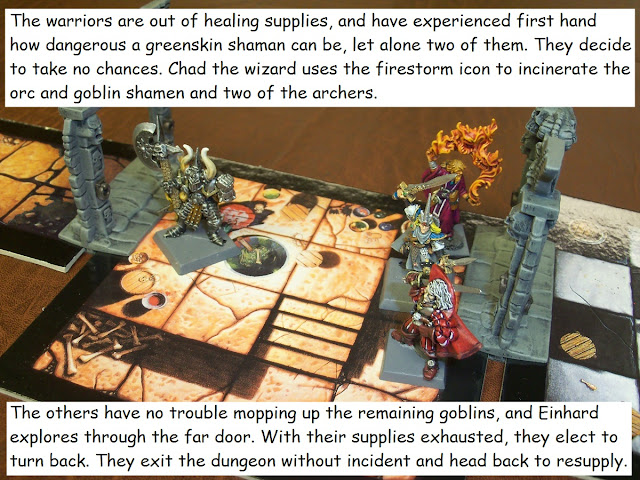 The party sets out for the nearest village to resupply, but they have no idea where they are going. After doubling back and starting over several times, they end up passing through lands ravaged by famine. Most of the wealthy adventurers take pity on the starving locals and give them some money. Chauncey, the elf ranger, instead gives them a worthless trinket. Coming from an exotic elf noble, the country folk mistake the trinket for a valuable piece of elf craftsmanship. Touched by the haughty elf's kindness and generosity, the village elders gift Chauncey with their only valuable possession: a magical sword of sharpness.

The group continues on quickly, before the locals can realize their mistake. After many months of wandering, they eventually find their way to a town. The party's wizard, Chad Preston III, spends a week in training. He learns two new spells: Healing Hands and Pit of Despair. In addition, he becomes more resilient (4 more wounds) and increases his innate power store (6 more power, up to 12).

The other warriors mostly stock up on healing items, which they had been conspicuously lacking. They are then ready to head back into the dungeon to continue their search for the rumored orc warboss gathering followers near Mount Gunbad.
Posted by Craig Welter at 4:40 PM