I recently played a game of Frostgrave at my local gaming store. I don't own and haven't read the rules, so I was mostly relying on explanations from the people who had played before, along with looking things up in a copy of the book when needed. The game is simple enough to play with minimal explanation, though I'm sure we must have gotten some things wrong along the way, which may or may not have impacted my impression of the game. See below for a battle report and my thoughts on Frostgrave based on my introductory game. 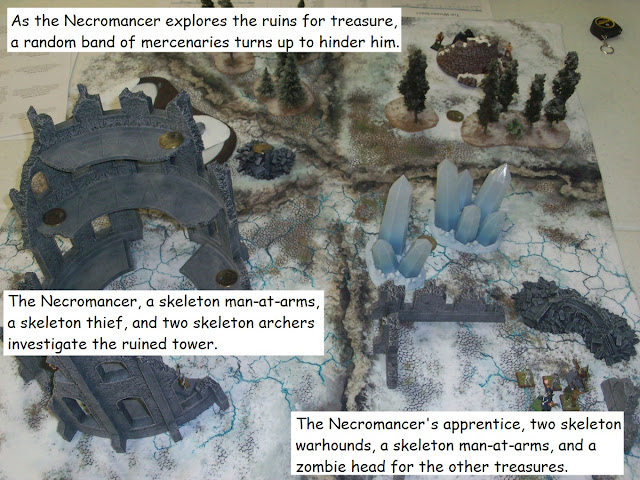 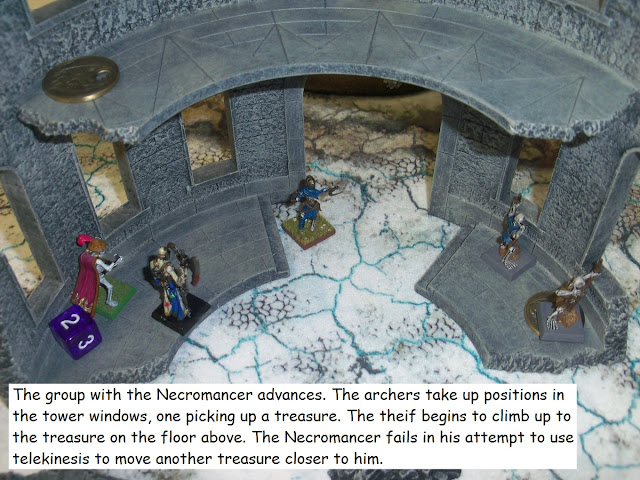 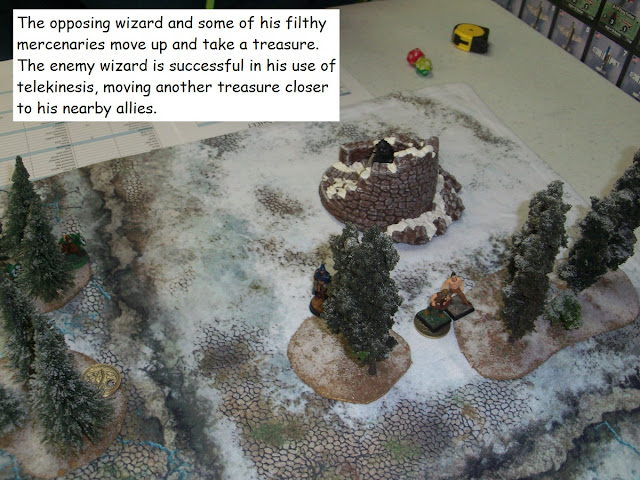 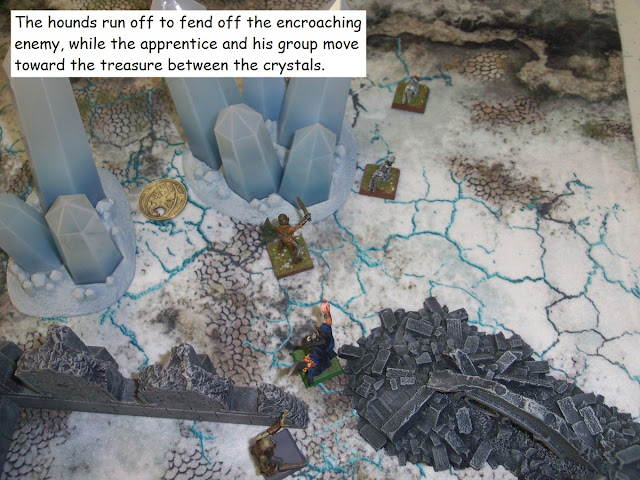 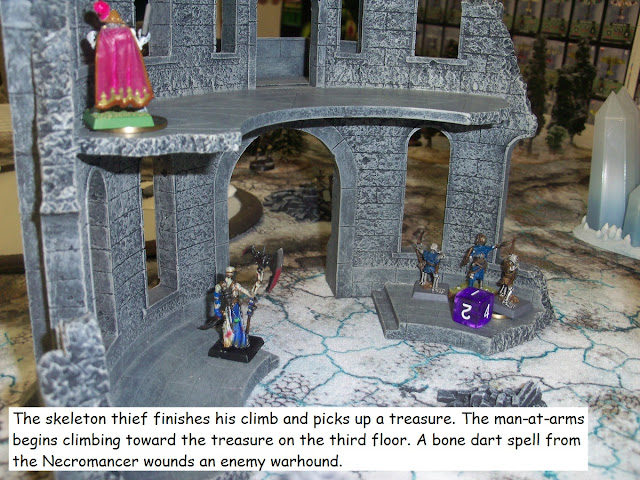 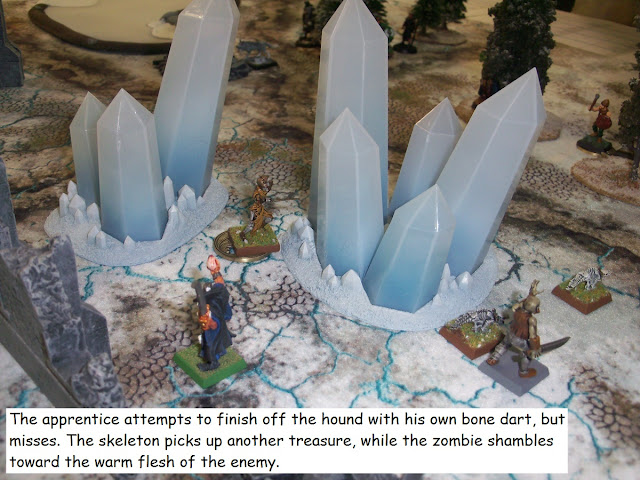 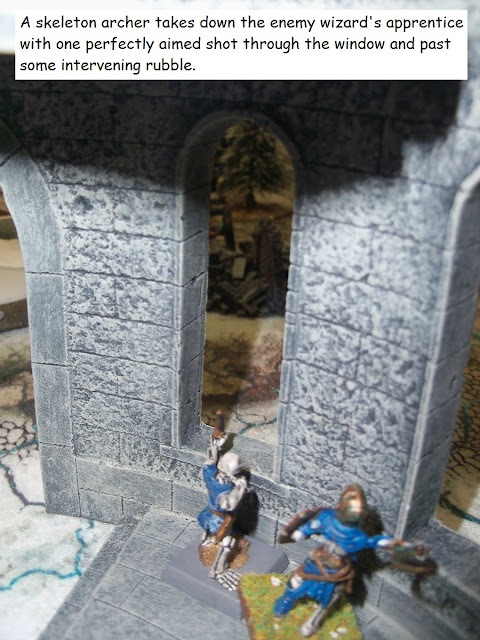 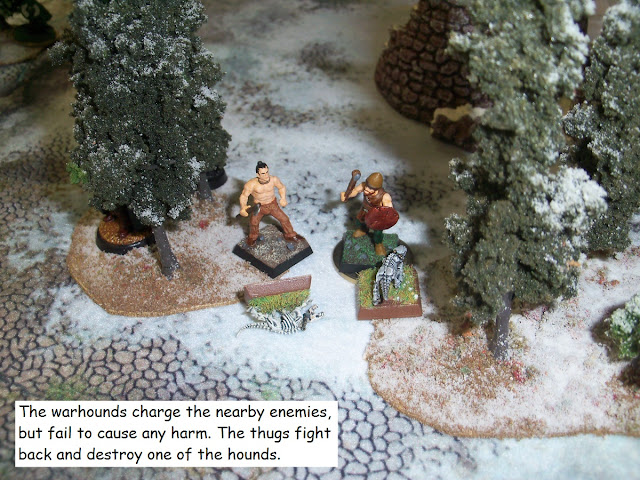 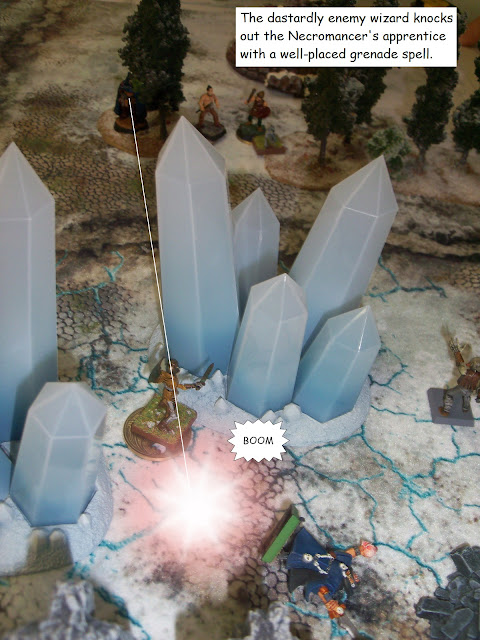 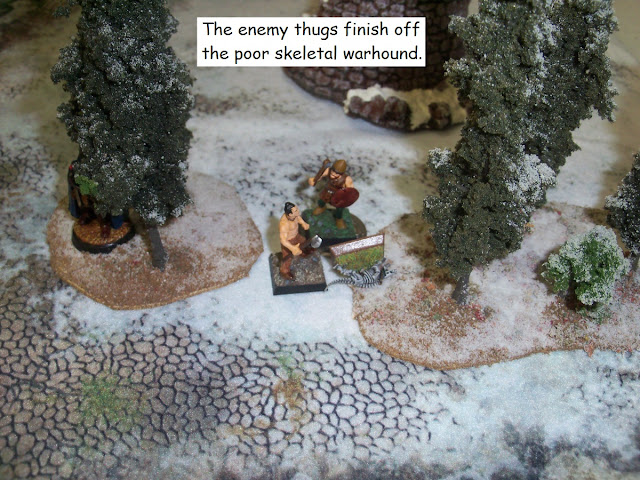 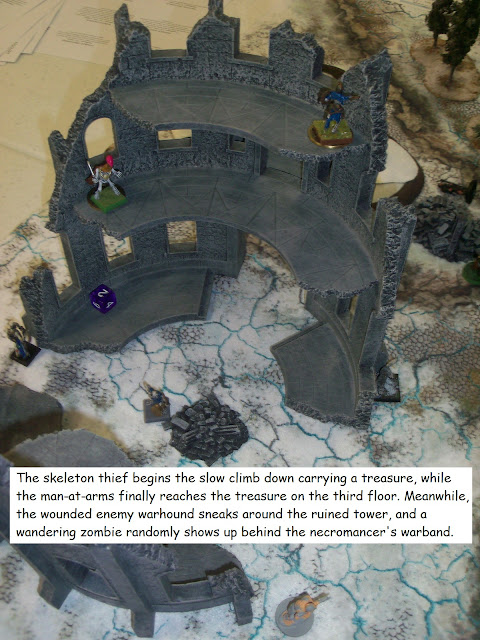 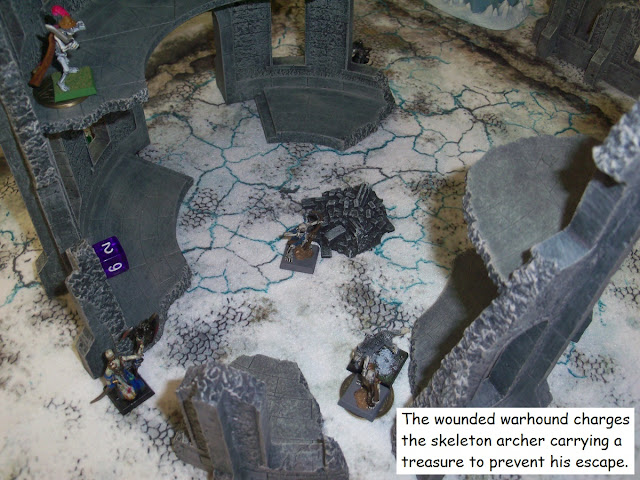 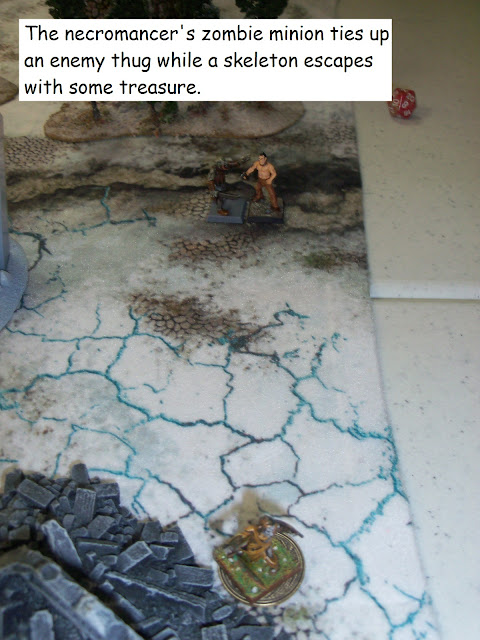 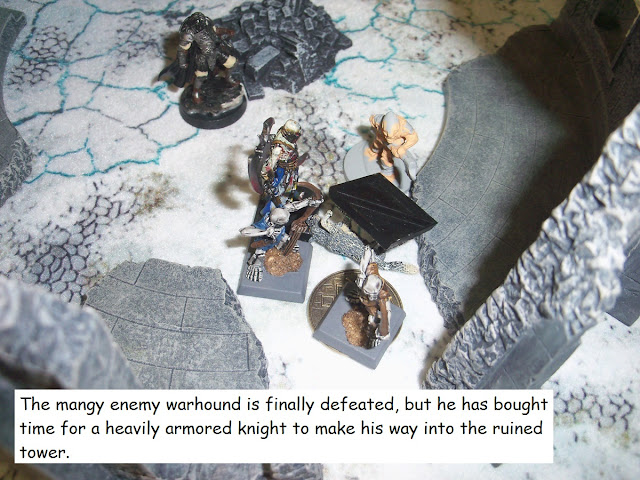 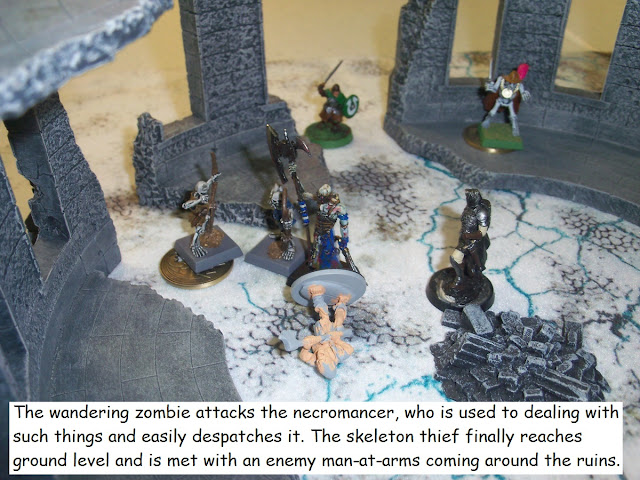 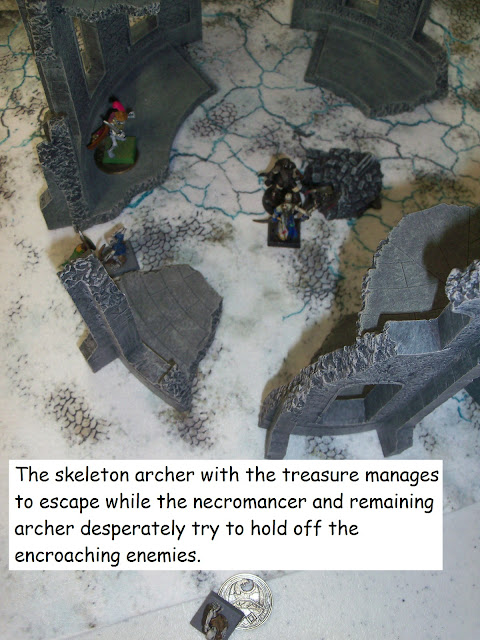 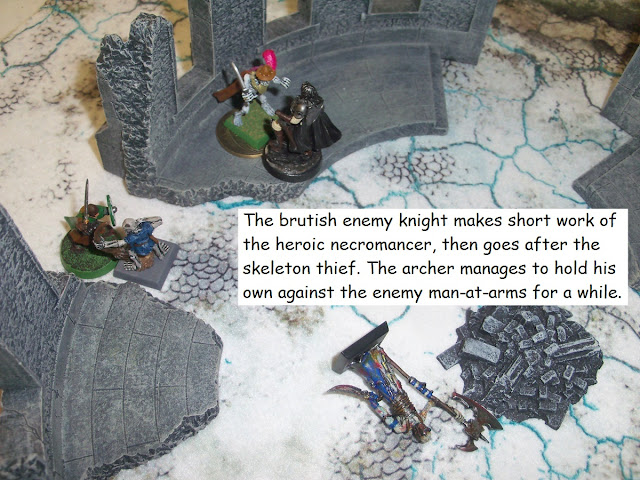 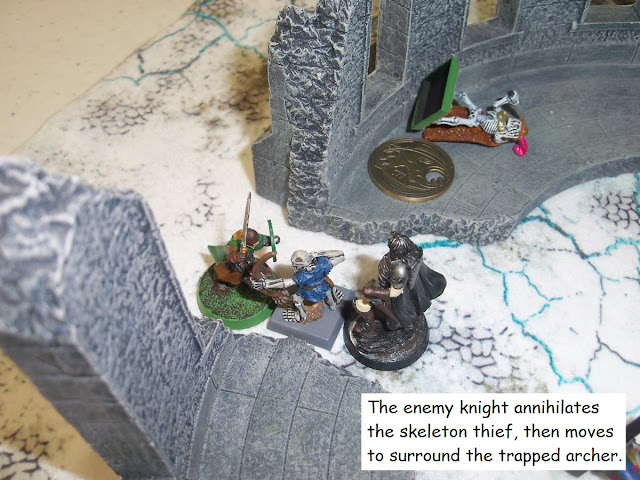 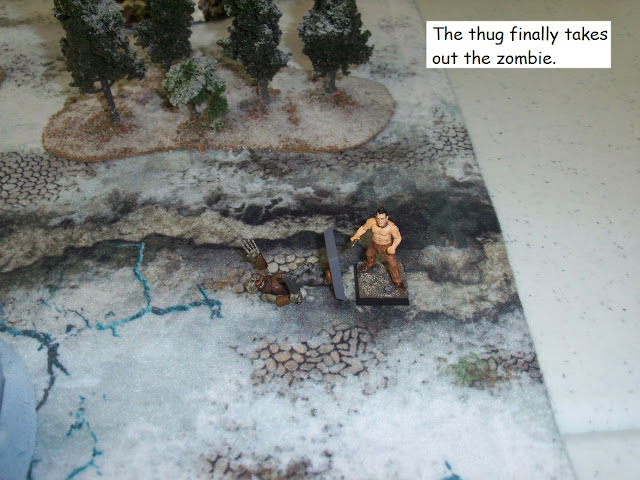 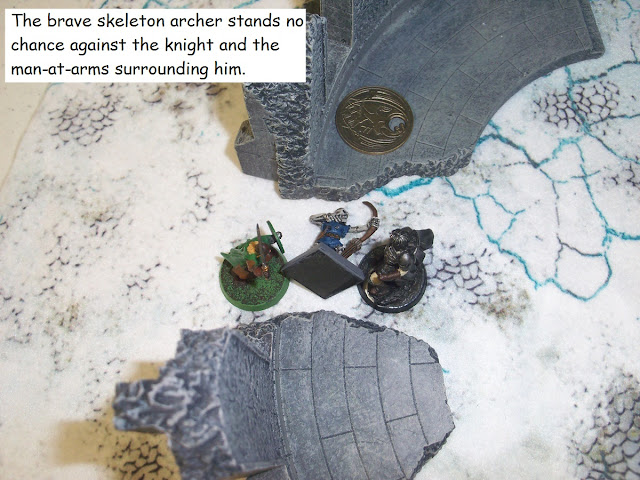 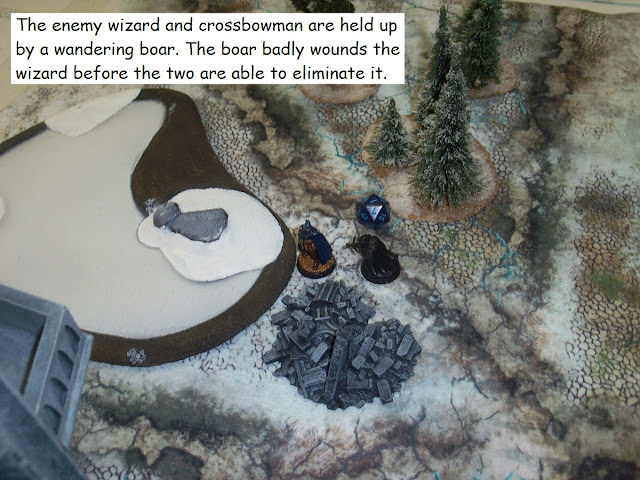 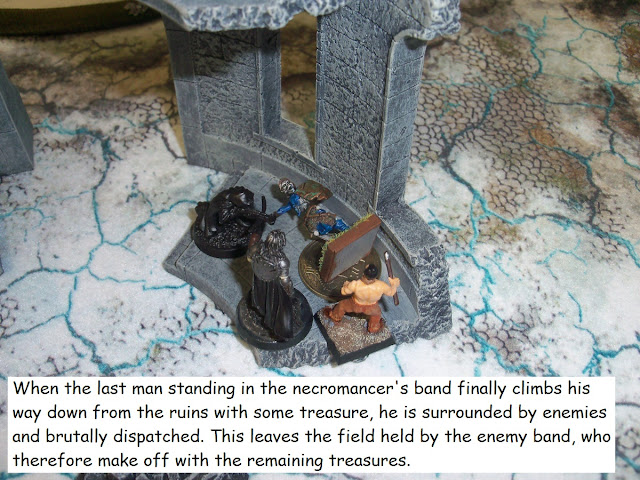 I didn't do any of the after game stuff, like rolling to see what my two treasures were, gaining experience for and leveling up the wizard, and whatever else there is to do between games, since this was only a one-off pickup game in preparation for a planned campaign at the gaming store.

Overall I thought the game was okay. It was fun, and easy to remember most of the rules. However, there were several things I didn't like. The extreme randomness of the combat made a lot of it seem pretty arbitrary. When you attack an enemy, each side rolls D20 and add their models fight stat, plus some situational modifiers, and the higher total wins. Damage is also based on how high the winner rolled. So it is very common to win but do no damage or insignificant damage. And also pretty common for a model to get taken out with one hit.

The basic scenario has six treasure counters on the table and you attempt to get as many of them off the board as you can. If the enemy has no models left on the board, you get whatever treasure is left. So it seems like there isn't much value in going after the treasure when you'd be better off attempting to wipe out the opponent. Especially in this particular case where there was a treasure in some ruins. Carrying a treasure halves movement, and so does climbing, so it took forever to get down from the ruined tower with a treasure. I would have been better off ignoring at least those treasures. But maybe this is less of an issue with the other scenarios in the book.

The game does focus on the wizard, and there are a lot of spells in the game, many of which can do interesting things like create difficult terrain or walls, make holes in walls or floors, buff allies or weaken enemies, etc. Unfortunately, it seems like there are only a handful of spells that will get most of the use. It seems like any ranged direct damage spells is usually going to be the go-to choice, since that has the chance of a one shot kill on an enemy at range, which is going to be more useful than most other things you can do. Telekinesis seems really useful until all the treasures are picked up. Maybe this improves later in the campaign, but it seems like, even though there is a huge range of spells, you'll only see a handful actually getting used in game.

All that being said, obviously the campaign aspect and gaining treasure and leveling up are a big part of the game, and I haven't had experience with that at all. The game does probably lend itself to having a backround and storyline for your warband, or at least for your wizard and apprentice. There is the possibility for some heroic feats by your hired goons that could make for an entertaining and memorable narrative. So I wouldn't mind playing more and giving the campaign aspect a try.
Posted by Craig Welter at 10:05 AM