A Union infantry division under Major General Winfield Scott Hancock has been sent to secure a strategically important bridge. The Confederate army on the other side of the river is not ready for an engagement, and needs time to either redeploy and dig in or evacuate. They have sent Major General James Longstreet with two brigades of infantry to delay the Federal advance and blow the bridge. The Union division arrives before the explosives are ready, and now the Confederates must scramble to delay the Union advance long enough to blow the vital river crossing.

The Scenario
As stated in the title, the rules we used for this game were Black Powder from Warlord Games. The scenario is from an article titled "Bitesize battles - Blow the bridge" from Wargames Soldiers & Strategy magazine, issue #76. There is a river running across the middle of the table, with a bridge being the only way across. The defender, in this case the Confederates, have to defend the bridge long enough to set the explosives, but how long it takes is randomized. The defender is deployed up to about one move in front of the river. The attacker moves on in the first turn of the game. After six turns, the defender starts rolling every turn on a table to determine if the explosives go off. An attacking unit has to make it across the bridge before the explosion to prevent the destruction of the bridge and thereby win the game.

There were a few things about the scenario that weren't quite clear. Such as, do you start rolling at the end of turn six, or at the end of turn seven? There also wasn't any specific rules about the bridge as part of the scenario, so we assumed it would be just like a road, but a unit would have to be in march column to move across it. The scenario was initially written for Napoleonic forces, so I had to somewhat adapt it to the American Civil War period and the units I had available, and also to the terrain I had available.

The Forces
The scenario specified a three to two ratio of attackers to defenders, with no cavalry on either side. Using the units I had available, that gave two brigades each of four regiments for the Confederate division, and three brigades of four regiments each for the Union division. To determine the attributes of each brigade commander, we drew cards from my Black Powder officer personality card decks. We didn't draw cards for the division commanders and just left them as standard with Staff Rating of 8, though in retrospect I think it would have been fun to randomize the division commanders as well. At any rate, the resulting forces were as follows. 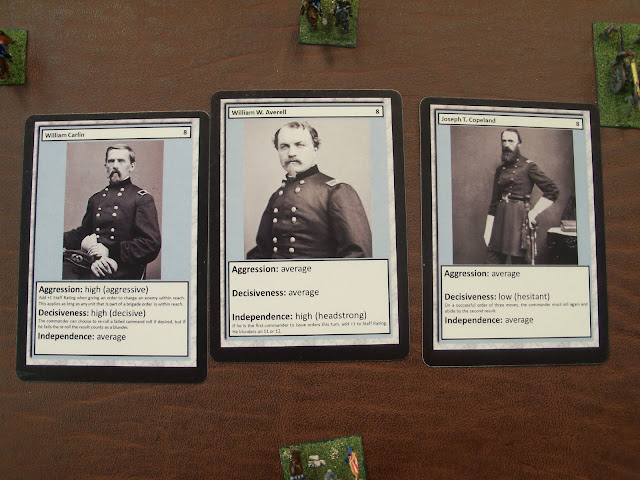 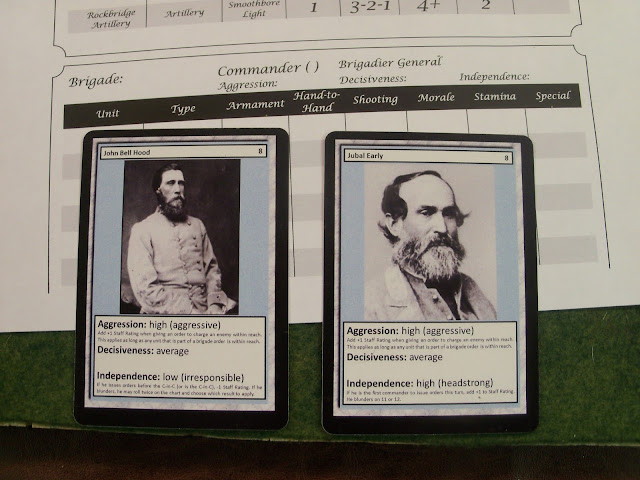 The Setup
There was one large hill on the table (upper left corner of the picture) that had no effect on movement, and was only relevant for blocking line of sight. The fields were deemed to be difficult ground, halving movement. The woods also reduced movement by half. In addition, they gave +1 morale save to those inside and would limit line of sight to 6cm. That is, units could only draw line of sight through at most 6cm of woods. The river was of course impassible, and the fences around the fields would give the +1 morale save for obscuring a target. The red felt represents the road leading to the bridge. The rest of the table was open ground. The Union army would move onto the board edge on the left side of the picture. The table was 4' x 4'. 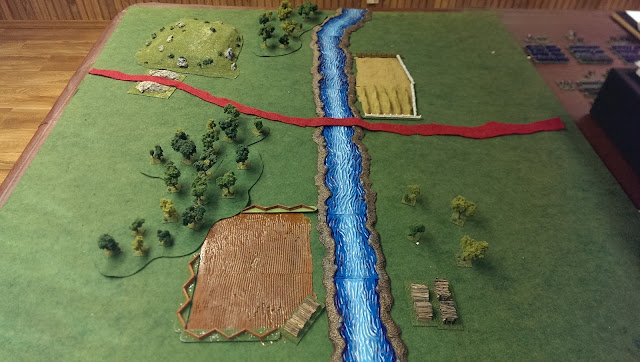 The Stonewall Brigade, including its artillery battery, deployed between the road and the woods on their right, with a double line of regiments. Two regiments of Hood's Texans were on the other side of the road facing it, protected from view by the woods. The other two of Hood's regiments were still on the other side of the river in march column, ready to spring into action if needed to defend the engineers working to destroy the bridge. 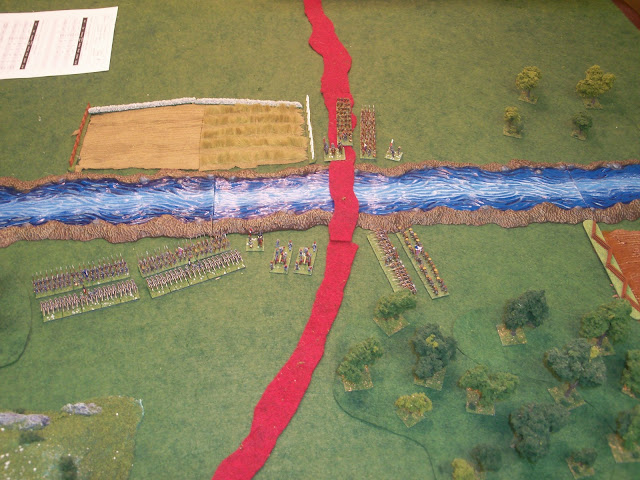 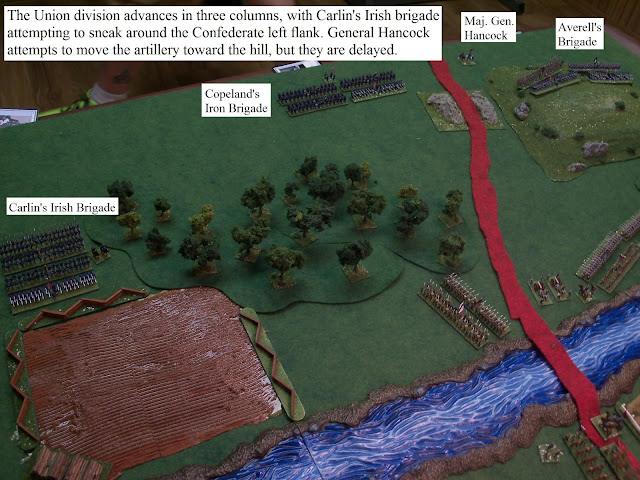 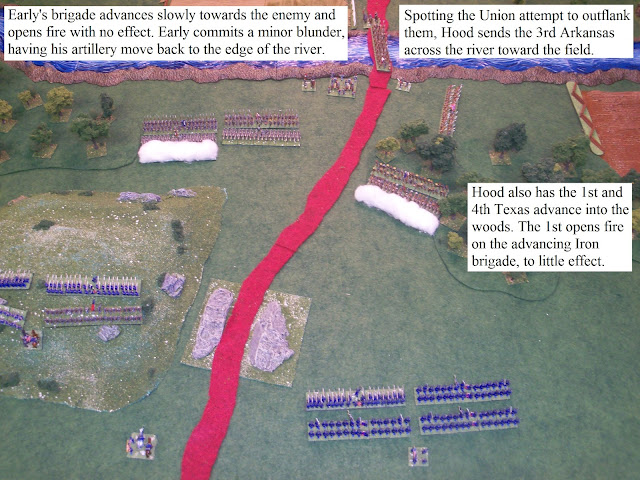 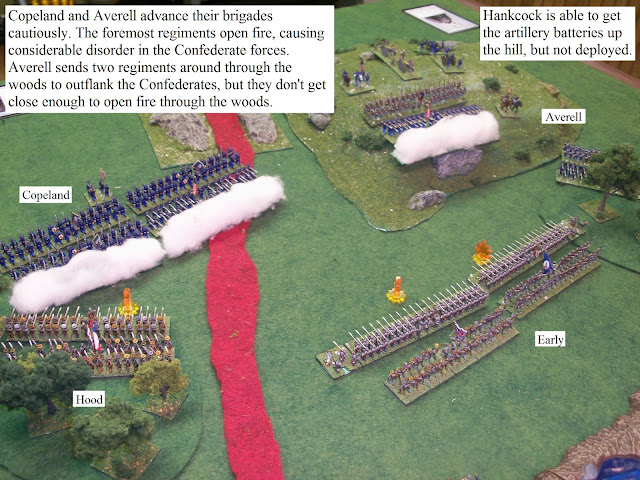 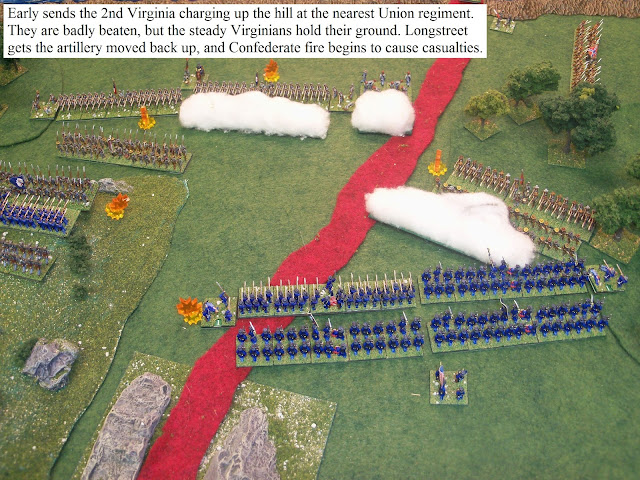 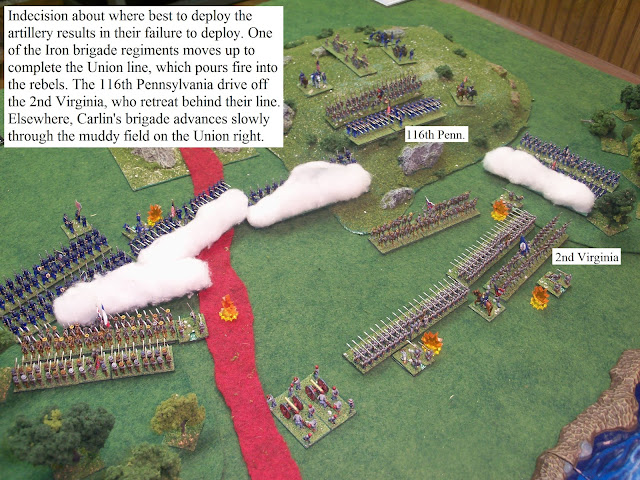 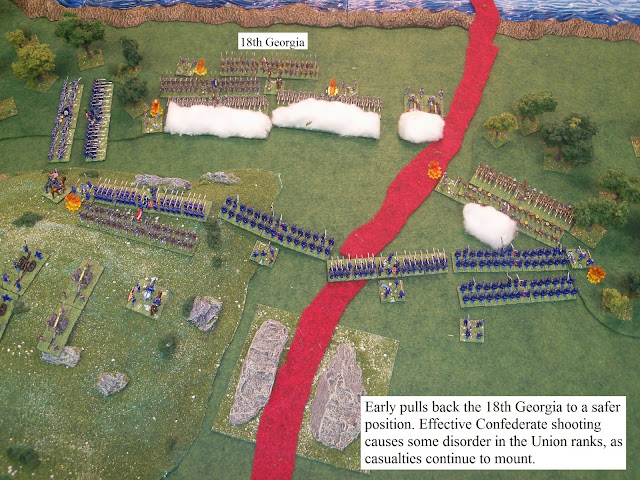 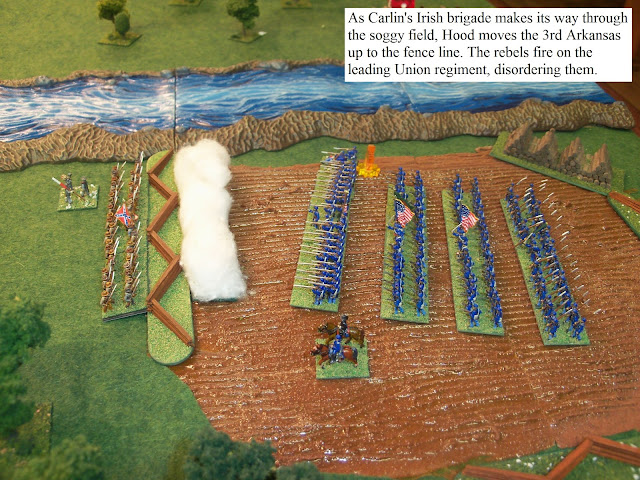 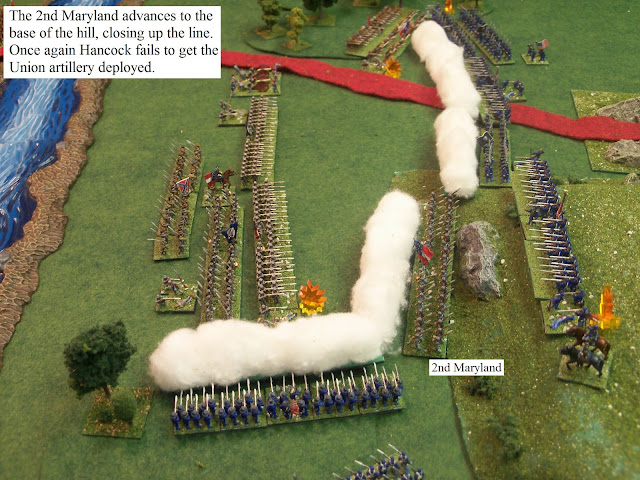 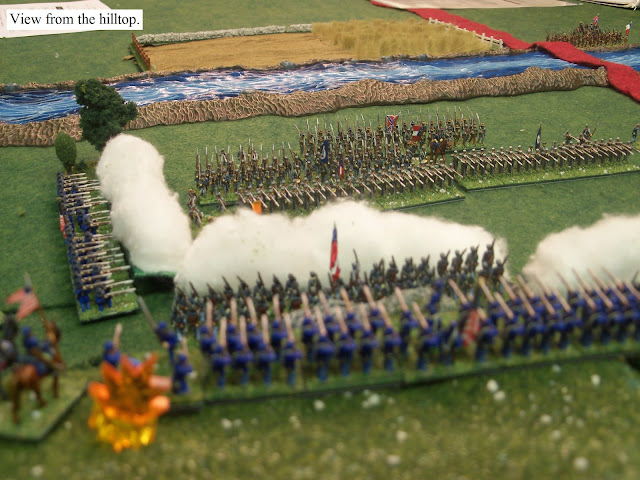 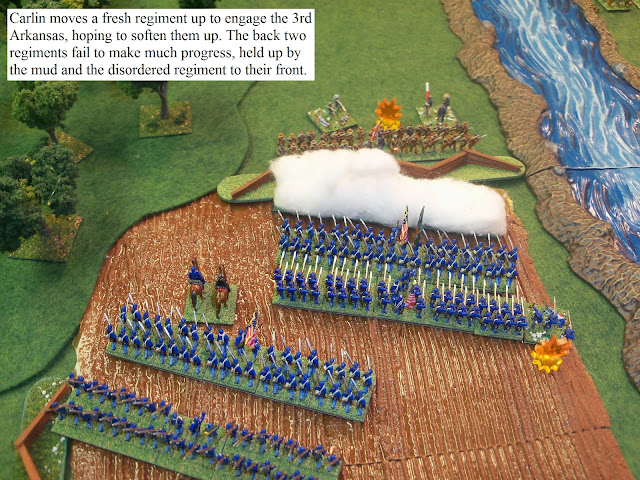 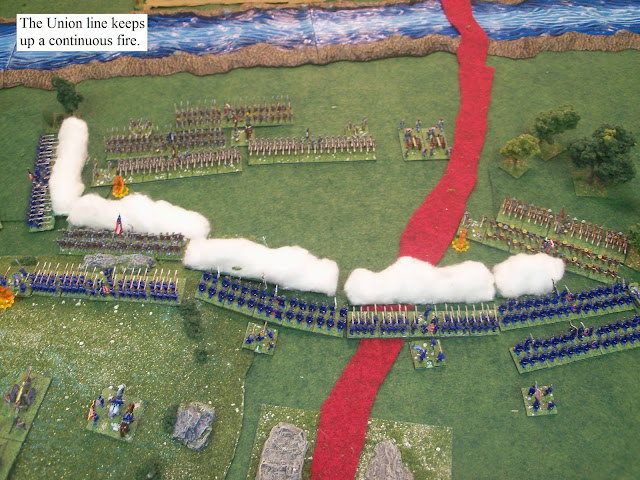 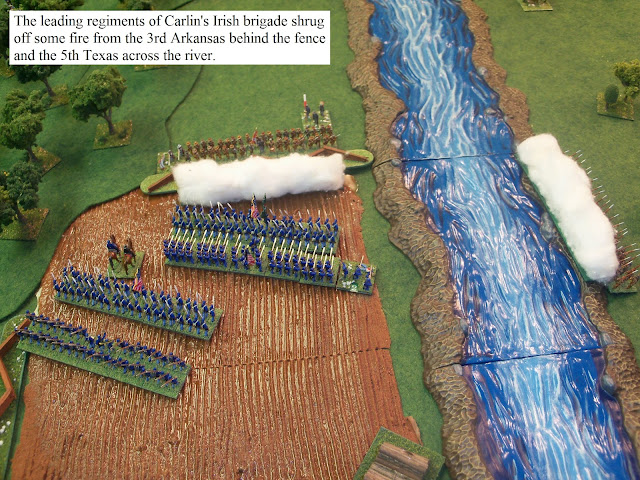 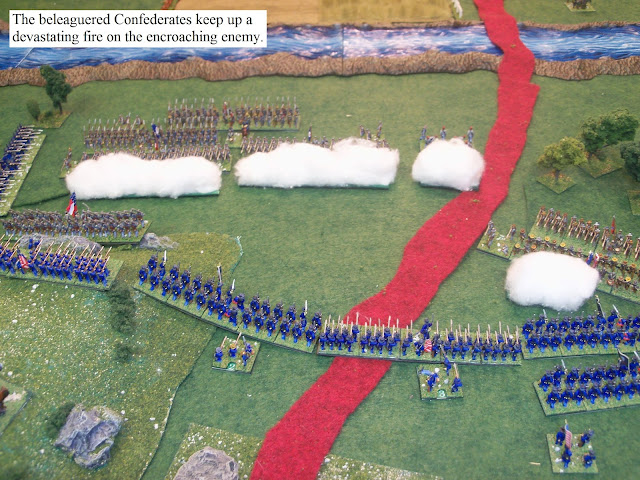 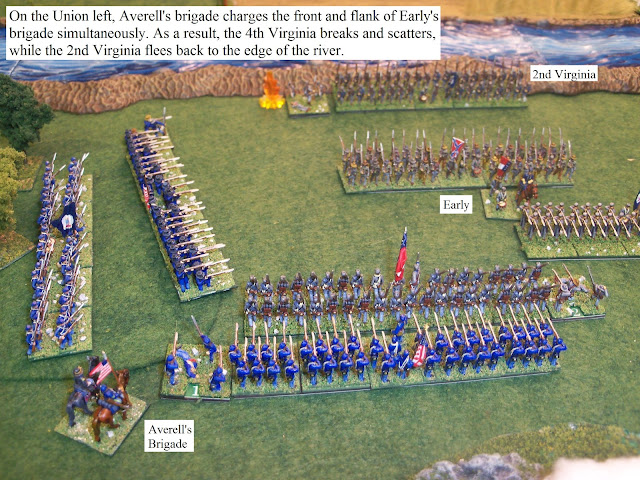 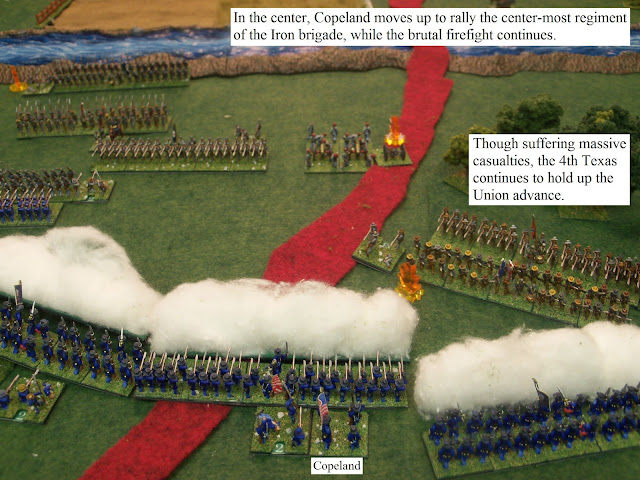 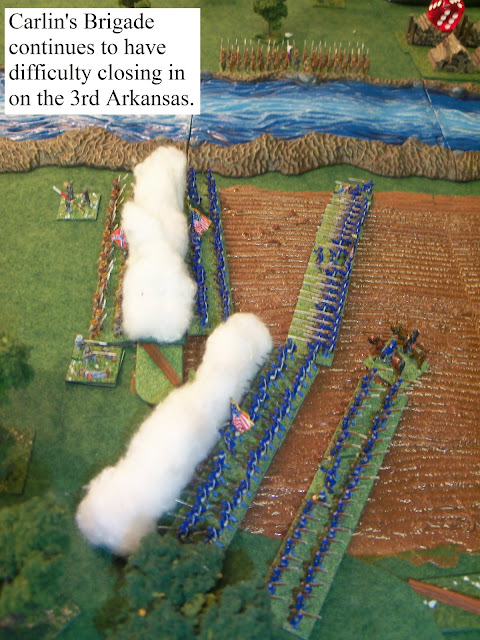 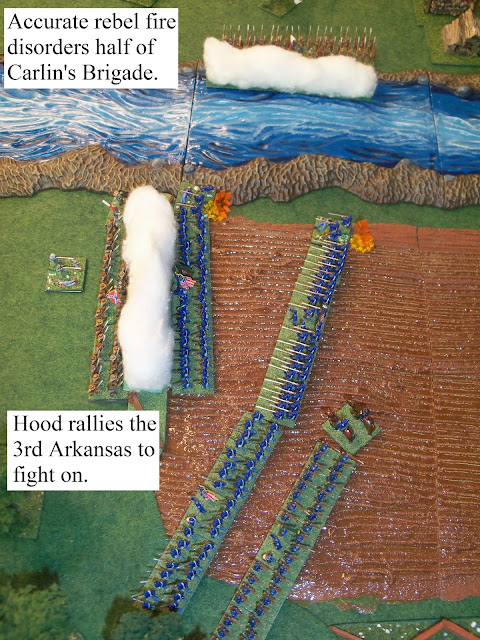 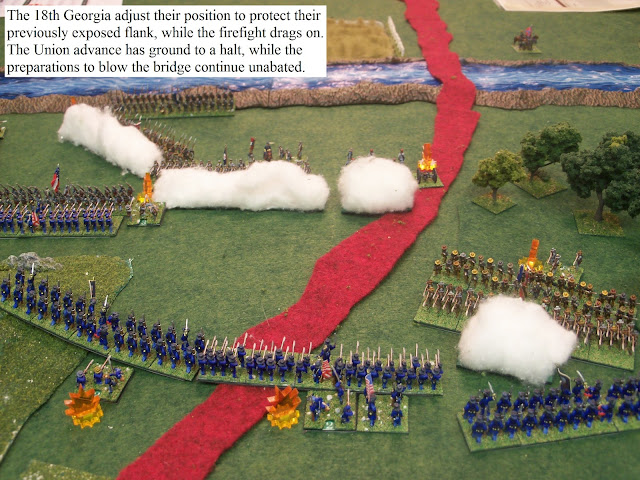 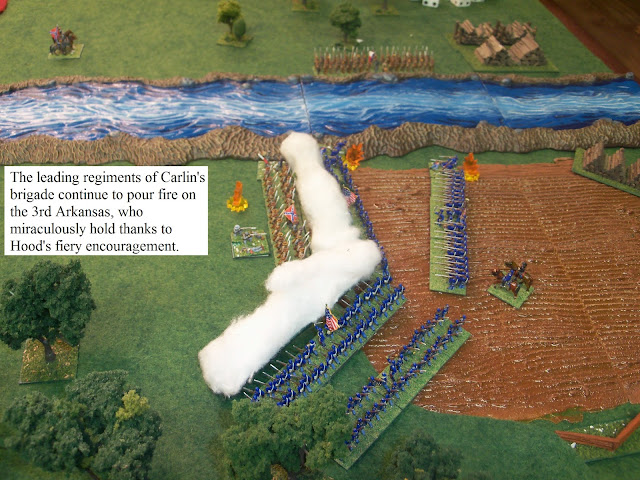 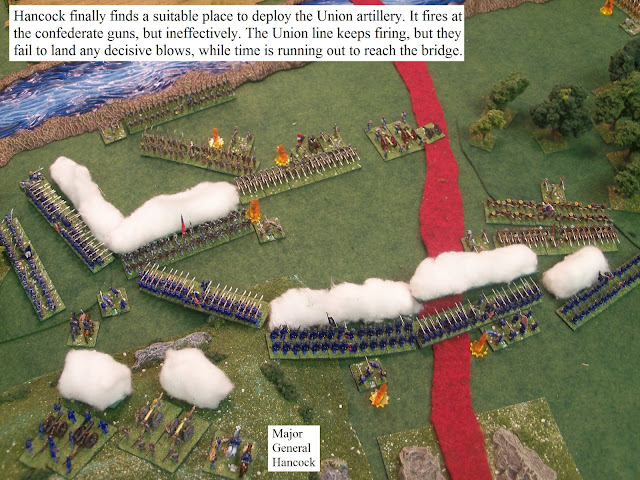 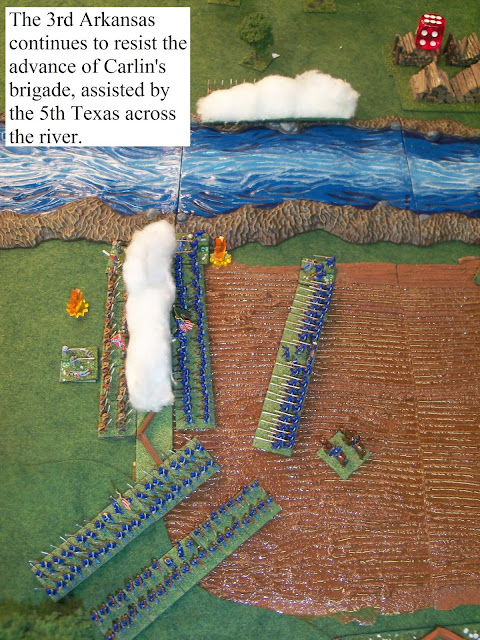 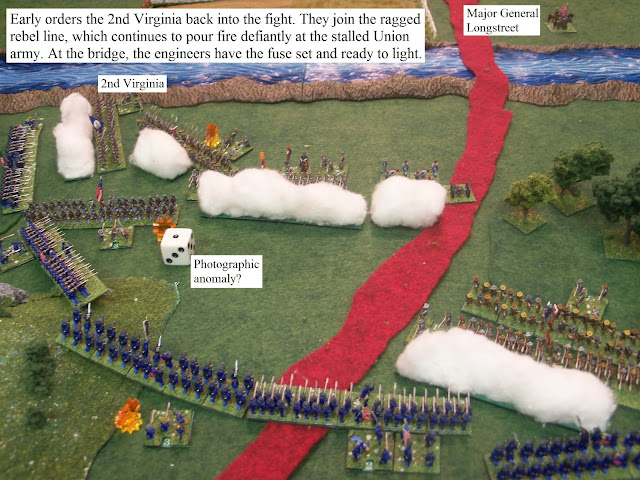 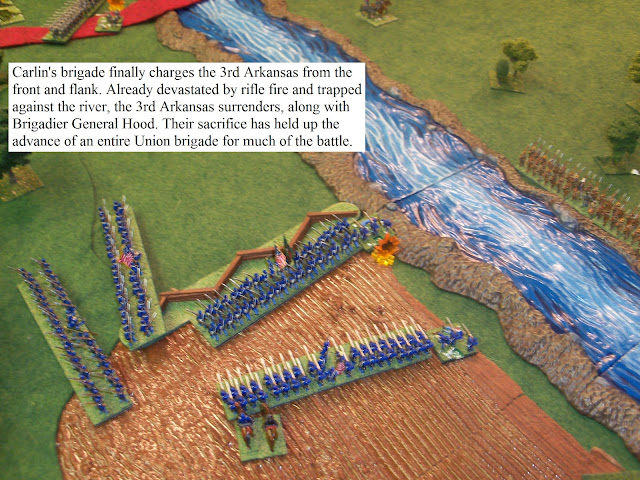 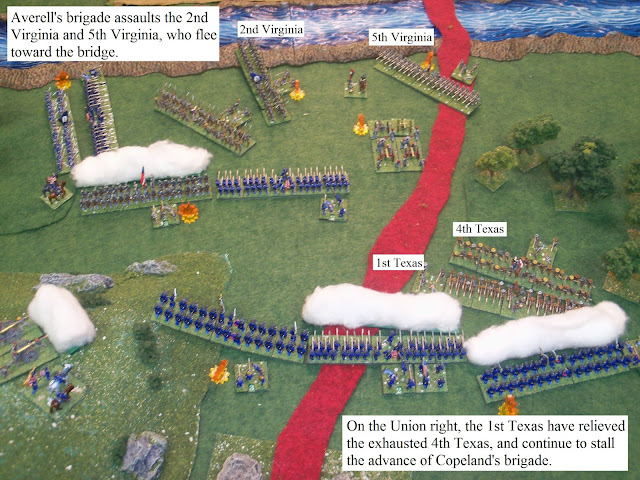 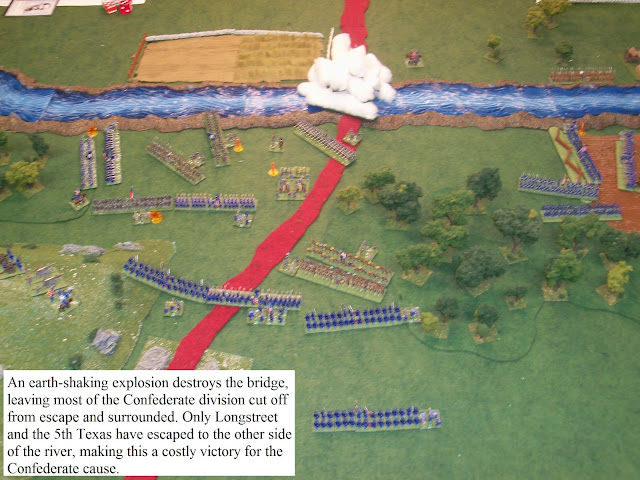 Conclusion
The Confederates won the day, but it was a very costly victory. It is hard to imagine a situation where it would be worth losing 6 regiments and two Brigadier Generals in order to blow a bridge. It is a bit of a problem with this scenario, I think. All that matters is keeping the enemy from crossing the bridge, even if you lose your whole army in the process. There is no penalty for having units left on the far side of the bridge when it blows. I think the scenario would be better if it somehow encouraged trying to lose as few regiments as possible in the process of delaying the enemy long enough to blow the bridge.

Another thing I have been noticing in our Black Powder games is that artillery seems more resilient than it should be to rifle fire. My impression from reading about Civil War battles is that if an artillery battery is being fired on by an entire infantry regiment, it is in trouble. With everyone having rifled firearms, I think the artillery tended to stay farther back than it probably did in Napoleonic battles, but the rules don't encourage that. Artillery batteries have one lower stamina than an infantry regiment, but they are -1 to hit, so they end up being able to take about as much fire as a full infantry regiment. Maybe a good house rule would be that the -1 to hit deployed artillery shouldn't apply when firing with a rifled firearm or gun. But it might work to solve the problem with unit stats instead of house rules, by just lowering the morale or stamina of all artillery to make them more fragile, thereby discouraging them from deploying too close to the enemy. Though I also want to somehow find a way to represent that Union batteries were usually six guns, and Confederate batteries only 4.

Still, it was a fun and challenging game. As the Union player, I think I wasn't aggressive enough early enough. I should have been assaulting more to try to get more decisive results, instead of getting bogged down in a long firefight. I also didn't get any use out of my artillery, since I kept failing order tests to move and deploy them. And when I got them deployed, the combination of long range and shooting over my own units meant I needed sixes to hit, and only rolling a single die per battery, so they never hit anything. But credit to my opponent, who put the pressure on early on, and was able to very effectively stall my advance a good distance from the bridge. Hopefully we can give it another try some time, with some adjustments to the scenario to reward the defender for escaping with some of his units instead of sacrificing them all to blow the bridge.
Posted by Craig Welter at 3:13 PM