Lately I've been working on some ideas for fantasy rules, essentially to have something to play using my existing collection of Warhammer miniatures. I've been looking for some existing rules that would work, but nothing I've read so far really fits what I'm looking for. It has to cover a pretty huge range of fantasy creatures, from mindless zombies up to gigantic dragons. I also want something with a 1:1 figure ratio, so each model represents an individual person (or orc, or dragon, or whatever). But I want the rules to be streamlined enough to have a lot of figures on the table, as I have many dozens of skeletons and zombies. Since I was unable to find any existing rules I liked that satisfied these needs, I started thinking about what kind of rules might do the job.

I've now made enough progress and gotten enough written down to try out some playtests of the rules, and this was the first game I played with them. I don't yet have rules for magic, and some special rules for particularly different things like the undead need to be ironed out, but I wanted to try out the core mechanics and see how it played.

In this scenario, the defender is escorting a very important person (we'll call her Princess Wutzernäm) from someplace to some other place. Along the way, they are ambushed by the attacker, who must attempt to capture the princess and escape with her off one of the board edges. Luckily for the princess, help is on the way and will arrive soon, so the attacker will have to fight their way past the reinforcements to escape with their captive. 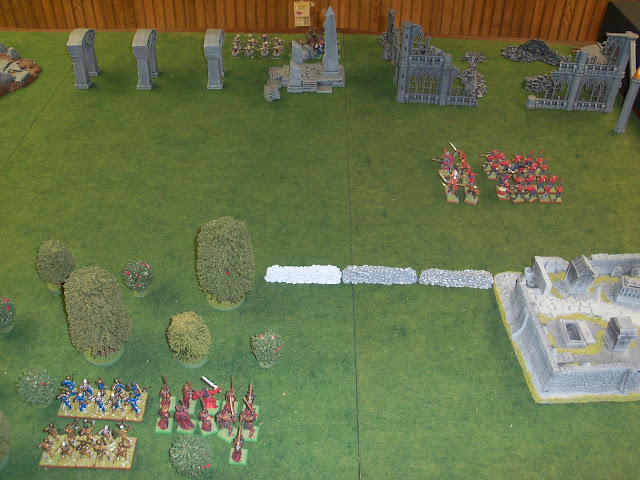 The deployment. A unit of militia with a captain and Princess Wutzernäm are at the head of the column, followed by two units of ten handgunners. Of to their left are a vampire with 10 grave guard, and two units of 10 skeletons each. To their right is a necromancer with 10 more grave guard, and 12 ghouls. 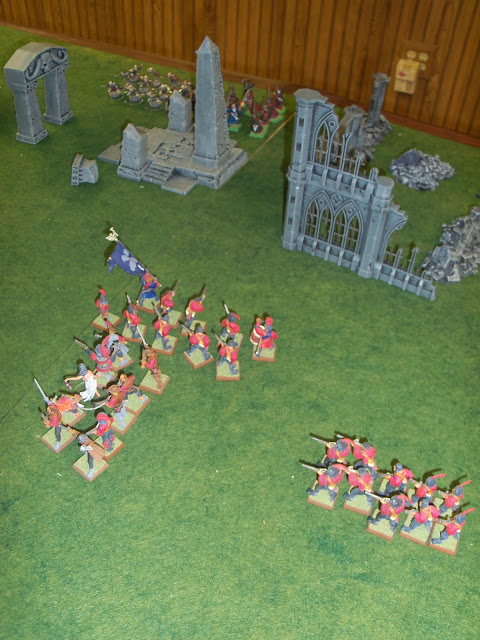 The handgunners on the right panic at the sight of the enemy surrounding them, and do nothing. The rest of the Empire force moves forward and to the right, towards the weaker enemy force. 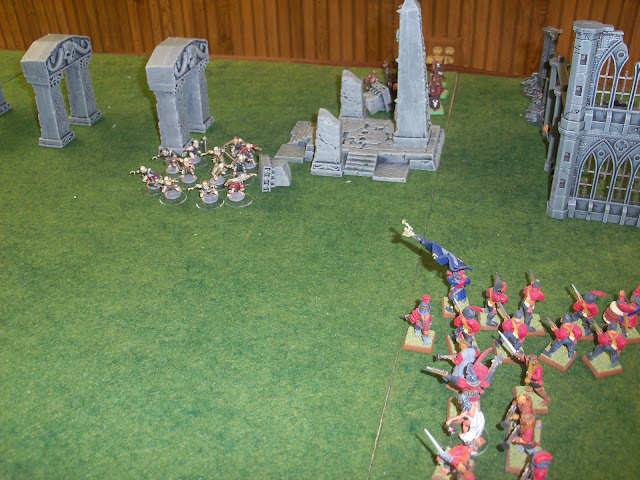 In a moment of uncertainty, the necromancer fails to lead the grave guard forward, but the ghouls move toward their enemy. 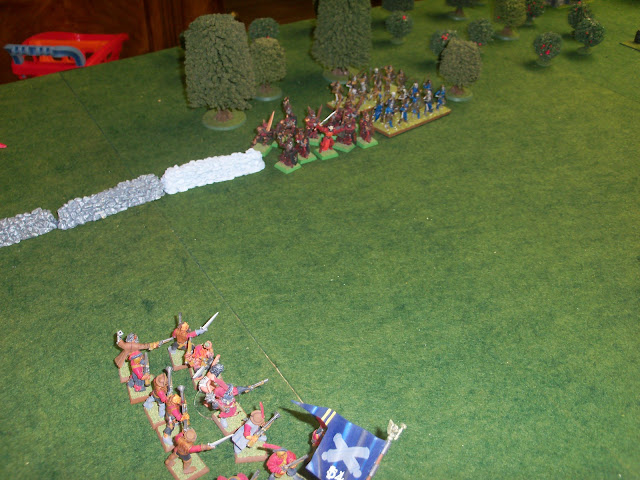 On the other side of the battlefield, the skeletons and the grave guard all advance, with the vampire leading them. 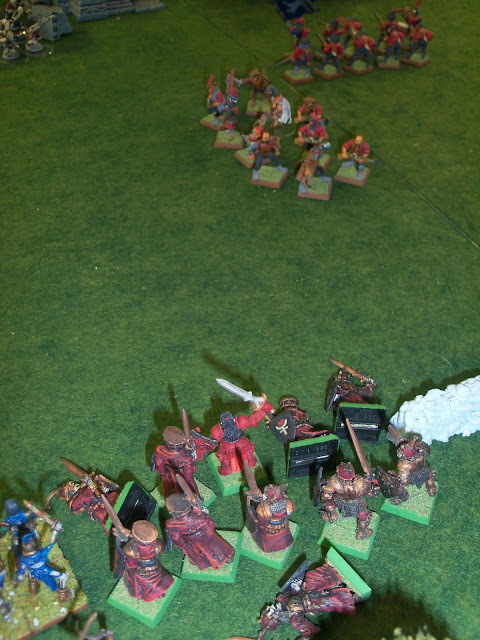 The captain and militia move up to fire at the biggest threat, which is the grave guard led by the vampire. With some amazing shooting, they take out four of the grave guard. Unfortunately, both units of handgunners freeze in panic. 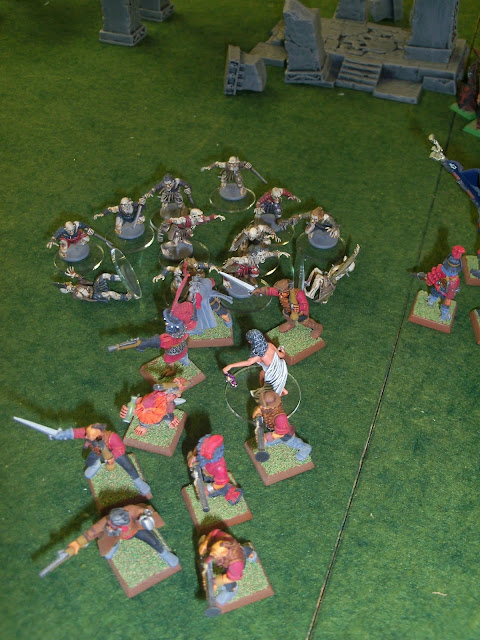 The necromancer moves up with his grave guard, and the ghouls charge the militia unit. They fails to cause any casualties. The militia kill two of the ghouls, and the rest flee in disorder. 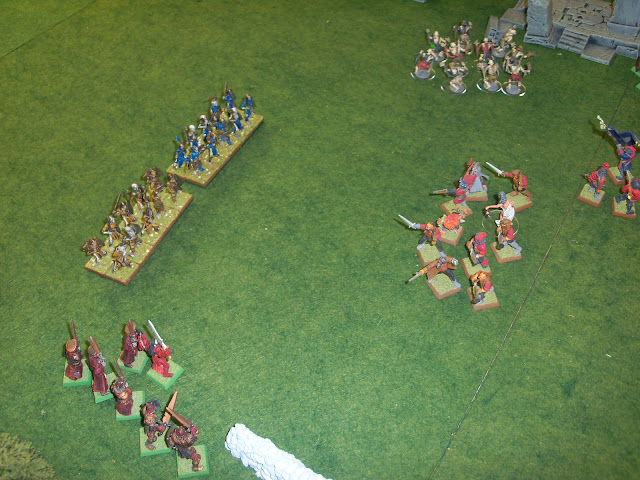 Both units of skeletons move up to block the path of the militia. 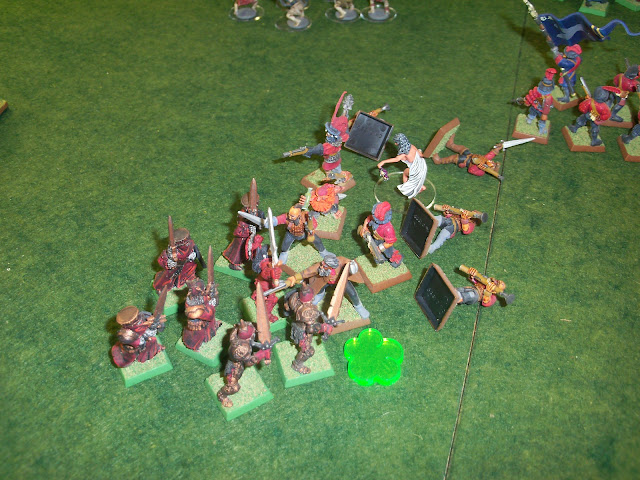 The vampire charges with his grave guard into the militia. They kill four of the militia, and take no casualties in return. Due to to the courageous leadership of the captain, the militia hold their ground. 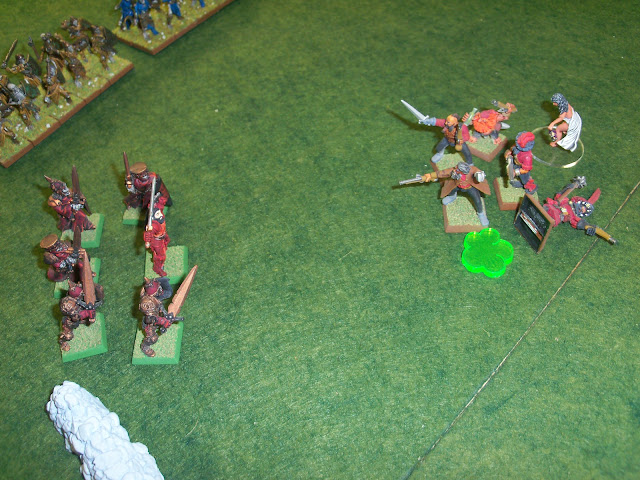 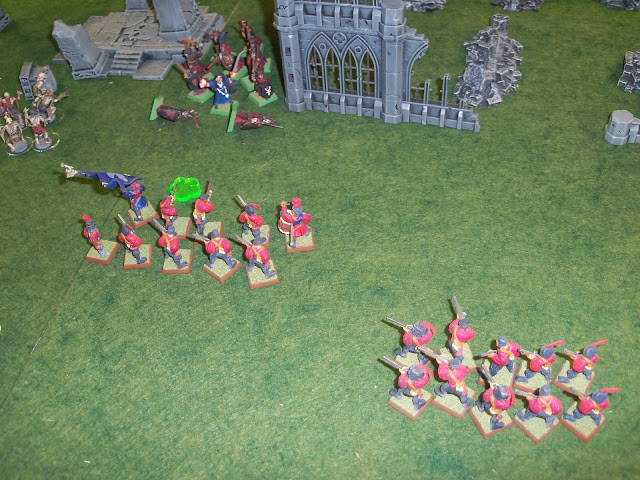 Both units of handgunners fire on the grave guard with the necromancer, but only manage to take down two of them. 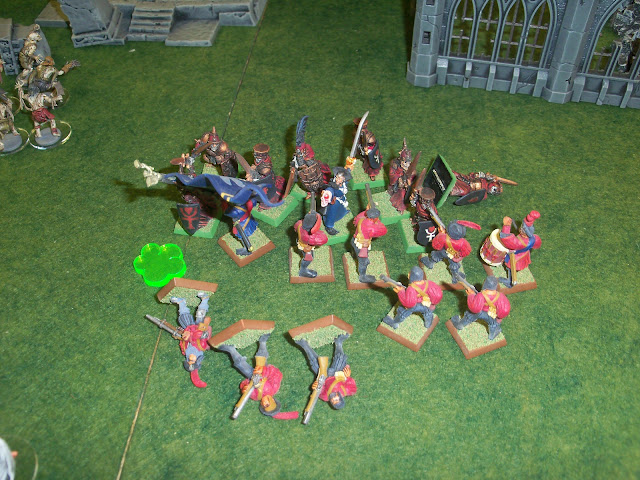 The disordered ghouls fail to rally. The necromancer and grave guard charge a unit of handgunners and kill three of them, only losing one of their own, but the handgunners hold their ground. 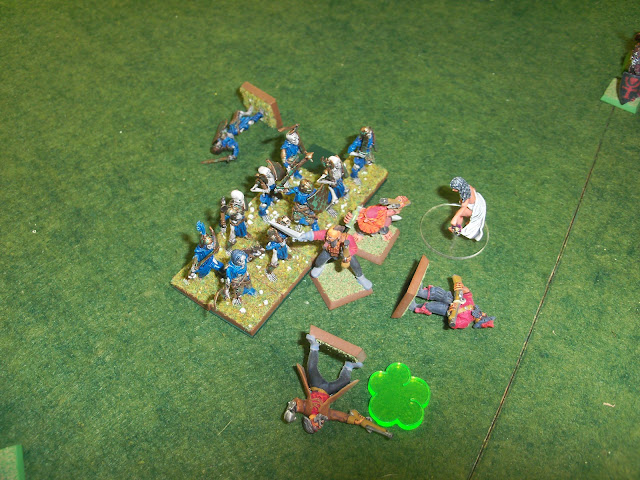 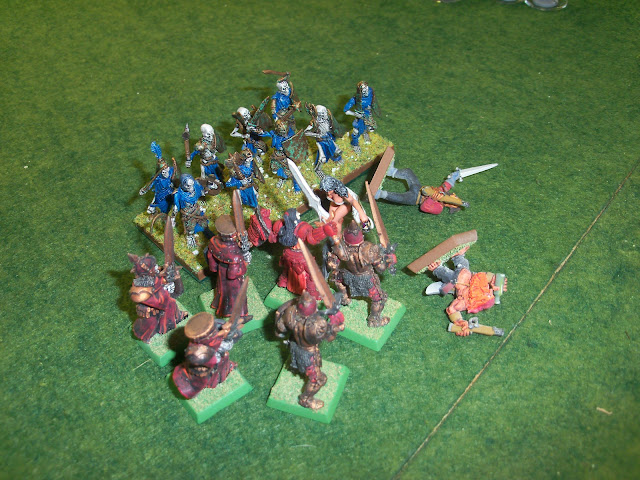 The skeletons in blue charge the militia escorting the princess and kill two of them, but the surviving militia hold their ground. The vampire then charges with his grave guard and finishes off the rest of the militia, capturing the princess. 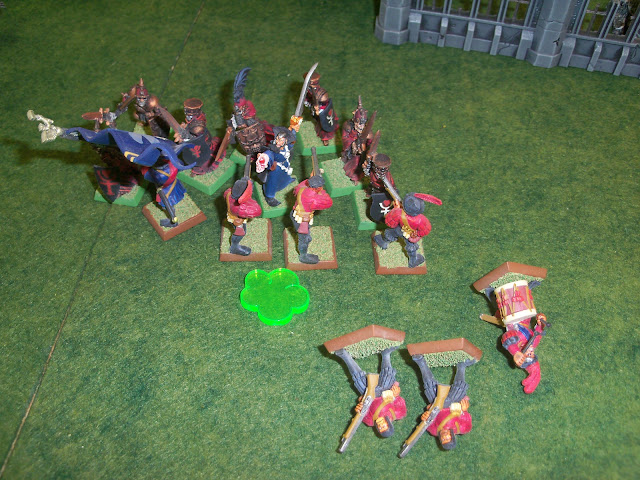 The grave guard with the necromancer kill three handgunners, and the rest fall back in disorder. The other handgunners reload their guns. Not pictured, the cavalry arrives! Two units of knights arrive at the Empire table edge. 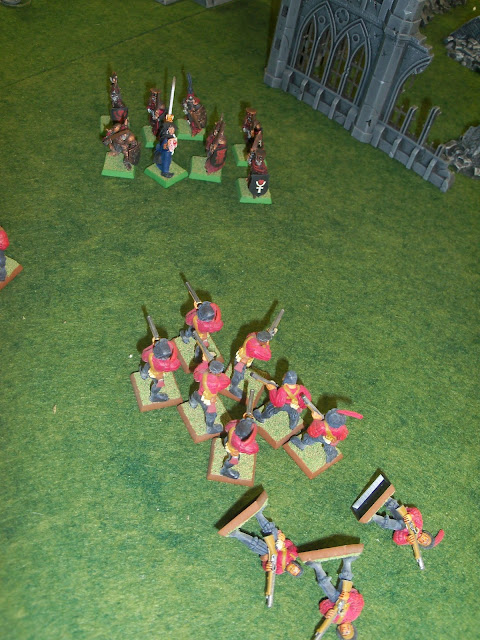 The ghouls again fail to rally, and mill about in disorder. The necromancer and grave guard charge the other unit of handgunners and kill three of them, but the necromancer is wounded in the fight and decides to fall back when the handgunners refuse to give ground. 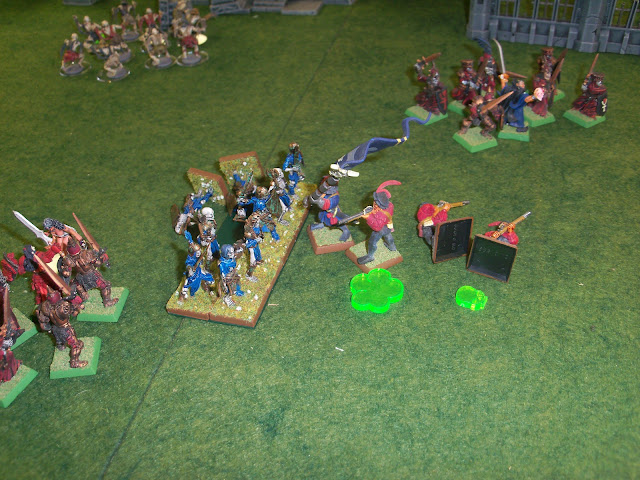 The skeletons in blue attack the already disordered handgunners. Both sides lose two, but the handgunners hold. 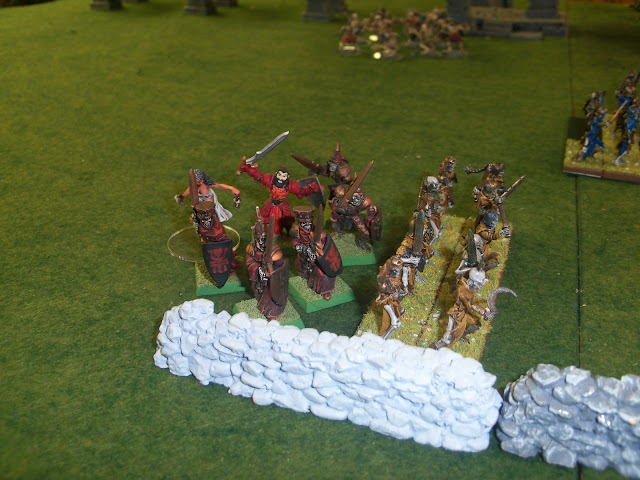 The vampire starts to make his escape with the princess, protected in front by the skeletons in yellow. 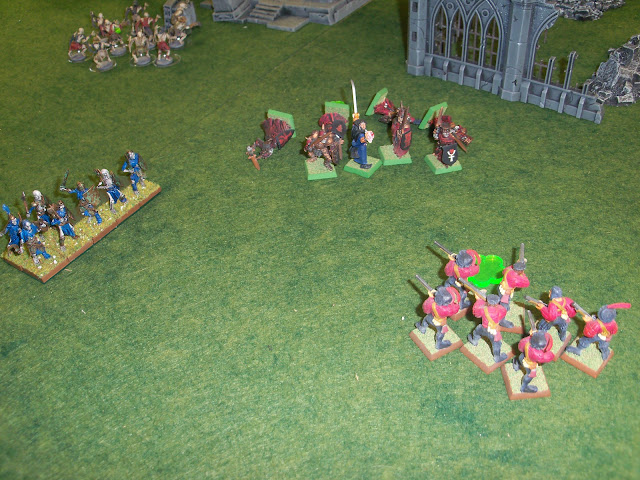 The skeletons in blue break the handgunners. The other unit of handgunners opens fire on the grave guard with the necromancer and take out four of them. The projectiles whizzing past cause the necromancer to panic and become disordered. 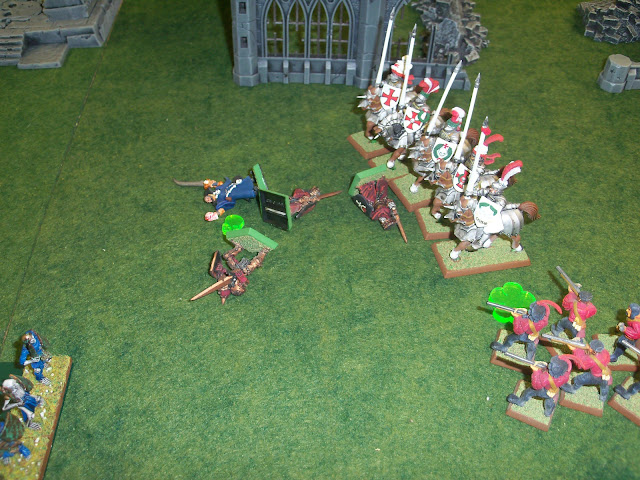 The knights on the right take the opportunity to charge the necromancer's unit, and wipe them out. 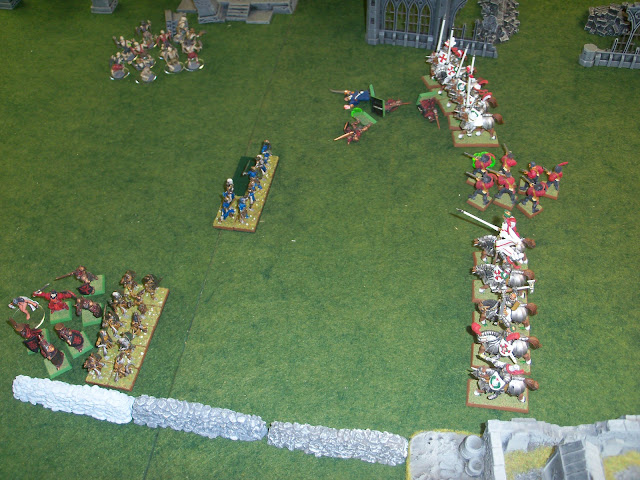 The knights on the left, accompanied by a warrior priest, advance toward the skeletons protecting the vampire. 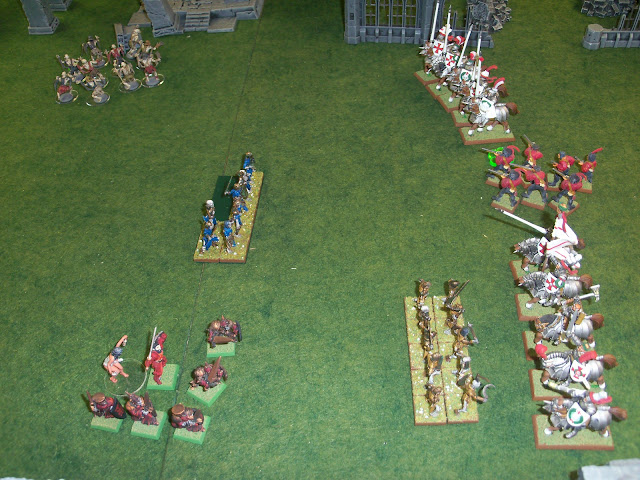 The ghouls, left on their own on that flank, fail to recover yet again. The vampire fails to order the skeletons in blue, but he advances his own unit behind the protection of the skeletons in yellow. 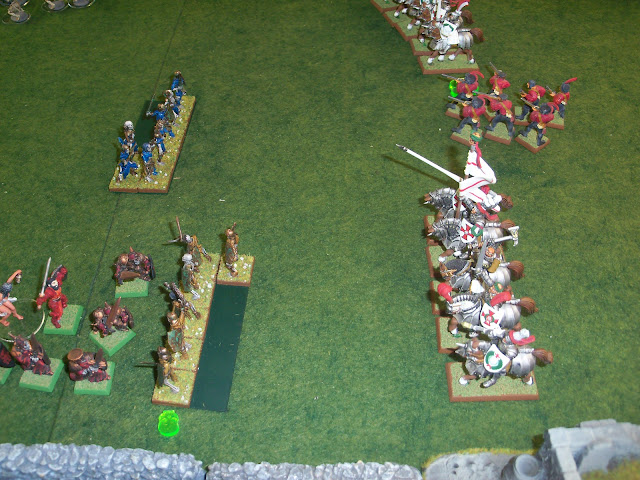 The warrior priest and his knights attack the skeletons in yellow, killing four. They flee disordered. 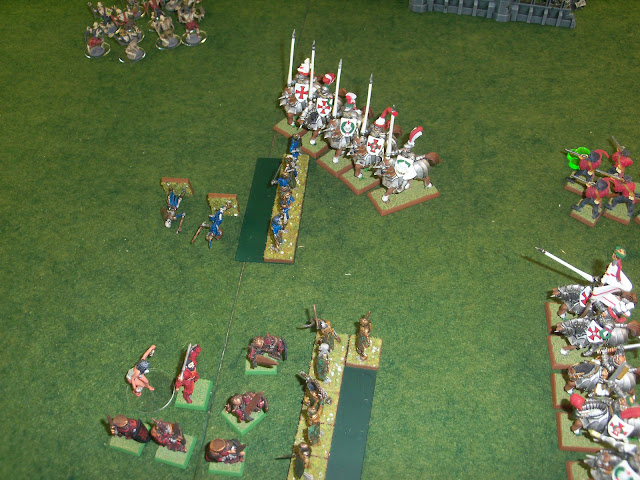 The other knights charge the skeletons in blue, but only manage to destroy two of them, and the rest hold their ground. 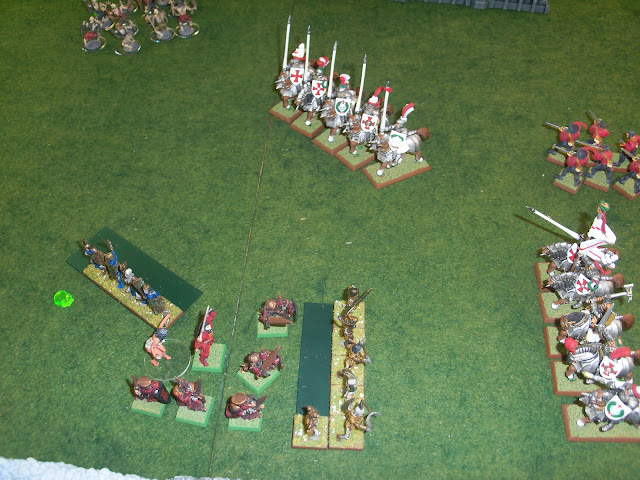 The yellow skeletons rally. The ghouls still don't. In their continuing battle, the knights take down one more of the skeletons in blue, which causes them to fall back. 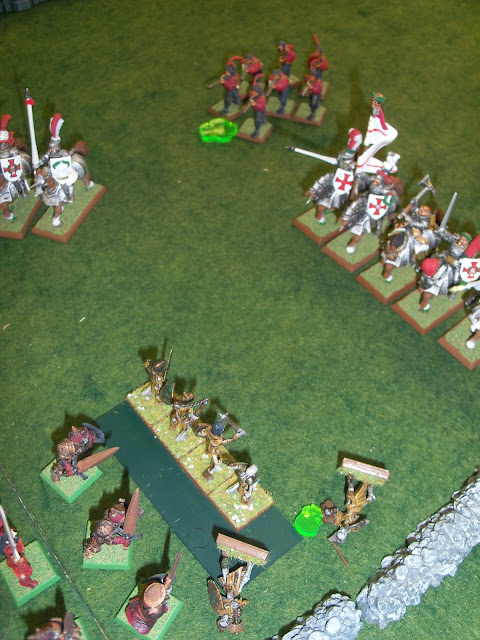 The remaining handgunners fire at the skeletons in yellow, taking out two of them. The recently rallied skeletons become disordered again. 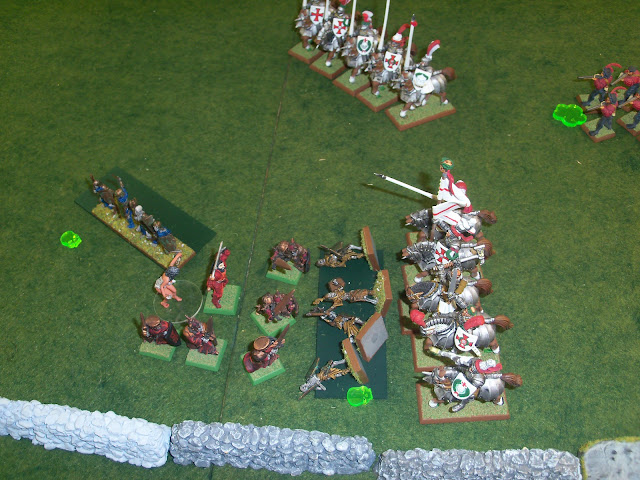 The warrior priest charges the disordered skeletons with his knights, and wipes them out. 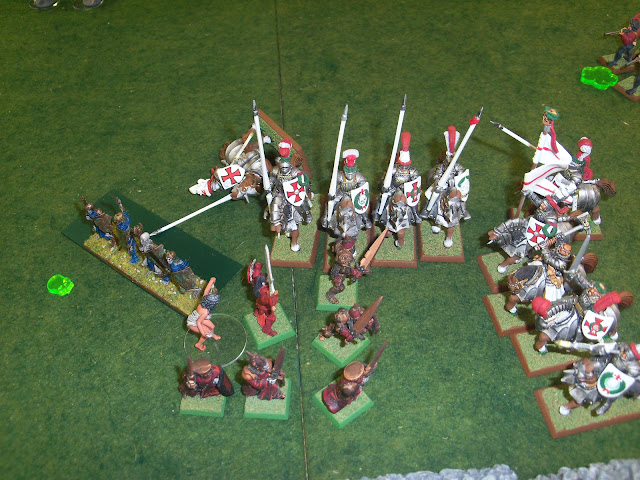 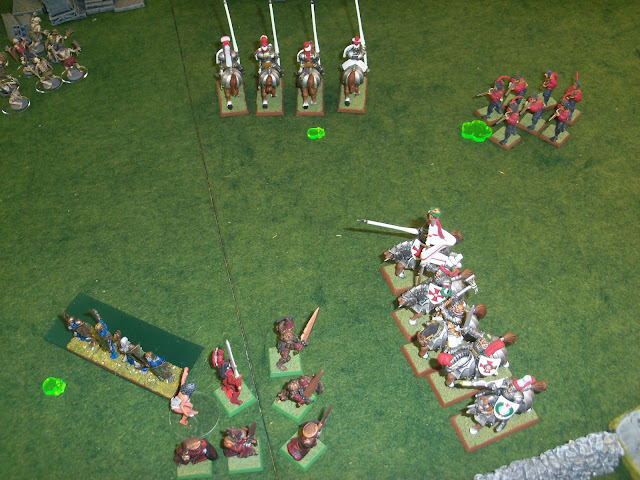 The other knights charge the vampire and his 5 remaining grave guard. They miss with all their attacks, and the grave guard kill one of the knights. The knights panic and flee. 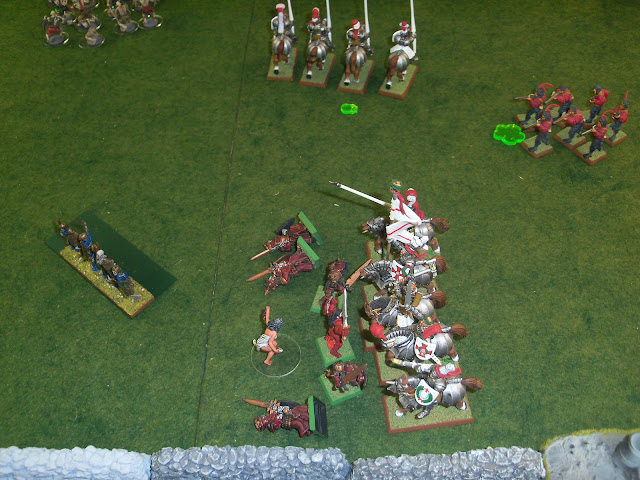 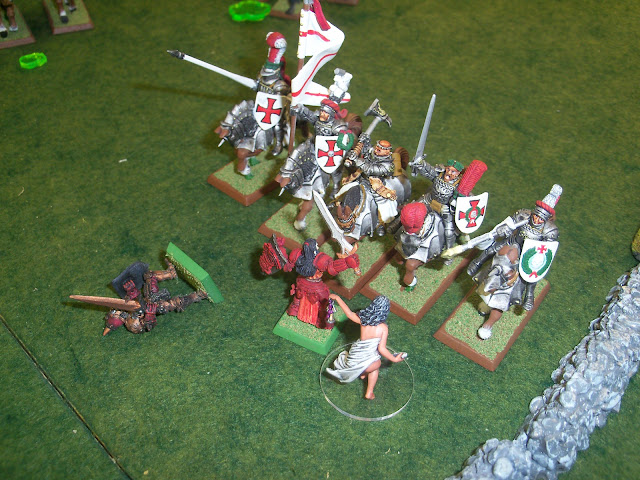 The unit of skeletons in blue rallies, but the ghouls fail yet again, and continue to lurk about trying to avoid danger. The vampire charges the knights. Eventually all of the grave guard are cut down, as they are unable to penetrate the armor of the knights. Time runs out for the vampire to escape with the princess, and he is forced to give her back up to the rescuing knights.

I liked the scenario, and the game went pretty well and played quickly. I wasn't satisfied with the combat mechanics. Combat didn't seem deadly enough, and it felt like there was too much variance in how many casualties were caused. It also seemed like combats between highly armored units (like the knights and vampire) could just drag on forever without a result. I already had another idea in mind for the combat mechanics, so I played the same scenario again using the alternate version. I think the second game went much better, but that will be the subject of another blog post.
Posted by Craig Welter at 8:00 AM