Since I've been playing Warhammer Quest again, I couldn't help but notice that my old rule books were looking a bit worn. They have been around a long time, and since they have a lot of tables and charts to reference, especially in the roleplay book, they get flipped through a lot. There's also no way to replace them if they get damaged or worn out, because the game has been out of print for a very long time. Because I expect to continue my Warhammer Quest campaigns with my current parties for some time into the future, I decided I should do something to preserve the books and keep them usable for as long as possible. What I ended up doing is disassembling all the books before laminating each page and spiral binding them back up. This should keep them well protected long into the future. Have a look below for the results and how I achieved them.

Here are the completed books all bound up. I split the roleplay book into three parts. Partly this was just due to its huge size. Once laminated it became much thicker, and would be a huge book requiring a much larger spiral to bind it. Also, about a third of the book is the section about playing Warhammer Quest as a traditional roleplaying game with a Gamesmaster, and I don't expect to ever use this section. So I split the roleplay book roughly into thirds. The first part is all of the travelling and leveling up rules, plus events and treasure tables. The second part is the bestiary, with the rules for all the monsters and all the monster tables. The final part is the roleplaying rules, which I don't really need. Having the rest of the rules split into two parts will also be useful because I'll be able to keep one open to monster rules and another to the event tables.

As you can see, I ended up with seven laminated and spiral bound books. The Rule Book and Adventure Book were short enough that I combined them together into one. I made a book of all the White Dwarf articles I had saved that contained rules for Warhammer Quest, including the FAQ article. As mentioned, I split the roleplay book up into three sections. Then there are the supplement books, Lair of the Orc Lord and Catacombs of Terror. 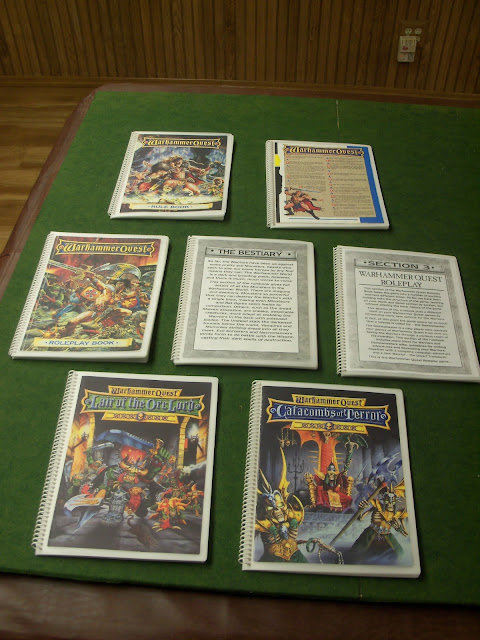 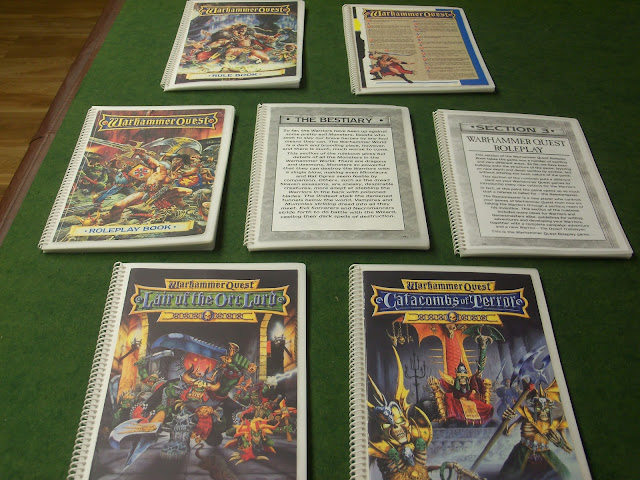 One nice benefit of the spiral binding is that the books can lay open flat on the table, so you can keep them open to the page you need to look at. Handy for the drawn out series of rolls on the travelling hazards table. You can also fold it over to show only a single page to take up less space on the table, which is handy for keeping the monster table for your level ready to reference at a moment's notice. 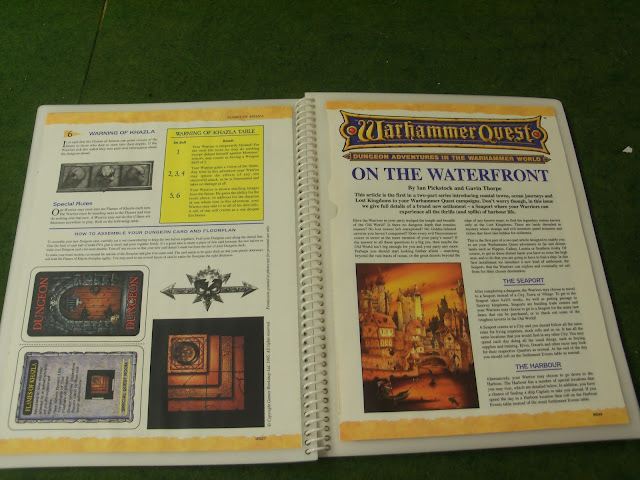 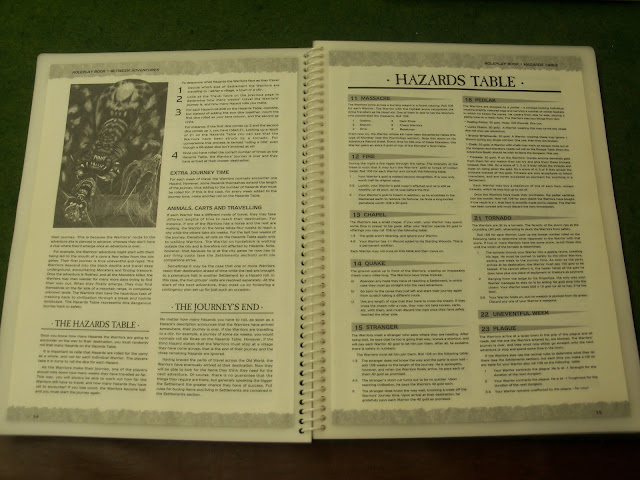 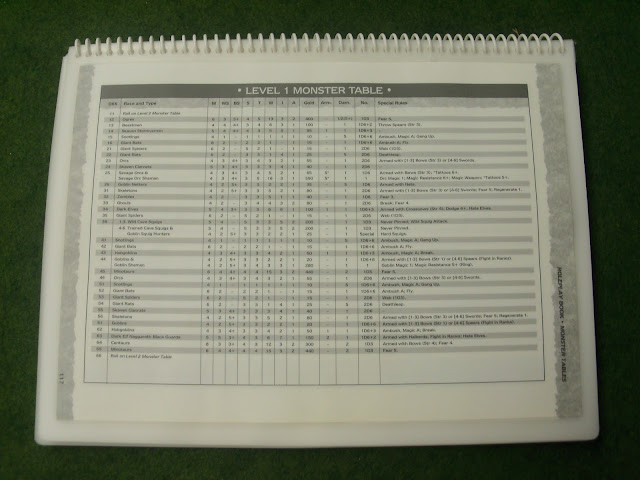 When I started this project, I already had a basic thermal pouch laminator. Everything else I needed I ended up ordering from Lamination Depot. Previously, I had mostly used my laminator on quick reference sheets for various games, so they would be extra sturdy and stand up to constant handling. I used normal glossy laminating pouches for this purpose, but I thought they might be too reflective when laminating an entire book with them. So for this project I ordered some matte Letter Size Laminating Pouches. The ones I got are the 3 Mil Letter Matte/Matte Laminating Pouches (100/bx), and they worked really well. They aren't as stiff and sturdy as the normally glossy ones, but I think that is probably a good thing when doing an whole rulebook. They also don't have the extreme glare of the glossy pouches, but don't appear to make the page look dull or frosty at all.

Because the pages of these books are quite a bit thinner than the laminating pouches, I made sure to leave all the extra space on one side of the page, specifically the one where the spiral binding would be. This was way more space than was needed to do the binding, so I trimmed off some of the excess to make the books have a slightly smaller footprint, while still leaving enough room to punch holes for the binding without getting the holes too close to the paper. For this I ordered a Dahle Personal 12.5 in. Rolling Paper Trimmer from the selection of Rotary Paper Trimmers on Lamination Depot, which worked really well. But if you don't mind having the extra room in the margin, or your rulebook has wider pages, this won't be necessary.

Another thing I needed from Lamination Depot was one of the Spiral Binding Machines for punching the holes in the right spots for the spiral binding. I went with the "TruBind TB-S20A Coil Binding Machine with Electric Coil Inserter". The electric coil inserter isn't much of a selling point for me, but this one does have disengaging dies, meaning you can have it not punch certain holes. This is useful to prevent having like half a hole punched at one end of the paper if you are using a paper size that doesn't end up lining up exactly right, which is the case with the laminating pouches as they are necessarily a little bigger than a normal sheet of paper. It's really not that big a deal and is only a cosmetic thing, so you might decide you don't care much about that.

Then of course the last thing I needed some Binding Coils. I went with the 12mm size which just about right for the thickness of most of the books I was doing. Anything much smaller wouldn't have worked with how far onto the page I had punched the holes (which is adjustable on the binding machine I got, and is referred to as the "depth margin").

Once I had everything I needed, it was a simple (though time-consuming) process to get everything laminated and bound. Step 1: disassemble all the books and cut where necessary to get single pages. Step 2: laminate each page, leaving the excess lamination on the side where the binding will be, and having roughly consistent margins of lamination on the other three sides. Step 3: (optional) trim off the excess if there is too much of a margin on the side where the binding will be. The trimmer I had could handle cutting a few sheets of the lamination at a time. Step 4: use the binding machine to punch the holes (in my case using a 4.5 mm depth margin) and be very careful to push the pages all the way in so you don't punch the holes crooked! I may have done that a few times. I was punching 2 or 3 sheets at a time. Step 5: feed the coil through the holes, then use the crimping tool that comes with the binder to crimp the ends. I had to watch a youtube video that showed how to do that part, which I would recommend. It's hard to describe in words, but really easy when you see the video. That's all there was to it, and now I have Warhammer Quest rulebooks that should last for generations to come.
Posted by Craig Welter at 8:00 AM