After their last few hunts, the survivors of Olympus are feeling pretty confident in their abilities, but not confident enough to face the totally unknown creature whose feather fell on their settlement. Zeus gathers some experienced hunters and decides to try to hunt an older, more experienced (level 2) screaming antelope, in the hope its larger body will provide greater resources.

Zeus carries his king spear and wears the newly crafted screaming coat and the helm fashioned from the skull of brave Ares (who was executed by armored strangers). Aphrodite wears a full set of rawhide armor and is armed with a the scrap sword. Athena II also wears full rawhide armor and carries both the butcher cleaver and bone axe. Rounding out the hunting party is the relatively inexperienced Artemis, who wears the cat eye circlet and is armed only with a founding stone. The intention is for her to mostly observe the battle and help the others spot weak points and openings in the monster's defense.

The group has an eventful journey as they hunt for their desired prey. They start out in a grazing field, where they find a stone statue somehow moving, hammering on a red-hot sword. Aphrodite attempts to grab the sword from the statue, but isn't quick enough. The others dare not try. They next discover the shattered ruins of a small settlement, devoid of survivors, and with a broken lantern oven at its center. In a fit of rage they smash the broken lantern oven, hardening their minds against the insanity of their world.

Soon after, the survivors hear a wailing off in the distance. Working up their courage, they go off to investigate and find a massive wailing fire, the scope of which chips away at their mental fortitude. The survivors continue to search for a full grown antelope to kill, but a careless moment sees Artemis falls into a pit and suffer a wound to her chest. As the long hunt drags on, the survivors are suddenly surrounded by an overwhelming darkness.

In the darkness, Artemis is attacked by an unseen monster that gives her another wound to her chest. Zeus attempts to help, but lashing out in the darkness randomly he only harms his companions. Aphrodite suffers from crippling doubt about the outcome of the hunt, causing her to hesitate in uncertainty (-1 speed token for the showdown). Athena II, on the other hand, finds the pitch blackness calming, and finds peace, her insanity washing away in the calm. This does, however, cause her to doubt the wisdom of using the weapon taken from the butcher, so she would not use it against the antelope.

The overwhelming darkness eventually fades, and the survivors press on. In yet another misstep, Artemis wanders into a nest and is covered in a carpet of ticks. It takes all of her considerable will to survive to fight off the blood sucking parasites (her survival is reduced to zero). Thankfully, after a long and harrowing hunt, the survivors finally locate a fully mature screaming antelope, grazing on acanthus near some fallen stone columns.

(To sum up, Artemis now has a heavy chest wound already, and has no survival. I would need to be careful with her if she was to survive. Athena II of course lost all her insanity so she wouldn't be able to use my strongest weapon, the butcher cleaver. Artemis, with my second best weapon the scrap sword, would be at -1 speed for the showdown. The hunt phase had put me at a significant disadvantage going into my first showdown with a level 2 monster. I spent quite some time thinking about how to position the columns and my survivors, hoping it's first AI card would move it towards the only survivor it could see, then the trample ability would bring it the rest of the way to the board edge, between the two sets of survivors within reach of all of them to get attacks in and be able to dash back behind other columns. That didn't quite work out the way I intended, as the antelope decided to start out by grazing instead of moving toward us.) 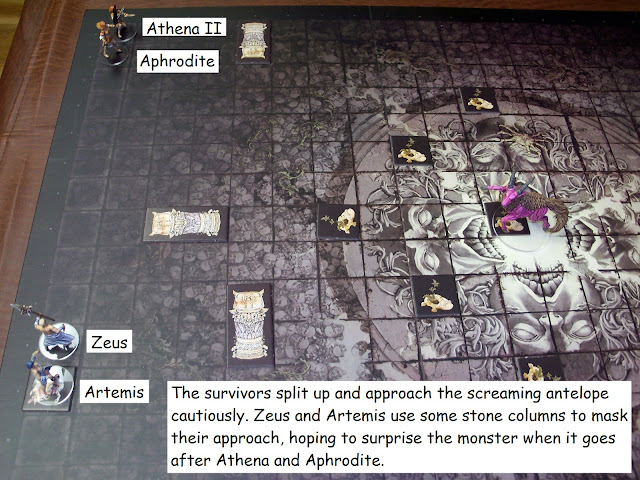 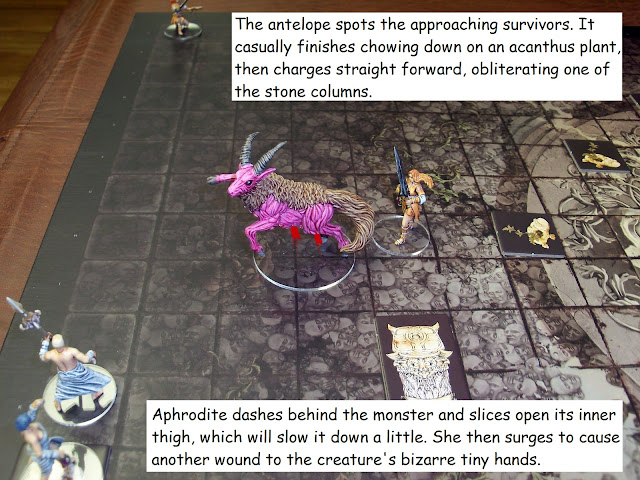 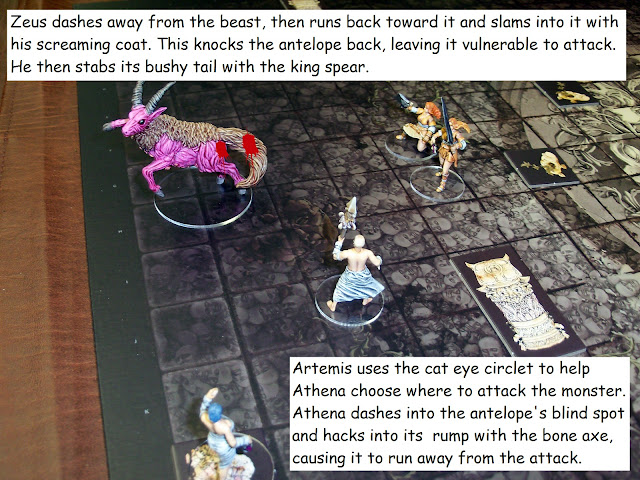 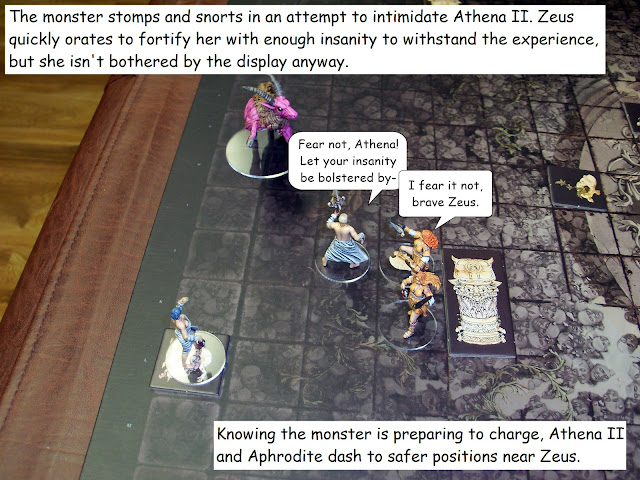 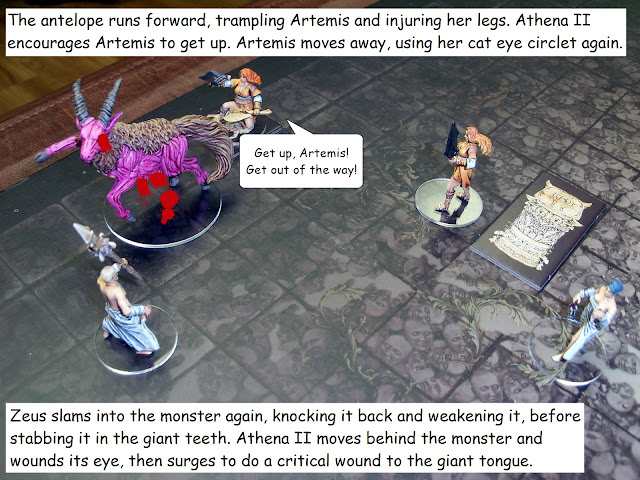 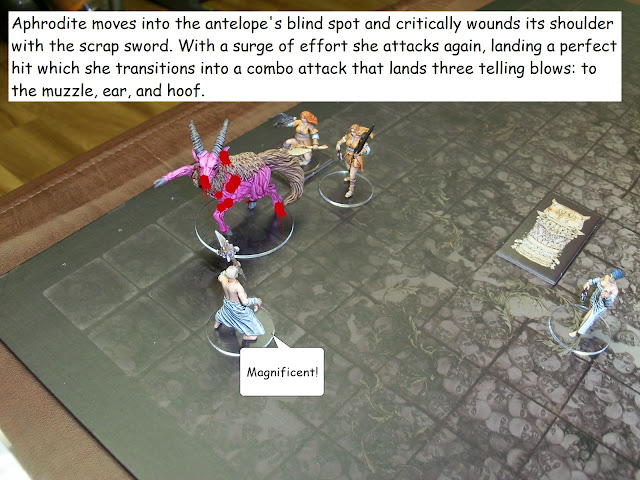 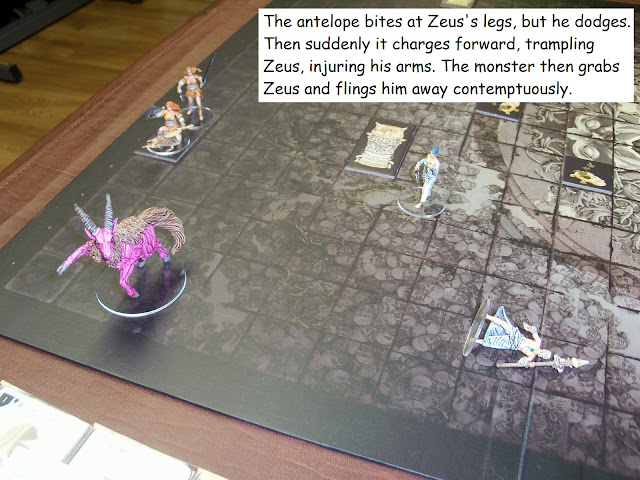 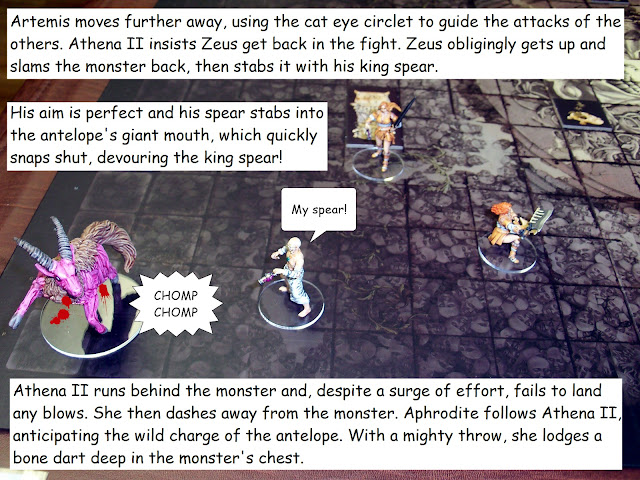 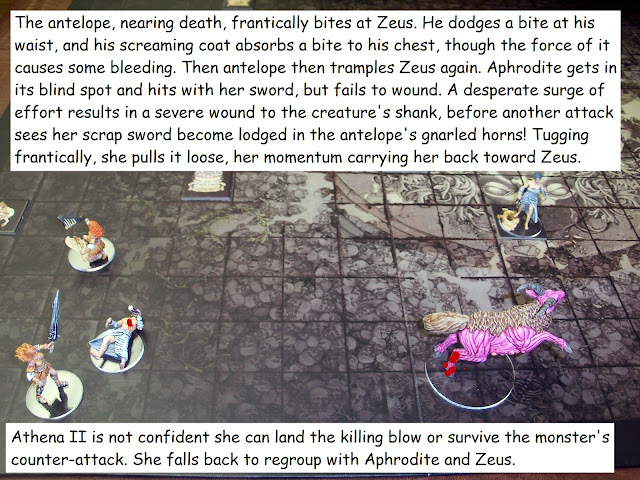 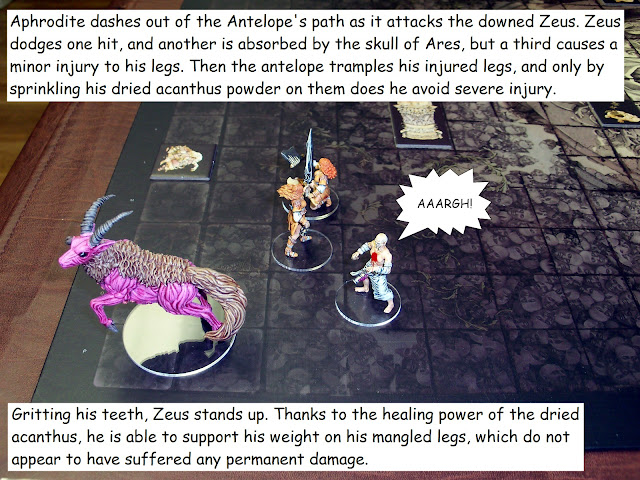 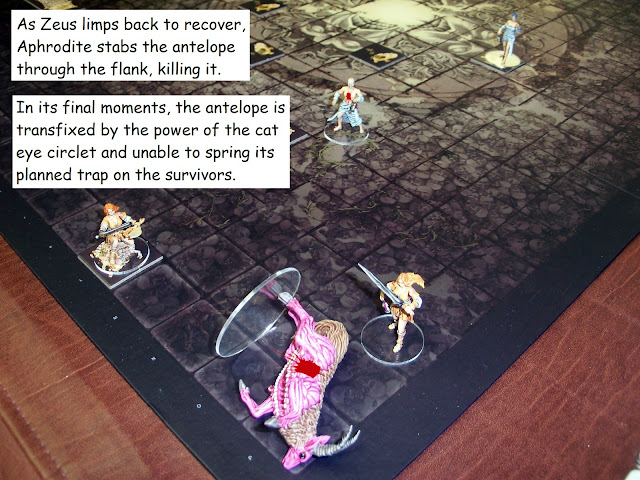 Feeling fortunate to have avoided any permanent injuries, the survivors loot the monster's corpse, and are happy to end up with a larger share of resources than they had been getting from the young antelopes they had been hunting. Hunting the older antelope results in increased reward, but perhaps not enough to compensate for the heightened risk. As a result of the fight, Artemis gains a willingness to continue fighting when all others have fallen (gains Last Man Standing fighting art with Age milestone). Aphrodite sees her practice with the scrap sword pay off, and her skill with the weapon now marks her out as a sword specialist.

As they return to the settlement ready to endeavor to improve it, the returning survivors discover an Elder Council has been called. They convince one of the elders to tell a story from long ago, and he recalls a story about a bizarre lion in mourning. The idea is planted that someday the survivors may attempt to hunt down this legendary Beast of Sorrow, but for now they consider it well beyond their ability to defeat. Shortly after the council, a mysterious hooded knight shows up wielding a twilight sword and challenges Dionysus to a duel. Dionysus fares badly against the stranger, suffering a gaping chest wound in the exchange (-1 permanent strength), though the stranger spares his life. Having tested Dionysus and found him in need of more practice, the hooded stranger leaves without further comment.

The survivors endeavor to innovate and, realizing that the story told by the elder at the council was something they should do more of, the survivors innovate storytelling and start routinely telling stories, which further increases their will to survive (+1 survival limit). With their haul of resources they add to their screaming armor by crafting screaming bracers, screaming horns, and a screaming skirt. Also, needing another weapon with a long reach after the king spear was devoured, the survivors create a counter-weighted axe. Wanting another ranged attack option they also craft a cat gut bow along with a claw head arrow.

Before preparing to depart on another hunt, the survivors perform the armor ritual at their shrine, and all feel more resilient as a result of their devotions (gain +1 armor to all hit locations for all departing survivors). Helen endeavors to glean the meaning of existence, but the effort only increases her will to survive long enough to learn more (+1 survival). Then Helen, Hera, Hades, and the red savior Icarus gear up quickly to confront a threat approaching their settlement. As they reach the outskirts of the settlement they find one of the armored strangers who previously came to Olympus to execute Ares. With a desire to avenge the fallen Ares filling their hearts, the four survivors approach the menacing form of the king's man.
Posted by Craig Welter at 8:00 AM