Artemis, Apollo, Hephaestus, and Athena II leave Olympus to search for an adult (level 2) screaming antelope. Artemis wears a full set of rawhide armor and is armed with the catgut bow and a special claw head arrow. Apollo also wears full rawhide armor and wields the scrap sword, with bone darts for ranged backup. Hephaestus wears only a cloth around his waist and a screaming horn helmet over his cat eye circlet. He carries both the butcher cleaver and the bone axe (as a backup, in case he chickens out of wielding the sentient cleaver). Athena II wears a screaming skirt, coat, and braces, along with the skull helm (the skull of the late Ares), and carries the counterweighted axe.

Immediately after departing, the hunters find evidence of a mass migration of antelopes (monster is moved 3 spaces away from the survivors). There is no trace of any remaining antelope populations anywhere they have found them before, and they resign themselves to a potentially long hunt. As they range farther from their settlement, suddenly the ground begins to shift beneath their feet, before rising into the air beneath them! The survivors find themselves on the back of a gigantic creature. They all hang on like their lives depend on it (which they very well may) as the massive creature begins to move. In a stroke of amazing luck, or perhaps destiny, the giant carries them to a far off plain full of grazing antelopes.

The survivors are able to dismount safely. They use the distraction afforded by the giant creature to sneak up on one of the adult antelopes without it noticing them, and set up an ambush. 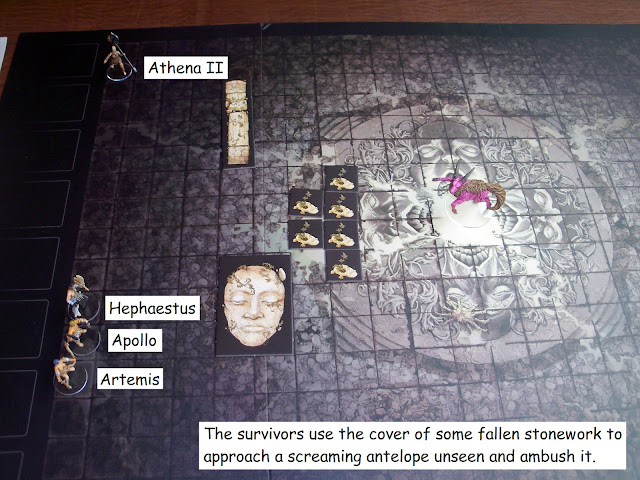 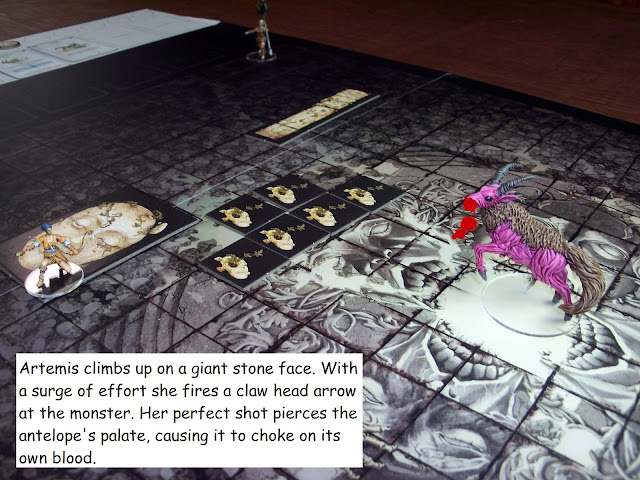 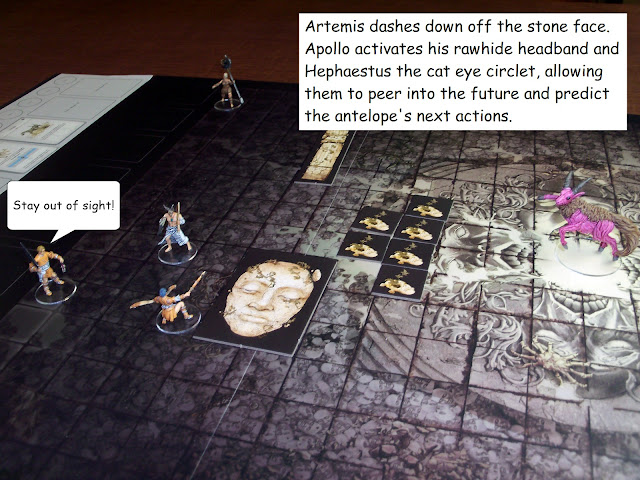 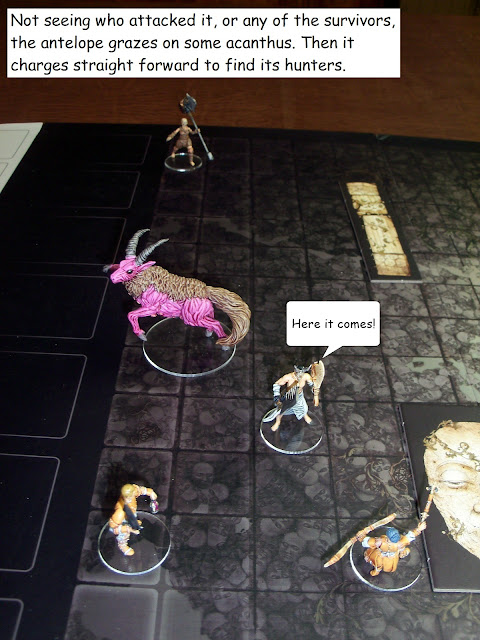 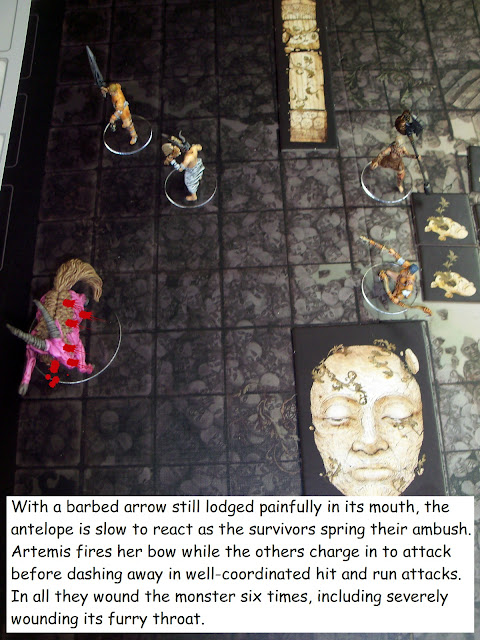 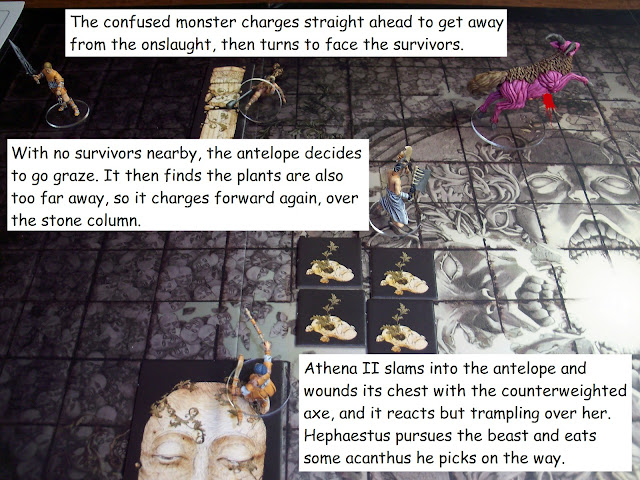 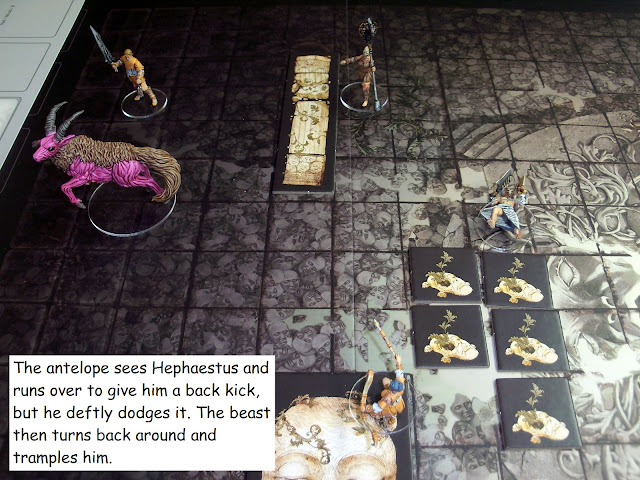 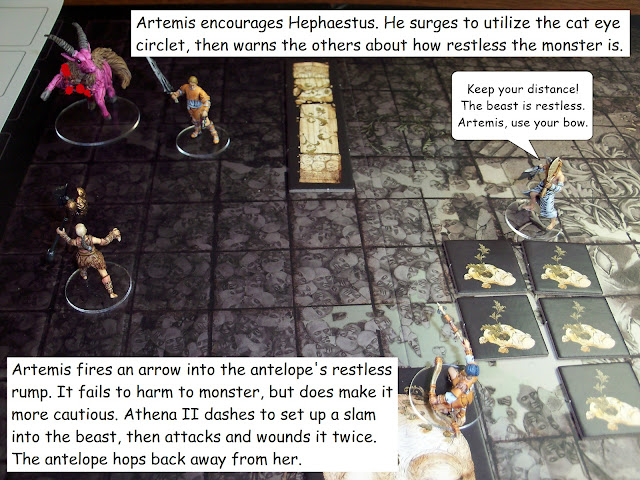 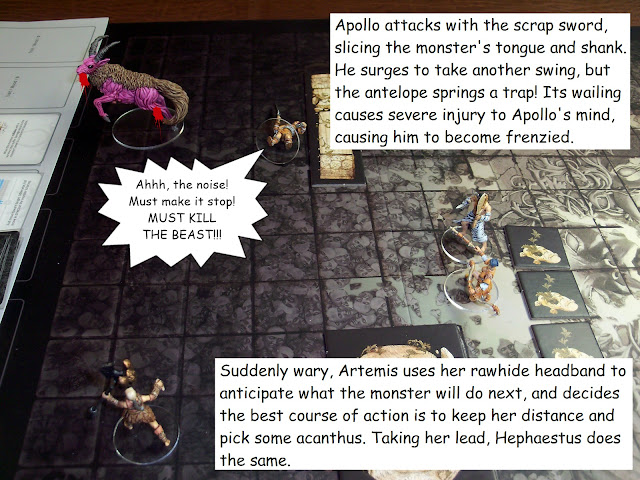 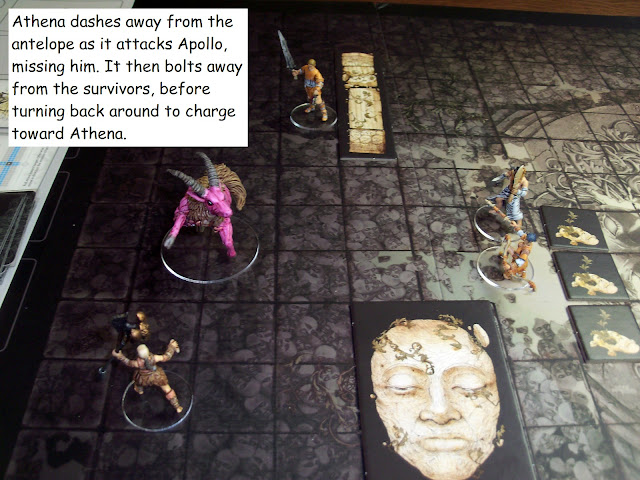 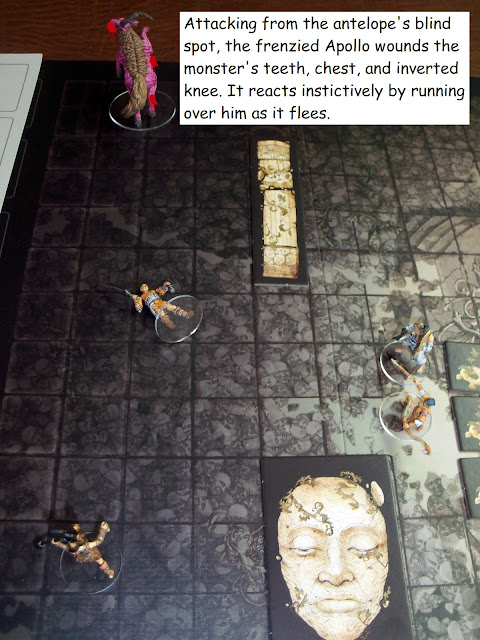 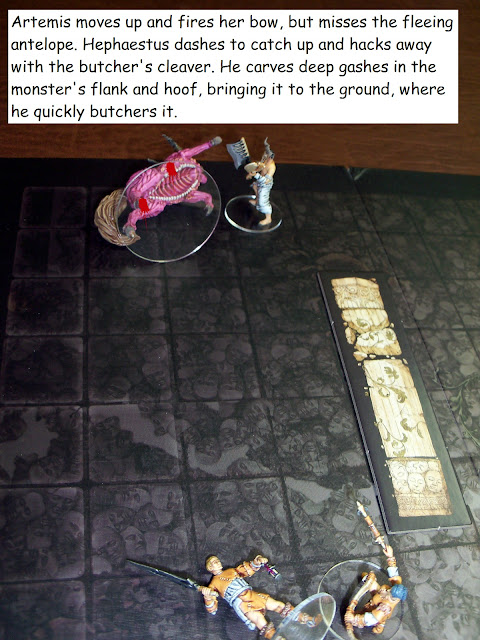 After the extremely well-executed showdown, Athena II feels much more confident in her skills with an axe (gained axe specialist proficiency) and Apollo feels more confident in his leadership skills (gained Leader fighting art from age milestone). They make the long journey back to Olympus with their haul of resources, including some fresh acanthus. When they arrive back home, the settlement is in the midst of yet another elder council, where the elders of the settlement gather to reminisce. The people of Olympus certainly like to tell stories.

As the council concludes, Olympus is graced with a regal visit. A being, whom they instinctively know is called "The Hand", strides into the settlement. The survivors's thoughts vanish as they fall to their knees, struck dumb by its glorious, incomprehensible presence. Sensing and admiring the survivors's acceptance of the world's darkness, The Hand presents 2 infants to the kneeling survivors to raise as their own. It then departs without explanation.

Afterward, the survivors innovate the method to create ammonia (finally). They also craft a pair of screaming leg warmers to complete their set of screaming antelope armor. Zeus then gathers the survivors together to entertain them with a Tale as Old as Time. In the middle of his story, a large and bizarrely dressed woman (a white speaker) shows up and offers to share a story of her own. She tells them the Story of the Forsaker. While she tells her story, a survivor mysteriously disappears from the settlement, and in their place is a strange mask (the Forsaker Mask). As the story concludes, the White Speaker departs just as quickly and unceremoniously as she arrived.

The survivors considered creating a leather crafter using the newly gained knowledge of ammonia, but knew they wouldn't have enough hides left over to make any use of it. They therefore decided to store their resources while they built up enough to do something useful. With the upkeep of the settlement concluded, Zeus, Artemis, Apollo, and Demeter (daughter of Athena II) select their gear and prepare to go out on a hunt. Before leaving the perform the armor ritual at their shrine, their devotions increasing their innate resilience. They then depart on their next hunt.
Posted by Craig Welter at 8:00 AM