Zeus, Demeter, Apollo, and Artemis depart Olympus in search of the legendary Beast of Sorrow, described in a story told by one of the elders of the settlement. They aren't even sure if the beast really exists, but if it does, they are determined to find it. They have prepared themselves for a potentially long hunt.

Zeus wears the screaming armor and forsaker mask and is armed with a counterweighted axe. Demeter and Apollo both wear full suits of rawhide armor, Demeter carrying a bone axe and butcher cleaver while Apollo is armed with a scrap sword. Artemis is protected only by a simple cloth around her waist, and the skull helmet fashioned from the skull of Areas. She carries the cat gut bow along with a claw head arrow, and also wears the cat eye circlet.

On their journey the survivors gain some understanding from gazing at a sculpture of a lion, then find a fountain in the shape of a lion face and drink its clear, pure water (Gain 1 courage and 1 survival). As they attempt to track their quarry they find some territory marked by the beast. There Artemis recognizes one of the stone faces underfoot as being the face of long lost Ares, whose skull she wears as a helmet. Bittersweet memories of the death of brave Ares bring her to tears (reduce insanity to 0 and gain +1 understanding).

Later the survivors come upon a faceless statue holding a lantern. They spend some time just basking in the warm glow of the lantern's light (+1 survival). Meanwhile, unbeknownst to them, the Beast of Sorrow has caught their scent, and is aware that a group of survivors is hunting it. It moves closer in an attempt to outmaneuver them. As the survivors eventually depart from the faceless statue (actually rolled that same event twice in a row), a sinkhole opens up under Artemis. She is able to scramble out and avoid death, but her waist cloth is torn off in the process, leaving her completely naked but for her skull helmet.

As they move away from the pleasant light of the statue, the hunters begin to suffer from a sense of overwhelming darkness. Apollo panics and lashes out in the darkness, hitting his comrades. Demeter and Artemis, however, remain hopeful about the outcome of the hunt (+1 insanity, +1 courage). Zeus remains stoic, finding peace in the blackness (lose all insanity), which leaves him somewhat vulnerable to the mental traumas that undoubtedly lay ahead.

Seeing the others cope so much better than he with the situation, Apollo is overcome with a crippling misery and loneliness (2 brain event damage). He perseveres, and the survivors start to feel like they are nearing the object of their journey when they discover a lion's scratching grounds. Artemis investigates further, finding a lion claw. That night, the terrible screeching of a lion in heat keep the survivors awake (1 brain damage). They reason they must be very close to their objective, when they again come upon a faceless statue holding a glowing lantern. At first they worry they may have gotten lost and gone in a big circle, but as soon as they have left the statue behind they finally find the legendary Beast of Sorrow. 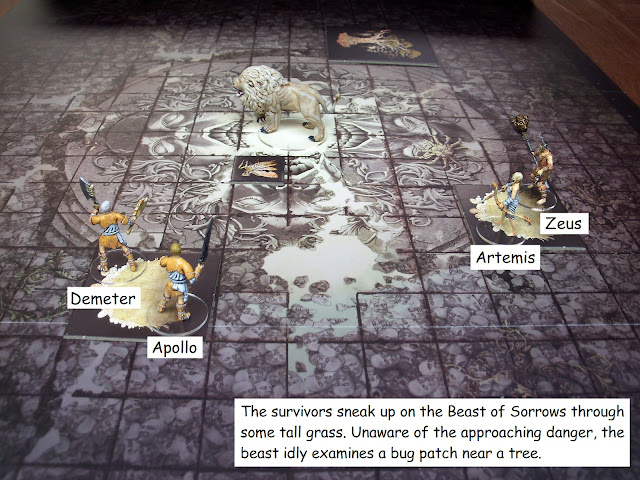 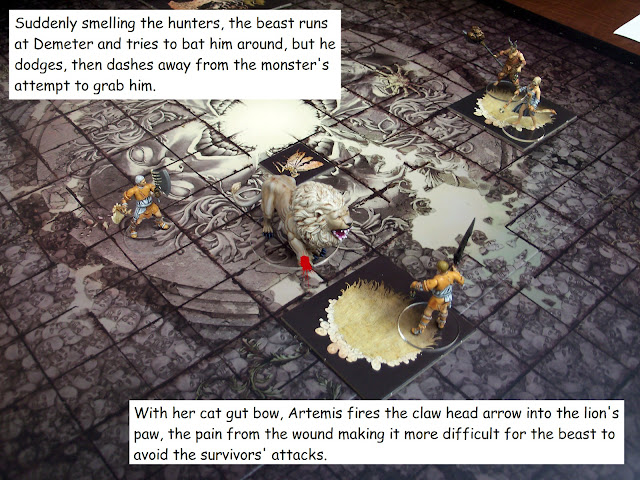 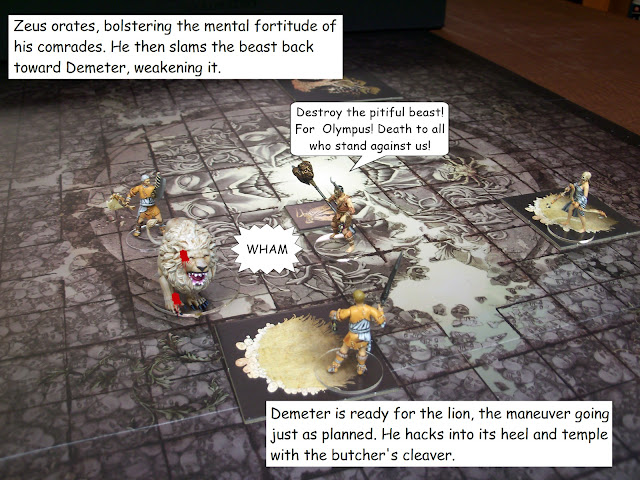 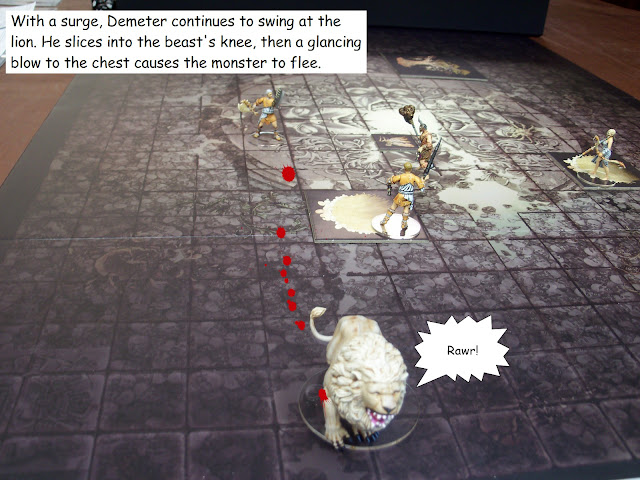 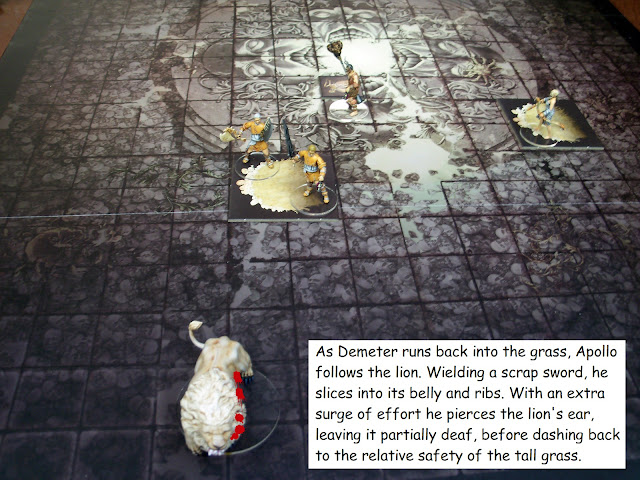 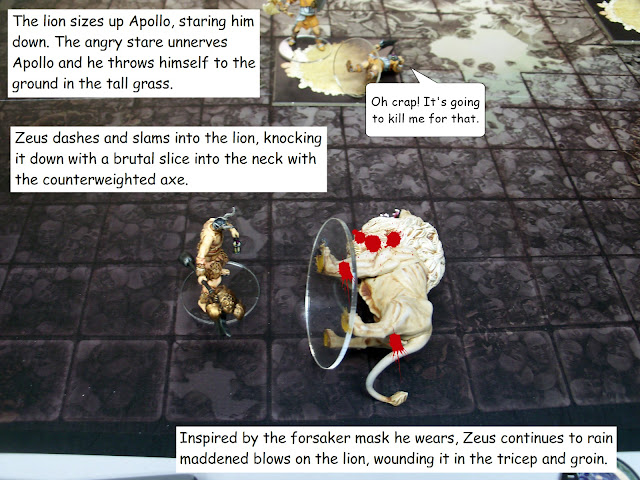 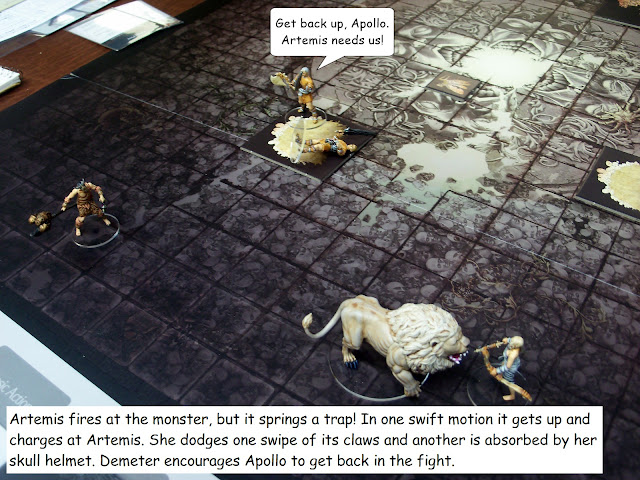 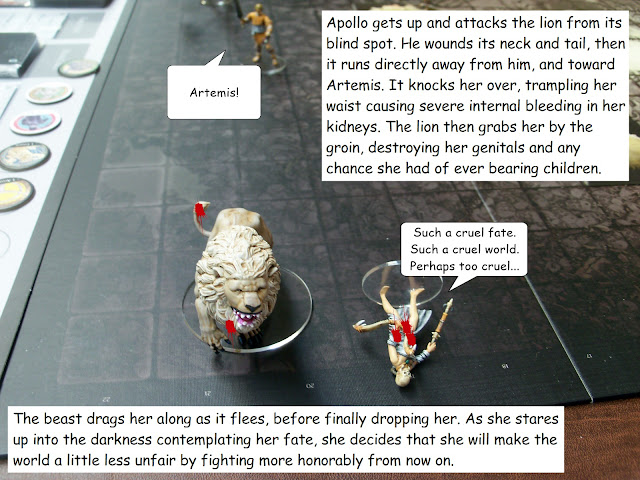 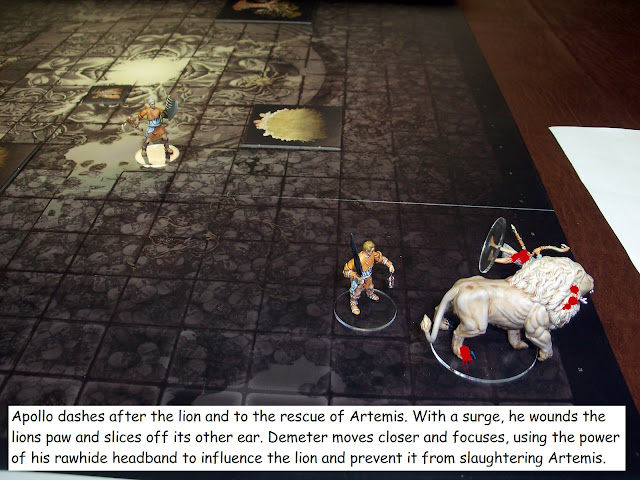 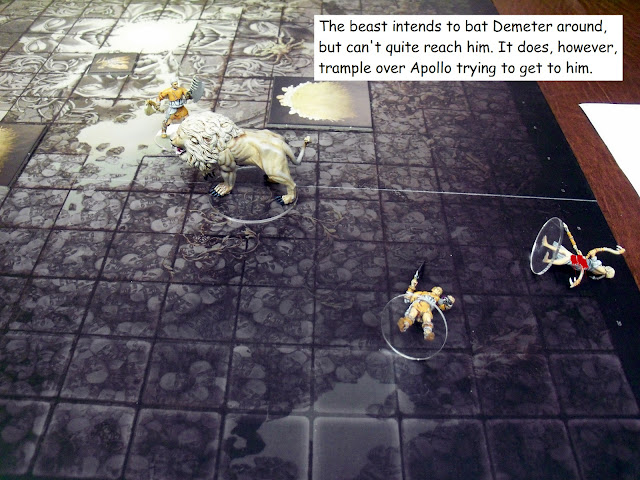 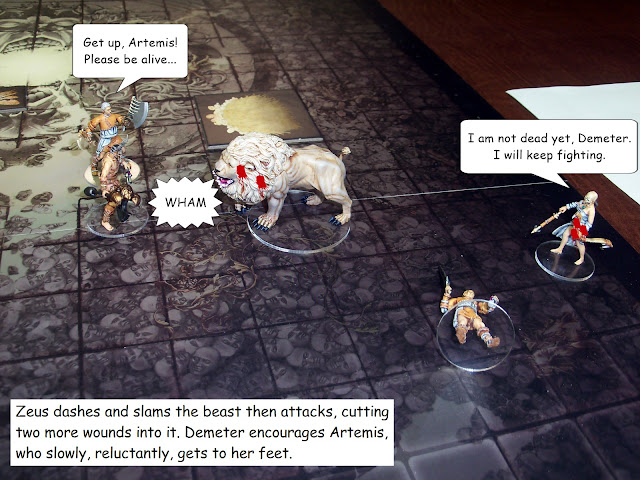 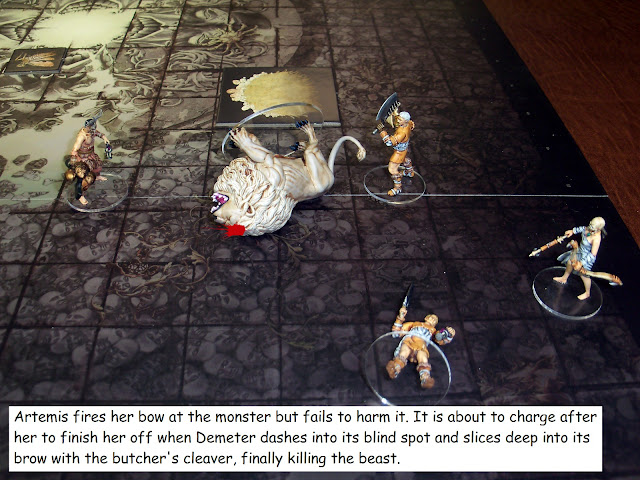 For landing the killing blow, Demeter learns the Thrill Seeker fighting art. Zeus ages and gains +1 movement. The survivors get a large haul of resources from the corpse of the old lion and head back to Olympus. Olympus suffers from a heat wave, and the furs Zeus wears cause him to overheat and require some time to recover (must skip next hunt). The entire settlement gathers, sensing that the time has come to make an important choice about how they will proceed.

The Olympians know they must master the darkness around them, so they choose to embrace barbarism, and reject any feelings of romanticism or idealism. Athena II argues most passionately for this course of action and, as a result of rallying the entire settlement to her point of view, she feels her courage surge, and begins to believe she can call the thunder. In a moment of clarity, Athena II also sees the truth: she recalls meeting a strange masked man who, for a moment, opened her second eye lids. What she saw in that fateful moment fills her mouth with the taste of her own death. She is driven blind in one eye, but the sour taste of her death only increases her determination to fight back against her fate (she may now encourage herself, and gets +1 strength token when she does).

The survivors endeavor to innovate and create a hall of records where they can study the accumulated knowledge of Olympus. Dionysus examines all the settlements records, and the accumulated knowledge will allow him to better inspire his fellow survivors in battle (gained the Orator of Death fighting art). Apollo scavenges the outskirts of the settlement for some scrap, and the long walk bolsters his courage. Then Apollo, Hades, Athena II and Dionysus prepare for the next hunt, Athena eager to try calling out to the thunder out in the wilderness. Before leaving they perform the armor ritual at their shrine, increasing the effectiveness of their armor (+1 armor to all hit locations).
Posted by Craig Welter at 8:00 AM