Athena II, Dionysus, Hades, and Apollo depart in search of a mature (level 2) screaming antelope. Athena wears the full suit of antelope armor and wields the counterweighted axe. Dionysus wears the skull helmet fashioned from the skull of Ares, along with the forsaker mask and cat eye circlet. He also wears a cloth draped around his waist. He wields his twilight sword and also carries a cat gut bow and claw head arrow. Hades and Apollo wear the suits of rawhide armor. Hades is armed with both the butcher's cleaver and bone axe, while Apollo carries the scrap sword.

The survivors immediately encounter a dead antelope, but find no signs of any living antelopes nearby. They next discover a huge, grimacing stone face with lava flowing from the eyes. Its gritted teeth appear to hold a worn sword. Athena braves the lava to grab the old sword, which they call the adventure sword. Then the survivors find themselves distracted by a dark crack in the stone face floor. Hades is unable to tear himself away and stoops to gaze into the depths until the other survivors drag him away. Whatever he glimpsed changes him forever (gain a random disorder), turning him into a rage-aholic.

The hunting party finds evidence of a massive migration of antelopes, indicating that it may be a long time before they encounter their quarry. As they continue, the ground ahead is pockmarked with pools filled with a gooey liquid. The pools bubble merrily and stink of digesting meat. As the survivors move between the pools, they are overcome by waves of nausea. Both Hades and Apollo vomit into a nearby pool and witness the pool greedily dissolve their vomit.(1 damage to the body and gain +1 understanding). Proceeding into a vast plain, the survivors are confronted by a massive wall of flame. Beyond it lies a path of destruction. The devastation will make their journey through this area particularly chaotic and eventful.

The survivors meet a traveling Mask Salesman on the road. He insists that he has special wares to offer. The salesman silently points at Dionysus. Instinctively, Dionysus hands the salesman his waist cloth in exchange for the Man Mask. As they continue down the road, one stone face in the sea of many catches Hades' eye. He investigates (+1 courage) The face reminds him of someone dear, and his heart aches with loneliness. (1 brain damage). The survivors then continue their journey into an area of overwhelming darkness.

In the darkness, Apollo boldly walks into a giant monster's maw and just barely leaps out in time to avoid being eaten (lose all survival). Athena envisions a strange fruit that pulses with her heartbeat. She smashes it, and the experience nearly causes her to drop dead (lose all survival). Fearing what terrible things lie in the darkness, both Dionysus and Hades lash out randomly, but only manage to harm their companions.

They eventually emerge into a relatively lighted area, where the landscape is dotted with large red mounds oozing oil. The smallest spark threatens to ignite the foul-smelling mounds, but thankfully they do not ignite. Then a valley of sharp white stones opens before the survivors like a toothy maw. As the survivors push and climb through the jagged spires, they find even the shallowest cuts bleed without stopping. Athena and Apollo both suffer cut's that just won't stop bleeding (1 body damage and 2 bleeding tokens).

The survivors exit the valley and continue their hunt. They come across the shattered ruins of a small settlement. Scattered corpses dot the ruins, disintegrating at the merest touch. An extinguished lantern oven stands intact at the center of the settlement. Dionysus harvests a broken lantern from the remains before moving on. The noise alerts the antelope they have been tracking, and the panicked monster moves further away from the approaching survivors.

As they finally near their elusive quarry, four lanterns lay discarded in the survivors' path. Dionysus and Hades ponder who left the lanterns and why (1 brain damage), but they all turn out to be useless junk. Then, amidst the endless stone faces, Apollo notices an unusual object on the ground. He finds a weathered purple stone with a swirling texture. It is shockingly heavy. Mesmerized by the stone, Apollo hides it from the other survivors and brings it with him (-1 movement token). Despite the distractions, the survivors finally spot the object of their hunt, using some fallen stone columns as cover to approach it unseen. 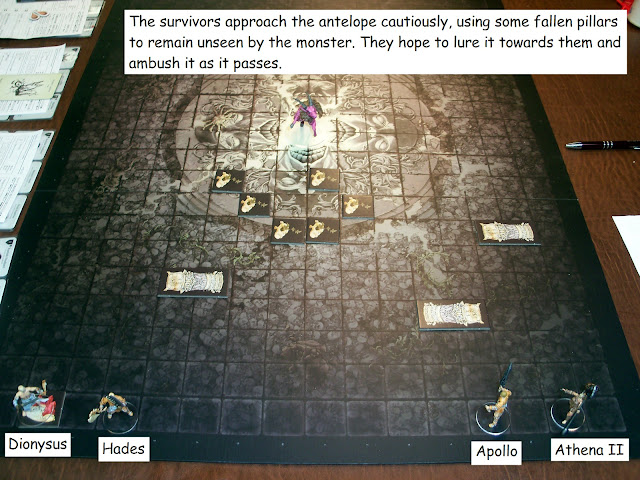 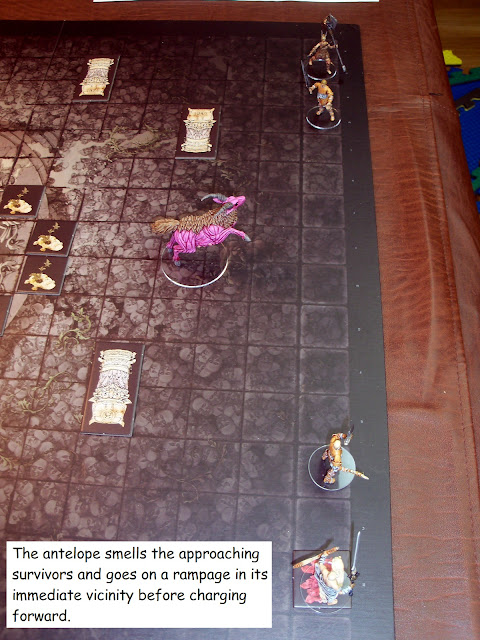 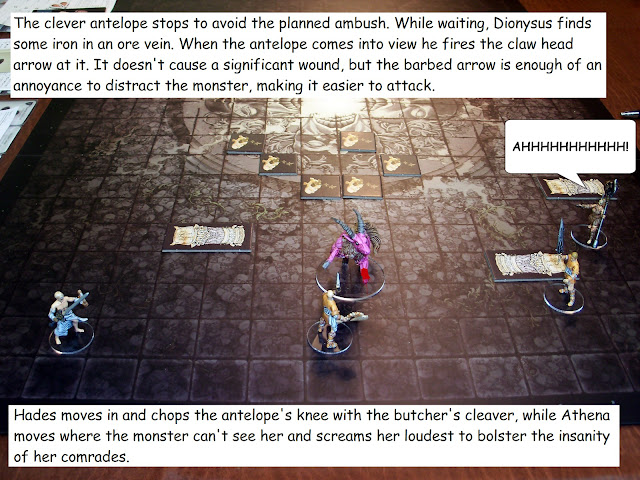 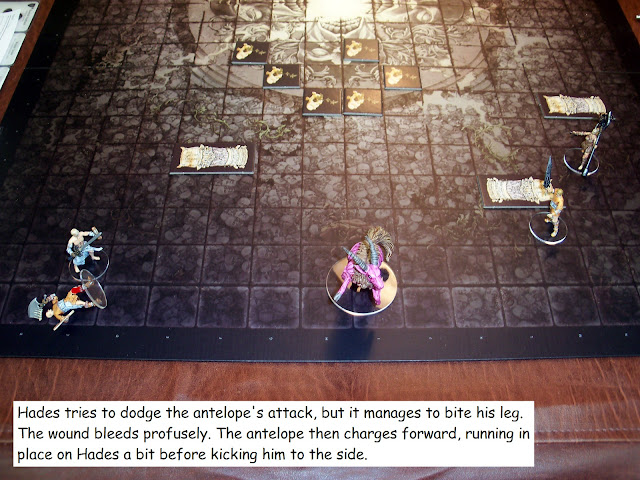 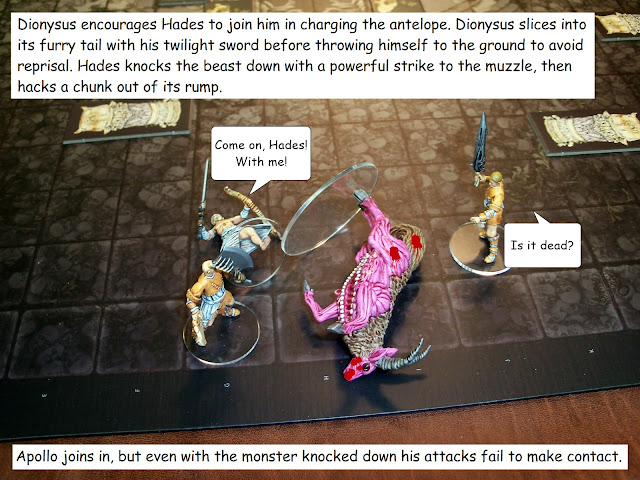 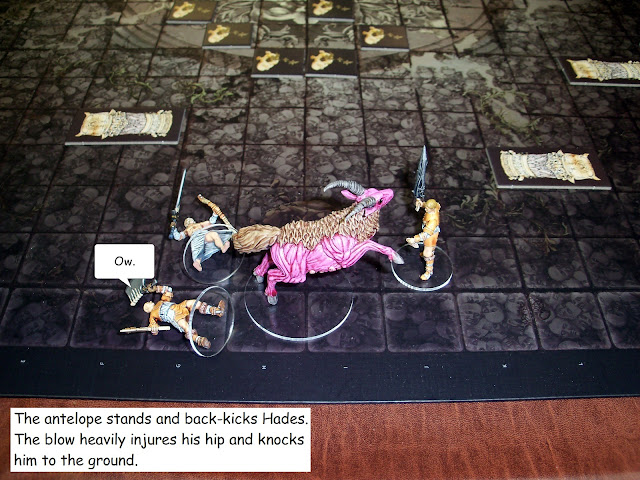 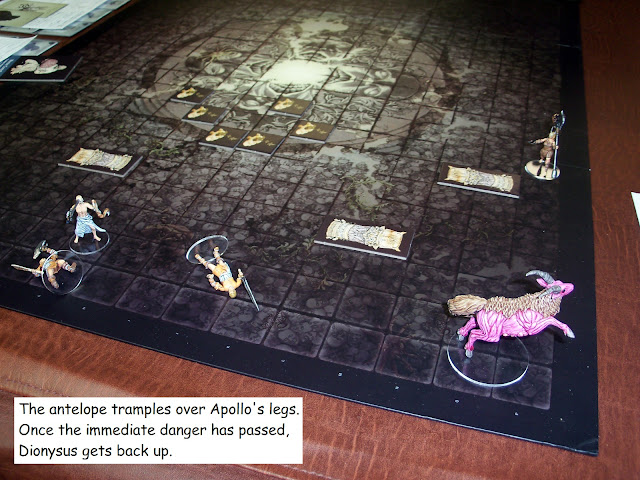 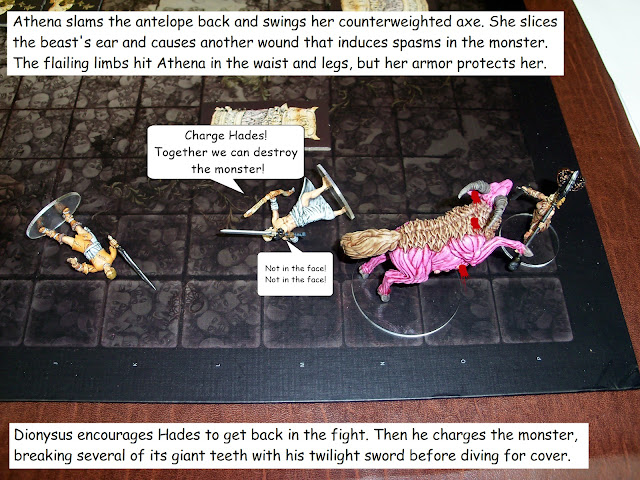 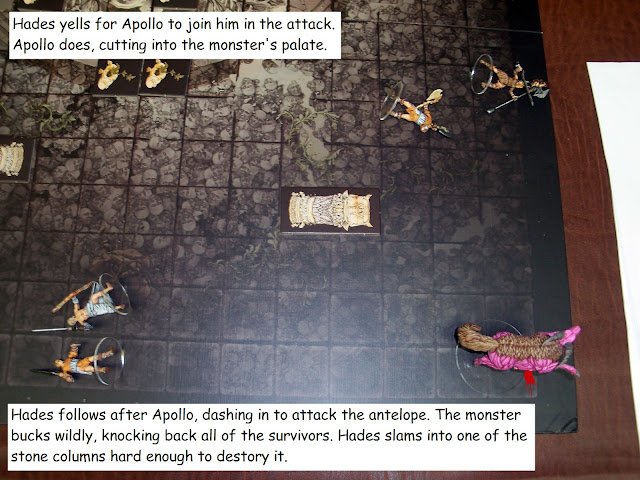 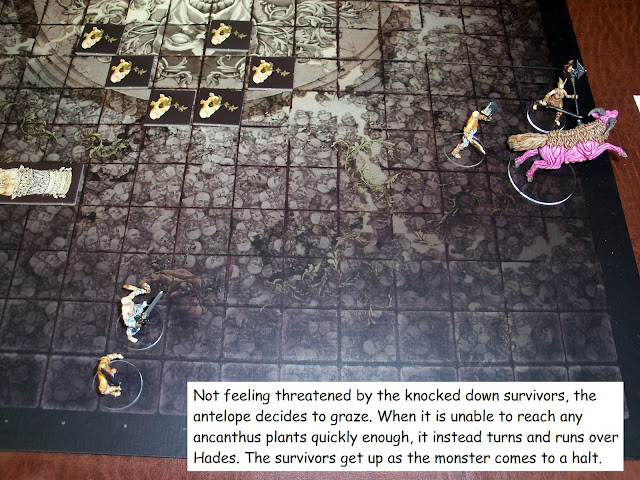 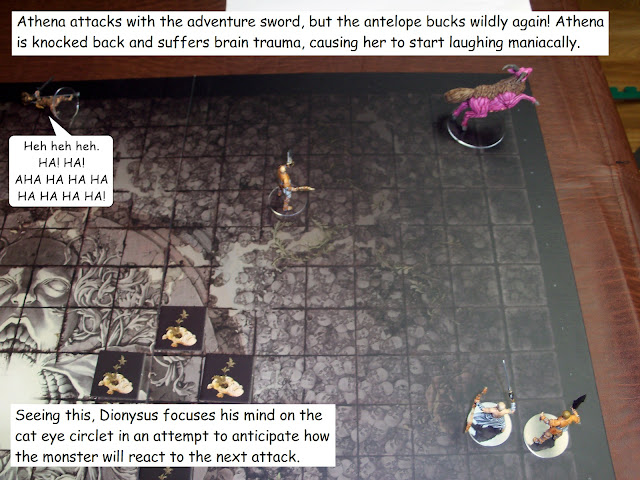 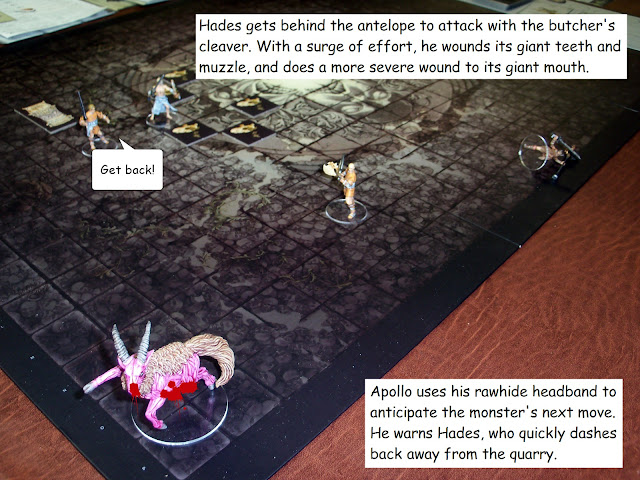 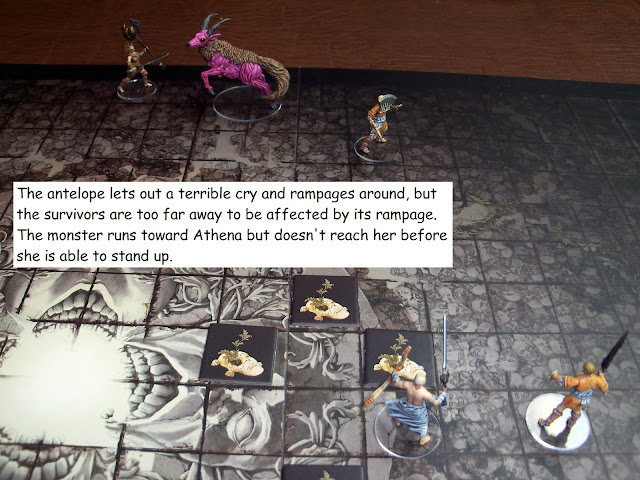 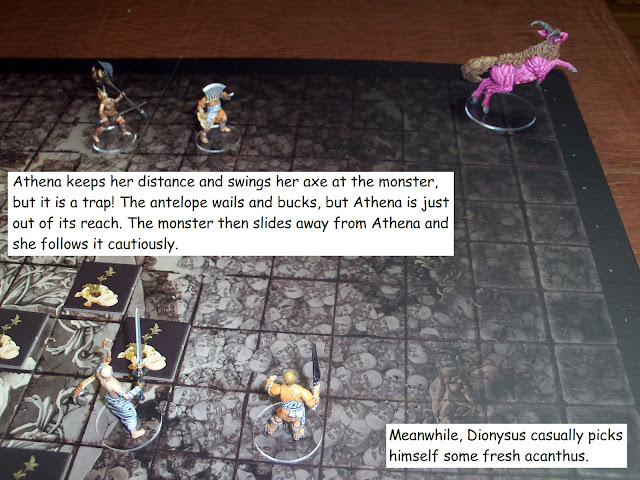 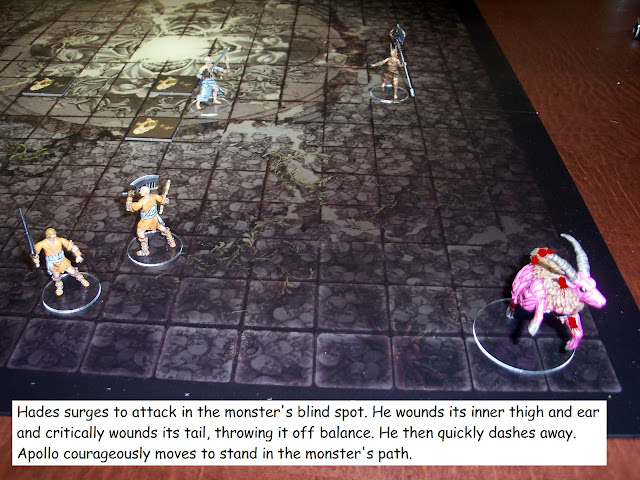 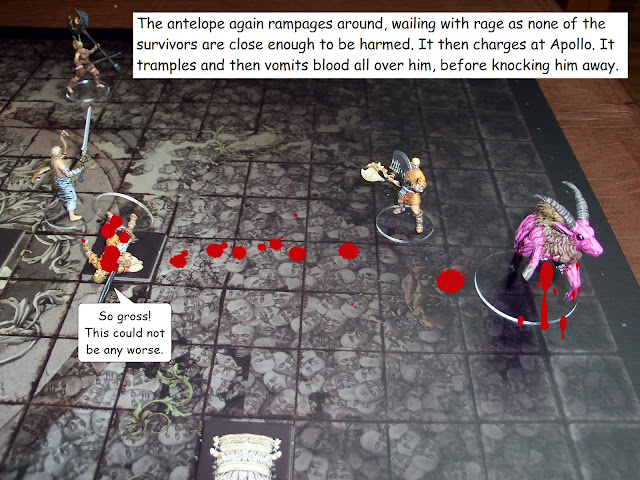 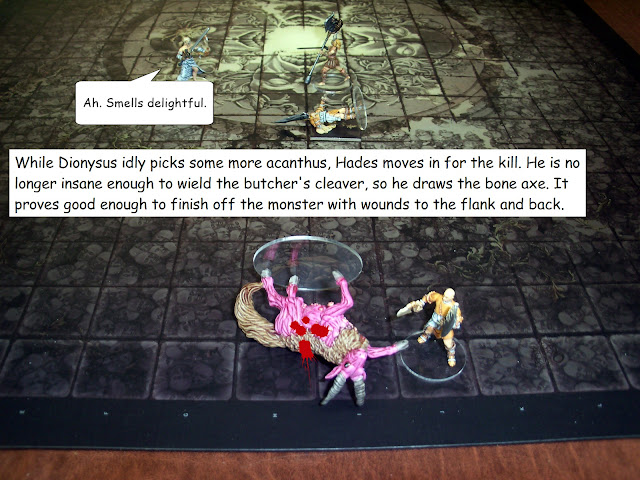 From her experience, Athena II learns the Strategist fighting art. The survivors take their large haul of resources and return to Olympus for an eventful year. The settlement holds another Elder Council, which ends up being just a waste of time (a retired survivor goes on the next hunt, but I have no retired survivors). Then a hooded knight shows up to duel with Dionysus. Though he has gotten more practice with his twilight sword since his last duel, Dionysus allows his nerves to get the best of him and fails utterly (rolled a 1). The hooded stranger bests Dionysus easily and leaves him with yet another large gaping chest wound (-1 strength).

The entire settlement then gathers for a lantern branding feast, which gets way out of control. The survivors consume, destroy, or waste fully half of the resources in the settlement! (This cost me 27 resources!) In the process, Demeter gets branded by a hot lantern (gaining +1 strength) on a dare to take the hot lantern challenge. After everyone has recovered from the raucous event, the survivors get back to work.

They endeavor to innovate and invent drums. Apollo endeavors to glean the meaning of existence, and decides that what really matters is intimacy. So he gets intimate with another survivor, who gives birth to a child. Apollo then takes up playing the newly invented drums and his rhythmic beats really appeal to Athena II. Owing to the therapeutic effect of the music, she finds herself no longer suffering from crippling indecision.

The survivors receive word that a mysterious and sinister figure approaches the settlement. Hades, Hera, Apollo, are chosen to confront this threat and quickly grab some gear. Some of the best weapons are left behind, however, so as not to risk losing them to this unknown threat. With their success and survival very much in doubt, the survivors stop to pray at the shrine (+1 armor to all locations) on their way out to face The Hand.
Posted by Craig Welter at 8:00 AM