The Hand returns to Olympus. Apollo, Hera, Aphrodite, and Artemis gear up to face the being, who waits for them on the outskirts of the settlement. Apollo wears a full suit of screaming armor and a man mask, and wields a scrap sword and beacon shield. Hera wears rawhide armor and a forsaker mask and carries the other beacon shield. Aphrodite also wears rawhide armor and carries bandages and a founding stone. Artemis is armed with a cat gut bow and counterweighted axe, put a skull helm is her only armor. She also wears the cat eye circlet.

This is the settlement's second time facing The Hand, and the survivors are planning a very different strategy this time. They will use their rawhide headbands to predict what the monster will do and try to control who it will attack. Apollo and Hera will try to absorb most of The Hand's attacks with their beacon shields. They will attempt to outlast The Hand, trying to survive his attacks as best they can until the creature tires of testing them and leaves. Most of their resources have been spent constructing the heavy beacon shields for just this purpose, and they hope it has been worth the effort. 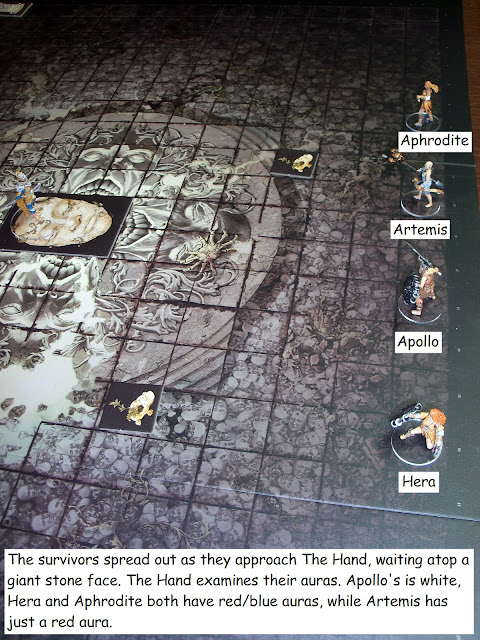 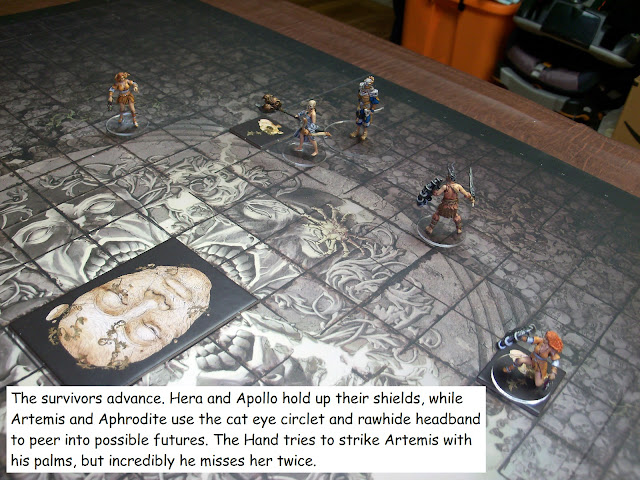 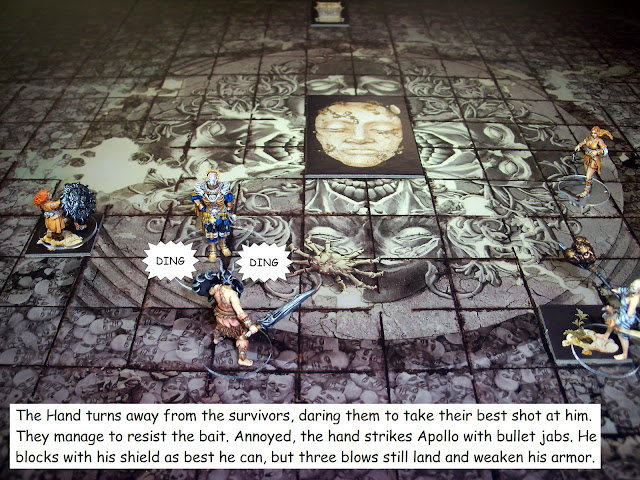 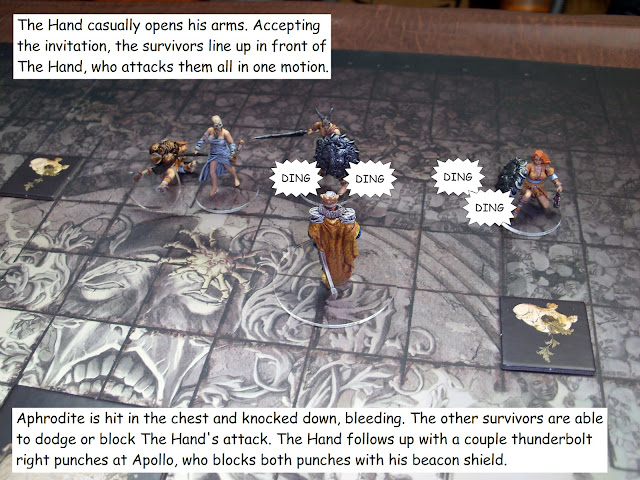 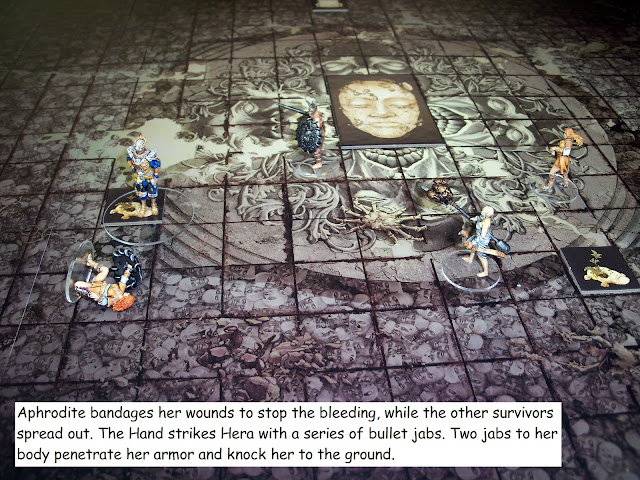 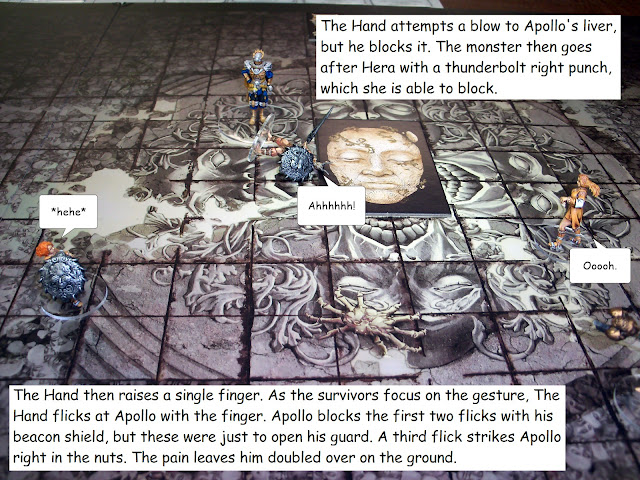 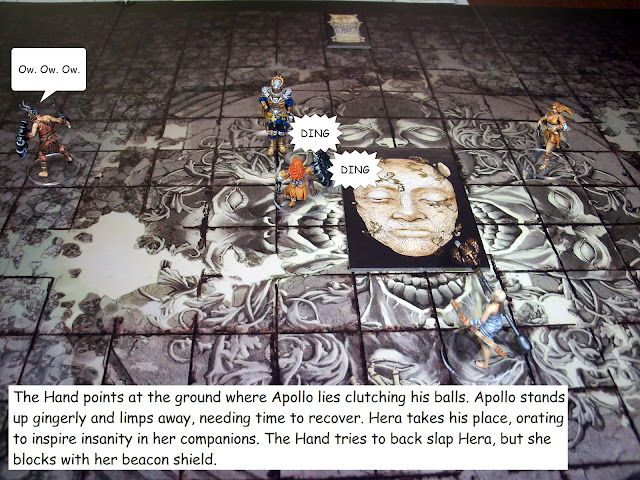 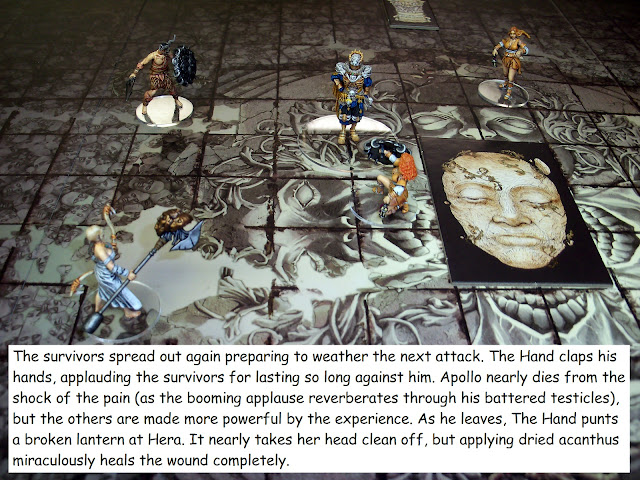 The survivors return triumphantly to Olympus having survived their encounter with The Hand. They decide to celebrate their victory by competing against each other in a triathlon (OF DEATH!). Hera and Aphrodite tie for first place in a race. Apollo and Artemis tie for 1st place in debate. Aphrodite comes in last and the crushing disappointment of the defeat causes her to develop severe apathy. Aphrodite and Hera tie for first in contest of strength. Apollo comes in third, his injuries putting him at a bit of a disadvantage. Artemis comes in last in the strength contest, and in the process suffers a dismembered arm, preventing her from using her bow or any other two handed weapon.

Apollo's victory in the debate causes him to gain some understanding, giving him greater insight into the nightmare world around him (he gains an extra endeavor from the roll on the Insight event). Having spent most of their resources on their two beacon shields, and not getting any from the fight with The Hand, the survivors are unable to do any crafting or innovating. But they endeavor to improve their situation in other ways.

Icarus plays bone beats on the drums. His music is so good that it cures Aphrodite of her profound apathy. Dionysus paints a founders eye design on himself (+1 to intimacy rolls this settlement phase). Apollo applies his recent insight to play matchmaker for Dionysus, setting him up with a nice (no-name) girl from the settlement. They conceive a child, and the woman gives birth to a healthy son who inherits some of Dionysus's skill with a twilight sword.

Aphrodite scavenges out where the darkness encroaches Olympus and finds a broken lantern, perhaps the very one that nearly took Hera's head off when The Hand kicked it at her. The Olympians then purify some of their scrap into a single piece of iron. They realize it will take a much greater source of scrap and iron, and a lot more leather, to create any useful armor at the blacksmith. But for now, Zeus has decided it is time to try hunting the mysterious Phoenix.

Having no idea what to expect, Zeus assembles a team of strong, core survivors, though he is careful to pick those who are not critical to the survival of the settlement. They also leave behind most of the unrecoverable gear that is considered too important to risk. Yet Zeus, Athena II, Icarus, and Aphrodite form a strong party of hunters at the depart to hunt down their first Phoenix.
Posted by Craig Welter at 8:00 AM