Dionysus wears full rawhide armor and carries his twilight sword and a beacon shield. Helen is still cursed with the regal gauntlets that can not be removed, and also wears a skull helm, lantern greaves, lantern mail, and lantern cuirass. She is armed with a counterweighted axe. Athena II wears screaming armor and a cat eye circlet, and is armed with the butcher's cleaver. Aphrodite wears full rawhide armor and the forsaker mask, and is armed with the adventure sword and beacon shield. Well armed and armored, they feel confident they can face whatever is in store for them.

Just outside the settlement, circling carrion birds in the distance point the survivors to a freshly-killed monster. The local scavengers try to defend their dinner, but the survivors fight them off to claim their prize. Aphrodite kills the most scavengers and claims a piece of hide from the corpse. Then, without warning, the survivors are plucked from time by the phoenix they are hunting and find themselves standing at the threshold of the overwhelming darkness.

In the darkness, Dionysus and Athena II both shriek in fear, unnerving everyone including themselves (1 brain damage to all non-deaf survivors). Despite the horrible noise, both Helen and Aphrodite manage to find a strange peace in the darkness (lose all insanity). This leaves them dangerously unprepared for the psychological trauma that they know can be inflicted by the phoenix. The phoenix, being able to see through time, knows that the survivors are coming for it. It prepares by fussily gathering materials for the temporary nest from which it will attack the survivors (phoenix moves 2 spaces back on the hunt board).

Athena II (using the Thundercaller ability) calls out to summon the thunder. A terrific thunder crashes in the distance. An electrifying dread washes over the survivors (All survivors suffer 2 brain event damage, so Helen and Aphrodite will start the showdown with their brain injury boxes checked). The survivors choose to investigate (+1 courage) and gingerly approach the origin of the sound. As they travel, they pass the shattered corpses of strange beasts and they follow the trail of corpses.

Eventually they come upon a massive knight, his armor reflecting a worn gold in their lantern light. Caked in blood, the knight leans against the side of a titanic winged creature. The knight speaks, its thunderous voice quakes the ground. Helen and Aphrodite go deaf from the sound of it (-1 permanent evasion, 1 bleeding token). Seeing the blood pouring out of their ears, the knight feels a bit guilty. He extends his arms, offering his Steel Sword and Steel Shield to Aphrodite in way of apology.

The knight then leaves, as the survivors simply look on in stunned silence. Eventually their attention is drawn to a massive shadow passing over them. They turn their gazes up in time to catch a glimpse of the indecipherable shape of the phoenix disappearing into the darkness. Time slips (all survivors suffer 2 brain damage, gain 1 hunt experience), and the hunters suddenly find themselves face to face with a phoenix. 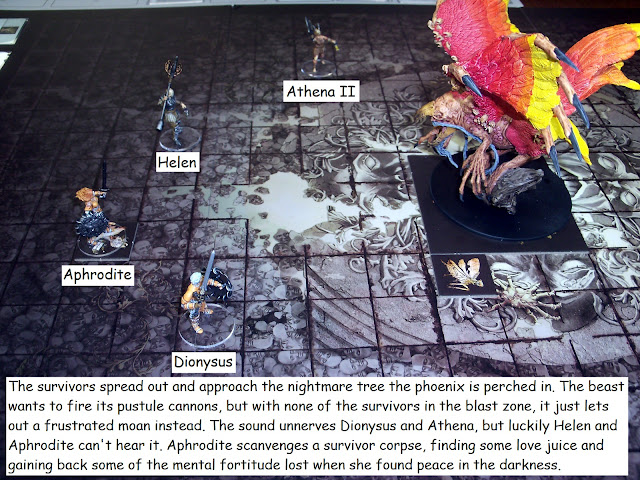 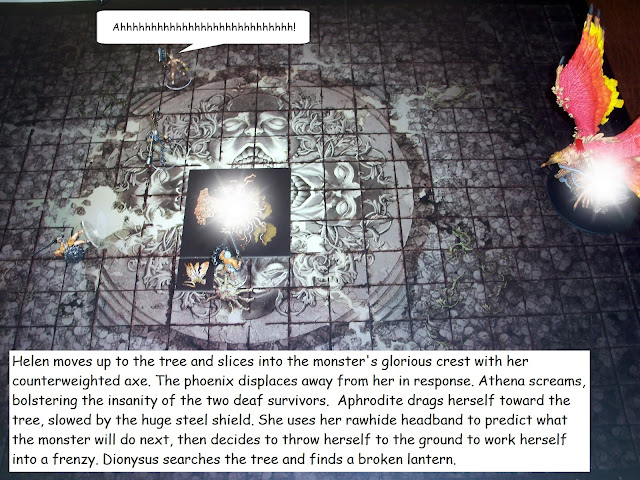 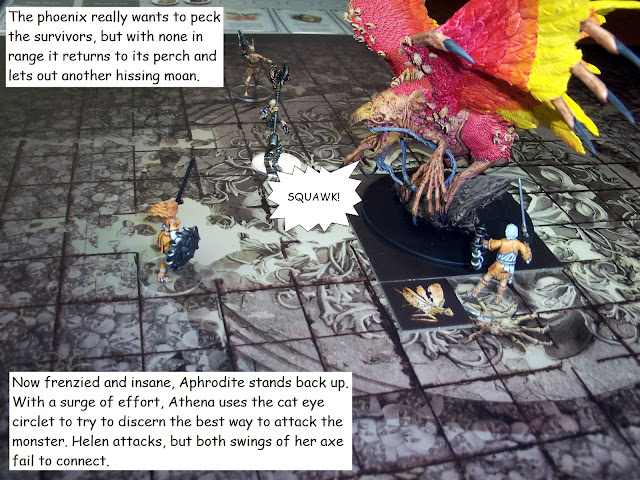 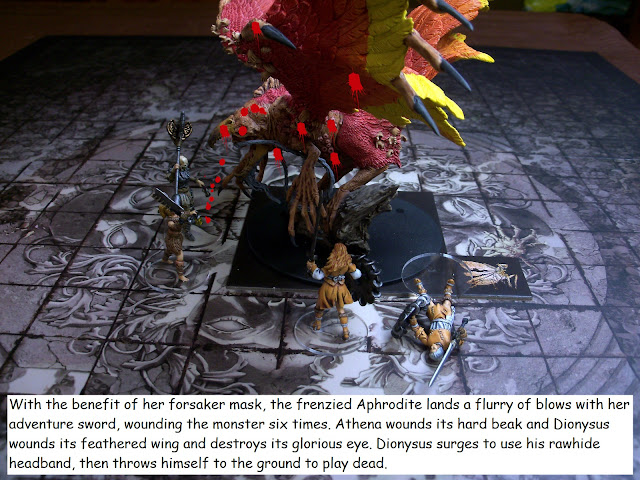 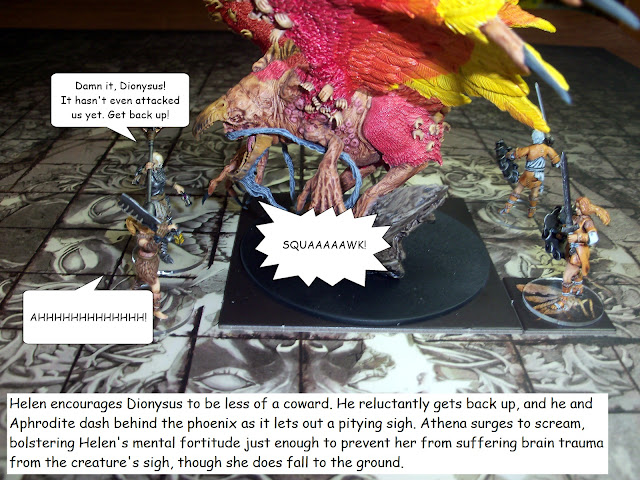 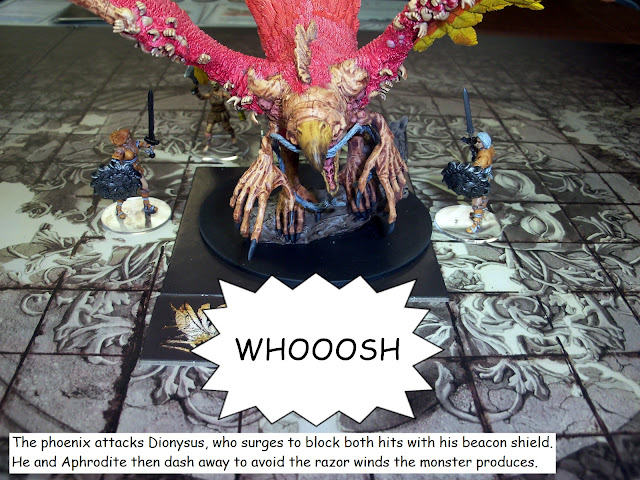 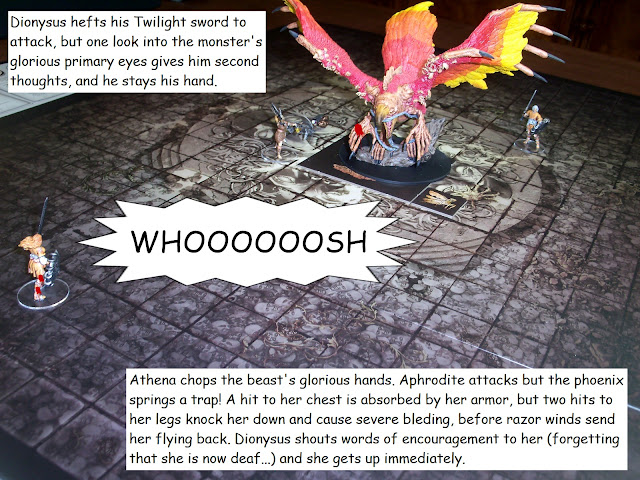 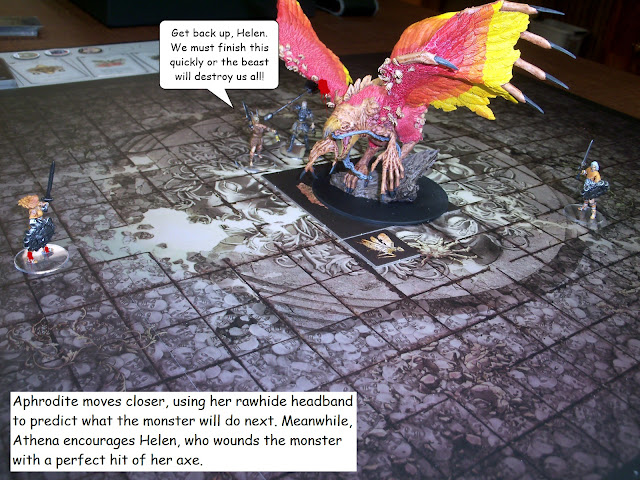 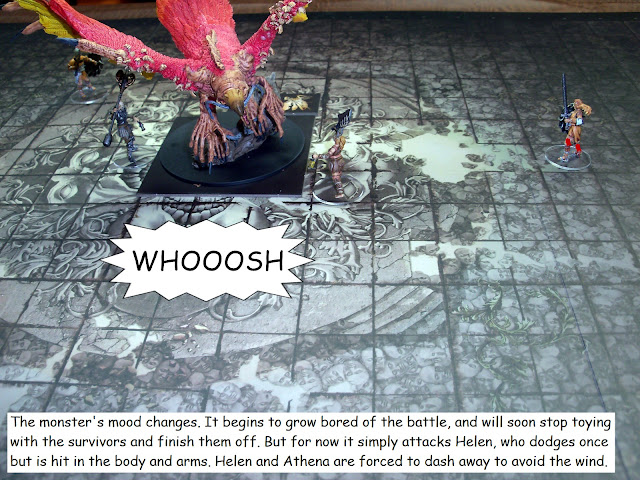 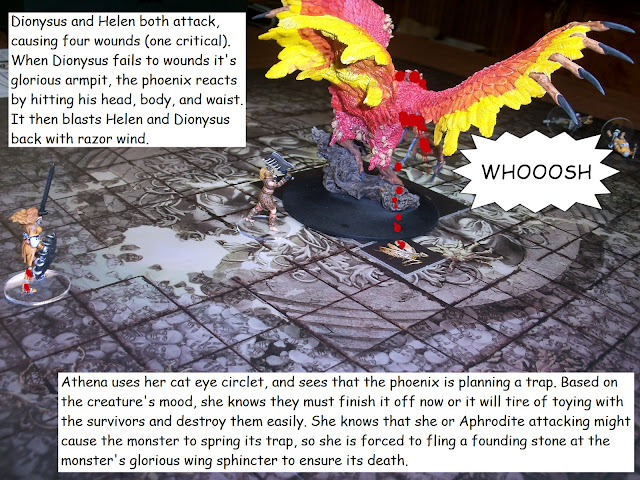 (Well, that was close. If the phoenix had gotten to go, it had the Bored mood card in play that would have resulted in it performing Spiral Age, and ageing Dionysus and Helen out of existence. If Aphrodite attacked, she surely would have triggered the trap card (third one down) which could easily have killed her since you can't block and during the trap. It would at least have knocked her down and blown her away with razor wind, so she wouldn't get another chance to attack. I didn't want to risk failing to hit or wound with Athena to do that last wound with her action (she had already used an action to use the cat eye circlet), so I used up my last founding stone to make sure I finished it off.)

From the experience of the tense showdown, several survivors perfect new ways to fight. Helen learns the Strategist fighting art, Athena Thrill Seeker, and Aphrodite Orator of Death. Out of nowhere, Helen's rib cage explodes and transforms into a regal placard, as worn by The King's Man. Witnessing this is rather traumatizing for the other survivors (3 brain damage). Helen also realizes she now knows how to get past the defenses of the King's Man (gains King's Step secret fighting art).

Upon their return to Olympus, the survivors find it gripped by a heat wave. The heavy and fur armor they all wear or carry causes them all to suffer from heat stroke, and they will need some time to recover (must skip next hunt). The heat will also make it unbearable to perform the scrap smelting they need in order to make more iron (prevents science or education endeavors, scrap smelting is a science endeavor). It will also make departing with heavy gear a monumental effort of will (any survivors who depart with heavy gear set their survival to zero upon departing).

Doing the best they can in the oppressive heat, the survivors endeavor to innovate, and come up with the concept of sculpture (+1 to survival limit and +2 survival when departing for a nemesis encounter). They then attempt to find some fluid and are able to find enough to allow them to do some scrap smelting even in the terrible heat. So they endeavor to smelt 3 broken lanterns into a piece of iron, and use the iron and 7 pieces of bone to craft a lantern helmet.

Scouts report sighting another Butcher approaching the settlement. Zeus, Hera, Hephaestus, and Artemis make a quick stop at the shrine to perform the armor ritual (+1 armor on all hit locations) before choosing their gear for the fight against the butcher. Despite the heat, Hera has no problem wearing heavy armor without it affecting her determination, as her will can't be shaken so long as she holds a sword in her hands (her swordsman's promise fighting art grants her full survival at the start of a showdown as long as a sword is in her gear grid). The other survivors, however, are forced to leave the heavy gear behind so they don't suffer unbearably from the heat wave.
Posted by Craig Welter at 8:00 AM