Zeus, Athena II, Aphrodite, and Icarus depart Olympus on a quest to find a new monster unknown to them, the fabled phoenix (level 1). Uncertain of what to expect of the encounter, they are careful to leave behind any critical gear that the settlement wouldn't be able to recover from their corpses if things go badly.

Zeus wears rawhide armor and carries muramasa and a beacon shield, along with some bandages for the inevitable self-inflicted bleeding he will cause with the ridiculously sharp sword. Athena II wears the forsaker mask and cat eye circlet over a skull helm, and carries a counter-weighted axe and beacon shield. Aphrodite wears screaming armor and is armed with a scrap sword. Icarus, the red savior, wears rawhide armor and is armed with a cat gut bow and claw head arrow.

The group of survivors heads off in a new direction in search of a young phoenix. Ahead, the stone faces on the ground give way to a field of man-sized fleshy boils sprouting thick black hair. The fleshy fields radiate moist heat. As they travel, every survivor suffers heat exhaustion (lose 1 survival). However, each survivor is able to harvest some hide from the flesh fields. Then some gusting winds threaten to push the team back, but they lock arms, put their heads down, and easily push through.

As they proceed in the direction of what they believe are phoenix nesting grounds, the survivors begin to hear the crunching of glass beneath their feet. Aphrodite investigates to find the source of the glass and finds a broken lantern. The survivors then find themselves in a ruined settlement with an altar at the center. Upon it sits a lustrous feather, its glow illuminating the ghostly image of frozen worshippers. Icarus is unable to resist grabbing the beautiful feather. He instantly forgets the sum of his life (Hunt experience and weapon proficiency set to zero and lose all fighting arts and disorders).

The other survivors take some time to explain to Icarus who he is and what they are doing, which he takes about as well as can be expected. With that settled, he takes his feather and the survivors head out of the ruined settlement, where they quickly come upon a phoenix perched in the branches of a nightmare tree. 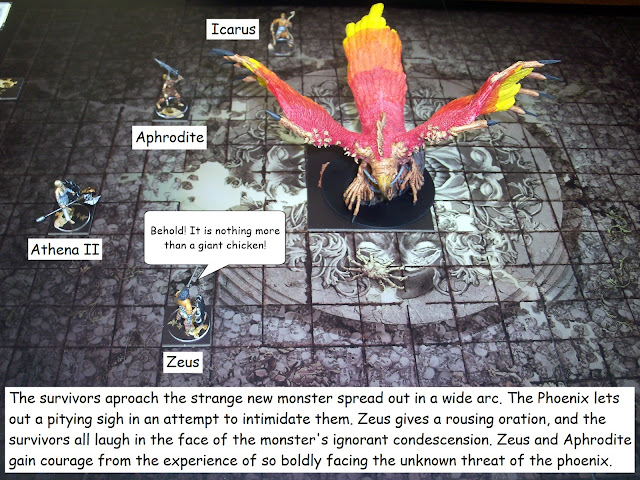 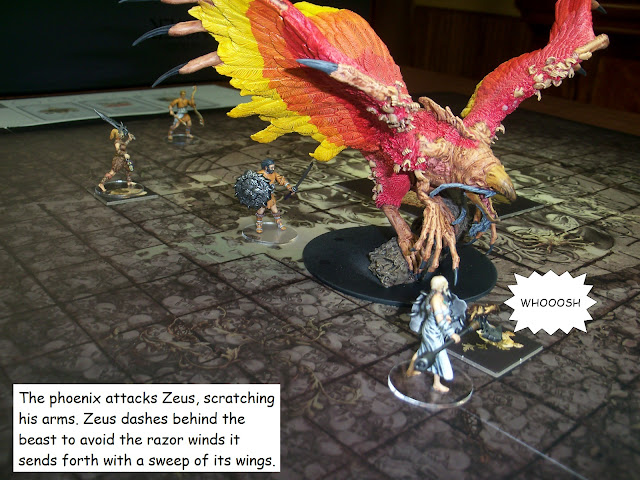 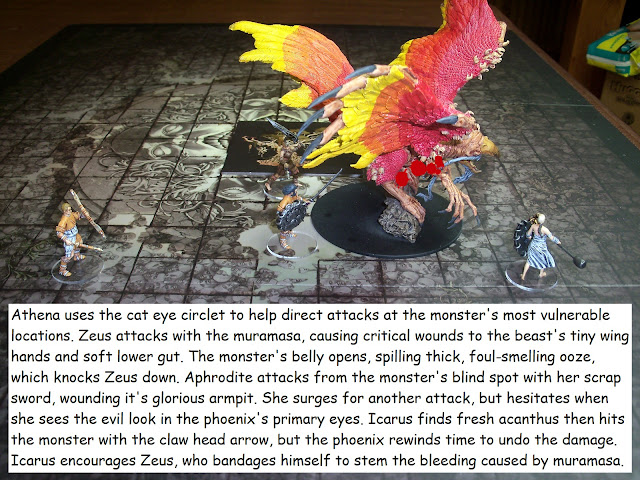 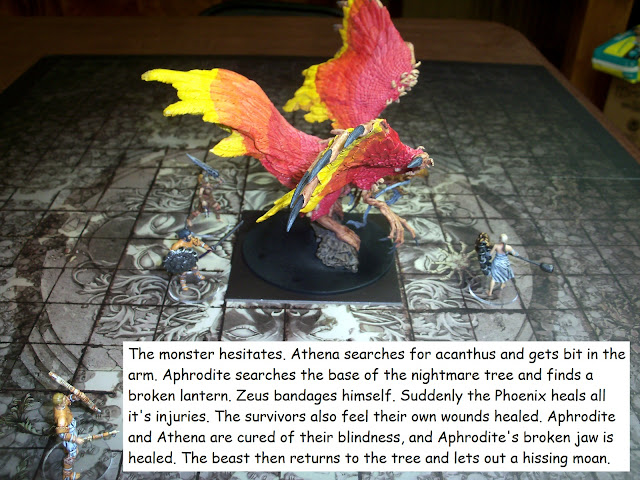 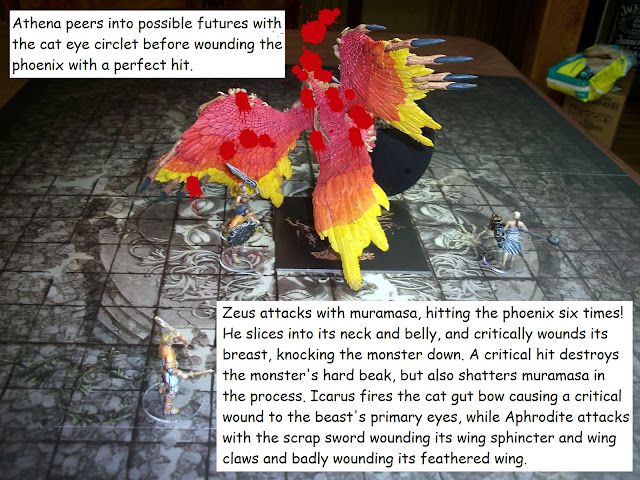 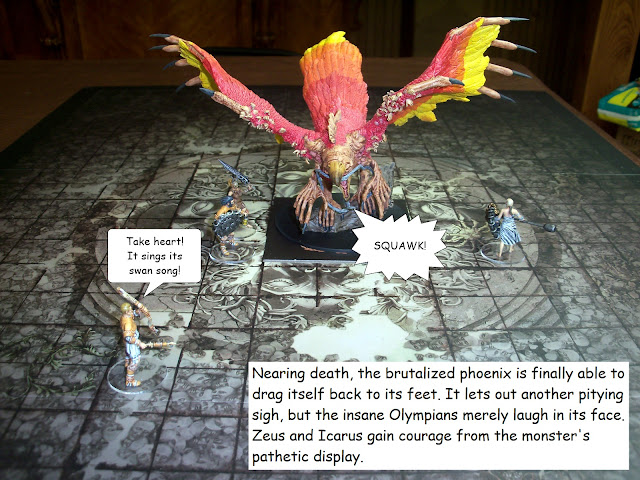 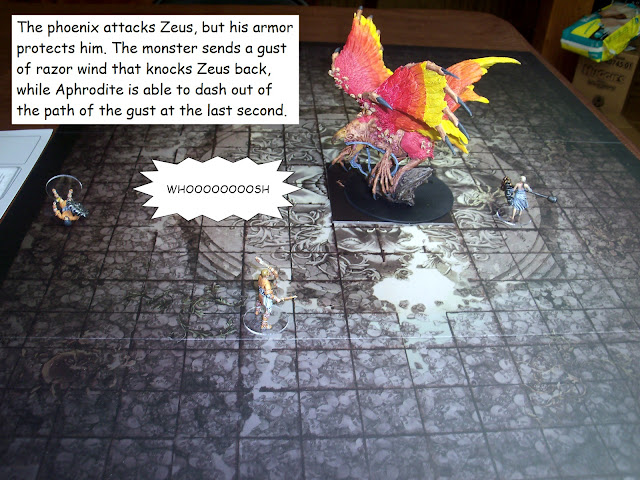 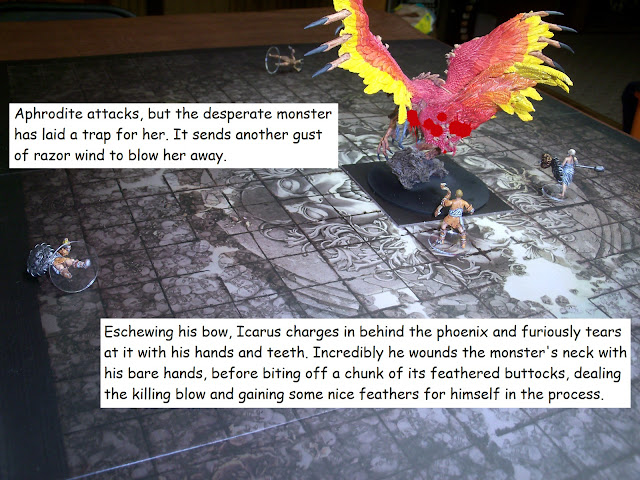 As the triumphant survivors return to Olympus, small cracks suddenly appear in the earth. As the cracks widen, they blech up hot, foul-smelling vapor. Icarus, the Red Savior, unceremoniously falls into one of the cracks and is never seen again.

The remaining Olympians are shocked at the suddenness and meaninglessness of Icarus's death, but they soon get on with their lives. They innovate ways to better train their young to make them even stronger fighters (Clan of Death innovation). They also spend significant effort improving their resources with scrap smelting and leather making. They create two pieces of iron from their six pieces of scrap, and also make 10 pieces of leather. They use all these improved resources to craft a lantern cuirass, lantern mail, and lantern greaves. Having used all their scrap and hide, it will take a great haul of resources and effort to come up with the necessary components to finish the suit of lantern armor, but in the meantime what they have will be much better than nothing.

The Olympians decide that the young phoenix they hunted was much less deadly than they had expected. They believe they would have no difficulty defeating an older one, especially with their new pieces of lantern armor. Athena II and Aphrodite decide to go back out to hunt a mature (level 2) phoenix, and are this time joined by Dionysus and Helen (the green savior).
Posted by Craig Welter at 8:00 AM