Another butcher approaches Olympus from the darkness. Zeus gathers Hera, Hephaestus, and Artemis to defend their settlement from the monster. Zeus wears rawhide armor and a forsaker mask and carries the adventure sword. Hera carries a scrap sword and beacon shield and wears lantern helm, mail, greaves, and cuirass. Hephaestus wears the other set of rawhide armor and is armed with a cat gut bow and claw head arrow. He also carries bandages to use on any severe bleeding. Artemis wears a suit of screaming armor and a cat eye circlet, and will fight with the cleaver taken from the last butcher who tried to enter Olympus. 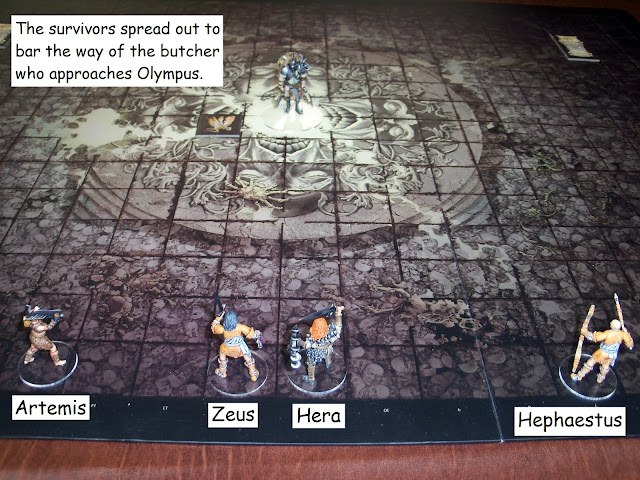 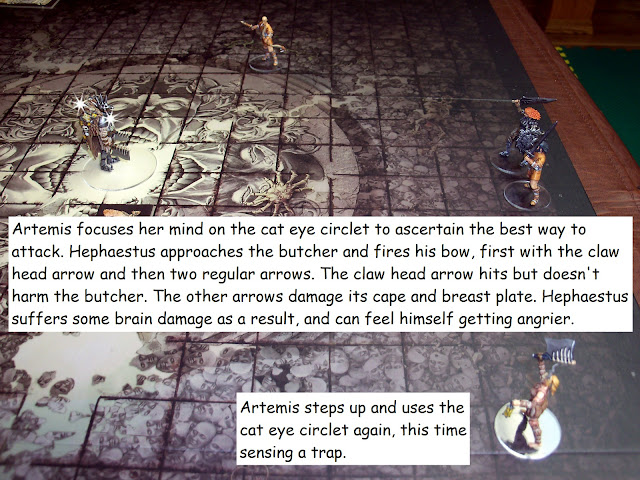 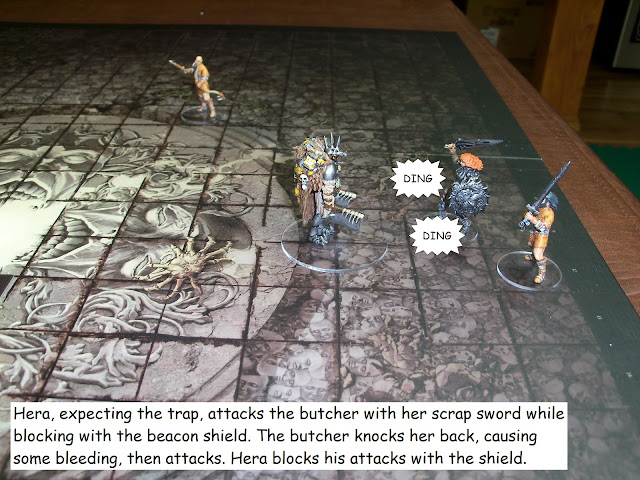 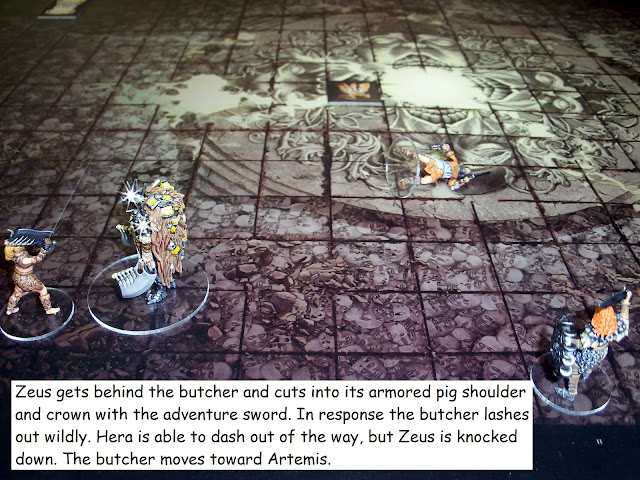 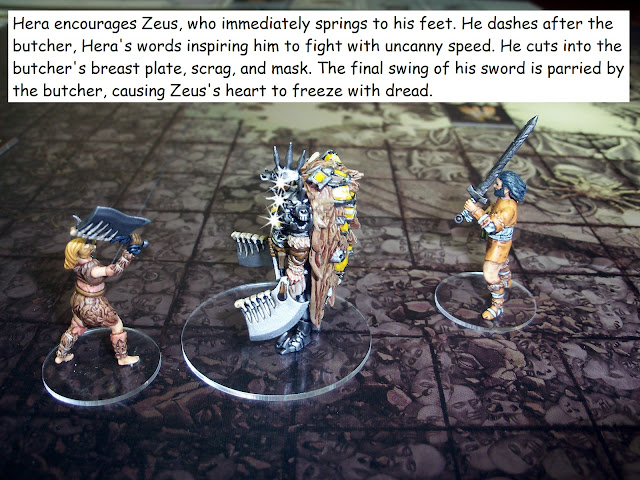 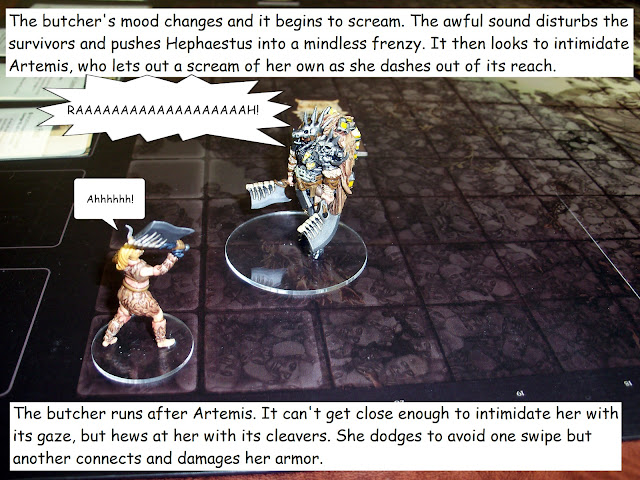 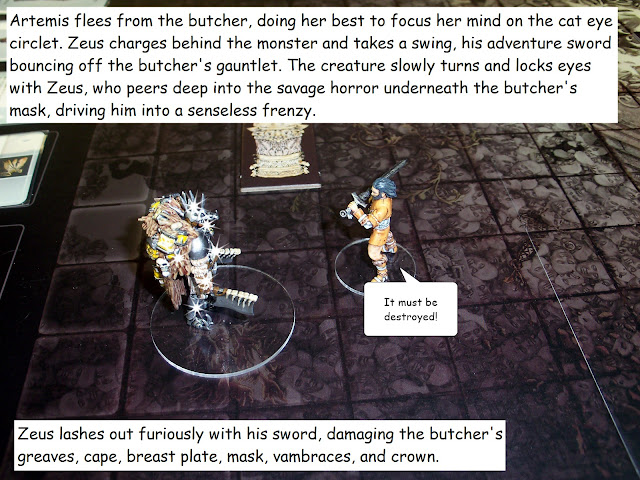 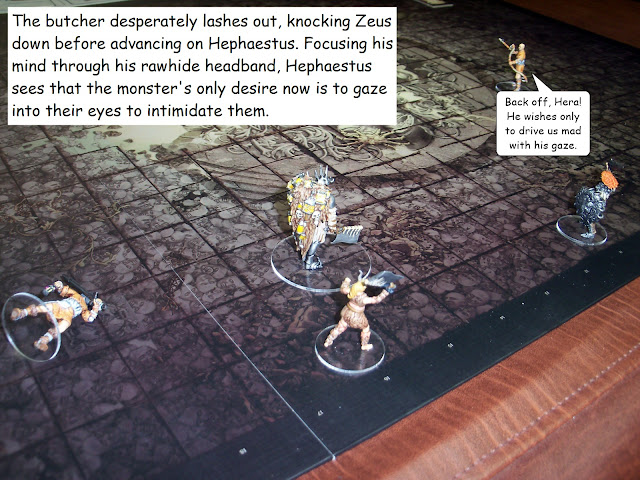 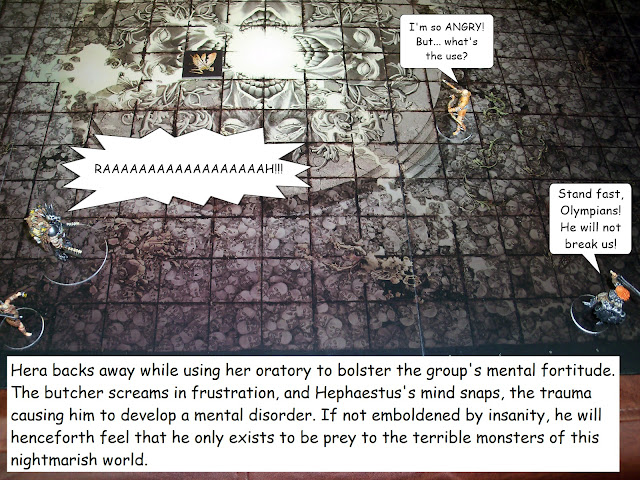 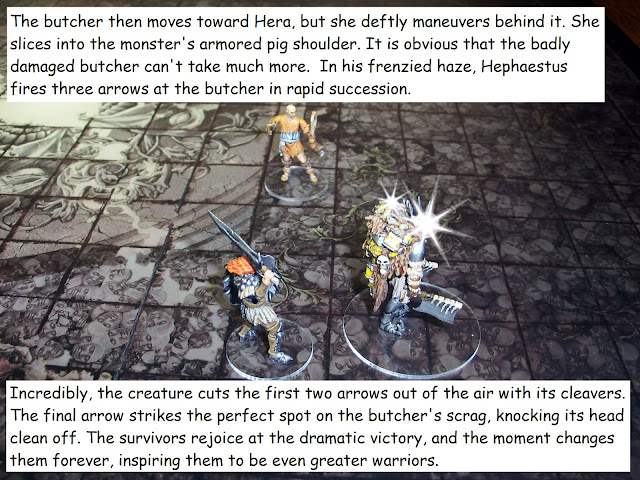 Hephaestus gains valuable experience from the showdown, especially in learning how to make sure his attacks cause harm (gains +1 strength from ageing). The survivors take one of the butcher's cleavers and loot 5 broken lanterns from the monster's empty armor. Artemis finds a hunk of living flesh on the butcher's corpse that allows her to regrow her dismembered arm, so she will once again be able to use two-handed weapons.

That night, one of the Olympians has a weird dream about a giant man that controls all of their lives from the darkness above. Describing the dream to the others bolsters their ability to resist the madness they frequently encounter (departing survivors gain +3 insanity). Later, one of the survivors discovers an opening in the lantern horde. Carefully entering the opening, he discovers a slumbering monster inside. The survivors can sense that it will eventually awaken and attempt to destroy them all. The Olympians decide they must prepare for this by trying to craft the perfect weapon to use against this monster (gain Ultimate Weapon innovation - can gain one monster resource of your choice as rewards after successful showdown). In addition, Aphrodite begins to make her own preparations, planning for a final feast before they must face their destiny (add Hands of Heat event to the timeline in 4 years).

The survivors also decide they will need to increase their numbers in order to prevail against the creature in the lantern horde. Dionysus and Athena both paint the founder's eye design on their faces (+1 to Intimacy rolls). Hephaestus makes use of his skills as a match maker, along with two batches of love juice, to facilitate some intimate encounters between Dionysus, Athena, and Aphrodite over the course of the lantern year. As a result, Athena gives birth to a boy who inherits some of Dionysus's skill with a twilight sword, followed by twins who inherit some of her ability with an axe. Aphrodite also gives birth to twins that are blessed with a natural ability to wield swords.

The survivors also spend some time and resources to innovate nightmare training, which, though dangerous, gives them a way to hone their skills with weapons between hunts. Needing more resources to ready themselves for the trials ahead, the Olympians prepare for another hunt. Dionysus, Aphrodite, Athena, and Hera, who are all close to mastering the use of their favored weapons, will form the hunting party. Wanting to gain as many resources as possible, they resolve to hunt for an ancient (Level 3) screaming antelope.
Posted by Craig Welter at 8:00 AM