Dionysus, Aphrodite, Hera, and Athena II prepare to hunt an ancient (level 3) screaming antelope. Dionysus wears screaming armor, a forsaker mask, and a lucky charm. He is armed with his twilight sword and a beacon shield. Hera wears the lantern helm, cuirass, mail, and greaves. She also wears monster grease to make her harder to hit and carries dried acanthus to apply to any severe wounds. She is armed with a scrap sword, and wears a monster tooth necklace to increase the strength of her attacks. Aphrodite and Athena both wear full rawhide armor with monster grease applied and carry some dried acanthus. Aphrodite carries the adventure sword and a beacon shield, while Athena is armed with a counterweighted axe and is wearing a cat eye circlet.

Not far from Olympus, the survivors are struck by the scent of rotting meat wafting from a hulking corpse ahead. As they get closer they discover the corpse is that of a dead antelope, and are startled by the arrival of the antelope's killer, a massive (level 4) white lion! The lion doesn't spot them and the survivors are able to sneak up behind it. Unknown to them, this is a particularly ancient and rare white lion with golden eyes (lion gains +1 speed and +2 accuracy, and when survivors attack they suffer 3 brain damage unless in its blind spot). Though they prepared for a showdown with a screaming antelope, the survivors are unwilling to waste the opportunity before them and resolve to attack the lion. 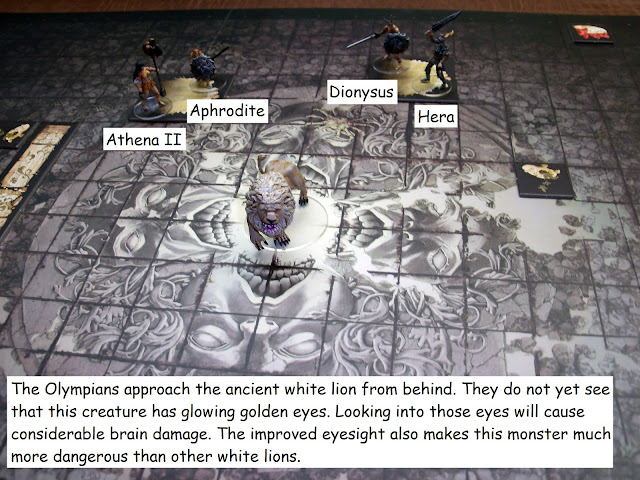 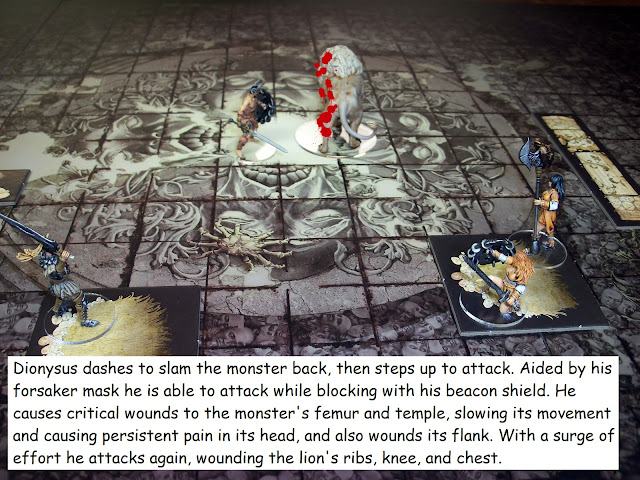 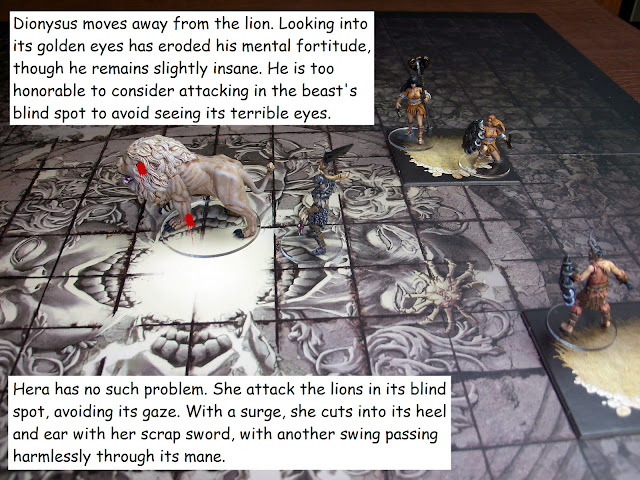 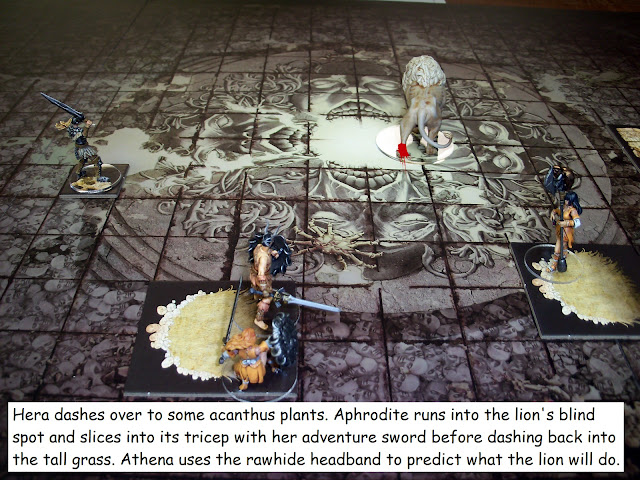 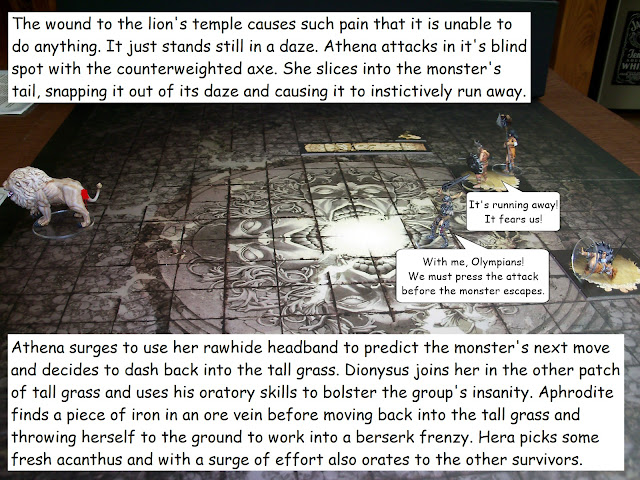 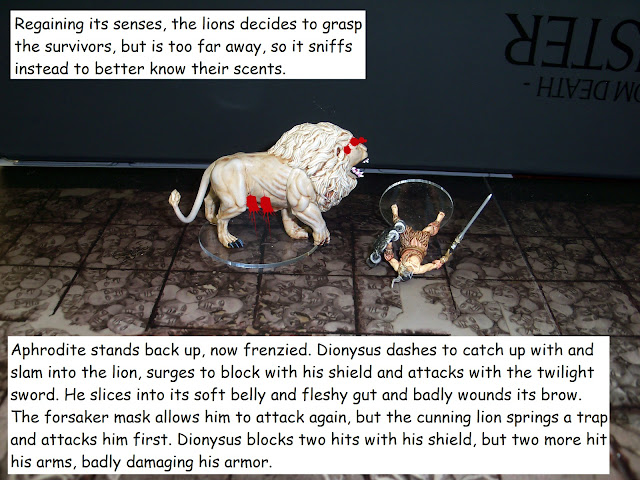 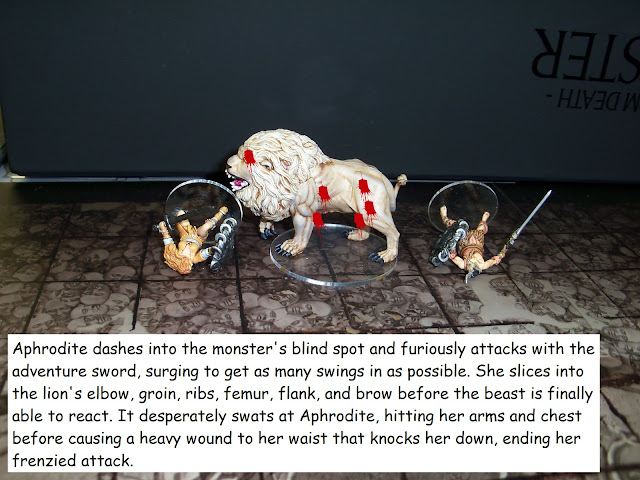 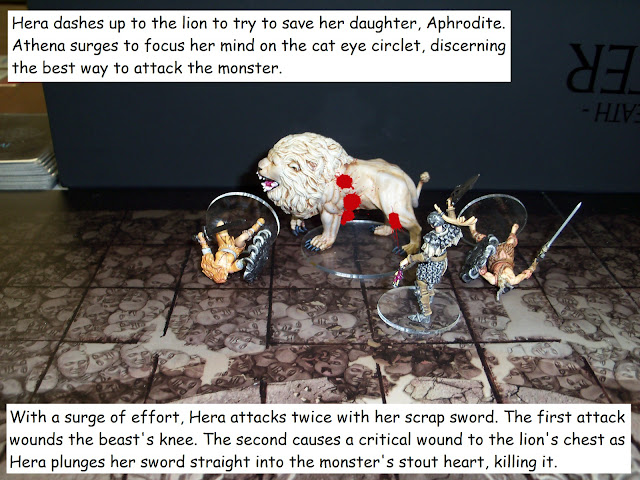 As the survivors dissect the slain beast for resources, Hera and Aphrodite each devour one of its golden eyes. As a result, both gain some of the lion's enhanced eyesight (+1 permanent accuracy). Hera also perfects a new fighting art from her experience, learning how to turn a perfectly aimed attack into a particularly mighty strike (on a perfect hit, gain +2 strength until the end of the attack). After many dedicated years of experience, Athena II finally gains mastery of axe weapons, learning how to use axes to cause more persistent injuries. More importantly, she is now able to teach the rest of the settlement how to specialize in the use of axes, so they can all benefit from an increased ability of wounding monsters with any axe.

Similarly, Dionysus feels he has finally mastered the use of his twilight sword, and somehow knows he must now leave Olympus forever to pursue a higher purpose. Having gazed into the white lion's golden eyes so many times during the fight, Dionysus is no longer insane enough to wield the sentient twilight sword he has fought with for so long. He therefore instructs the others to give the sword to his son back in Olympus, before walking off into the darkness in search of the mysterious order of knights who gave him the twilight sword in the first place.

The three remaining survivors return to Olympus with a large haul of resources, both from the vanquished lion and from the antelope carcass, but with heavy hearts. Hera and Aphrodite, who each ate one of the lion's golden eyes, seem to experience some unforeseen effects on their minds. They begin to argue with each other over who is the greater hunter, and as their vainglorious quarrel becomes more heated, their screams rouse the entire settlement. All of Olympus witnesses the dispute come to blows, ending only when Aphrodite delivers a gaping chest wound to her mother. Hera is able to apply some dried acanthus to the wound and it eventually heals, but the spirit of rivalry has infected other survivors and will not be so easy to cure.

With that incident behind them, the survivors endeavor to purify some scrap into a piece of iron, and work many hides into leather in order to craft a pair of lantern gauntlets. This gives them a completed set of lantern armor, the best armor they can possibly create. They also craft a whistling mace, which will be particularly effective when used by a survivor wearing the lantern armor. With their third and final endeavor, the survivors innovate the ability to make pottery.