As The Hand approaches the outskirts of Olympus once again, the survivors prepare to endure the monster's test and hopefully gain the rewards of earning its respect. Zeus, Aphrodite, Artemis, and Odysseus choose their gear carefully, managing their affinities in order to draw The Hand's attention to Aphrodite and Artemis as much as possible. Aphrodite and Artemis carry the beacon shields. Aphrodite also applies copious amounts of monster grease, while Artemis is naturally quite evasive. The Olympians hope to entice The Hand into directing most of its attacks at Aphrodite and Artemis, who believe they can either dodge or block whatever the monster throws at them.

Zeus carries the steel shield and wears phoenix greaves to help him move faster, somewhat compensating for the effect of having to carry such a heavy shield. He also wears a rawhide headband which he will use to anticipate The Hand's attacks, allowing the survivors to draw The Hand toward Artemis and Aphrodite as much as possible. Odysseus has little to protect him if attacked, his only hope being the dried acanthus he carries possibly saving him from an otherwise fatal wound. He also wears the cat eye circlet, just in case the Olympians determine they can achieve some advantage from attacking The Hand. For the most part, they intend only to spread out and block with their shields, doing whatever they can to draw the monster's attacks toward Aphrodite and Artemis. 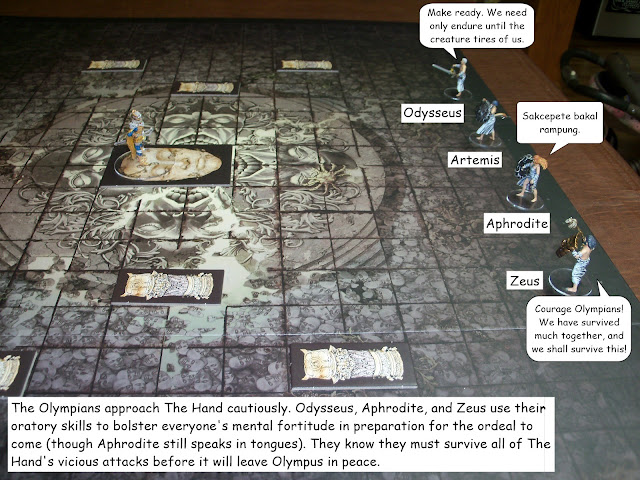 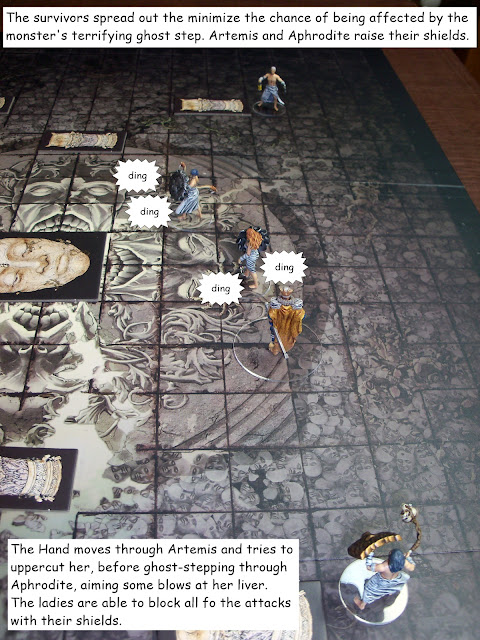 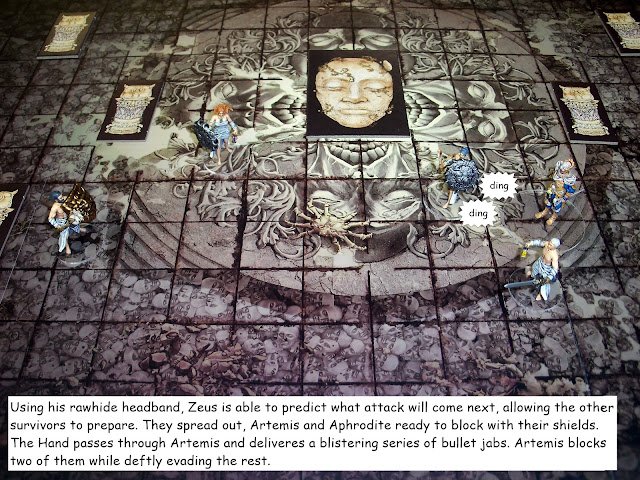 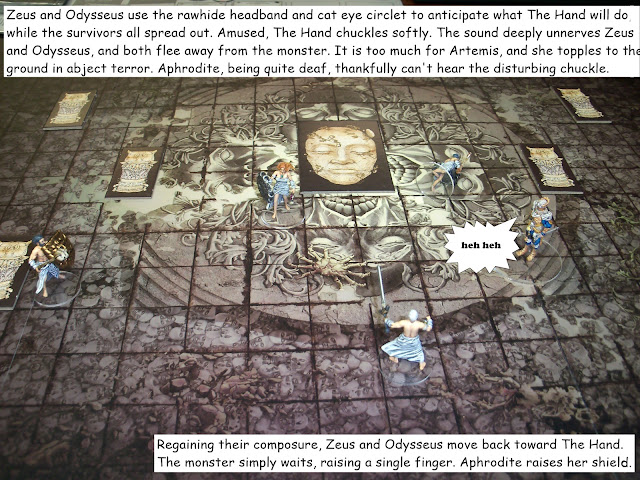 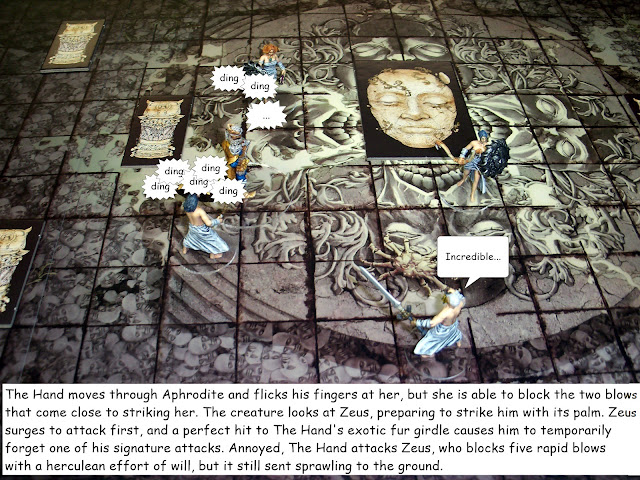 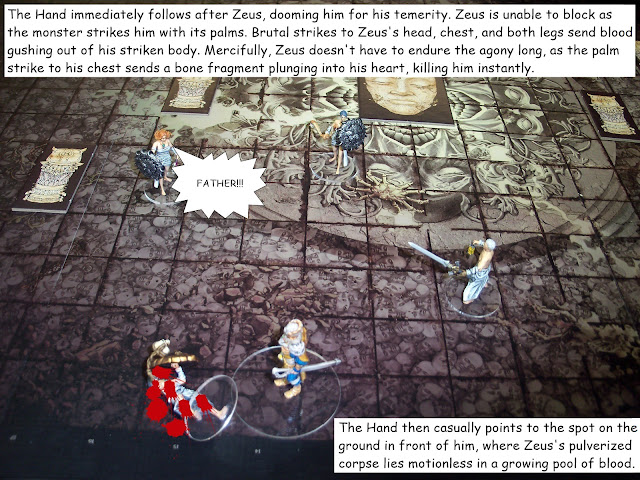 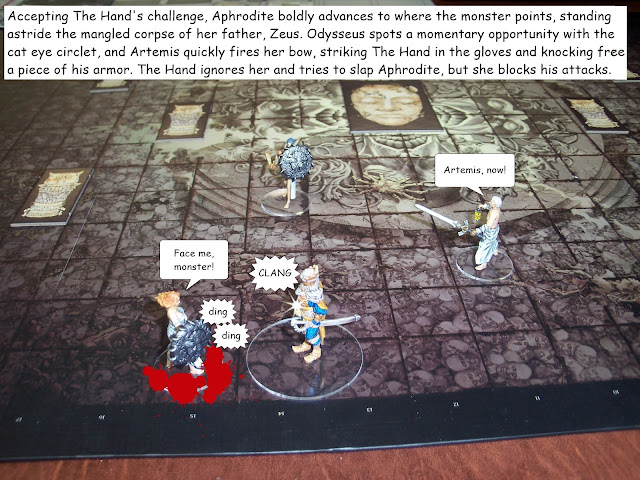 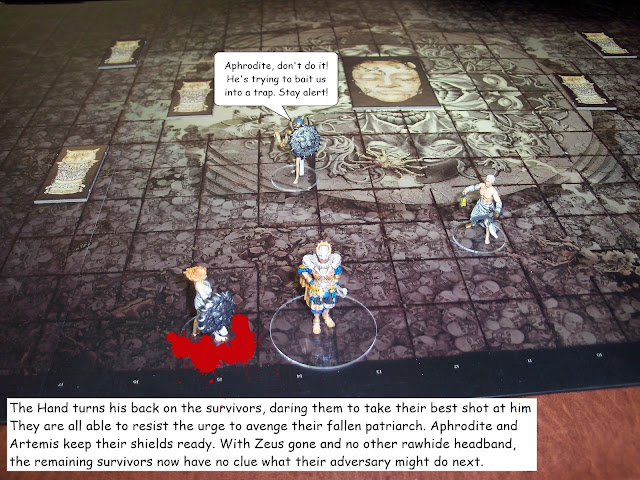 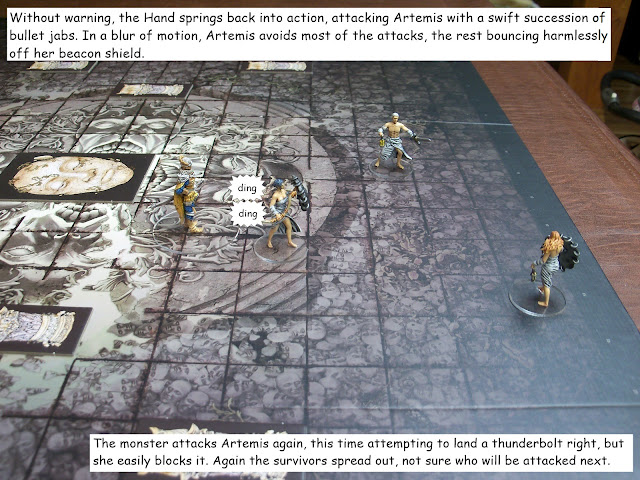 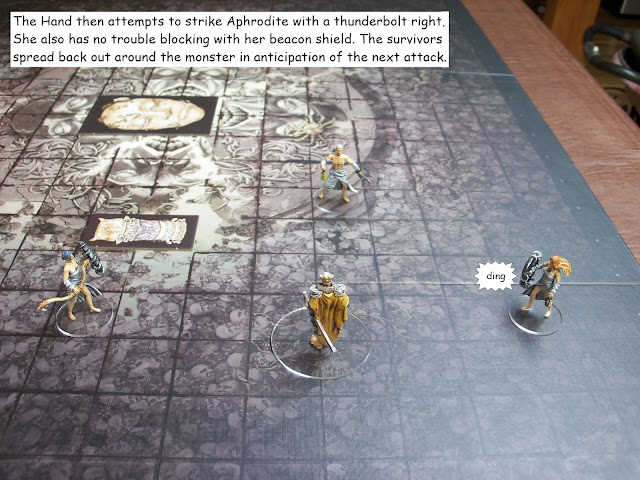 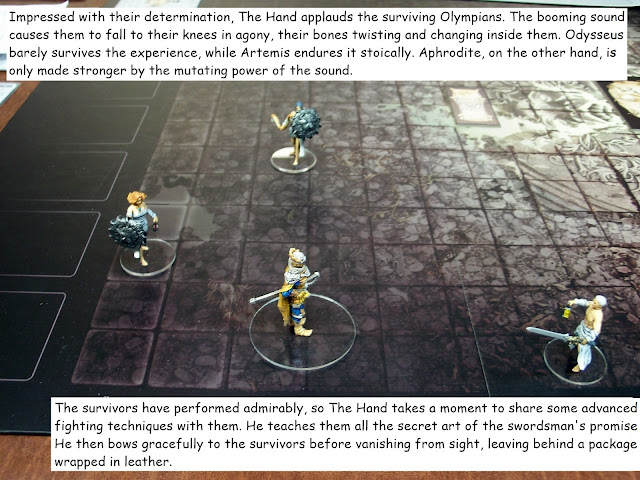 The package contains the remains of a nameless Olympian whom The Hand had somehow abducted from the settlement and expertly dismembered. Not wanting the former Olympian to go to waste, the survivors are able to use the body parts as resources, along with the leather wrapping and the broken piece of armor that Artemis had dislodged when she attacked The Hand. The survivors also cannibalize the body of Zeus, though it is so badly damaged they get very little use out of it. The death of Zeus, patriarch and founder of Olympus, saddens the remaining survivors, but they know they must move forward and do everything possible to prepare for the ultimate showdown ahead of them.

A dark dentist once again visit Olympus, but none of the Olympians are interested in his services. Though not in a mood to celebrate, the Olympians proceed with the long-planned lantern branding feast, consuming half of their remaining resources. The event culminates in a branding ritual, where Odysseus received a lantern brand on his feet which (for some reason) increases the speed of his attacks. Artemis trains with her bow, easily improving her skill with it. The settlement also does some scrap smelting and leather making to create the leather and most of the iron they will need to finish crafting a full suit of phoenix armor.

Hera, Artemis, Romulus and Remus prepare for one final hunt before they face off against their ultimate foe awaiting them in the center of the lantern horde. They choose to go after an adult Phoenix, desperate to acquire the remaining phoenix parts they need to complete their set of phoenix armor before their inevitable encounter with their ultimate nemesis, The Watcher.
Posted by Craig Welter at 5:06 PM