Knowing they will need more resources to prepare to faced the sinister presence in the lantern horde, the Olympians determine to risk hunting another mature (level 2) phoenix. They also want more of their recently born survivors to gain some valuable experience fighting monsters. So Artemis and Hephaestus will lead newcomers Remus Lanterna and Odysseus on the hunt.

Artemis is protected by a full suit of lantern armor. She is armed with a cat gut bow, claw head arrow, and bone darts as backup. Hephaestus wears rawhide armor and carries a whistling mace and beacon shield. Remus wears screaming armor and wields the counter-weighted axe. Odysseus, son of Dionysus, wields his father's twilight sword, carries a beacon shield, and wears rawhide armor and the forsaker mask, allowing him to fight with incredible ferocity.

As the survivors begin tracking their prey, a rumpled, unsightly bird stands in their path. Its beady, wet eyes blink expectantly and it calls out with an eerie human chuckle. Somehow understanding what it wants, Hephaestus feeds the troll bird some monster grease, and it hops off with a terrible cackle. The hunters then enter an abandoned settlement, where they find a altar with a feather floating above it that Remus can't resist grabbing. He instantly forgets the sum total of his life's memories, which luckily did not amount to much, this being his first experience outside the settlement.

After leaving the settlement, a constant moan follows the survivors. Eventually, they enter an area shrouded in thick fog and the wailing reaches a fevered pitch. Hephaestus becomes separated from the others, and the fog around him turns black and fills with shapes of tormented faces. He is driven to madness by the faces, and hereafter suffers from a binge eating disorder, the only way he can find to cope with the trauma of the experience. Meanwhile, the phoenix sets about gathering material for its nest, making it much easier to track.

However, before they reach the monster's nesting place, the survivors approach a 5-sided monolith made of flesh that stretches into the darkness overhead. Limbs and faces of humans and creatures alike protrude from all sides. They keep their distance, but the bizarre sight causes them all some mental strain. Shortly thereafter they discover the next of their quarry and prepare to attack. 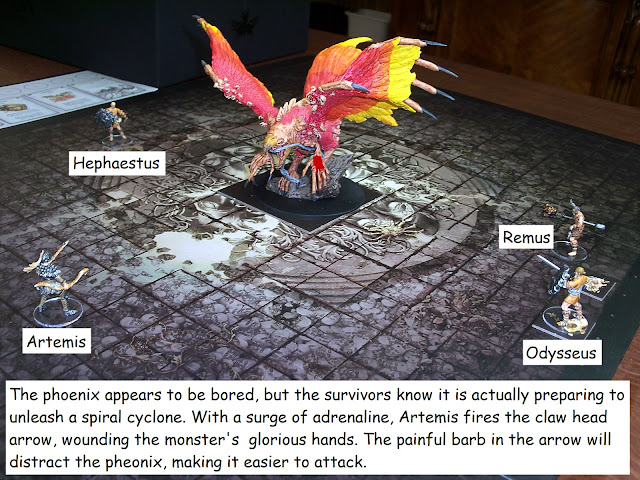 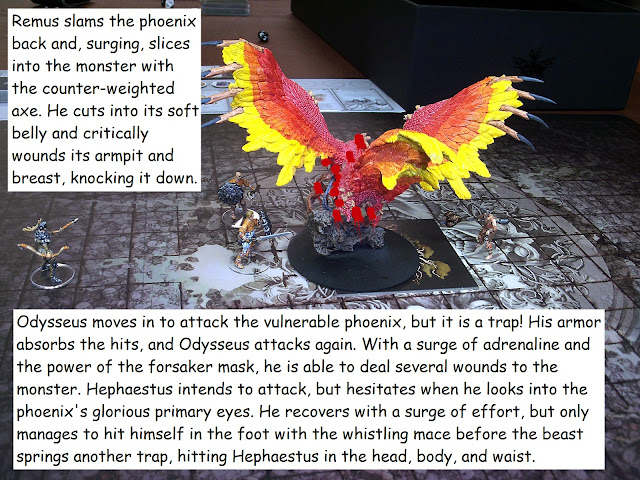 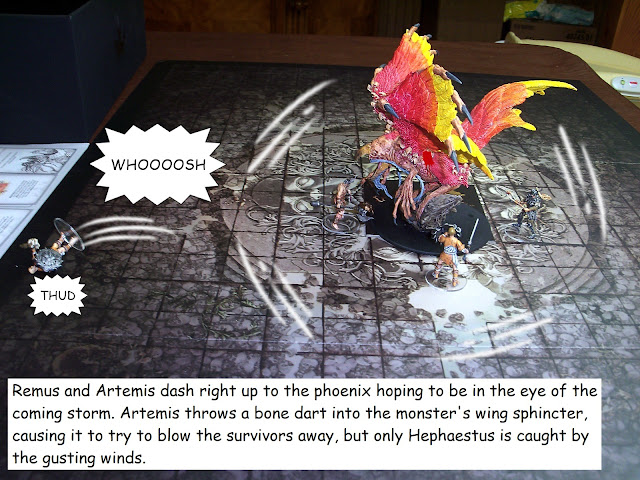 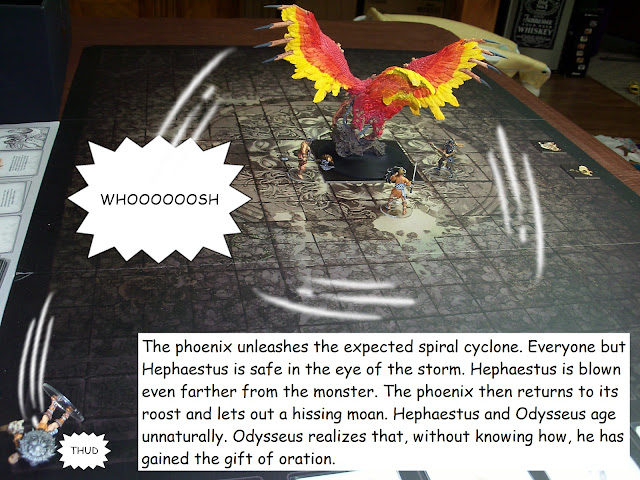 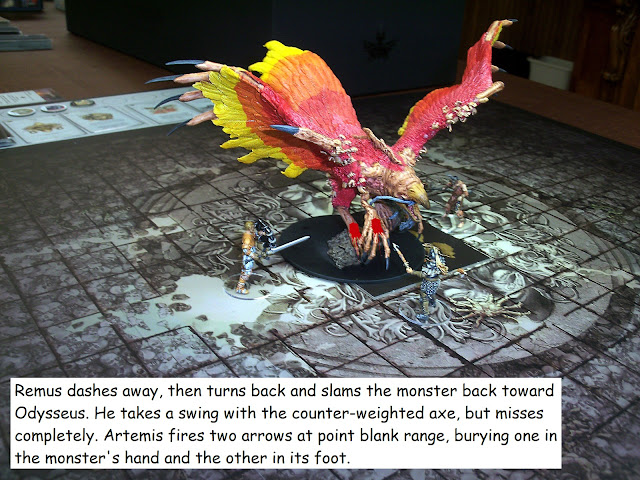 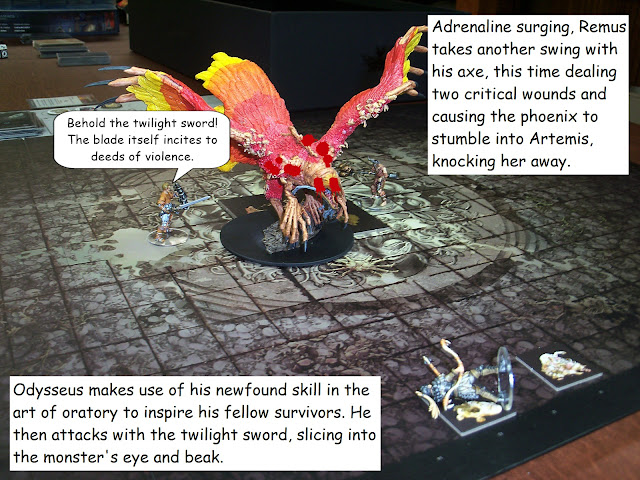 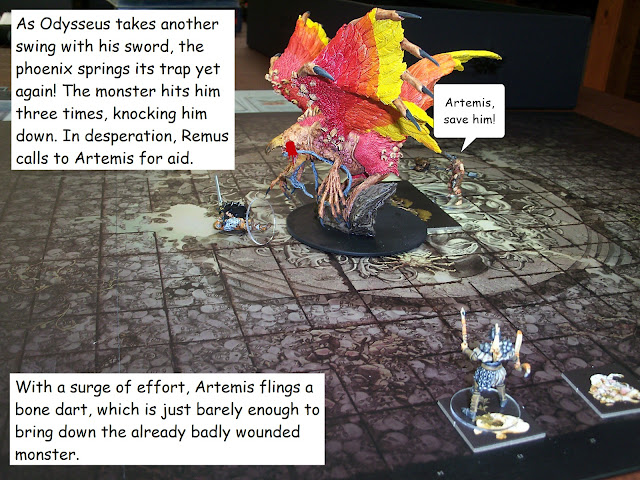 Due to her inspired leadership in this showdown, while Hephaestus was mostly unable to help, Artemis becomes much more confident in her leadership abilities (gains Leader fighting art). The survivors dissect the monster, salvaging all the resources they can from it and bring them back to Olympus. The they find the settlement under another spell of glossolalia, every resident speaking in their own incomprehensible language. This prevents them from performing any science or education endeavors, such as nightmare training or scrap smelting, derailing some of their plans.

Though they aren't able to perform their preferred endeavors, the Olympians try to make the best of the situation. They are able to convert some hide into leather. They also create a barber surgeon, crafting both a first aid kid and elder earrings using the tools of this new location. They begin the process of crafting a suit of phoenix armor as best they can with the resources they have, crafting a phoenix helm, plackart, and greaves. Knowing that many of their resources will be wasted if they don't use them now, the survivors also craft an hours ring and frenzy drink, which may come in handy in the future.

Hephaestus performs a successful trepanning on himself, and instantly begins to feel relief from his oppressive belief that he exists only as prey for the monsters of the wilderness (removes Prey disorder). Odysseus once again paints battle paint onto his face, bolstering his reserves of insanity, which he will need in order to properly wield the twilight sword in the battles to come. It is then reported by the sentries that The Hand is once again approaching Olympus. Zeus, Aphrodite, Artemis, and Odysseus prepare themselves as best they can to try to survive The Hand's brutal test of their resilience.
Posted by Craig Welter at 8:00 AM