The Olympians still need several specific types of phoenix resource in order to complete a full set of phoenix armor. To increase their chances of acquiring the necessary resources, they decide to risk hunting an adult (level 2) phoenix. They know how risky such an encounter can be, and even how dangerous the search for such a monster can be, having experienced near disaster attempting it before. Artemis, Hera, Romulus, and Remus are chosen to undertake the perilous hunt.

Artemis wears the trusty rawhide armor and carries a cat gut bow, claw head arrow, and a beacon shield. She insist on going on the hunt because she feels that with just a little more experience, she will be able to completely master the art of the bow. Hera wears the phoenix helm, placart, and greaves, and carries a scrap sword and beacon shield. Romulus wears the screaming armor and cat eye circlet. He is armed with the counter-weighted axe and carries a first aid kit to bolster their survivability. Remus wears the suit of lantern armor and is armed with a whistling mace, the blunt weapon made much more effective with the additional weight of the armor behind every swing.

As prepared as they can be, the brave survivors depart on their hunt.


After journeying for a while, the survivors suddenly face grave danger. An ear-shattering bellow marks the passing of a truly titanic beast. The survivors cower on the ground, lying as flat as possible and hoping they are simply too small to be worth eating. Luckily they are all able avoid the notice of the titans passing by in the darkness. Meanwhile, unbeknownst to the Olympians, the phoenix fussily gathers materials for its temporary nest, which inadvertently takes it much closer to the hunting party.

As the survivors continue their hunt, the smell of cooking meat draws the them to a gigantic black cauldron. The pot is filled with a thick dark stew. Since all of them are completely insane, they all happily consume the contents of the mysterious cauldron. To Artemis and Remus, the stew tastes like warm blood, which increases both their survival and insanity. Romulus finds that no matter how much of it he eats, he is still hungry. This experience causes him to develop a binge eating disorder. Hera has dreams of the poor creature that last fed the cauldron fill her mind, and feels her limbs somehow strengthening as the vision engulfs her mind.

As they proceed on their hunt, the survivors come upon a ruined settlement. At its center, an altar hold a lustrous feather. The glow of the feather illuminates the ghostly image of frozen worshipers. Even though they all know exactly what will happen, having experienced this exact same circumstance on previous phoenix hunts, Remus simply can't resist the urge to grasp the feather. As expected, he forgets the sum total of his life experience.

The survivors approach the nesting tree of a mature phoenix. When they are almost upon it, the ground beneath Romulus's feet gives way, and he plummets into a pit below. He lands at the bottom with a soft thud, the bump to his head rendered harmless by the protection of his helmet. After he climbs his way out, the hunters spread out to surround a nearby tree, atop which is perched the object of their hunt, a mighty phoenix. 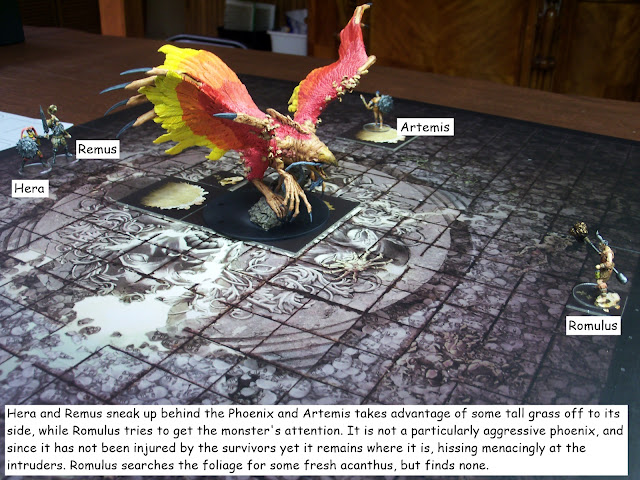 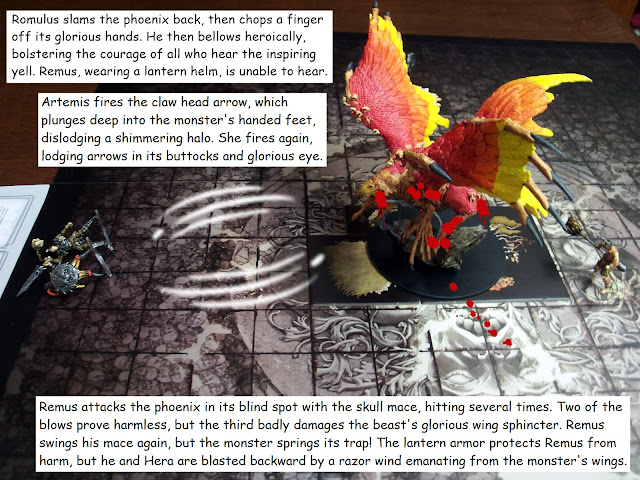 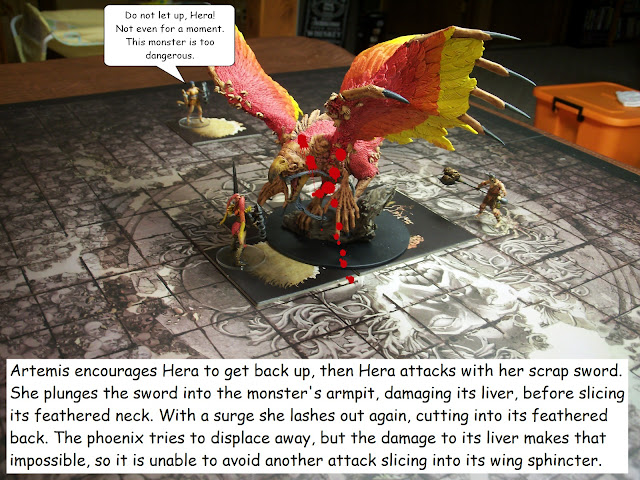 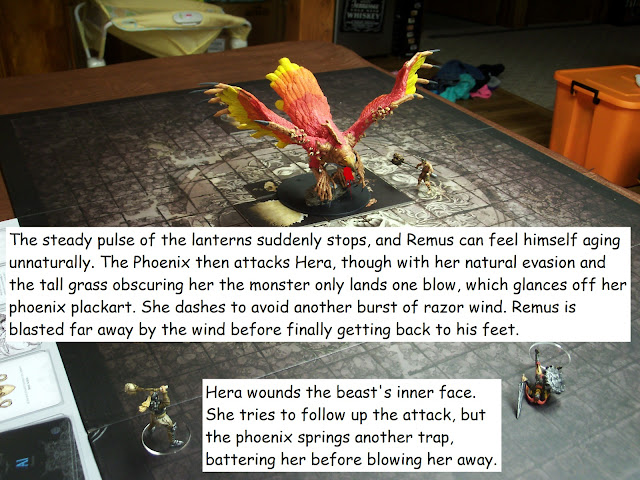 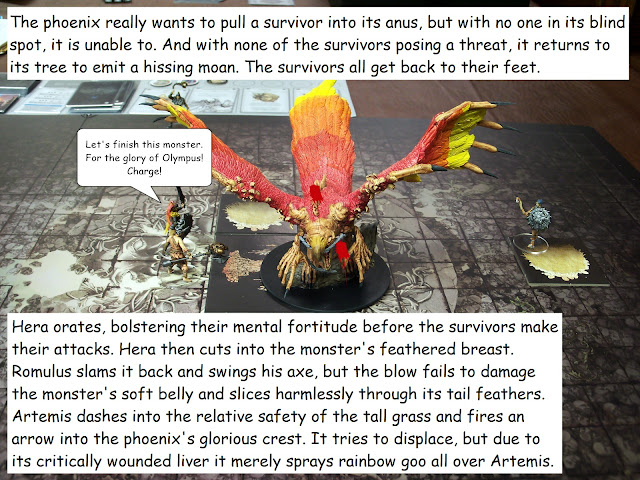 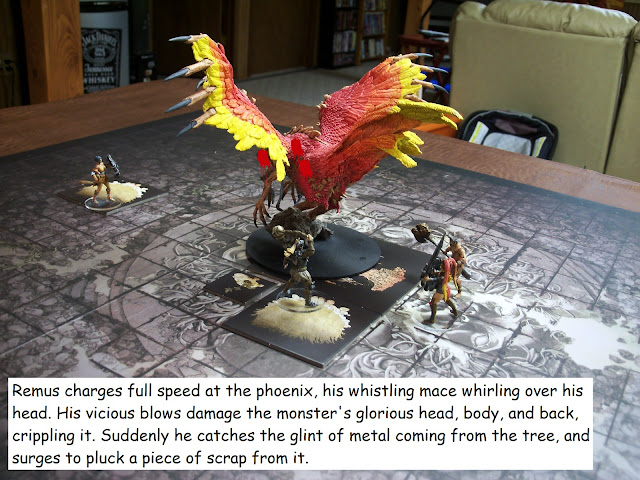 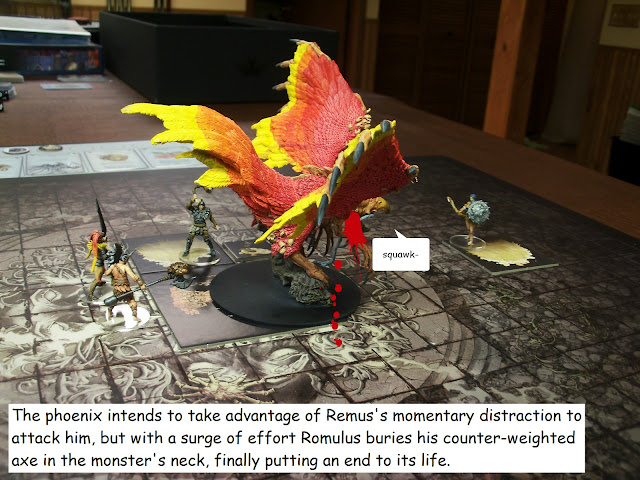 Her years of experience pay off, and Artemis finally masters the use of the bow. Romulus also benefits from the experience, growing stronger. The survivors return to Olympus with their large haul of resources. On the way, Artemis has a disturbing dream about a giant man that controls all of their lives from the darkness above. Describing the dream to the others bolsters all their ability to resist the madness they frequently encounter, adding to the already severe insanity of those preparing to face the watcher in the lantern horde.

A hooded knight comes to Olympus to engage Odysseus in a duel. Odysseus triumphs, and in the process learns much from the stranger's technique, greatly improving his proficiency with the deadly twilight sword. The Olympians are able to craft phoenix gauntlets and faulds, the final pieces needed to complete the full set of phoenix armor. They also make a couple of lucky charms, hoping to improve their odds in the climactic battle to come. After their particularly large haul, this leaves them with many resources remaining that they have no immediate use for.

Artemis benefits from some nightmare training, becoming physically stronger. Then, not wishing to delay further, Olympus prepares to face the monster at the core of their settlement. Artemis, Aphrodite, Hephaestus, and Odysseus are chosen to face the mysterious watcher. They equip themselves with the best weapons and armor the settlement has available, before making offerings at the armor shrine to further bolster their resilience. All of the survivors gather together to watch as, taking deep breaths, the chosen champions enter the lantern hoard.
Posted by Craig Welter at 8:00 AM