Byron tumbles through the abyss until at last the darkness consumes him. He slowly regains consciousness in a dark and foreboding hallway. As his faculties return to him, Byron discovers a gargantuan knight in strange looking armor standing over him. The strangely-attired knight makes no attempt to harm the necromancer, and Byron is surprised to discover that he still possesses his two fragments of the gaunt summoner's amulet. Suddenly he remembers that his former companion would now have three of the fragments himself. Or would he? Would he have all of the rest of them by now? Byron had no way of knowing how much time had passed, or what might have become of the wight king he had previous allied himself with.

The knight helps Byron to his feet, describing himself as a "knight questor". The huge knight, who appears to be a devotee of Morr, explains that he is on a quest to slay the lord of the silver tower. Now that Byron is on his own and in need of a new ally who can provide some physical protection, he offers to aid the knight. So the two agree to cooperate in the quest for the gaunt summoner. They begin exploring the area of the silver tower they have found themselves in, which is a dark and macabre dungeon decorated with countless omens of death.

To Byron's surprise, his wight king companion finds him in the twisting passageways of the tower after searching tirelessly since their separation. Byron wonders if perhaps the wight king is more loyal to him than he realized, or if maybe it just didn't want to lose the fragment pieces Byron was carrying when they were separated. The three of them continue to quest together, though only Byron and the wight king know they need to collect more amulet fragments before they will be able to confront the gaunt summoner, and they do not intend to share that information with their new ally.

Eventually the champions come before a macabre gate of vast size and ominous aspect. It resembles a scrimshawed cage, wrought from the bones of countless birds. Within its arched conﬁnes dark shadows ﬂutter and trill, the shades of a million feathered things flitting back and forth. Seeing no other path to take, the champions swing those bone gates open and advance cautiously into the enormous cage. As the last of their number passes within, the gates slam shut with a terrible crash, and the avian shades descend in a screeching storm. The Byron and the knight cry out as they feel beaks and claws tear at their ﬂesh, their eyes, and their minds, while the wight king it largely unaffected. Then, as suddenly as the storm descended, it is gone, leaving the champions somewhere else altogether. 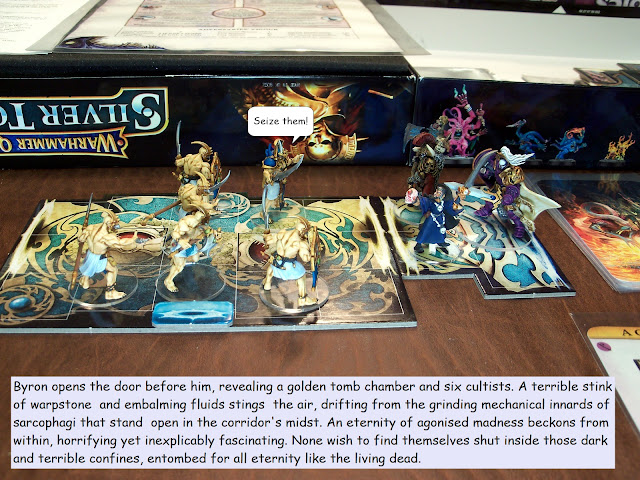 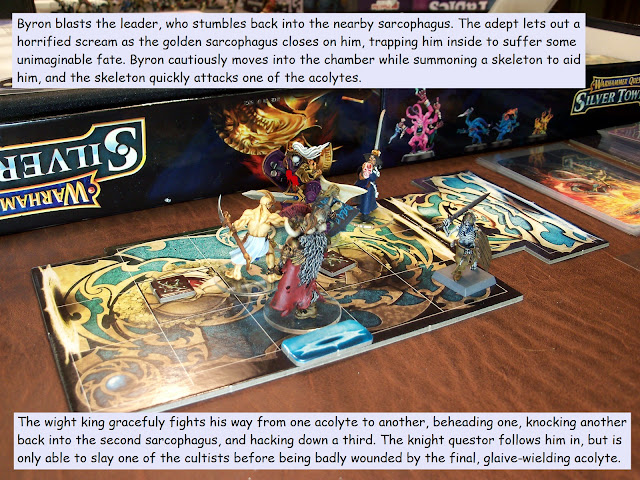 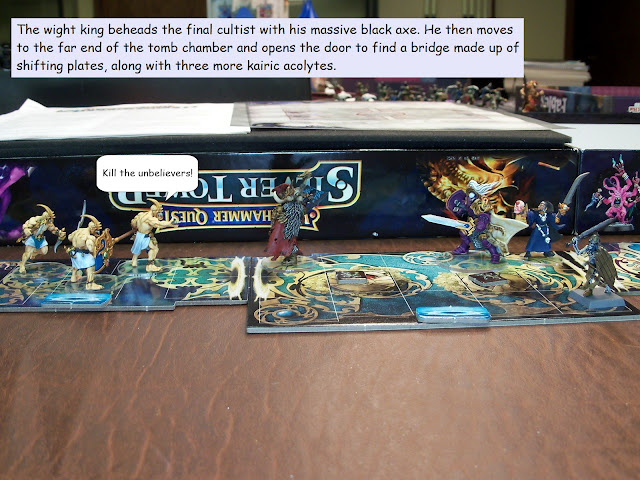 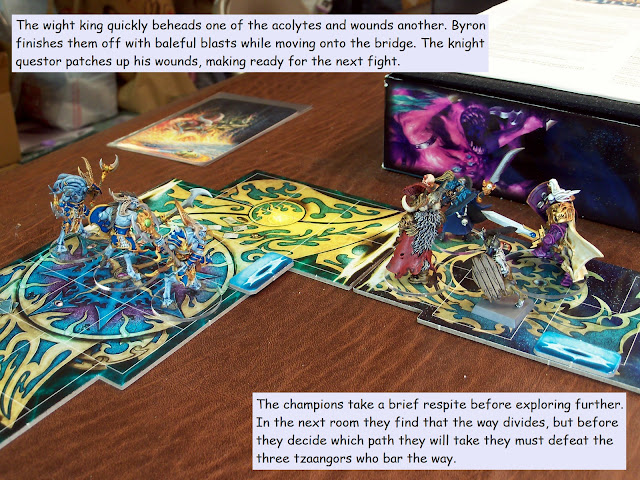 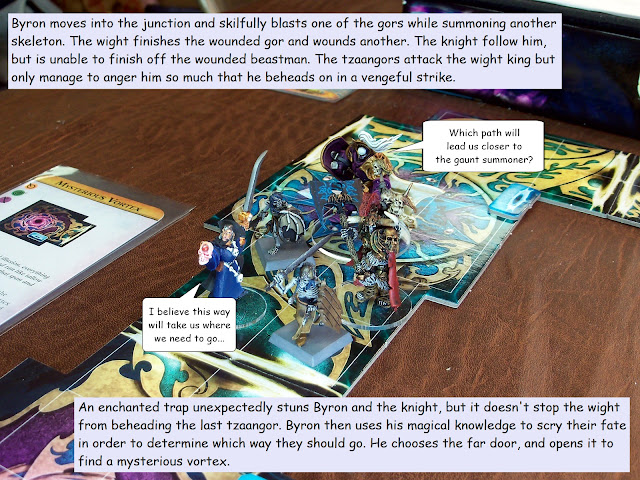 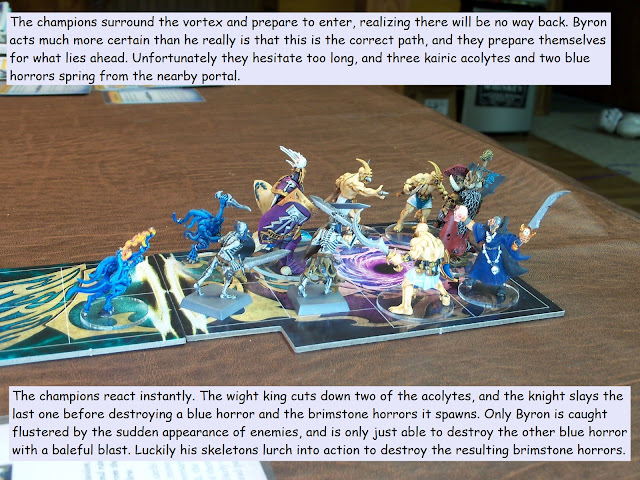 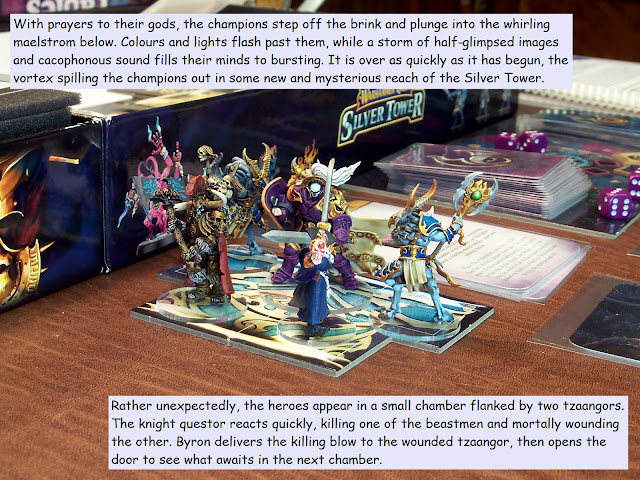 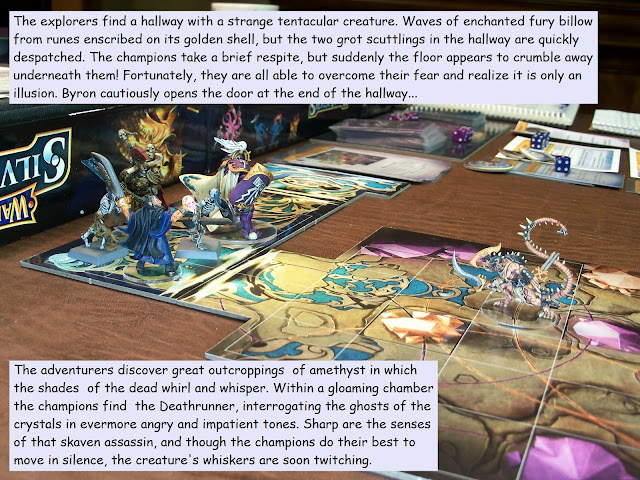 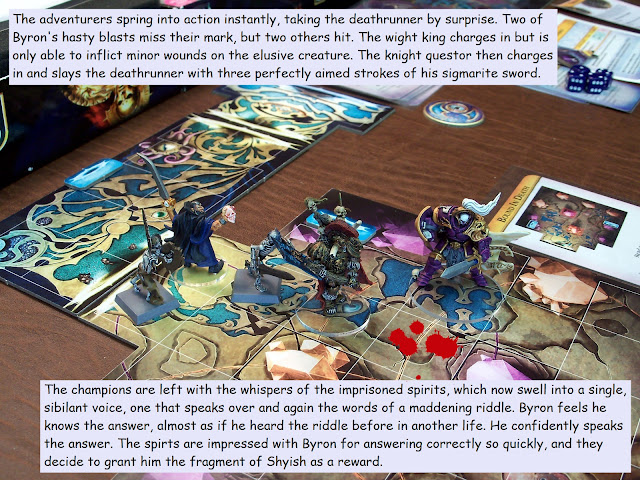 Byron worries that the knight questor might grow suspicious about the amulet fragment Byron seemed so happy to receive. Rather than explain the power of the amulet to the strange knight, Byron resolves to part ways with him. Byron explains to the knight that he and the wight king have decided they would rather search for an exit than try to find and confront the gaunt summoner. The knight then voluntarily take his leave of them to pursue his sworn quest to find and destroy the daemonic lord of the tower.

By this point, Byron has long since realized that each fragment of the gaunt summoner's amulet corresponds with one of the eight winds of magic. Byron and the wight king each carry three fragments now, leaving two more to obtain: Aqshy and Ghur. Byron and the wight king set off in search of areas of the silver tower that seem to be influenced by the winds of fire or beasts, while keeping an eye out for any potential temporary allies who might help them find the areas they seek.
Posted by Craig Welter at 8:00 AM