We rolled randomly for which side would go first, and the Vampire Counts/Beastman side won.

The Beastman 3rd Army captured the important town of Soude. The Beastman 1st Army, with the Beastlord, occupied the village of St. Mer-Eglise, while their 2nd Army moved South to support the 1st.

The forces of good mobilised quickly in their response to the invasion. The High Elf 3rd Army hung back to occupy the village of Aix En Provence and the High Elf 2nd Army moved north to create a supply base in the village of Nice. The High Elf 1st Army, led directly by Prince Tethelion on his mighty dragon, moved far to the Northwest to support the Bretonnian advance.

The Bretonnian 1st and 3rd Armies moved together to consolidate before their advance. The Bretonnian 2nd Army, clearly well-prepared for war and eager to take the fight to the enemy, stormed Northwards to attack the Beastman 2nd Army on the plains outside St. Mer-Eglise. 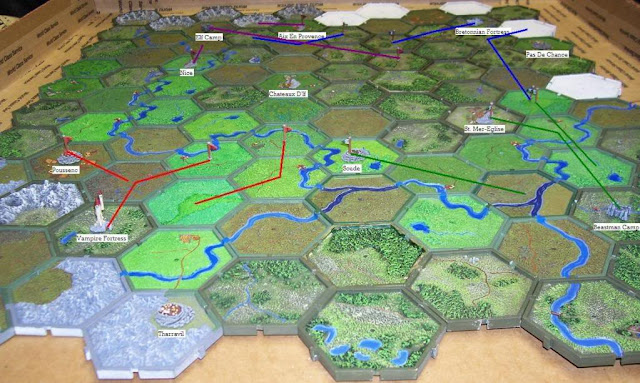 The Beastmen were caught unprepared and surprised by the swift response of the Bretonnians, and their 2nd army was massacred.
Posted by Craig Welter at 8:00 AM