The Bretonnian forces fighting in the Grismeire Valley had long been expecting some assistance from a band of Ogre mercenaries in the area. Their high Elf allies assured the Bretonnian command that the Ogres had been hired to assist in the campaign. Yet, so far the Ogres had done nothing but eat their way across the valley. Frederic Theobold, sensing the campaign was at a critical point, needed the Ogres to make their move. He sent a small force to find the Ogre encampment and convince their leader that it was time for the Ogres to earn their pay.

After a long day of marching, the Bretonnian force located the Ogre camp. As it was getting late, the Bretonnians made camp themselves, intending to meet with the Ogres first thing the next morning. They didn't know that The Master of the undead invaders had sent a force to make sure the Ogres would stay out of the campaign. In the dead of night, the undead approached the camp silently, zombies and skeletons rising from the ground in the middle of the camp. Driven on by the will of their Vampire leader, the undead automatons murdered the Ogres in their sleep, putting an end to the threat of the Ogre mercenaries.

As dawn broke the undead force, aware of the nearby Bretonnian camp, arrayed themselves for battle. Not expecting any trouble, the Bretonnians broke camp and approached the Ogre camp unprepared for a fight. Only too late did they see the army of undeath arrayed against them.

The Undead were deployed just to the right of the Ogre camp in a solid battle line consisting of, from left to right, Grave Guard, Zombies, Grave Guard with Great Weapons, and Skeletons with Spears. Behind the line was a unit of Skeletons with spears, containing two Necromancers and the Vampire leading the force. With the leftmost unit of Grave Guard was a Wight King bearing the army standard.

The Bretonnians were not well deployed. The mass of their infantry was clustered up far to the Vampire Count army's left, along with some questing knights, on the outskirts of the Ogre camp. Just across the field from the undead army, but more spread out, were two units of Knights, some peasant bowmen, and a unit of Pegasus Knights.
In the mission we played, each player had to roll for each unit to determine which third of their deployment zone the unit was required to deploy in. As the Vampire count player, I ended up with my entire army deployed in the center, while the Bretonnian player got stuck putting all his men at arms to his far right. 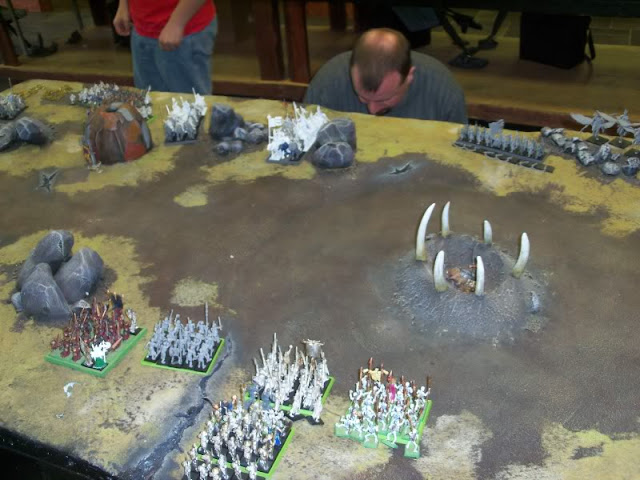 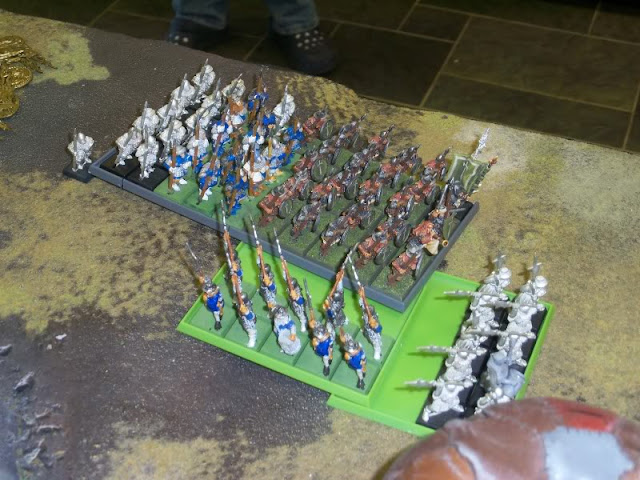 Seeing the predicament they had stumbled into, the Bretonnians wisely opted to pause to pray to the Lady of the Lake for deliverance. The undead took the time to reposition their line, anchoring their flanks between some large boulders on the left on a massive pit on the right. Surrounded by the aura of death created by the long night of slaughter, the winds of magic flowed strong from the Vampire. She raised more and more of the long dead from the ground, easily more than doubling the size of her zombie regiment. Her army was growing in strength every minute. 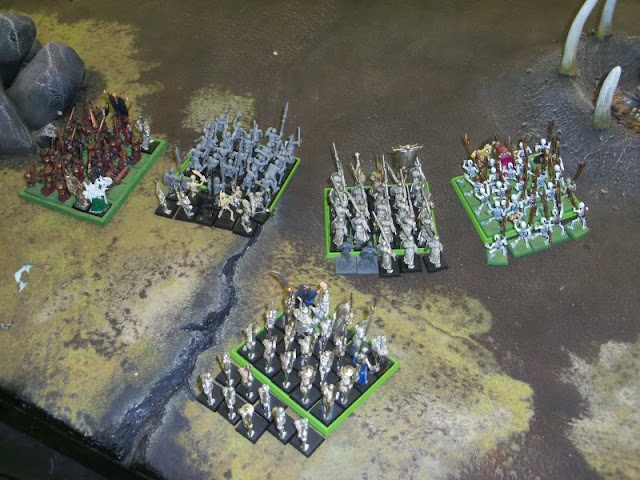 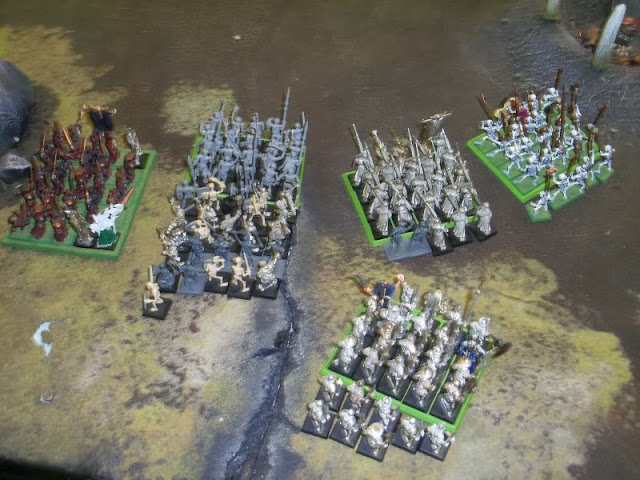 The Bretonnians were cautious in the face of this sudden threat. Their Knights would not charge off blindly, but would wait for their infantry support to make its way around the edge of the camp and onto the battlefield. The Pegasus Knights did, however, fly forward to begin making their way around into the read of the vampire line. The Bretonnian Prophetess proved to not be as lucky with the winds of magic this day. Perhaps overwhelmed by the power drawn by so much death, she suffered a catastrophic backlash of magical energy that killed nearly a third of the massive horde of men at arms around her. 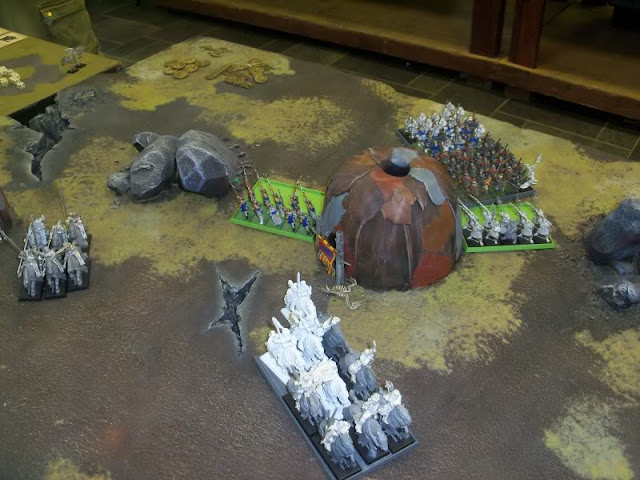 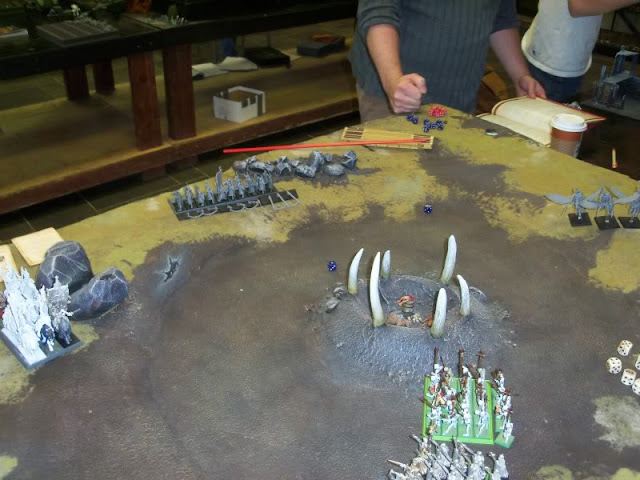 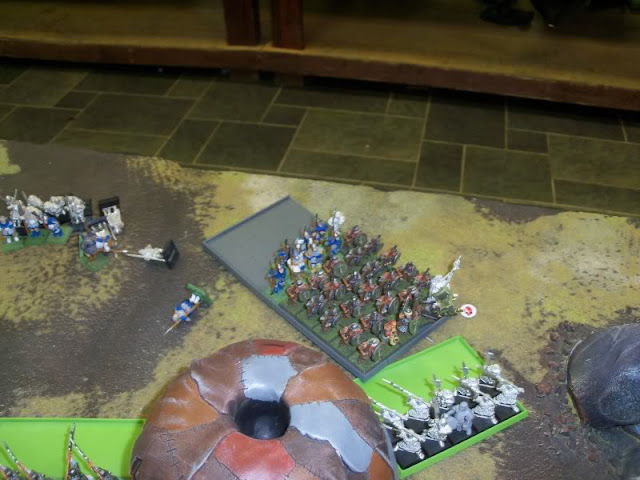 The Vampire mostly held, biding her time, knowing that her army only grew stronger as the Bretonnians took time to rearrange their army. Through her necromantic magics, she continued to increase the size of her zombie regiment, which was now four times its starting strength. She, and the necromancers accompanying her, were forced out of the skeleton regiment, which turn to its right to guard the leaders of the army from the pesky Pegasus Knights. Meanwhile, the Questing Knights and another unit of Knights began making their way around the boulders that anchored the right flank of the undead army. 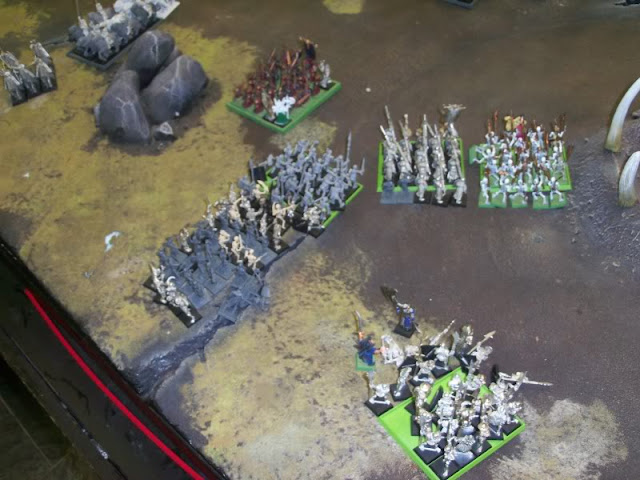 Denied the chance to take out the leaders of the undead army, the Pegasus Knights instead charged into the rear of the Skeleton regiment on the undead right flank, just as a full unit of Knights with the army standard bearer charged their front. The combat was swift and brutal, the surrounded and outclassed Skeletons were scythed down or crumbled to pieces as their hold on unlife was broken by the thunderous charge of the Knights. Back to the left flank, the Questing Knights held their position, wary of charging the what seemed to be an endless, and ever increasing, sea of zombies. The other unit of Knights turned around and headed back around the front size of the boulders, just as the Bretonnian Infantry was finally getting into position. 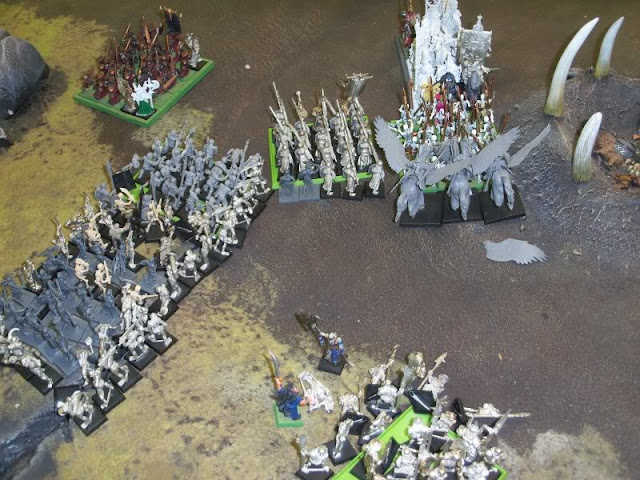 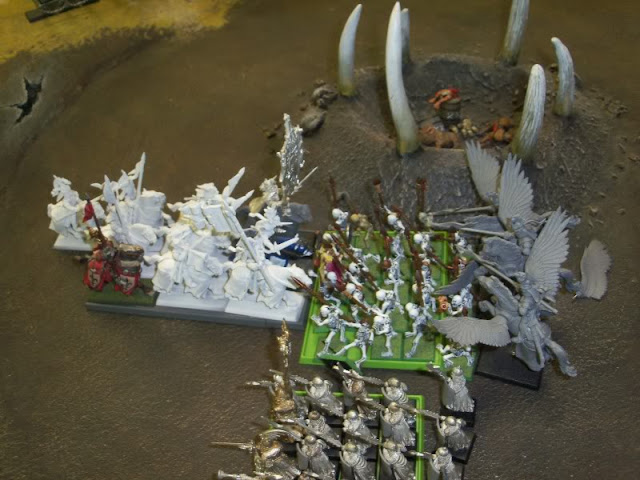 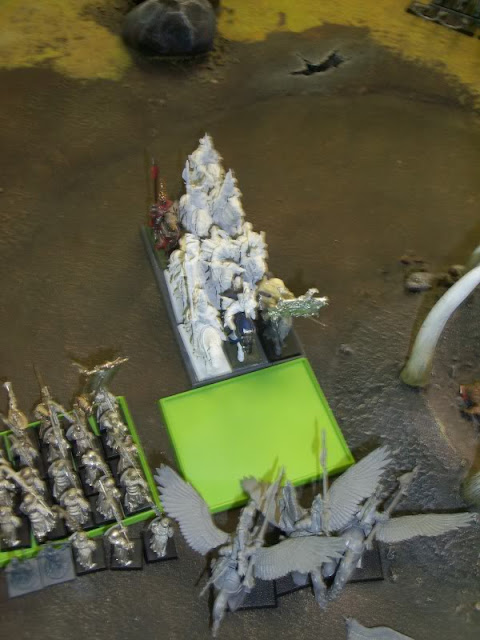 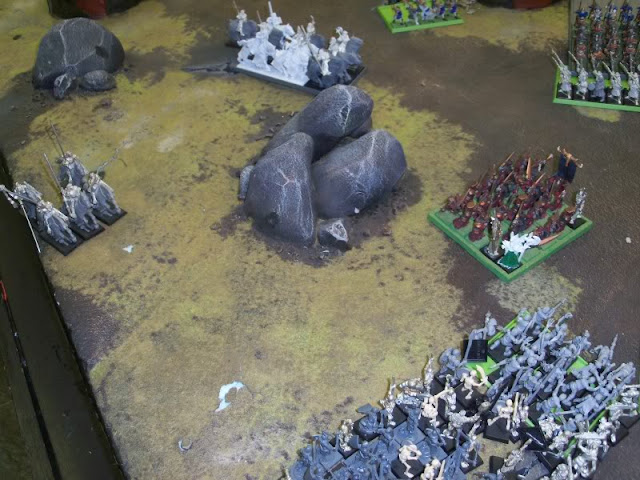 Pulling back on their reins, the Knights on the undead right barely had time to regroup and reform after wiping out the Skeletons before the nearby Grave Guard charged them. The Pegasus Knights turned around to face towards the Vampire and Necromancers, but their Skeleton bodyguard again blocked an attack. The Grave Guard and Zombies on the left flank turned to face the Knights and Questing Knights who threatened their flanks. Meanwhile, the charging Grave Guard with the great weapons overwhelmed the defending Knights, deprived of the advantage of having the momentum of the charge. The Knights turned to flee, but with seemingly supernatural speed the Grave Guard pursued them, hamstringing their horses before hacking apart the fallen riders. In the pursuit, the capture the standard of the Knights as well as the Army Battle standard, earning great glory for the warriors who had long since lost any ability to appreciate such feelings. 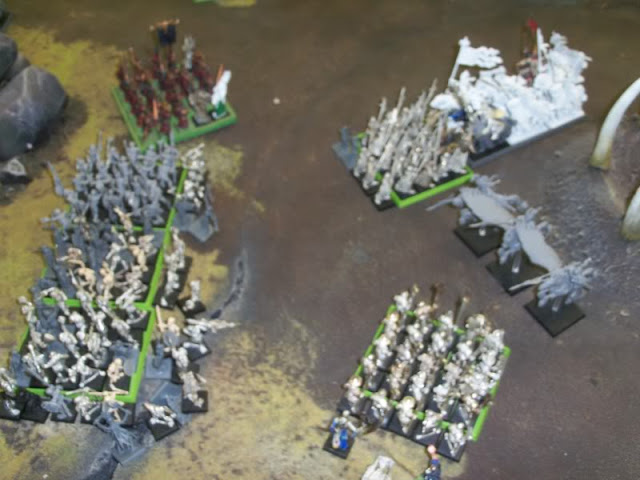 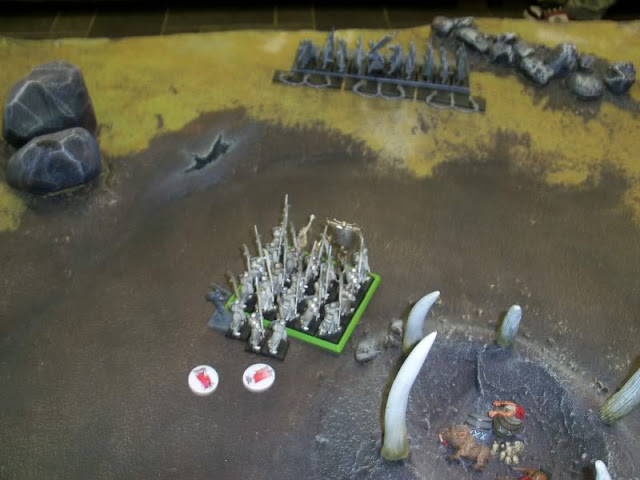 The tense, careful maneuvering for the slightest advantage was now at an end. The Grave Guard on the left, with the Army Standard bearing Wight Lord, could no longer avoid a charge. Fortunately for them, the horde of peasant spearmen had second thoughts and refused to charge into their flank. Still, a large unit of Knights with great weapons, including the Bretonnian General, and a small unit of men-at-arms with Halbers charged the Grave Guard in the front. Led by the Wight Lord, no doubt a long dead hero of Bretonnian history, the Grave Guard fought with incredible skill, and the Knights, uncharacteristically, were overcome with fear at seeing their potential fate. The Wight Lord cut down the frightened Bretonnian general, and two more of the Knights were cut down by the glowing Wight blades. Disheartened and afraid, the Knights and men at arms fled for their lives, causing the already skittish peasant spearment to panic and flee. 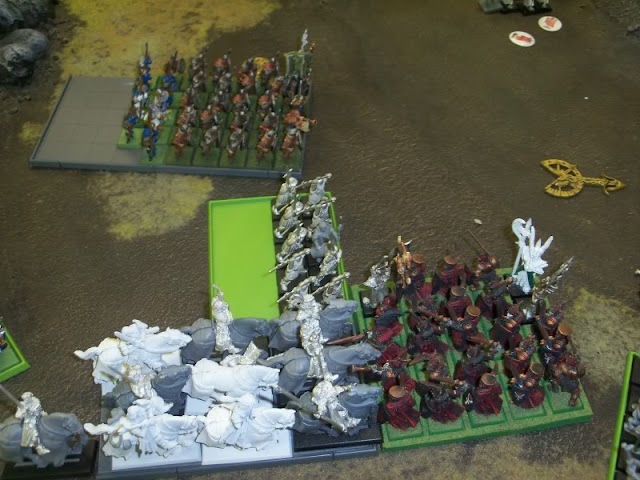 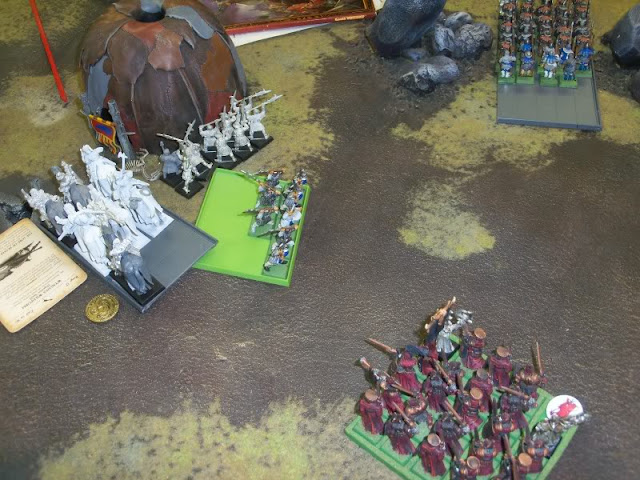 With most of the Bretonnian force now broken and fleeing, the Grave Guard on both flanks pressed their attacks. On the left, the unit with the Battle Standard charged and drove off the other small unit of men-at-arms with halberds, killing most of them. On the right, the Grave Guard with great weapons charged the bowmen, making their way through a hail of arrows and clamboring over defensive stakes to get at their enemy, but none of it was enough to stop them. They soundly defeated the bowmen, who fled the battlefield and scattered.

Elsewhere, the Vampire general rejoined her unit of Skeleton bodyguards who, thanks to the unholy power of VanHel's Danse Macabre, were able to catch up to and charge the Pegasus Knights. They fought valiantly, their champion (and his trusty mount) managing to cut down the Vampire general, but the result was never in doubt. Overrun by ranks of skeletons, the surviving Pegasus Knights fled the battlefield, soaring high into the air to escape the Skeletons. Adding to the catastrophe for the Bretonnians, the Questing Knights grew impatient and frustrated as the battle turn against their army and, wishing to capture any small amount of glory, couldn't resist charging the massive horde of zombies. 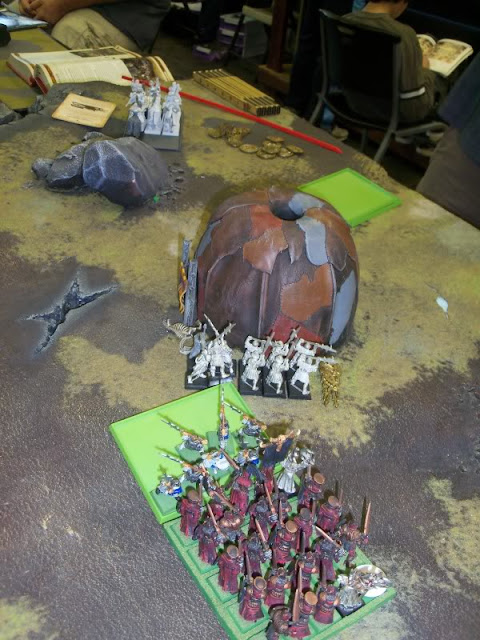 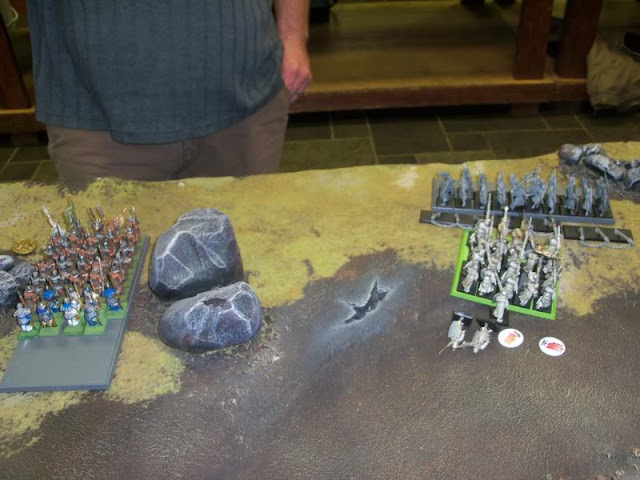 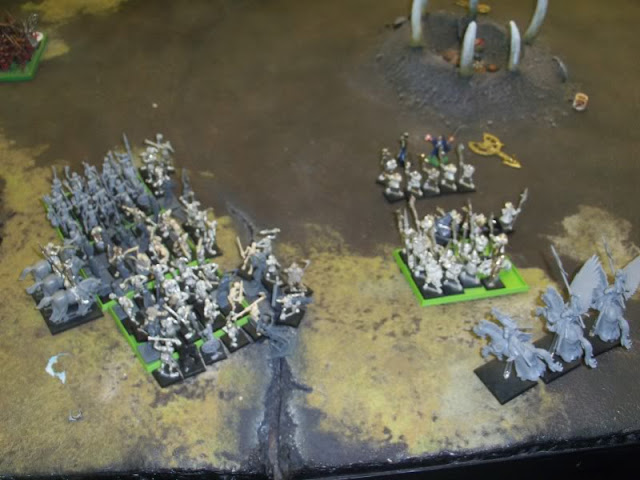 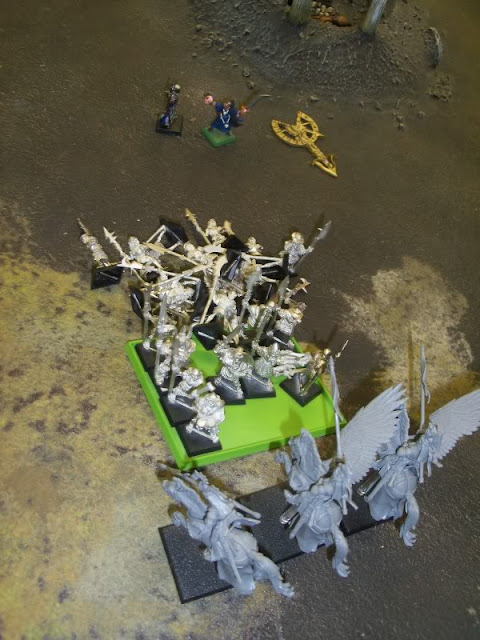 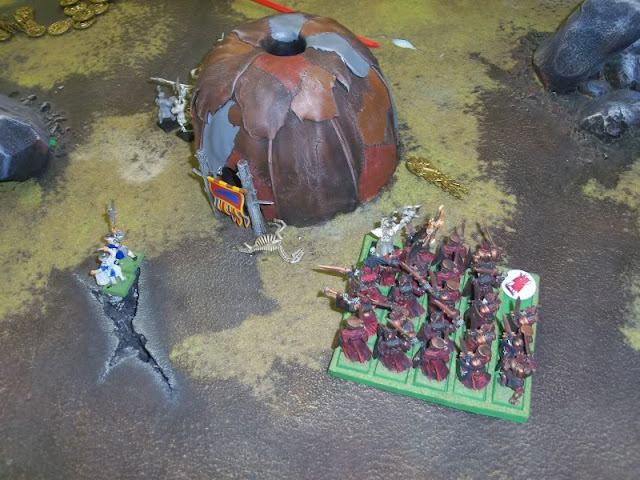 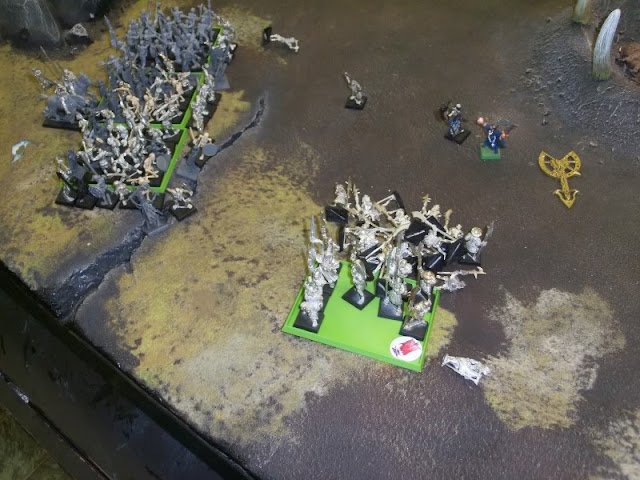 The Grave Guard with Great Weapons returned to the field of battle, having scattered the bowmen to the winds, but there were no more enemy before them. Despite the loss of the general, the fleeing Bretonnian Knights reallied, but there was little they could do. 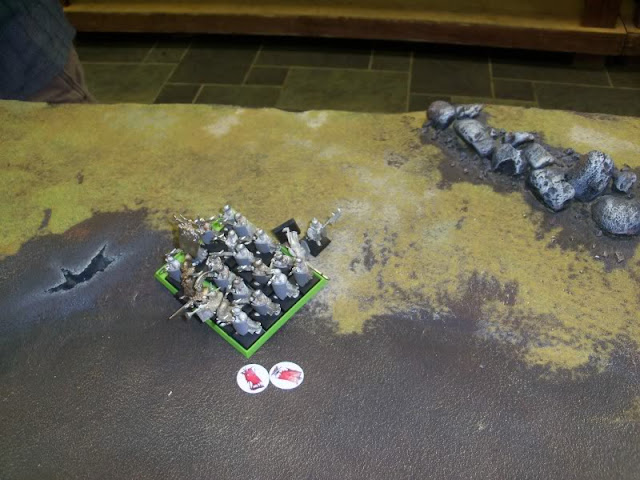 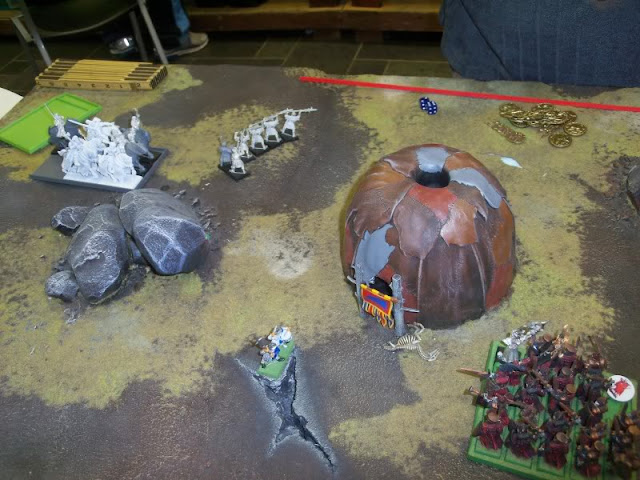 Though completely outclassed, the massive horde of zombies eventually swarmed, dragged down, and devoured the Questing Knights. All that remained of the Bretonnian force was the rallied remains of a single unit of Knights, and many fleeing peasants who would likely never be seen again. It was a great victory for the Vampire Counts. Not only had the completed their mission to eliminate the Ogre Mercenaries, but they had nearly wiped out a Bretonnian force they had not expected to encounter. 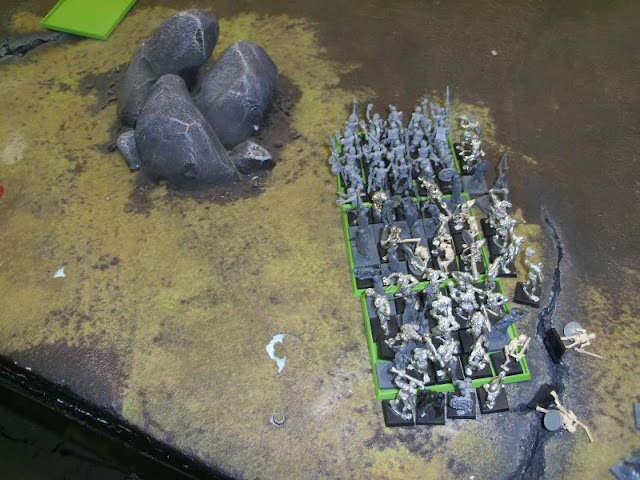 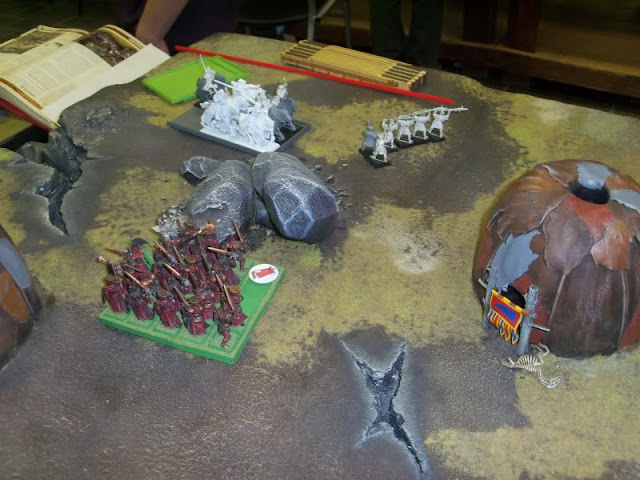