A Union division and a Confederate division approach each other cautiously through a vast woodland. Each commander is performing a reconnaissance in force, probing the wilderness for signs of the enemy. As such they don't know where they will encounter the enemy or in what strength. In addition to seeing off any enemy they encounter, they will be well served by occupying and holding onto any tactically valuable positions in anticipation of a potential escalation in the fighting.

The Scenario
The rules were Black Powder by Warlord Games. We used a few of the rules from the Glory, Hallelujah supplement, most notably the rules for light woods. These allow formed infantry to move at half rate (skirmishers at full speed) and limit visibility to 12". It also provides cover against all small arms fire. I'm not really sold on most of the other rules from that supplement. You can check out my review of it here.

The scenario came from the book Musketry Like Thunder: The Greatest Civil War Battles Never Fought by Brad Butkovich. The book contains 11 generic scenarios (IE not meant to represent a specific historical battle) intended for any rules that have the regiment as the basic unit. The scenario we played is called Surprise in the Forest, however I altered the suggested forces somewhat to match what I have. The opposing forces start basically in opposite corners, with a road running from one to the other. There is one objective in each corner, which are worth victory points in addition to any points for breaking enemy units. The difficulty is that the entire board is covered in light woods, except for a farm and the roads. This makes any movement off road much slower, and makes the roads particularly crucial.

The Forces
The forces were pretty much even. Each side had two infantry brigades of five regiments, with one on each side being elite. Each side also had one cavalry brigade of two regiments. For all brigade officers and the division commanders, we randomly generated officers by drawing from my Black Powder officer personality card decks. The results are shown below.

The Union division was led by Major General Joseph J. Bartlett, with a Staff Rating of 8 and high Aggression. His division consisted of: 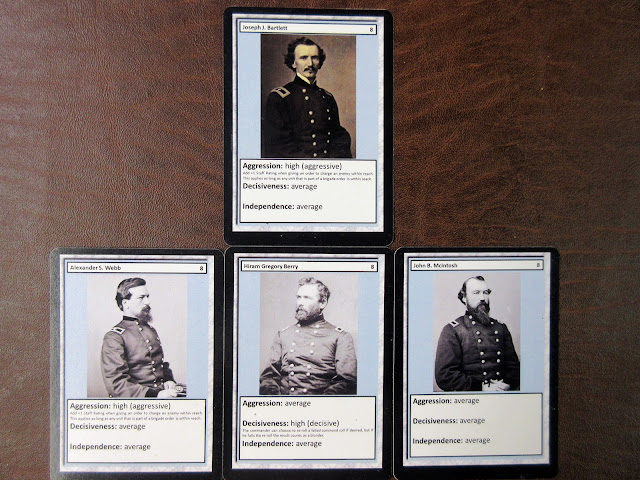 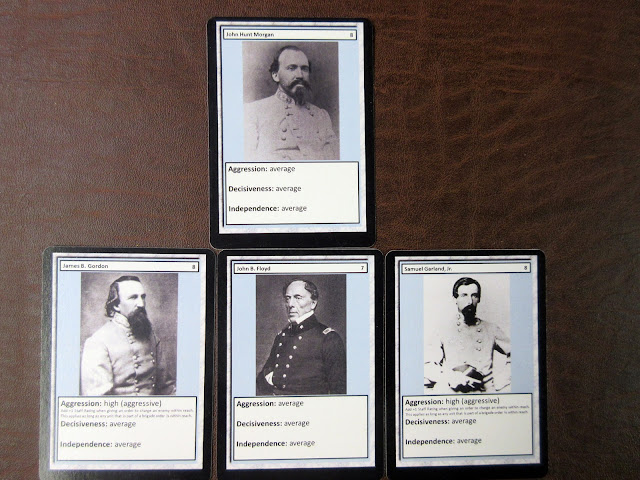 The Setup
As you can see below, the battlefield was square and entirely covered with light woods, except for the roads and the farm in the Union corner. Each side had to keep one infantry brigade off the table, which could be ordered on starting on turn two, arriving on the road. The confederates had the option of their brigade waiting until turn 3, then arriving on the road on the far side of the hill, closer to the enemy, which is the option they chose. The remaining forces were deployed within 24cm of the table edge, and only up to halfway along the edge so that the forces began in opposite corners. The two objectives which were worth victory points to the army controlling them were the hill in the Confederate corner, and the farm in the Union corner.

The union start with their cavalry brigade travelling along the road, with the Iron Brigade deployed in the woods on both sides of the road. The Confederates started with the Texas Brigade in column on the road, with the Tennessee cavalry off in the woods. Setting turn limits for scenarios is tricky in Black Powder, since bad command rolls can results in a some turns with no movement, but we figured we'd play for 10 turns then calculate victory points for broken regiments and brigades and for holding the objectives. With that, we got started, the Union (having won a roll off) going first. See the pictures below to see how it all played out (click an image for a larger version). 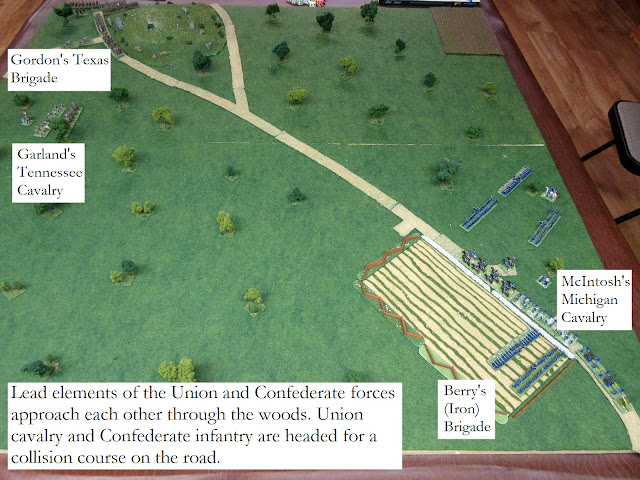 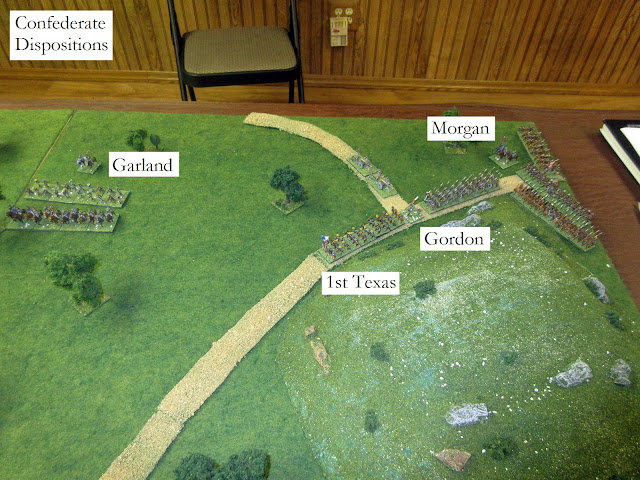 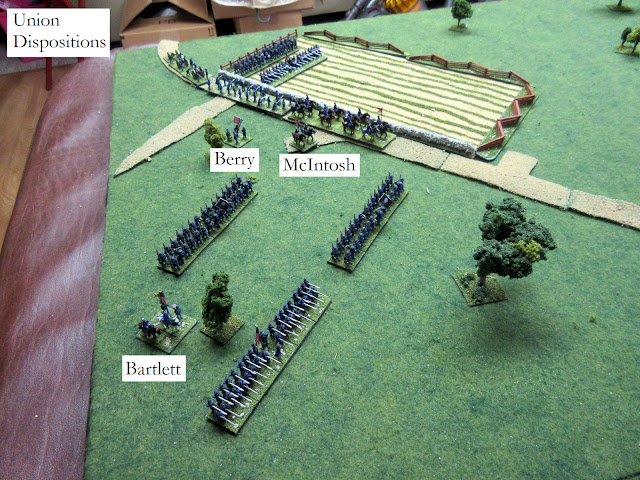 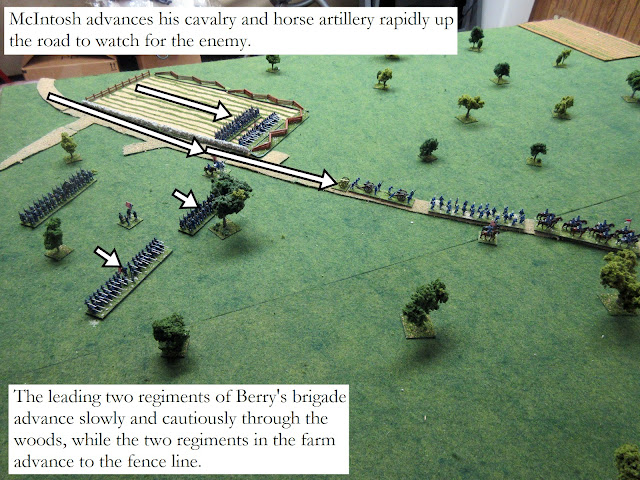 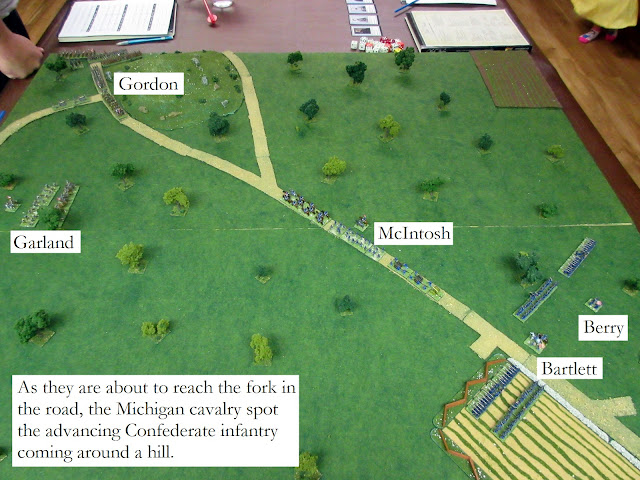 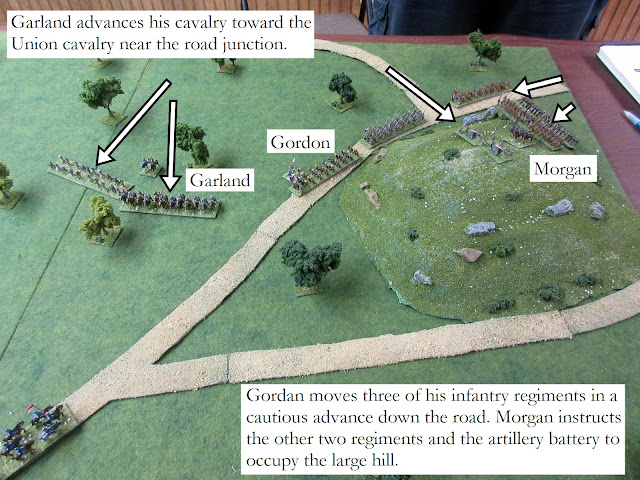 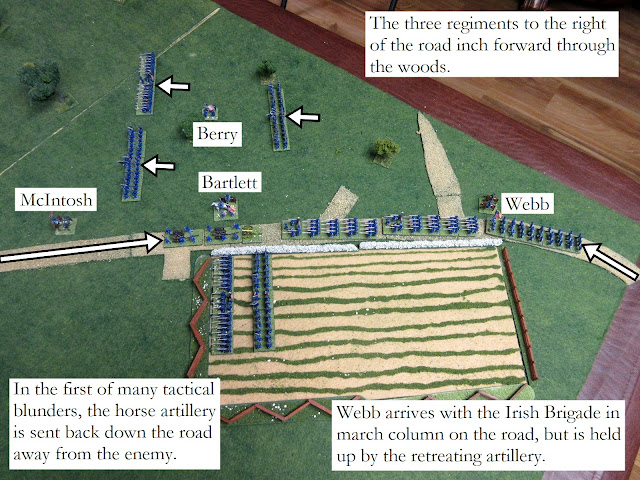 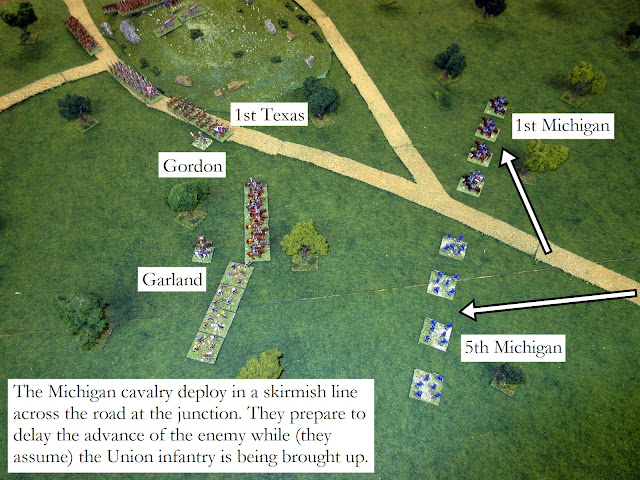 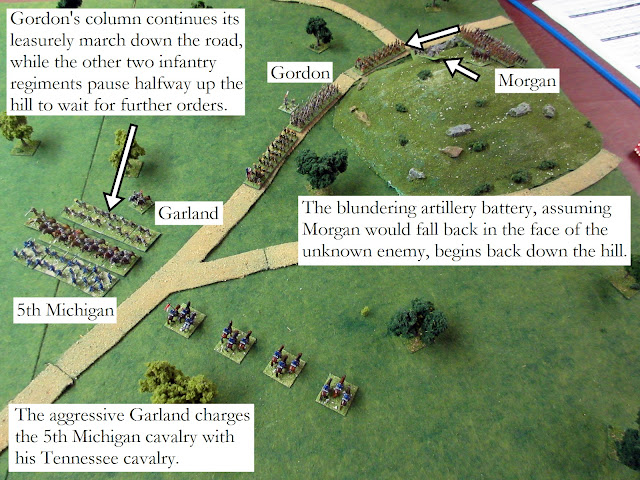 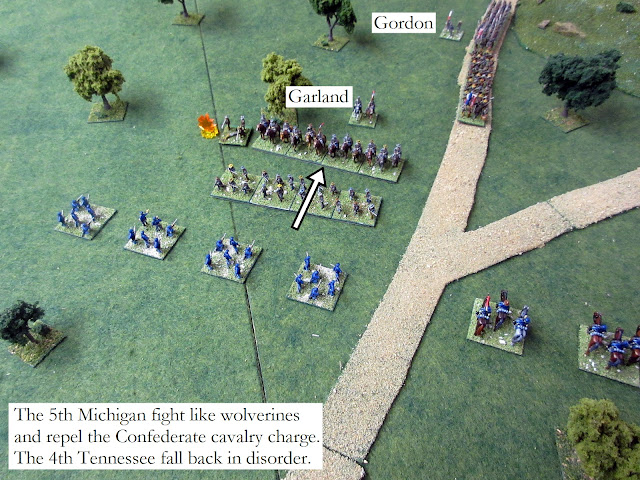 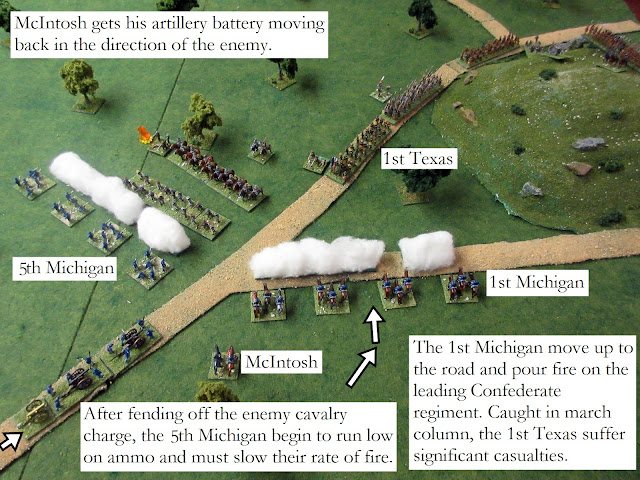 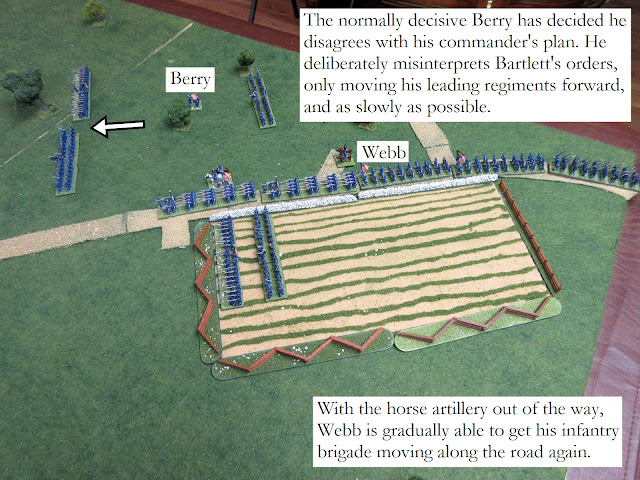 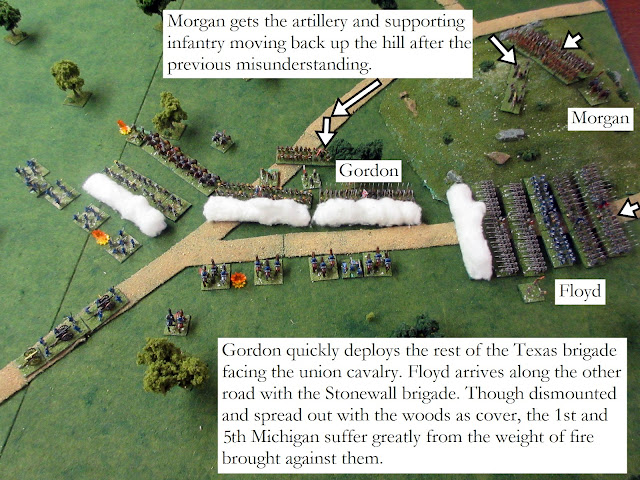 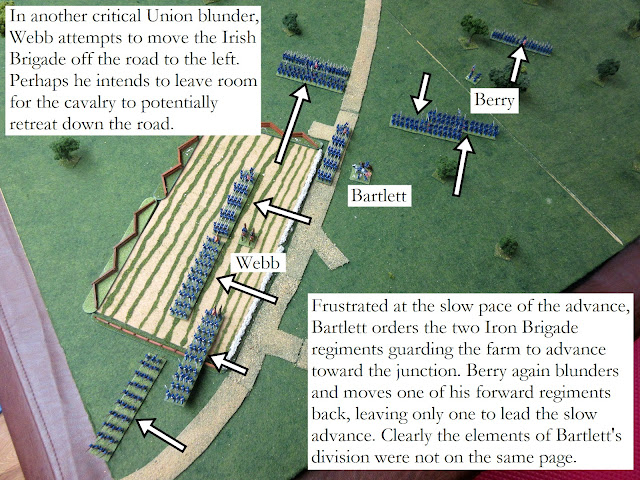 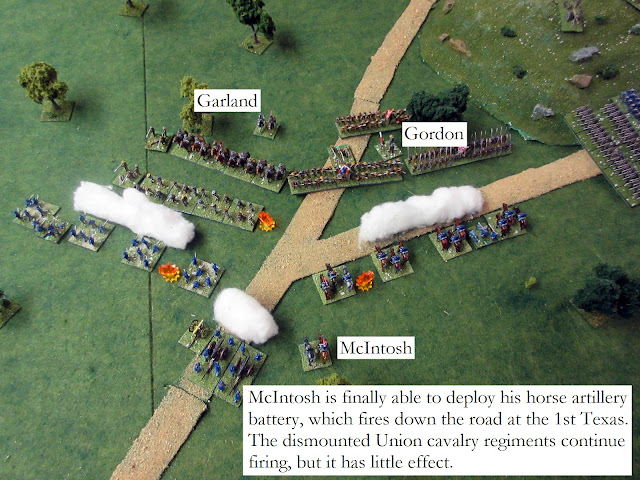 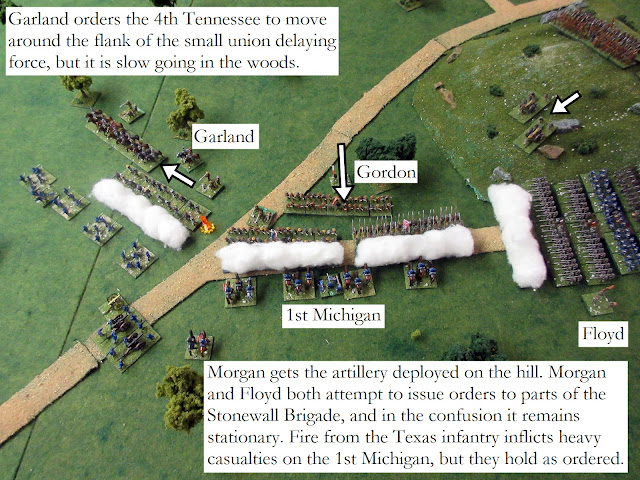 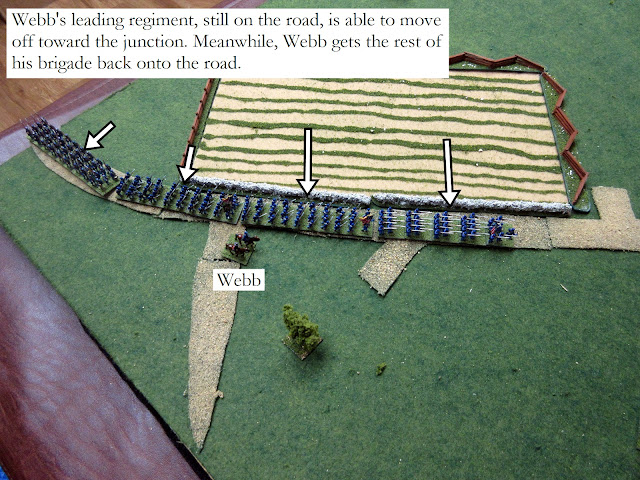 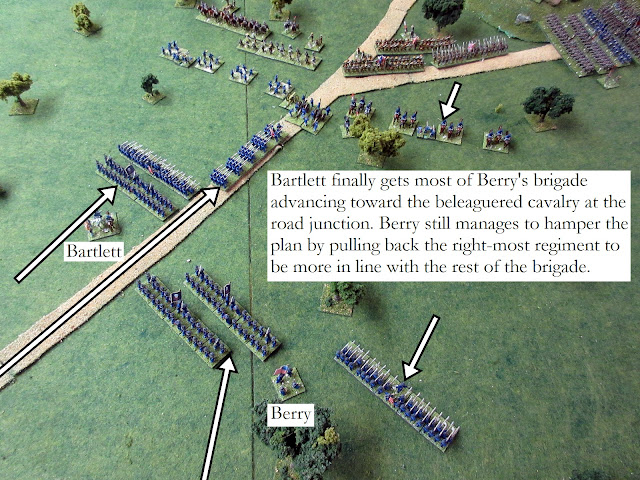 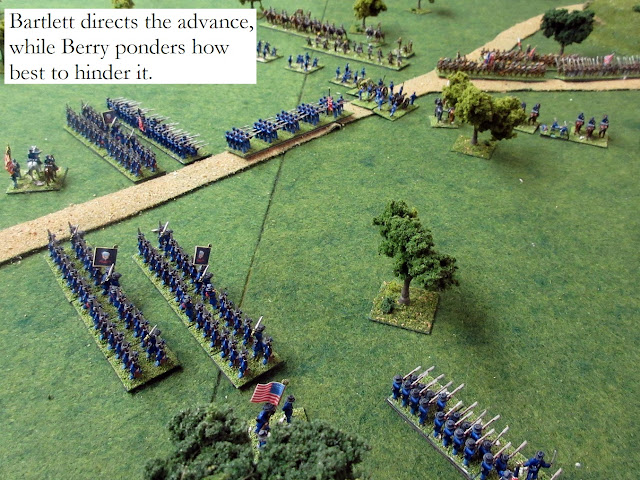 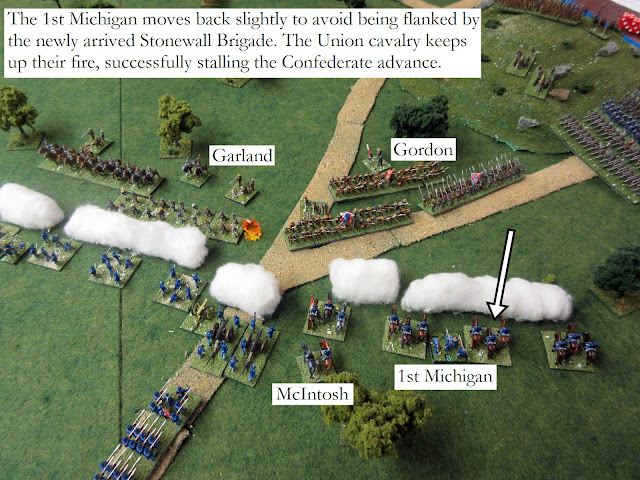 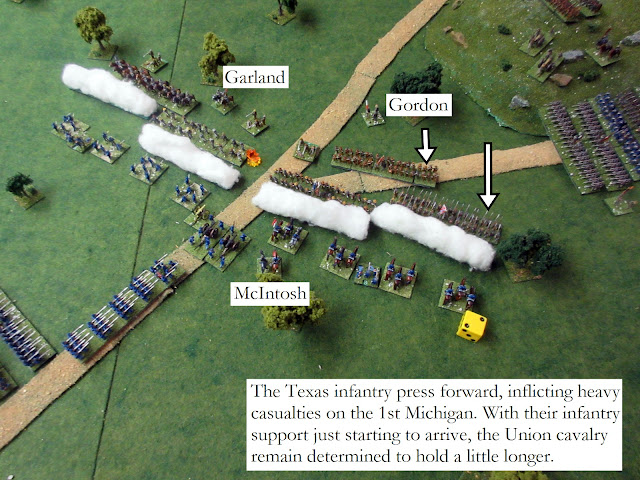 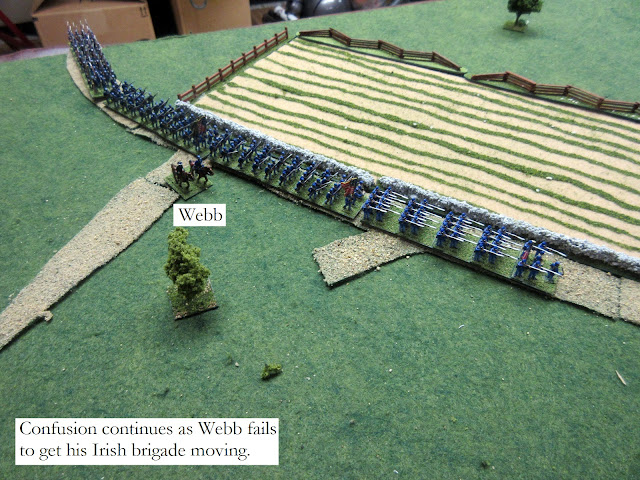 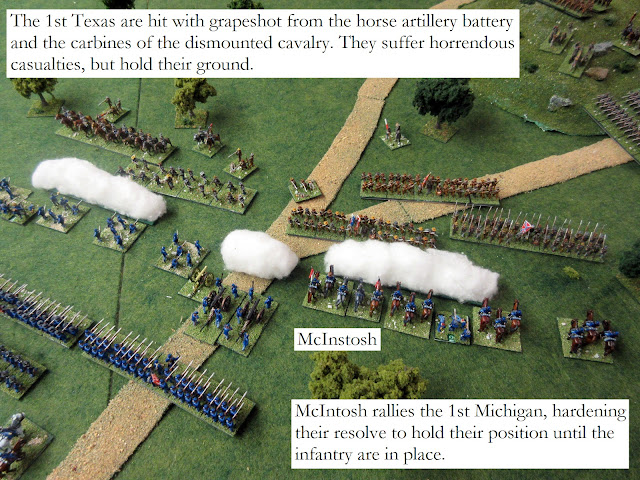 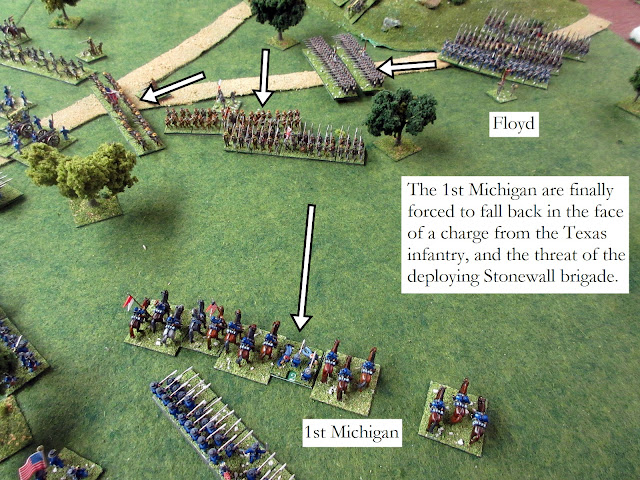 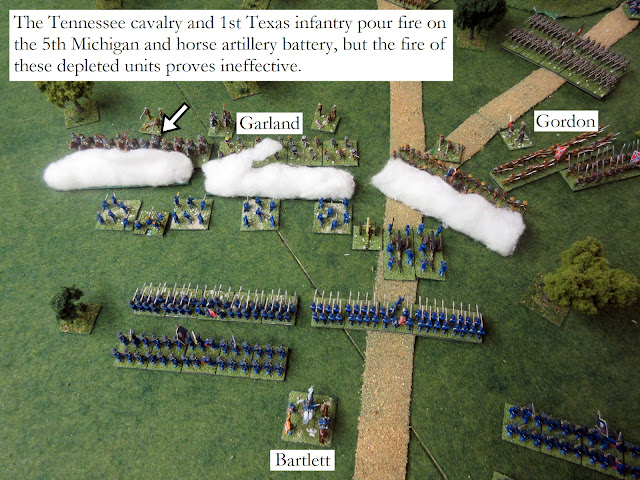 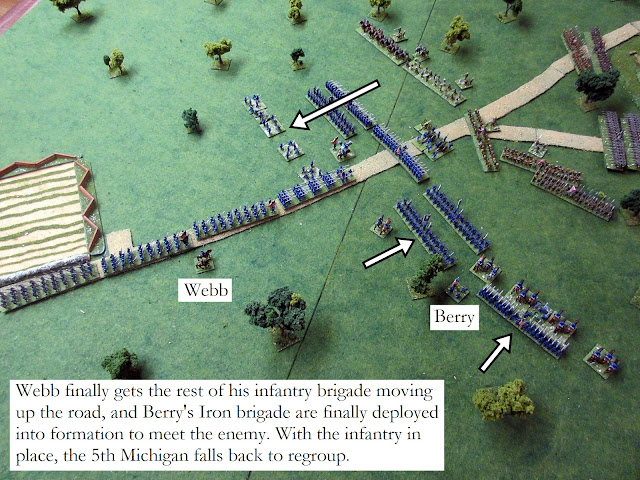 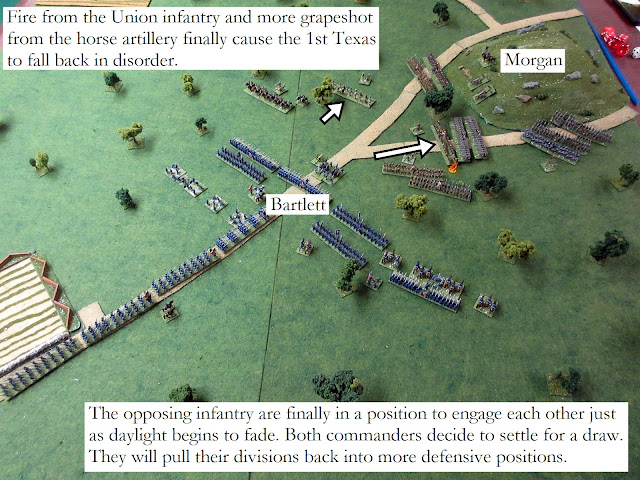 We had intended to play at least 10 turns, but ran out of time and had to pack it in after only (I think) 6 1/2. Since I'm always gaming with friends who I rarely get to see, we typically spend a lot of time talking and the games take way longer than they otherwise should, so we weren't able to finish. Having to cut the game short, combined with some atrocious command rolls and the difficult terrain slowing movement, meant that the battle was really just starting to unfold by the time we had to call it quits. At the end, the cavalry regiments on both sides were pretty much spent, as was the 1st Texas, but everything else was fresh and just about to get into action. It would have been interesting to see how things would have unfolded from here. Well, maybe we could start from this point next time and see what happens.
Posted by Craig Welter at 8:00 AM