Aphrodite and Artemis prepare to take two other survivors, Romulus and Remus, out on their first hunt. They will seek out a young phoenix so they can start building up the resources needed to build a suit of phoenix armor. Aphrodite wears screaming armor and a forsaker mask, and carries the steel sword and a beacon shield. Artemis wears rawhide armor and is armed with a cat gut bow and claw head arrow. Romulus also wears rawhide armor. He also bears the cat eye circlet and carries a counter-weighted axe and beacon shield. Remus wears a full suit of lantern armor, giving him great confidence for his first hunt, and it armed with a whistling mace and some bone darts as backup.

As they begin their hunt, a creaky carriage approaches the survivors. Richly appointed in red and gold, the carriage is carved on every side with lurid faces. A massive eye adorns the front, while the door of the carriage is a waiting open mouth. Out of a small window, a gnarled hand beckons. The survivors decide not to risk entering the wagon. Upon entering the territory of the phoenix they are pursuing, the party is beset by a tunnel of gushing wind, but they lock arms and easily push through the gale.

The survivors press on and eventually pass a forlorn fountain in the shape of a lion face. A stream of crystal clear water flows from its mouth. Each survivor consumes the water, the refreshing liquid bolstering their courage and will to survive. Artemis douses her head, and the bracing water brings her new clarity, eliminating her pathological need to behave honorably towards monsters.

Without warning, a massive shadow passes over the survivors. They look up and catch a glimpse of the indecipherable shape of the phoenix disappearing into the darkness. Time drags, and it feels to the survivors that the hunt is lasting much longer than it should. While time is slowed, the survivors have a much more eventful than usual journey. First, a pair of cupped stone hands rise out of the ground. The hands hold clear, cold water that trickles through the stone fingers in a seemingly endless supply. Artemis, Roumulus, and Remus all drink from the stone fountain, gaining courage.

Next, the survivors pass through an area where a great battle of dominance between two enormous antelope has left the stone-faced ground gouged with criss-crossing scars. Aphrodite, Romulus, and Remus all trip over the jagged ground, tearing muscles in their legs, which will prevent them from dashing in the coming encounter.

Finally, there is a great rush of air followed by a booming voice. A word is spoken in an unknown language by an inhuman voice. Just for an instant, the survivors understand. Artemis and Romulus gain some understanding, but Aphrodite and Remus do not hear the word, as they are both deaf (Aphrodite permanently, Remus from wearing the lantern helmet). Pondering the word also causes Artemis to gain a mental disorder, becoming quixotic, so she gains strength from her insanity and belief in herself.

Having traveled through the strange time dilation, the survivors finally find the young phoenix they have been pursuing. 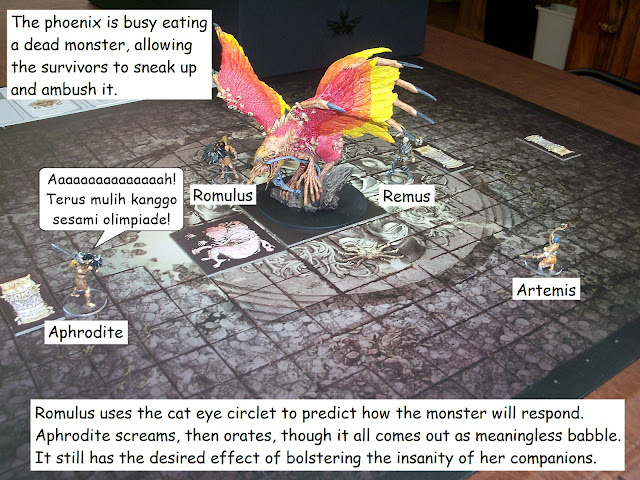 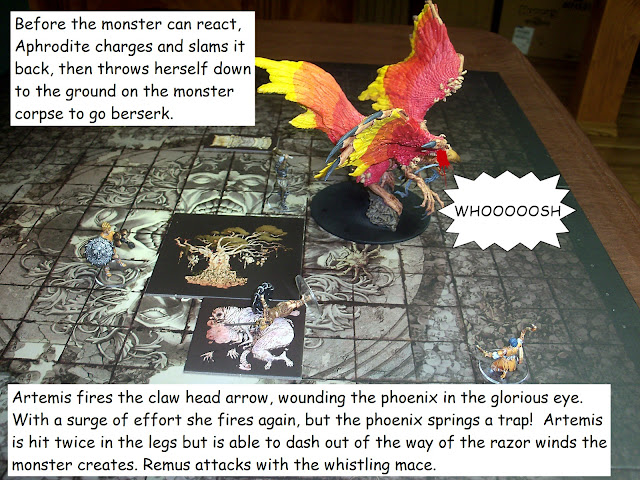 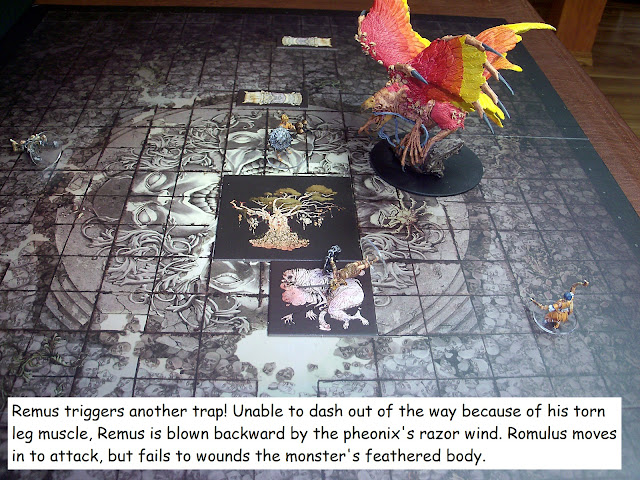 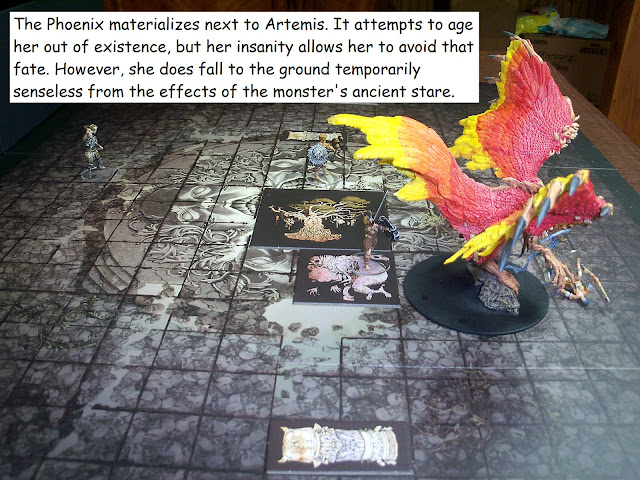 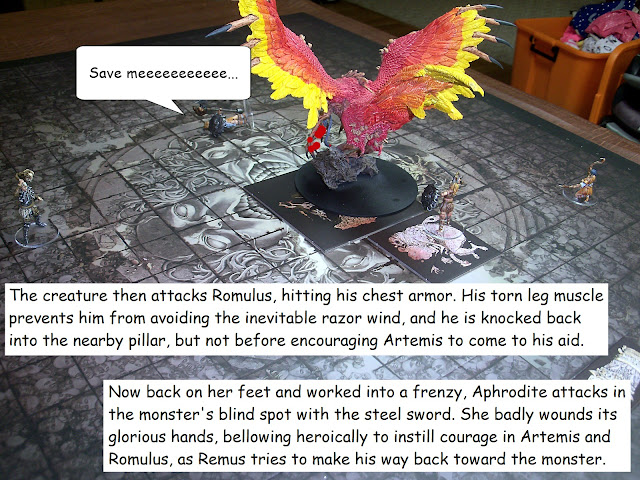 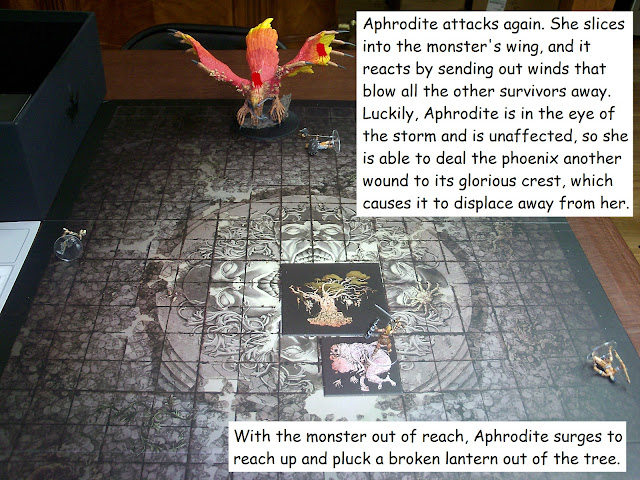 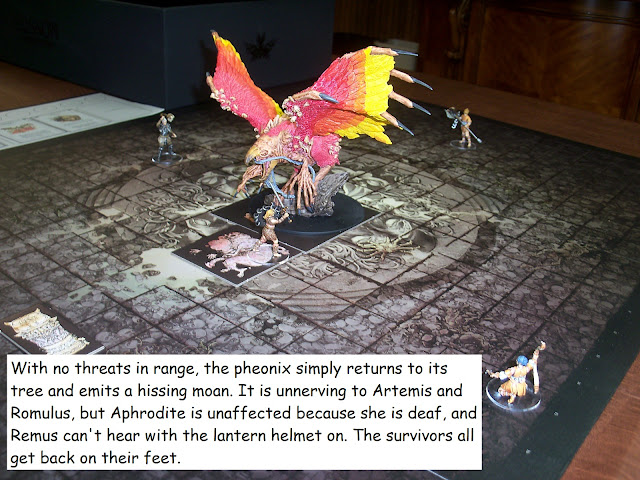 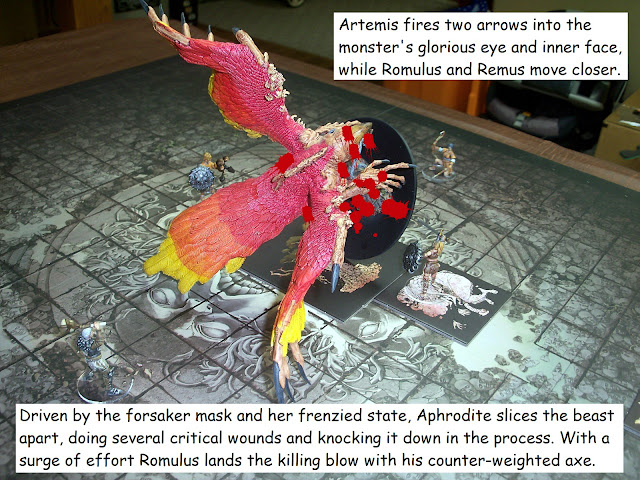 After years of perfecting her skills, Aphrodite masters the use of the sword enough that she can now teach the entire settlement how to better make use of them. The survivors take what resources they can from the defeated phoenix and return to Olympus, arriving during yet another heat wave. Aphrodite, Romulus, and Remus all suffer heat stroke carrying their heavy gear back to the settlement through the oppressive heat. It will take them some time to recover their strength, preventing them from participating in a fight in the next lantern year.

The unusual heat irritates the survivors and causes existing tensions to flare, and a rivalry erupts between Aphrodite and Romulus. They come to blows, beating each other up so badly that, even if they hadn't been suffering from the heat stroke, they would both be too injured to do any hunting for some time. The rest of the settlement endeavors to find some fluid to give them relief from the heat, and they find enough to gain some comfort and regain enough strength to be able to carry heavy gear on the next hunt. However, the heat makes it impossible to concentrate, preventing science or education endeavors.

Odysseus, the son of Dionysus who inherited the Twilight Sword, and the other Remus (Lanterna), son of Athena II, both paint some battle paint on their faces to build up their insanity, hopefully helping to cushion them from the madness they will no doubt encounter once they venture out from the settlement. Odysseus also spends some time to learn how to play the drums which increases his will to survive.

The settlement then prepares for another hunt. They know they will need to hunt larger game if they want to collect enough resources to create a full new set of armor with greater protection than their rawhide suits. They also want to continue to allow some of their newer survivors to gain some experience and become proficient monster hunters. They decide they will hunt for a mature (level 2) phoenix. Artemis will lead the hunt, bringing along the mighty Hephaestus and also the inexperienced first-timers Odysseus and Remus Lanterna.
Posted by Craig Welter at 8:00 AM