The mercenary companions have managed to obtain the Blood of Gaea, but they know there are other forces in this adventure seeking to gain possession of it. Roma and Venezia are about to go to war and the beholder of the Blood of Gaea is likely to reap a huge advantage in the battle that will shortly break out. The companions are heading to Bologna and they have set up camp. All of a sudden a silence falls over the forest and from the midst of the darkness, the now familiar shadows of the Venetians emerge, at the service of Venezia. They have sprung an ambush! Will the heroes be able to react in time?

Luckily, the heroes have been on alert, expecting to run into some trouble on their journey. They sleep fully armed and take shifts on watch, so that at a moment's notice they can all spring to their feet fully armed and ready to meet the attack head on. 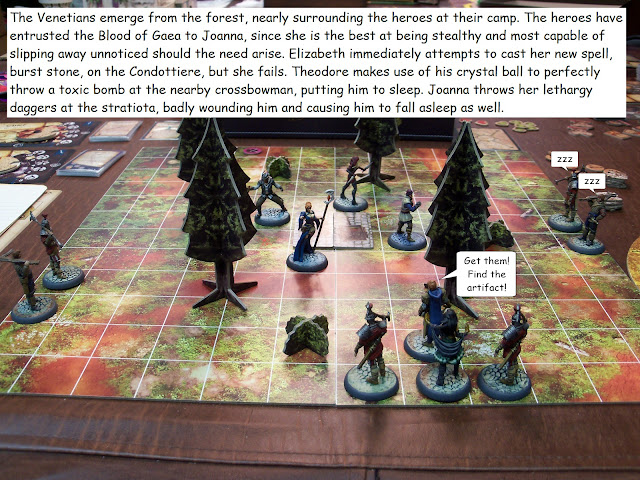 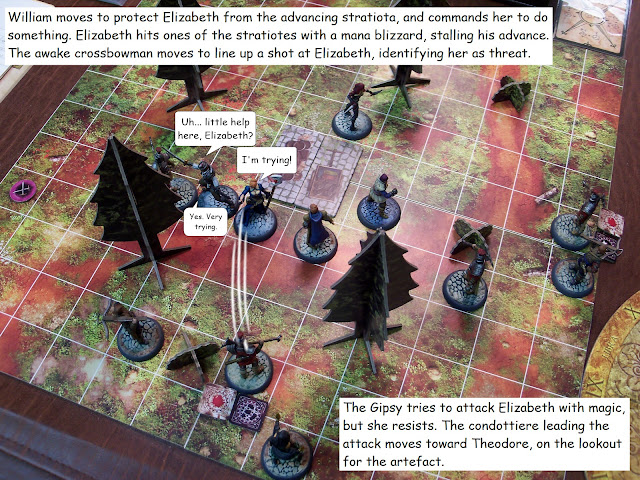 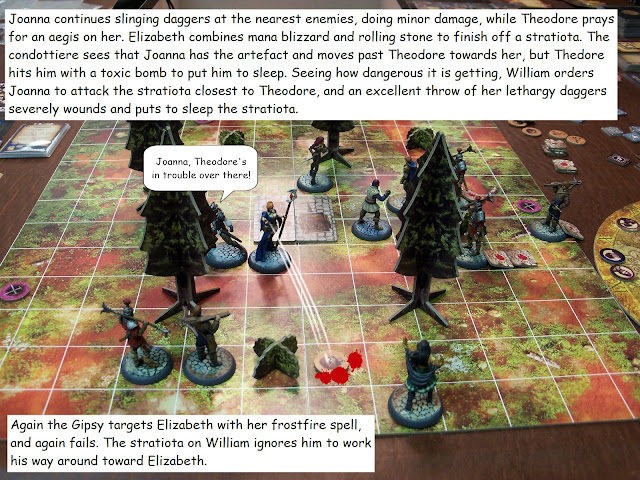 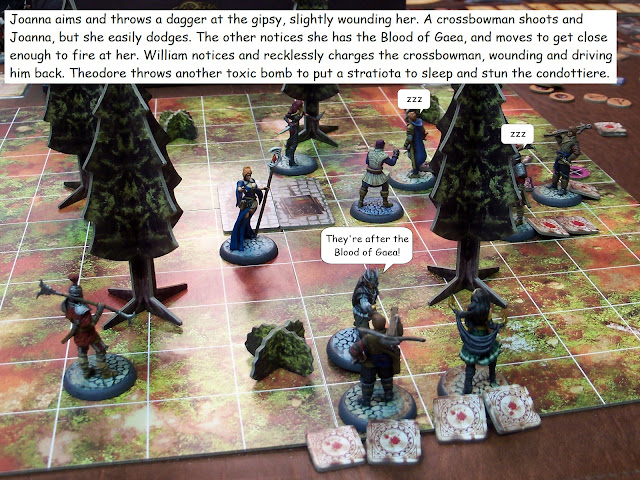 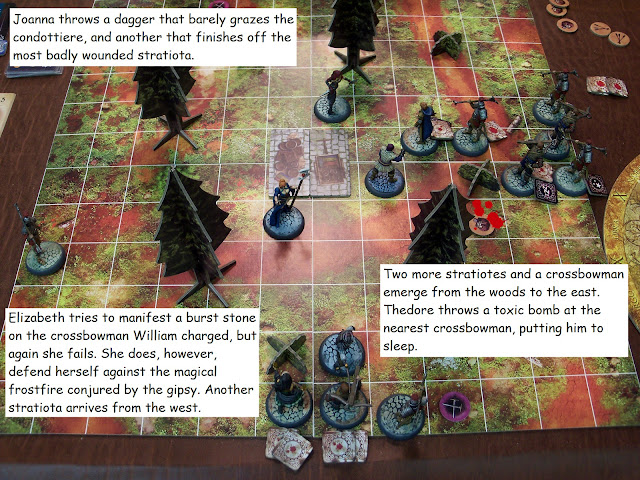 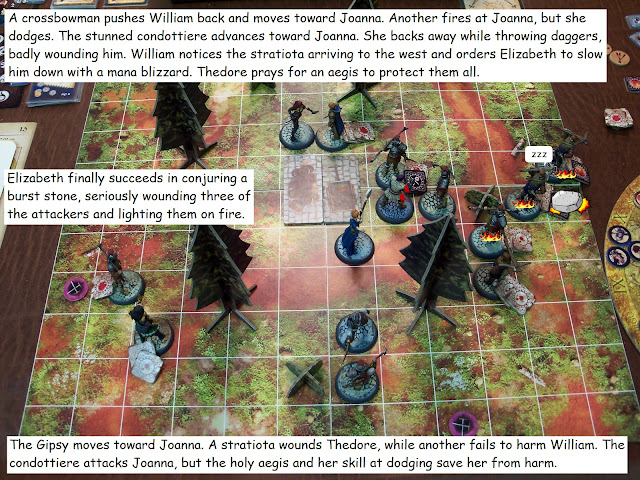 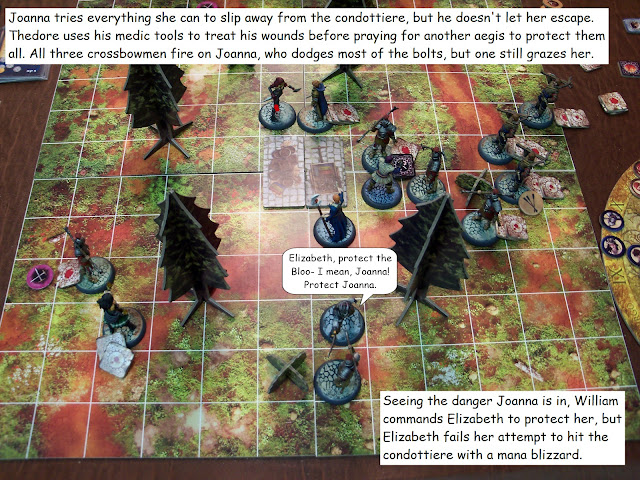 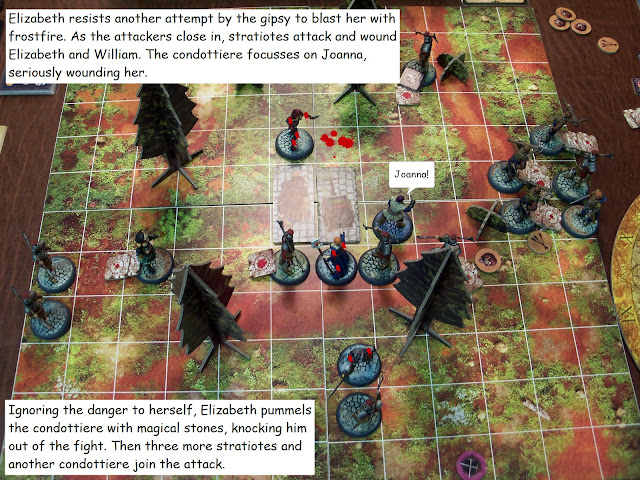 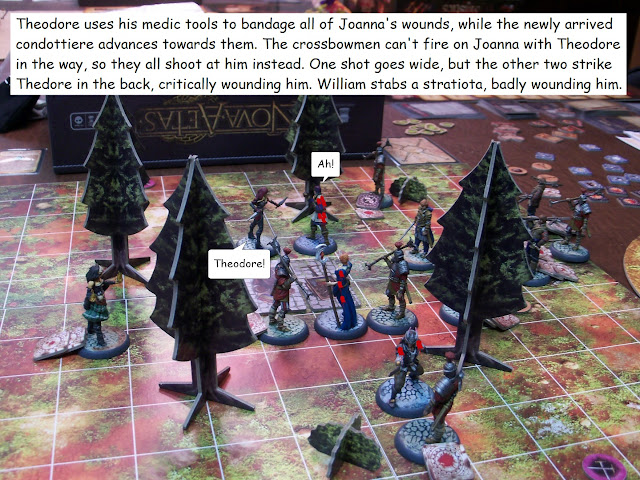 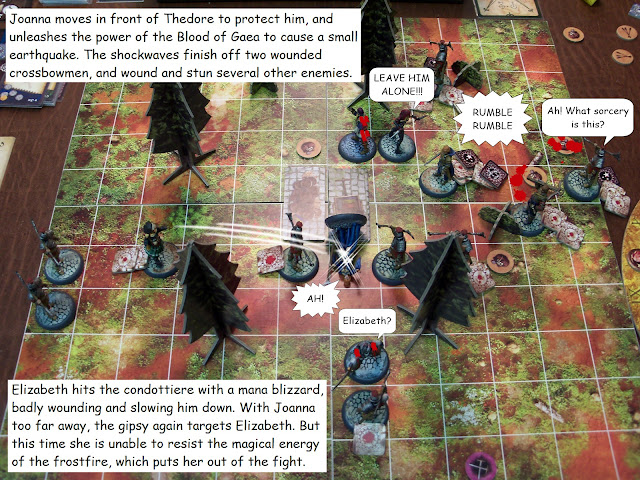 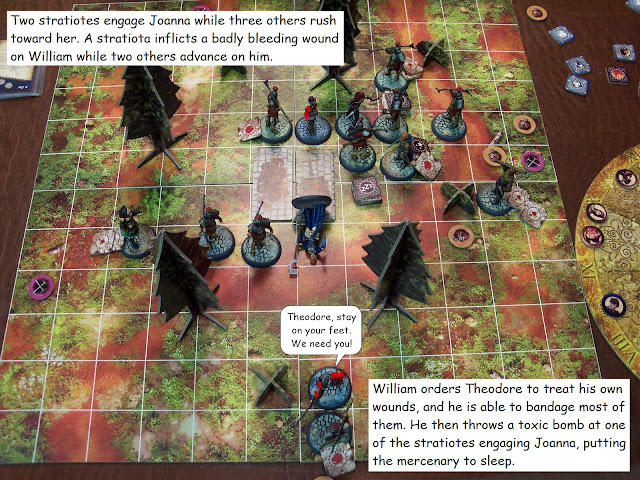 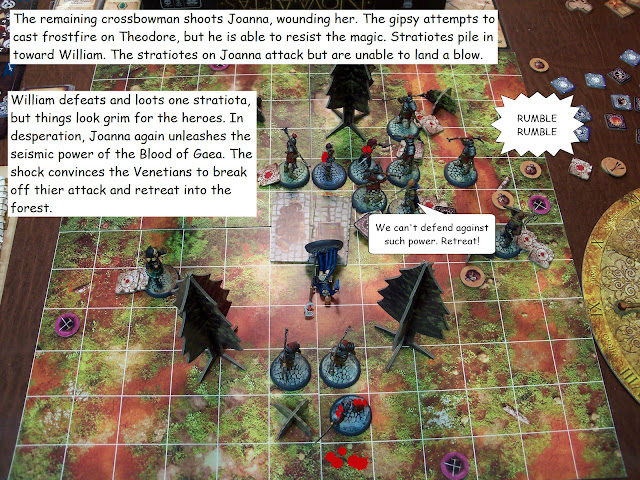 The heroes are able to tend to Elizabeth's wounds before they become critical and then escape into the night. They have defeated the Venetians, but in the chaos of battle an unlucky blow from one of them seems to have damaged the Blood of Gaea, or perhaps overuse has worn it out. Despite attempts to make it work, the artifact appears lifeless. The companions are disoriented by the event, but decide to get to Modena as soon as possible to escape new ambushes. Although the area seems under control of mercenary troops, the heroes decide to take the risk.

(NOTE: The next mission after a victory here involves the players being pitted against each other in a chess-like game, and since I am playing solo I didn't think that would work well. So I decided to proceed with the failure mission instead. I had already done the rewards for this mission, so I kept the rewards for a victory here, including no rest phase. However, I will play the mission that results from a failure, mission 2.3, without the use of the Blood of Gaea as if I had lost this mission.)

On their way to Modena, the mercenary companions work together to improve their skills. William practices rising in defense of his companions, so that he will be better able to protect Elizabeth from harm if he is close by. Elizabeth learns to cast a counter-spell, in case they run into another powerful spell casting gipsy. Joanna comes up with a novel way to distract her enemies's attention, by tossing a bag of loot, which she figures the mercenaries they will be facing won't be able to resist. Theodore gathers some herbs in the woods which he uses formulate some healing bombs, so he will have the option of healing a companion from a distance if he can't reach them in time.

The heroes are likely to need all of their skills in order to face the challenges that lie ahead of them.
Posted by Craig Welter at 8:00 AM